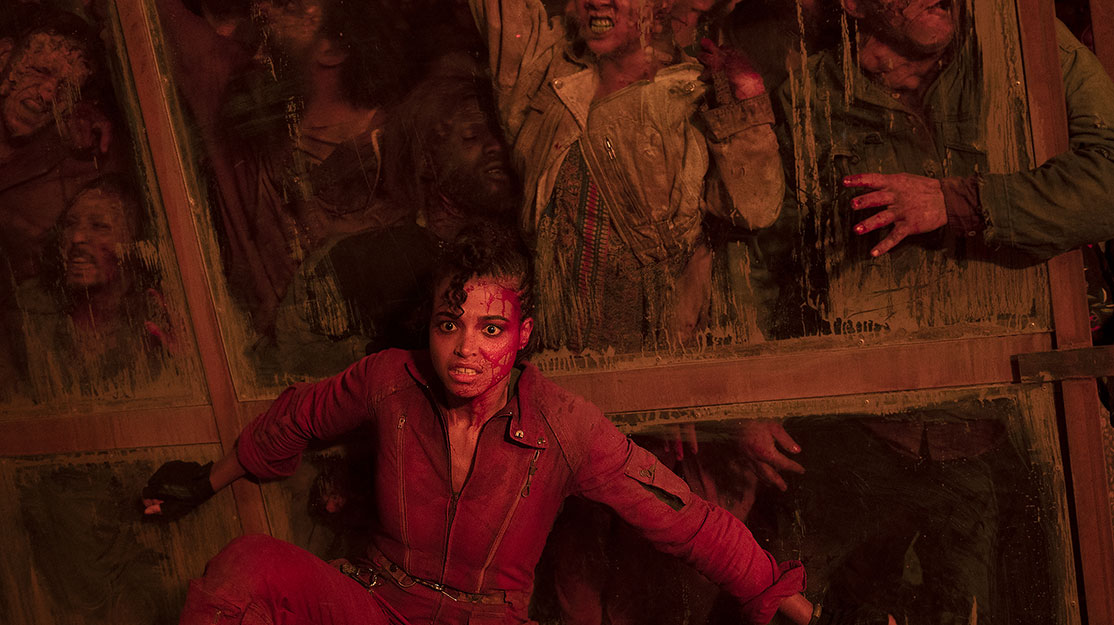 In Netflix series Resident Evil, Ella Balinska plays a survivor living in a world ravaged by a devastating virus and now populated by monsters. She tells DQ about starring in the series and why it will raise the bar for video game adaptations.

From live-action versions of Super Mario Bros, Street Fighter and Mortal Combat to Tomb Raider, Doom and Sonic the Hedgehog, films based on video games have proven to be big business at the box office.

Most notably, seminal survival horror game Resident Evil and its many sequels have inspired a six-film franchise  that began in 2002 – grossing more than US$1.2bn – as well as a reboot called Resident Evil: Welcome to Racoon City that hit cinemas last year.

Now, showrunner Andrew Dabb (Supernatural) has partnered with Constantin Film, the producer behind the original feature films, to bring a live-action Resident Evil series to the small screen for the first time. The eight-part story unfolds across two timelines, the first of which is set in 2022, when 14-year-old sisters Jade and Billie Wesker are moved to New Raccoon City, a manufactured corporate town they come to realise is not what it seems and where their father may be involved in concealing dark secrets.

The other timeline takes viewers to 2036. Fewer than than 15 million people are left on Earth, while there are six billion monsters – people and animals infected with the T-virus. Jade, now 30, struggles to survive in this new world as secrets from her past – about her sister, her father and herself – continue to haunt her.

Playing Jade in the future timeline is British actor Ella Balinska, who now lives in LA and previously starred in the 2019 big-screen reboot of Charlie’s Angels. As a fully fledged gamer, she was already familiar with the Resident Evil franchise when she read for the part at the end of 2020, and jumped at the chance to star in a show that was “completely different” from anything else on screen.

“It was fresh, it felt very current. Also, this is very much family-driven. Jade is a family woman first and foremost, and she’s unapologetically stubborn,” Balinska tells DQ. “She’s not a superhero; she’s not a specially trained zombie assassin. She’s a scientist and a survivalist. Every fight scene you see is genuinely her fighting for her life – and on top of that, I love that you love her and you hate her. There are decisions she makes that are very questionable, but it’s the best thing she can think of at the time, which is very human, and all that together really drew me in.”

As a fan of the games, the actor is also well placed to judge how faithful the series is to its source material. So it’s notable when she admits she was “blown away” by the way the world of the games has been recreated in screen.

“It’s insane. We walked onto set and you could clearly see everyone was so passionate about the franchise, from the colours to the way the DOP was shooting the POV where you’re looking around the room [an iconic element of the original game]. The monsters that are in it are also truthful to the history. You’ve got the Lickers [mutated zombies], you’ve got the Doberman [zombie dogs] – all those things are really important.

“It’s loyal [to the games], but if you haven’t played them, it’s something you can immediately fall in love with straight off the bat because it does obey a lot of the Resident Evil lore.”

In the present, Jades’s family’s connection to the mysterious Umbrella Corporation is explored, while in the future, she’s fleeing the ‘Zeroes’ (humans infected with the T-virus) in a race for survival while isolated from her family.

“She’s been away from her family for a long time, which is something I definitely drew a parallel with while shooting the show,” Balinska says. “A simple mistake lands her in an incredibly unfortunate, wild and thrilling series of events, while echoes of the past come back to bite her. There’s also the mystery of how we’re curing the T-virus, and what happened to her sister suddenly comes to the forefront.”

The actor found the role particularly exciting owing to her partnership with Tamara Small, who plays young Jade in the earlier timeline. “We didn’t even chemistry read [together],” she says. “We just immediately had the same vision for what the character is and who she is. But we had conversations of, ‘Hey, here’s a triggering moment that’s happening in my timeline for you to have in your arsenal for the future.’ That part working really closely with Tamara was really cool.”

Then there’s the supporting artists playing Zeroes. “They went through training camps on how to be Zeroes, which was insane,” Balinska says. “But when you were in it, you hear their noises and you see the physicality, it feels so real, honestly. The work that went on when we shot it in South Africa is something I’m really proud of.”

While the Zeroes were put through their paces before shooting, Balinska jokes that running for her life is part of her repertoire. “If there’s ever a Zombie apocalypse, just come over to my yard.”

Conversely, while early action scenes see Balinska’s Jade fleeing from hundreds of zombies or grappling with them on the ground, the actor almost had to forget a lot of the fight training she had learned for previous roles. “In the past, I’ve been quite good at learning very well-choreographed fight scenes and fantastic-looking action moments,” she says. “But Jade’s a scientist, a survivalist, and we wanted it to feel real. We wanted to each sequence feel like one of those moments where you don’t know whether the Game of Thrones character is going to live or die.”

Some ju-jitsu training was useful for tackling the Zeroes – played by actors covered in prosthetics, wearing coloured contact lenses and doused in fake blood and gore – but once filming began on dimly lit sets, “there was no way we could have made it intricate in any way,” Balinska notes.

“Everybody could barely see when we were doing all of these fight scenes. A lot of it was like, ‘There’s my friend running towards me. He needs to be on the ground over here by the end of whatever we’re going to do in the middle.’ So it was very real. It was safely conducted but very real.”

When she wasn’t being chased by dozens of extras, Balinska could often be found acting against a tennis ball on a stick, which would later be replaced by a horrifying monster in post-production. “I don’t think they would have been able to find a giant spider, and I wouldn’t want to work with it regardless,” Balinska jokes.

The actor’s preparation was aided by her recent work playing protagonist Frey in Forspoken, an upcoming video game, setting her up for playing against green screens for Resident Evil. “There were absolutely no props, no background, no costume,” she says of working on Forspoken. “It’s just you with all the dots on your suit. And in that game, there are dragons, there are bright beasts, there is so much, and it was a good practice run for getting so into character that nothing else matters apart from just discovering each moment in the most authentic way.

“Honestly, that’s the closest thing you can do to living the truth of that moment, which is a delight because it’s not often you get to do crazy things with giant caterpillars. It’s really cool.”

However, Balinska says she was actually shocked at how little green-screen filming she ended up doing on Resident Evil, with the production opting instead to build sets or venture out into Cape Town at a time when the streets were largely still deserted due to the Covid-19 pandemic.

“We were on location pretty much 90% of the time in my timeline,” she says. “We had Cape Town’s town centre turned into a remote version of [London’s] Oxford Street. The art department did such an incredible job. It was quite literally unreal.”

Behind the scenes, Balinska also wanted to make sure she could help ensure each day was completed as seamlessly as possible. She would often ask for a breakdown of the shot list so she could prepare in the right way, or know how to pace herself for what was to come. She would also try to keep morale high among her fellow cast members, which include Lance Reddick (Albert Wesker), Siena Agudong (Billie Wesker) and Paola Nuñez (Evelyn Marcus).

“It’s very easy to go to for the director to just yell ‘Just one more. We’re going to do one more,’ and the energy can kind of dwindle. But if I have a general idea of how to pilot the ship, it makes the day roll faster and it solves a lot of problems before they even arise,” she says. “Then without overstepping my role as an actor, if there are any problems you do see on set, I can help the day go by faster so that we can get in all the shots we need. That’s my contribution to it anyway.”

With Resident Evil launching on Netflix tomorrow, Balinska describes it as a “fantastic, fun, exciting, thrilling and sometimes horrifying adaptation of a beloved franchise” that will appeal to gamers and non-gamers alike. She also believes the show is ripe for Stranger Things fans looking for their next monster fix.

“It has that pace, it has that rhythm, it has these characters you want to love and you want to hate,” she says. “We had a great time making it, and if you want your fix of crazy monsters and extraordinary situations, this is the show.”