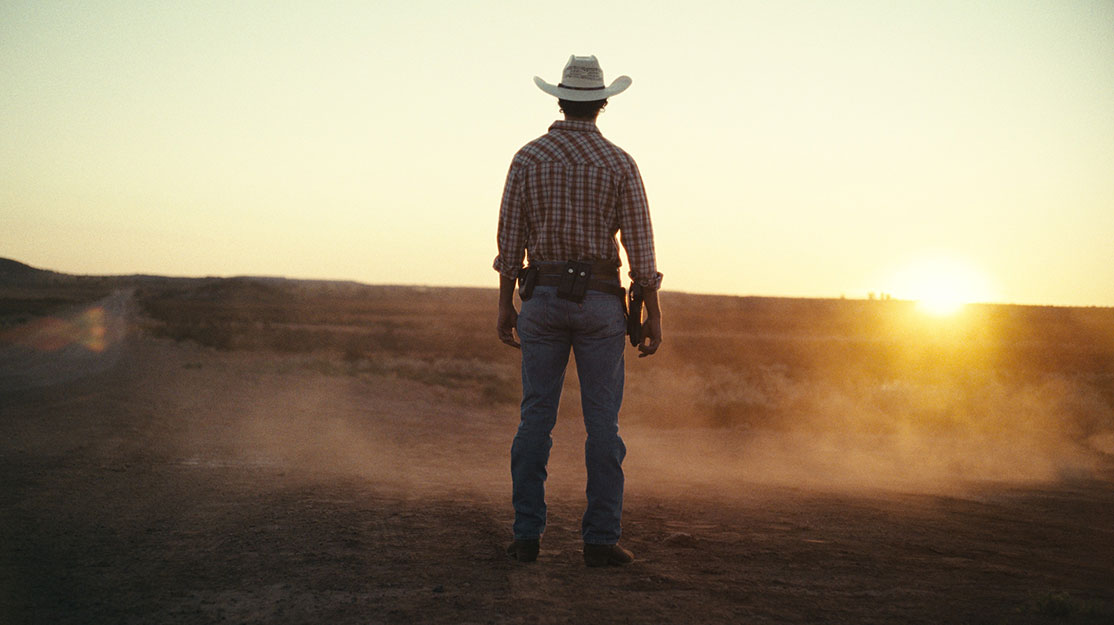 Mystery Road: Origin will take viewers deep into the Australian outback to tell the origin story of Detective Jay Swan. Producer Greer Simpkin tells DQ about filming in some of the most remote locations on Earth.

Beautiful, unforgiving, vast and foreboding. There can be few locations around the world as versatile on screen as the Australian outback, from stories about flying doctors and amnesiacs searching for answers to unlikely road trips and serial killers on the loose.

Producer Greer Simpkin is more familiar than most with filming in this unique landscape, having worked on films such as Sweet Country and Jasper Jones and the first two seasons of TV crime drama Mystery Road, a small-screen follow-up to Ivan Sen’s film of the same name and its own sequel, Goldstone, which she also produced.

The Mystery Road series, made by Bunya Productions for local broadcaster the ABC, has taken Simpkin from locations such as Wyndham, at the northern tip of Western Australia (WA) for season one, to Broome, 1,000km further west, for filming on season two. The latest entry in the franchise, prequel Mystery Road: Origin, has led her further south to the WA towns of Kalgoorlie and Coolgardie, around 600km east of Perth.

“The kind of places we go in the Mystery Road series, you are in the elements,” Simpkin tells DQ. “We had dust storms, we had 55kph winds, it rained, it was really hot. But actually, it’s just made the series more dramatic.

“The first two seasons were shot in the ‘Top End’ [of WA]; you shoot in July and it’s beautiful blue sky every day. It’s just incredible. But Origin was further south, so we were faced with a few more elements to deal with. But we got it done and it looks absolutely beautiful.”

Set in 1999, before the events of the films or previous seasons, Mystery Road: Origin introduces Constable Jay Swan, a charismatic young officer who arrives at his new station. Fresh from the city and tipped for big things, Jay may be a new officer but he’s not new to this town. His estranged father Jack lives here, as does the woman who will change his life forever, Mary.

“It’s actually been really satisfying to go back and look at Jay Swan’s origin story,” Simpkin says of the detective who first appeared on screen in 2013. “Audiences really love the character embodied by Aaron, but it’s really great to have gone back to 1999 and show how that character became the justice-seeking, slightly taciturn outback detective he becomes.

“We’ve also done the origin story of the gun. Jay has this Winchester gun, even in the feature films, and when that gun comes out, he means business. For those viewers who have watched the whole series, that’ll be really satisfying.”

Though there is a new cast, Mystery Road veterans Blake Ayshford, Steven McGregor, Kodie Bedford and Timothy Lee have returned to write the script. It is once again produced by Bunya Productions and distributed by All3Media International, while there is also continuity behind the camera in the form of director Dylan River, the son of director Warwick Thornton (Sweet Country, Mystery Road S2), and DOP Tyson Perkins, whose aunt is director Rachel Perkins (Total Control, Mystery Road S1).

“It’s like we’ve handed the baton over [to the next generation] and it’s been really beautiful,” Simpkin says. “Mark playing Jay Swan has done an incredible job. It’s difficult for actors to play a role that’s already so well established as younger, and he’s done it beautifully, as has Tuuli, who plays the young Mary. I have great hopes for young people in the film industry if these these guys are anything to go on.”

River, she says, been able to bring his own style to the series while also keeping it in line with the films and series that have come before. “We just talked about landscape. We’re seeing it how Jay Swan sees the world,” Simpkin notes. “Dylan is a First Nations young man from central Australia. He grew up in Alice Springs and he’s brought some of his experience of looking at a town in the middle of the desert and how he looks at country to the way he’s shot it.”

That landscape belongs to Kalgoorlie, which Simpkin says epitomises the western genre more than any other location she has ever filmed. At one time during the Australian gold rush, it was a thriving, wealthy town of more than 100,000 people, with impossibly grand buildings.

Now the town is a lot smaller, “so there’s a kind of faded grandeur about all of that and a kind of emptiness,” Simpkin says. “Coolgardie was a town where gold was found and it, too, has really grand buildings, but very few people live there. There’s this emptiness that just feels to me like the western genre. That’s also a point of difference compared with the other two seasons [of Mystery Road].”

As producers, Simpkin and her Bunya Productions partner David Jowsey work closely with the director to find the right locations. In season one, they were keen to visit Kununurra, east of Wyndham, where they could find mountains for the show’s cattle ranch setting.

Season two was then written for Broome, a coastal town where the aqua blue ocean meets red-soil desert known as pindan. Then with Origin in mind, they scouted other towns in WA before falling in love with Kalgoorlie. The production also makes use of the vast mining ‘super pit’ that sits beside Kalgoorlie, as well as nearby salt lakes.

“There’s a desolate house, which is very reminiscent of one we used in Goldstone. There are quite a few salt lakes, which are incredible,” Simpkin says. “There’s the grand buildings – and there’s tunnels, which miners would often use to come into the pubs, have a drink and then go back down. That’s a very different perspective that you’ve never seen before.

“We’ve still got a cattle station, and roadhouses in the middle of nowhere where you get petrol and you can buy food. In Australia, there are also road trains – big trucks, they’re huge – and we’ve got a really huge one in this season.”

Of course, logistics play a major part in filming in an extremely isolated part of the country, not least when it comes to supporting the cast and crew. Mystery Road: Origin was shot over 10 weeks from October to December last year, with key crew on location eight weeks earlier to complete pre-production.

“That’s a long time in the desert and it took an enormous amount of planning to get the couple of hundred people we needed to get into Kalgoorlie. It’s a military operation,” Simpkin says. “We’ve got to drive our trucks, the make-up trucks and everything, from Sydney or from Queensland, thousands of kilometres, so it really is a big production in that respect.

“But we’re lucky. Many of the team have come back across three seasons. The WA crew we’ve used have been really good. It was just a little bit more restrictive this time. We couldn’t get everyone in who we wanted to because of [Australian state] border restrictions, but that’s just one of the vagaries of production in a Covid world.”

The team also includes a large number of Indigenous actors and crew from the surrounding areas, and Simpkin says a lot of consultation work was done with local Indigenous communities before production began.

“The local Indigenous people always very graciously welcomed this big crew onto their country. It’s an honour and a privilege, and I feel very lucky to have had the career I’ve had working on all these projects where you are going into people’s communities,” she says.

Over the years, Simpkin has learned numerous lessons about the challenges that can arise when filming in the outback. One of them, she says, is how dangerous it can be to drive at night, when cattle, kangaroos or occasionally wombats can be on the road.

Filming in areas with poor mobile signal can also create communication problems, so satellite phones are a must.

“What you have to consider when you shoot in Australia is you can be a long way from anywhere,” she continues. “For the film Goldstone, Ivan Sen decided to choose a location where there was no mobile phone reception, no internet, no fuel, no water. We had to ship it all in and we all lived in tents for six weeks.

“It’s not for the faint-hearted. But what I’m amazed about, and just how great crews are, is when they come and work on shows like this, they believe in the director. They believe in what the series has to say. They put up with some interesting conditions and they come and do it over and over again. It’s not always easy.”

Set to debut later this year in Australia, Mystery Road: Origin continues to deliver the breathtaking backdrops viewers have come to expect over the previous two series, and Simpkin is hoping to do it all over again with a possible second season featuring the young Jay Swan. But while shows set in the outback often deal with themes of isolation and alienation, that couldn’t be further from the truth off camera.

“That sense of isolation is often really palpable, but behind the scenes, we like to create a family, the Mystery Road family – people who have been on the journey with us for a while. There’s a beautiful loyalty that comes out of that, and a shorthand, so when you are out in the middle of nowhere, there’s still a sense of camaraderie. I’m still blown away by how many people we work with, whether it’s the vehicle wrangler or the animal wrangler, the horse riders or the people who welcome us into their towns. It’s a huge thing.”