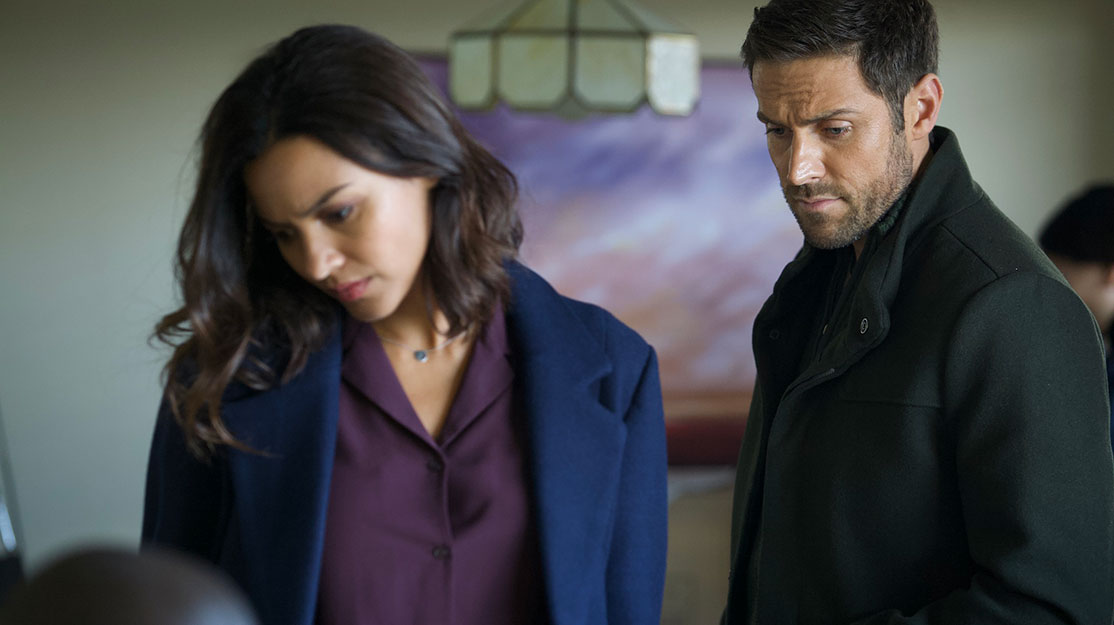 Music to die for

Canadian police procedural The Murders puts music front and centre as a detective tries to make amends for the mistake that led to a colleague’s death. DQ speaks to showrunner Damon Vignale.

Since it was first released by Lefty Frizzell in 1959, country ballad Long Black Veil has been covered by performers including Johnny Cash, Nick Cave, Bruce Springsteen and Rolling Stones frontman Mick Jagger.

Sixty years later, it is now set for another outing in Canadian crime drama The Murders. But the song doesn’t simply provide the soundtrack to the opening episode – it plays a pivotal role in the plot.

In fact, Long Black Veil was the origin point for the whole series, owing to the fact it is described as a ‘murder ballad,’ a song that describes a killing. In this case, the lyrics tell a story from the point of view of an executed man falsely accused of murder. He refuses to give an alibi due to the fact that, on the night of the killing, he was sleeping with his best friend’s wife and would rather die than admit the truth.

“Something about it just led to me thinking, ‘Wouldn’t it be interesting if there was a serial killer who was marrying music to his crimes?’” says showrunner, creator and executive producer Damon Vignale. “So the first episode essentially opens with that exact storyline. We have a character who’s accused of murder, he’s brought into the police station and his alibi proves false. As they investigate, they realise he was with his best friend’s wife. So he’s cleared but he ends up dead and they find a song on his cellphone that was texted to him, and it’s Long Black Veil.”

That became the launchpad for music to play a key role in each episode, with a different song used each time to tie into the theme of that particular story. And it certainly makes for a different type of crime drama.

Solving the crimes is rookie homicide detective Kate Jameson, played by Jessica Lucas. Set in Vancouver, the episodic case-of-the-week drama follows Jameson as she searches for redemption in her investigative work after her negligence causes a tragedy. In the pilot episode, Jameson partners with Detective Mike Huntley (Lochlyn Munro) as they navigate the case of a mysterious serial killer who uses music for destructive ends. The first episode also introduces a serialised story that will run across the eight-part season.

The series is produced by Muse Entertainment for Canada’s Citytv and distributed by About Premium Content. NBCUniversal International Networks has already pre-bought the series for its channels across Europe and Africa.

The Murders opens with Kate, the daughter of a homicide detective and an ex-lawyer who is now running for mayor. Justice runs in her blood. So when she leaves a gun in her car and it ends up being used in the murder of her partner, events spiral out of control.

“I just thought it would be really interesting to have a character who is all about being the best cop she can be and right out of the gate there’s this big stumbling block that could ruin her career,” Vignale says. “How does she navigate that and what guilt does she carry with that throughout the series? She does carry this feeling of responsibility, this failure that she’s responsible for her partner’s death, and is constantly trying to find retribution in her cases.”

The show also explores Kate’s familial background. Vignale says she was written as a biracial character – her mother is caucasian, her father is black – because that’s the showrunner’s own background. “There’s often a dialogue about black and white but I rarely hear stuff talked about in the grey area, where you’re not white, you’re not black, you’re just living your life. I thought it would be interesting to explore that in this character,” he continues. “We don’t go heavily into it but we certainly don’t shy away from it.”

In casting Kate, the production team sought out Lucas, who Vignale says was ready to step into a lead role after stints on Gotham and Gracepoint. “There’s a list of actors who are at that place in their career where they’re ready to take the lead of a show and we felt pretty strongly that Jessica was at that place where she can carry a show. You don’t know until you get in there and start working and looking at the edits, and she is strong. I’m really pleased. She really is the face of the show and carries it. I’m really excited for people to see it.”

The Murders marks the first time Vignale has taken up the showrunner role, having watched and learned from others including Simon Barry (Ghost Wars, Continuum), Dennis Heaton (Motive) and Bruce Smith (19-2). While juggling duties in the writers room, on set and in the edit, he sees the biggest part of the job as setting the tone in terms of both the story and in production.

In the writers room, “we really start on plot,” Vignale says. “Once we have that, we start to look at what themes we can use that relate to our characters. So that our characters and this plot are now working together. Those things are at the forefront for me. Then of course, you want really great twists and misdirects, you want to surprise people, and we do try to put our investigators in a bit of danger. Then the crime drama gets across into that thriller aspect, which I think is exciting and I try to push into a show as much as I can.

“A lot of the time it’s just about inspiring the best in the work and in people, which can be a challenging endeavour,” he continues. “Simon told me there’s going to be a lot of noise, and what you have to decide is what you’re going to listen to and what you’re not. What he suggested is you focus on your writers, directors, actors, editors and the music. You focus on those things because when you watch the show, they all have to do with what you see and hear. So put all your attention there and just hire great people and let them to do what they do.”

That being said, as a showrunner, “you really are thrown into the middle of a circus,” Vignale admits. “There are jugglers and people on the high wire. It really does feel like that, and you’re trying to make it all work and flow so the audience has a good time.

“There’s always a challenge around budget. A cop show costs money and, to make it real, you need cars, police, a corner van. You need all the stuff that goes with that. It’s a balance so when you watch the show it feels big but, at the same time, you’re driving the story through it so it’s achievable in production.”

Ahead of The Murders’ launch on Citytv today, Vignale is already developing scripts for a potential second season. Should he get the green light, he already has a plan in place for a five-season run, with each season exploring themes around one of the five senses. If season one is about sound, season two would look at touch and so on.

In a television landscape where crime dramas still dominate and hunger for episodic procedurals has been overshadowed by trends for binge-watching and serialised storylines, The Murders and its musically themed plots will likely have viewers singing for more.