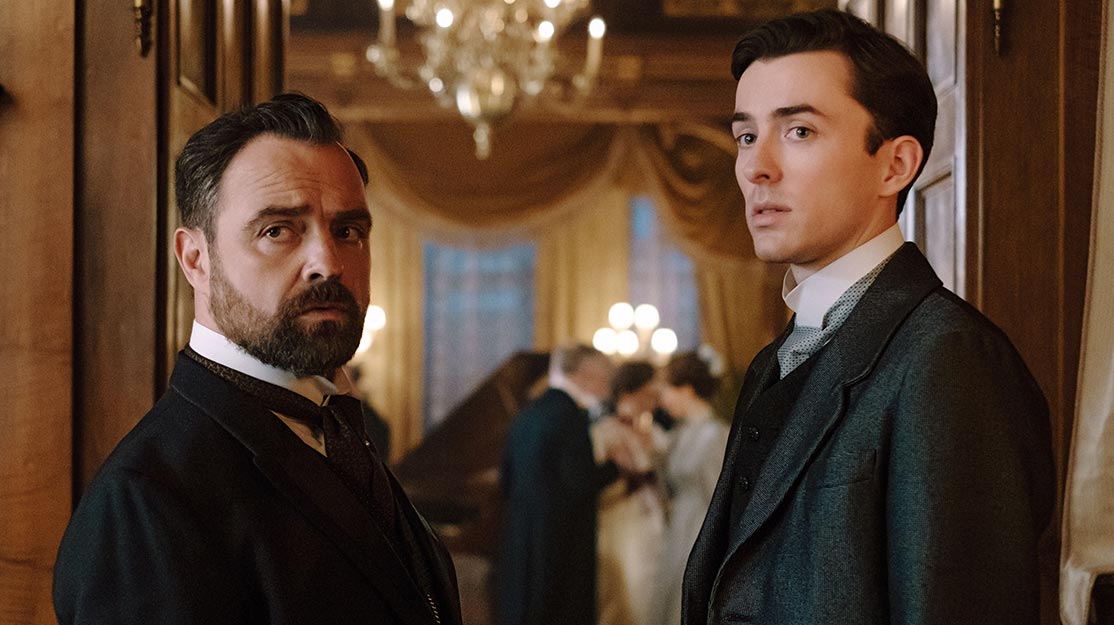 Period crime drama Vienna Blood stands out as a unique European project, an adaptation of Frank Tallis’s novels that has been produced in English for German and Austrian broadcasters. DQ finds out more.

As a member of the writing team behind Sherlock, the television version of Sir Arthur Conan Doyle’s iconic character starring Benedict Cumberbatch, Steve Thompson has form when it comes to adapting detective novels.

His latest series, however, proved to be quite a different challenge. Vienna Blood, based on the Liebermann novels by Frank Tallis, sees a brilliant young English doctor – studying under famed psychoanalyst Sigmund Freud – partnered with a police detective who is struggling to solve a perplexing murder in 1900s Vienna.

Matthew Beard (Kiss Me First) plays Max Liebermann, who is keen to understand the criminal mind and begins to observe Detective Inspector Oskar Rheinhardt (Juergen Maurer, M: A City Hunts a Murderer), who is under increasing pressure to crack his latest case. Max’s extraordinary skills of perception and forensics, and his deep understanding of human behaviour and deviance, then lead Oskar to resolve Vienna’s most mysterious cases.

“They’re very different shows but they both hang on an iconic character,” Thompson says of Sherlock and his latest series. “The thing about Sherlock was you just wanted to hang out with the guy. For all that he was a high-functioning sociopath and was rude to just about everybody he met, you still wanted to be his mate.

“You want to hang out with Liebermann, too, because although he’s arrogant and thinks his way is the best way, he’s still very passionate, brilliant and charismatic. Our version of Sherlock was deliberately modern and used technology, but Vienna Blood is a very rich period drama that celebrates everything about that period.”

Shot almost entirely on location across the titular city, Vienna Blood’s every scene is soaked in the atmosphere of the period. It’s an important ingredient that Thompson took from Tallis’s novels, which are “phenomenal” at depicting the era.

“They’re just dripping in detail,” Thompson says of the books. “They’re so incredibly rich. It takes about two lines before you think, ‘This guy has actually been to Vienna.’ This is an incredibly vital time in the history of Vienna. So much was changing: this was the birth of modernism, and the clash between the modern and the old cultures was happening not only in medicine and psychology but also in music and art and architecture. That clash and richness of culture Frank sums up so beautiful in the incredible detail of what he writes.”

The initial challenge the writer faced was condensing Tallis’s lengthy novels, with the series comprising three feature-length films each based on different stories. Thompson describes the source material as an “embarrassment of riches,” noting that his task was really deciding what to leave out.

“We learn a lot more about them [the numerous characters] in the novel so it’s really about stripping back, which sounds like a brutal thing to do but it has to come down to the spine of the relationship between those two central characters and the investigation,” he explains. “It’s enormously challenging. Obviously there are different stories [to include] because we’re telling Max’s personal story as well as the story of the investigation, but part of the challenge is weaving those threads together and keeping those story threads very tight.”

In the first film, The Last Séance, Max first joins Oskar to assist in solving the murder of a female medium, whose death suggests supernatural powers are at work – the door is locked from the inside and the bullet that killed her has vanished. But with Oskar under pressure to secure an arrest, Max’s intervention couldn’t be less welcome, at least at first.

“From the beginning, you need the development of their relationship. If they meet each other and say, ‘Oh, great,’ that would not be very spicy for the story, so it’s normal and logical that he’s disturbed in his work by a young dandy showing up,” explains Austrian actor Maurer, who worked with a voice coach to improve his English. But as Max proves valuable with his Freud-influenced theories, Oskar begins to view his sidekick as an asset. “That’s how the story develops – the chemistry between the two main characters is very beautifully written by Steve, so we just had to follow that path. Matt and me, we worked together quite well.”

For Max, his developing interest in Freud’s theories may help his police work, but as he delves deeper into the minds of criminals, he puts his own mental health at risk as well as his relationships with those closest to him – girlfriend Clara (Louise von Finckh), father Mendel (Conleth Hill), mother Rachel (Amelia Bullmore) and older sister Leah (Charlene McKenna).

“It’s not very interesting playing a know-it-all if they don’t have some kind of flaw, so I was intrigued as to what it would be and that gives a clue as to where we’re going,” Beard says of Max’s deepening fascination with the criminal mind. “Perhaps taking an academic approach to other people’s psychology and other cases is no bad thing, but when you start to apply an academic approach to yourself and your own close relationships, maybe that’s not particularly helpful and not what your girlfriend wants to hear when you start psycho-analysing her. So we start to see where that goes, and that was definitely a big pull for me.”

In a unique commissioning setup, Vienna Blood was ordered by Austria’s ORF and ZDF in Germany, with UK prodco Endor Productions partnering with MR Films to make the drama in the English language. Red Arrows Studios International is distributing, with BBC2 picking up the UK rights and launching the series on Monday, November 18. It will then launch on ORF and ZDF with German dubbing under the title Liebermann.

Beard, who is interested in psychology and had done his own research into the subject before filming began, says one of the most exciting parts of the job was working with a largely Austrian and German crew. “It was always going to be such an interesting challenge and I love that. Working with Juergen was an absolute highlight but then, every now and again, this care package would be sent in from home in the shape of my [screen] family and I was given a mum, a dad and a sister. It was so exciting.”

Thompson says the relationship between Max and Oskar is key to the series, with their friendship growing across the three episodes, while viewers will also see more of Oskar’s own family. “They become great buddies,” he reveals, “and it becomes a very warm relationship. They’re people we want to hang out with. That’s right at the heart of it.”

With seven novels in Tallis’s series, there is scope to return to Vienna Blood, especially as the demand for crime drama around the world continues to prove insatiable. Thompson says the show has both the plot and the characters to be a success, and believes its Viennese setting will add an extra layer of intrigue and fascination, with the setting providing a mesmerising backdrop in the hands of lead director Robert Dornhelm.

“You watch crime dramas and think, ‘Oh my God, that’s so brutal. I’m glad I’m not there.’ But that’s never how you feel about this. You watch this and think, ‘I would give my right arm to be transported to Vienna in 1906, just for five minutes,’” Thompson adds. “Though parts of it are very dark and terrifying, parts of it are exhilarating to experience. In episode one, there’s a magnificent rooftop chase, and to run across the rooftops of Vienna was quite something. Just to see the labyrinthine parts of the city that nobody had seen for decades was really exciting.”