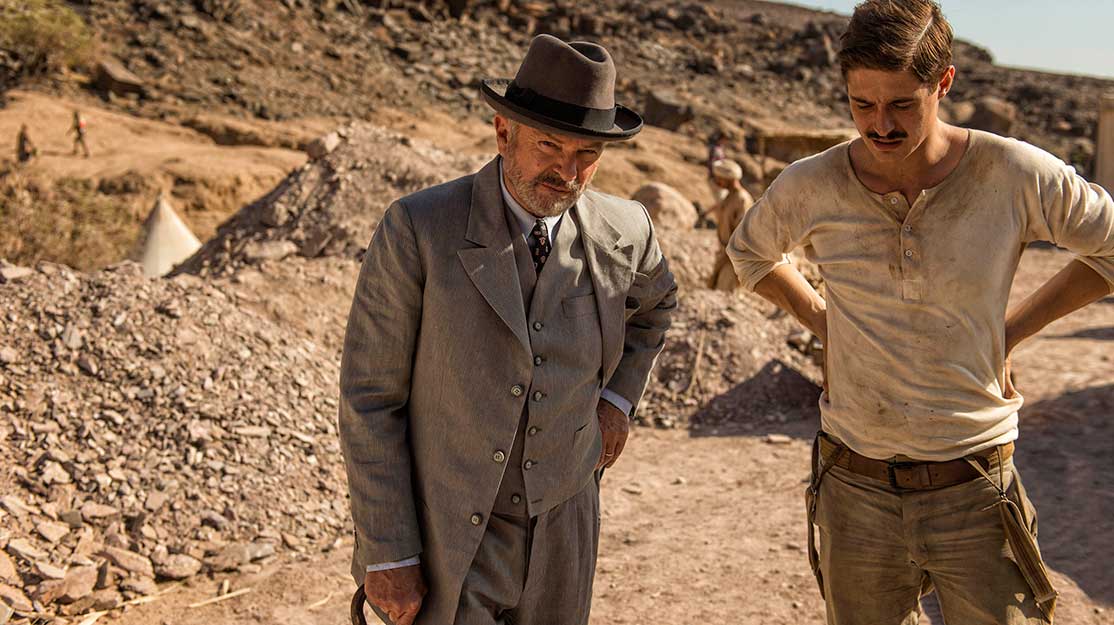 Guy Burt explores the discovery of the boy king’s tomb in four-parter Tutankhamun. DQ speaks to the writer and the show’s executive producers about retelling this famous story for a new audience.

As you might expect from its title, Tutankhamun is a historical series set in Egypt. But the four-part period piece might also be the unlikeliest buddy drama of the year.

Rather than the boy king himself, Guy Burt’s screenplay focuses on British archaeologist Howard Carter – the man who would become world famous with the discovery of the pharaoh’s tomb on November 4, 1922 – and his partnership with aristocratic benefactor Lord Carnarvon.

The story opens as the hot-headed Carter’s licence to dig is revoked by Cairo’s Antiquities Service. He then spends years ostracised, forced to sell ancient relics to buy food. But a chance meeting with Lord Carnarvon brings a change of fortunes and they begin an unlikely friendship that leads to the discovery of Tutankhamun’s tomb – against all odds and at great personal expense.

Max Irons and Sam Neill star as Carter and Carnarvon (pictured above left and right respectively) in the series, which is produced by Simon Lewis, directed by Peter Webber and executive produced by Francis Hopkinson and Catherine Oldfield for ITV Studios. ITV Studios Global Entertainment is distributing the show worldwide, with SBS in Australia having picked it up already.

Burt admits his inner eight-year-old quickly agreed to write the series when he was first sounded out about the project. “A lot of enthusiasm probably came through on the page because it is something I was obsessed with as a kid,” he says. “I think everybody knows the story a bit, and it’s a magical tale. It was a no-brainer.”

The writer, whose credits include The Bletchley Circle, The Borgias and Jekyll & Hyde, spent many hours researching Carter through the archaeologist’s notebooks and material from digs, as well as his personal archive at Oxford University’s Bodleian library and its centre of Egyptology, The Griffin Institute.

“As far as we could, we wanted to stay true to the history,” Burt explains. “The only significant piece of artistic licence is the portrayal of the romance between Carter and Lord Carnarvon’s daughter Evelyn, which is one of those frustrating bits of history that is hinted at but nobody quite comes out and boldly states it – or at least when they do, historians argue about whether it’s true.

“In my mind there is one letter in particular from Carnarvon to Carter that doesn’t really make sense unless there is some kind of love interest. So the tricky bit for us was just threading our way through the history, making sure we were as accurate as we could possibly be while at the same time telling a story that is gripping as a quest for both treasure and love.

“It’s a fascinating, weird story, full of all the things that writers dream about getting into their scripts – reversals of fortune and moments where you think everything is coming right at last, only to have the rocks pulled out from under your feet. Those are the sort of things you usually craft in the course of a narrative, but here they actually happened.”

Burt says he had a vivid picture of the show during the writing process but admits he has learned to scale back the number of notes he includes in his scripts. “You don’t want to alienate your director by telling them their job,” he explains. “I used to write scripts that were pretty fastidious in terms of what I wanted the camera to do and it took me a while to realise you shouldn’t do that.

“But Tutankhamun is surprisingly close to what I had imagined. The set design nailed it completely. The thing you always have to deal with is the actors don’t tend to look like people you’ve got in your head. So that’s always a bit of a surprise but that’s true on every project. So I have twin Carters and twin Carnarvons – the guys who were with me when I was writing and those on screen. What we got in the end was really impressive.”

Unable to film in Egypt itself due to insurance reasons, the series settled in South Africa where almost all the interiors were built and, most importantly, The Valley of the Kings was recreated.

“This is a production built on the production design department,” admits Oldfield. “They did a fantastic job for us. We couldn’t send a camera to the valleys to get some establishing shots, so they recreated the Valley of the Kings in this abandoned valley on the Namibian border in searing heat. Everything had to be shipped up there – it’s eight hours drive from Cape Town – but we got most of the extras from Springbok, which is only an hour-and-a-half away. On one day of shooting, there was a cast and crew of 350 people out there in the middle of nowhere.”

From the start, Hopkinson says he was adamant Tutankhamun should not be a “pretty period drama” and was encouraged by director Webber’s ambition that viewers should feel the dust and dirt inside the tomb.

“When we talked to Peter, he wanted it to feel quite claustrophobic and hand-held in the tombs and then he wanted to show more scale outside,” he explains. “He was very keen to make it look like old photographs where the colours are slightly faded. Because he’s got a lot of experience in cinema, he gave it the scale and sweep you’ve got to have in a show like this. That’s why we wanted Peter to do it.”

Burt adds: “The valley shots among the workers [uncovering Tut’s tomb] are all done with handheld cameras; they’re quite unsteady and there’s a lot of dust. But the Cairo moments when you’re in the big, old, established buildings are all very steady and framed. There’s a clear pattern to how things are divided. [Webber] also had clever ideas for inside the tomb, never letting the camera lens look back past where the wall would have been. So although you’re flying walls out in order to get your crew in, there’s still that sense of claustrophobia because the lens never pulls out. It’s like you’re in there with them, and it was tremendously gratifying to see that level of precision and skill brought to it.”

With a budget boosted by tax breaks and a drop in the value of the South African rand, Hopkinson says there was more than enough money to ensure Tutankhamun carried the production values now expected of television series.

“I remember the producer ringing me up and telling me that, for just one day of shooting, the designer had built two streets on an old borstal in the outskirts of Cape Town,” he recalls. “He said, ‘I’m just going to warn you we’re building two whole streets for a handful of scenes we’re shooting.’ I just asked if we could afford it and he said yes. It was amazing. This story had to be done with scale. People also expect that now from television – for something like Tutankhamun, you need the scale and production values that cost money. It looks fantastic.”

That’s not to say the production was without some unique challenges – namely a risk assessment that was 40 pages long and led to three ‘scorpion wranglers’ being on set. Amy Wren, who plays Evelyn, was even hospitalised for 24 hours after being bitten by a spider.

“It sounded awful,” Oldfield says of the set. “It’s got spitting cobras, mambas, snakes, spiders, scorpions that will kill you. Every morning when you get up you have to shake all your clothes and hit your shoes together before you do anything. You have to check under your pillow and throw the sheets back to make sure there are no snakes in the bed. They were finding them every day and then moving them to a valley elsewhere. And the heat – I’ve never experienced heat like it.”

Once the biggest news story in the world, the discovery of Tutankhamun’s tomb is a story that still has the power to captivate – but how does this new dramatisation hope to attract viewers? “Tutankhamun is a name that will immediately attract people,” says Hopkinson. “I’ve been surprised how many people suddenly admit they are obsessed with Tutankhamun. Our head lawyer, who doesn’t usually do compliance of scripts, said he’d like to do this one because he remembered going to the Tutankhamun exhibition at the British Museum in the 1970s. So there are lots of people who are fascinated by the story, and it also has immediate recognition internationally.”

Burt adds: “We’re hoping we can lure an audience in on the promise of treasure in the sand, but by the end of the first episode I hope they will be watching for Howard Carter and he keeps you going through it all.”