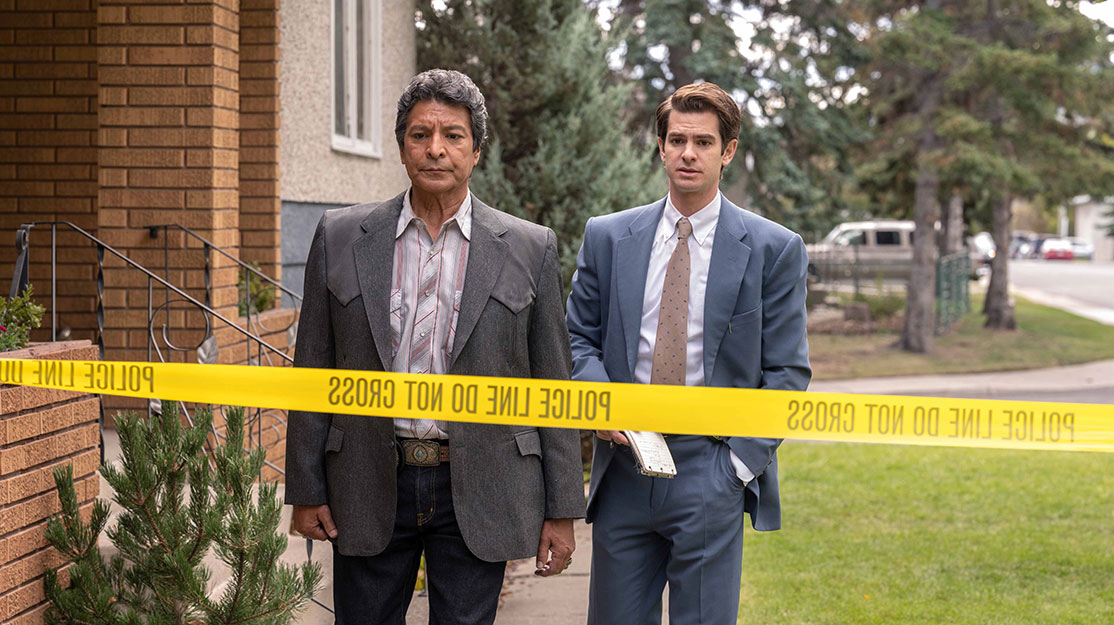 Dustin Lance Black, creator and showrunner of Under the Banner of Heaven, discusses how this long-gestating project came to television, the influence of his own upbringing and why the show offers a new perspective on true crime.

For 10 years, Oscar-winning screenwriter Dustin Lance Black sought to bring an adaptation of Jon Krakauer’s true crime book Under the Banner of Heaven to the screen.

But when Black found a feature-length running time too restrictive for the expansive story he wanted to tell, he transformed his work into a seven-part television series.

Following its debut in the US on Hulu earlier this year, Under the Banner of Heaven is now set to launch on Disney+ in the UK and Ireland on July 27.

Produced by FX productions, the series concerns events that led to the 1984 murder of Brenda Wright Lafferty (played by Daisy Edgar-Jones) and her baby daughter in a suburb in Salt Lake Valley, Utah.

As Detective Jeb Pyre (Andrew Garfield) investigates what happened within the Lafferty family, he uncovers buried truths about the origins of the LDS (Latter-day Saints) religion and the violent consequences of unyielding faith. What Pyre, a devout Mormon, unearths leads him to question his own faith.

Here, Black discusses his approach to adapting Krakauer’s book and how he was influenced by his own upbringing in a Mormon family, blending fact and fiction and how the series takes the true crime genre in a new direction.

Why did you want to adapt the novel and what was your approach?
I read the book when it first came out. What drew me to it was my own upbringing. I grew up a devout Mormon, with a single mum who was, as we say, a seven-day-a-week Mormon, so we would go to church six days a week. The seventh day was at home. I just started, at a certain point, asking questions about the church, particularly around how the church seemed to be treating my mother.

Then when violence visited my home, I was deeply concerned with how the church dealt with it. I started to wonder why women were being treated as less than men because I did not see my own mother that way, as she was equally as capable as, if not more capable than, the men in my life.

Those were just dangerous questions to ask, and what I found out is the Mormon church, particularly at that time, did not want people asking questions. Then about 20 years ago, this book came out, Under the Banner of Heaven, that had an abundance of answers – things that are not discussed in church, things we’re told not to look into as Mormons.

It’s more complex than a binary good or bad. I loved the church I grew up in. I valued its focus on family, community and doing good for your neighbour. I did not know where those rules came from. I did not know my history. I came to learn that if I just followed along without asking questions, the truth of the matter is that by following those old rules set out in the Old Testament, the New Testament, and then the Book of Mormon, it actually put a lot of people in jeopardy, particularly women, but also myself.

By 2006 to 2010, I wanted to tell a story on this topic because I had worked for about six years on a television show called Big Love [about a polygamist and his Mormon family in Utah], and it didn’t have the tone. It was a lighter tone. I couldn’t delve into the history the way I felt I wanted to and needed to.

It’s very important right now that we shine light on people who decide they need to turn towards fundamentalism. That’s what happened with the Lafferty brothers. They hit hard times and they felt they needed to turn back to the fundamentals of a constitution and of religious texts. Frankly, that’s what’s happening globally right now. People have had a very difficult few years – violence, war, illness – and people are turning back to fundamentalist beliefs.

I believe this is a cautionary tale that says those beliefs are outdated. We didn’t know as much [in the past]. We know better now so we should do better now. Do not turn back to ancient texts and take them wholesale. You’re putting your loved ones in jeopardy. I felt it was important and necessary to finally open the door and let the light shine into my childhood faith.

You were originally adapting the book as a film. What were the challenges in developing the project that led you to make it into a TV series?
What proved to be impossible was accomplishing what the book did in a feature film, in two hours. The book presents several stories: stories that took place in the 80s and then a great many stories that took place in the 19th century that focused on the formation of the church. It really demanded readers be very engaged and active.

Jon Krakauer helped the reader along structurally, but it was really up to the readers to say, ‘Hey, I can see how the history of this faith and the early rules of this faith led to bloodshed in 1984.’ I wanted the audience to be that engaged in whatever film or television show I made, but I didn’t have time to tell all of the stories. Honest to God, I hope it’s a lesson to some writers that it’s OK to fail and it’s OK to fail repeatedly.

One of the distinguishing characteristics of a successful writer is that they’re not afraid to keep going, even when it’s not working. That was really what was happening in the feature film script. I did not have room to tell both the Lafferty story and the history of the church, and they were both necessary stories. In fact, once we decided, ‘Hey, let’s see if we can tell the story in a limited series and I had seven, eight, nine hours, whatever it was going to be,’ I learned I needed a third story, not just the Lafferty story and the Mormon history. I needed a perspective for an audience to be able to step into this world with, so I needed the investigation. It feels like an investigation when you read the book, so I wanted the show to feel like an investigation.

That’s where intervention came in. That’s where the characters of Bill Taba [Gil Birmingham] and Jeb Pyre were created. The rest of the story is absolutely inspired by the heartbreaking true story. And in fact, the bones of the investigation are also inspired by all of the research done. But there is that fictionalisation of those two characters. I thought it was important to have one be mainstream Mormon and the other be from outside the faith.

My hope is that although it’s very different [from the book], there’s a similar engagement of the audience when they’re watching. They’re being asked, alongside Jeb Pyre and Bill Taba, to figure out who did this, why they did it and where they are now before more people are hurt. Those were the big challenges. Should it have taken 10 years [to write]? Probably not, but it did. I would tell any other writers out there to persevere, because you might end up finally seeing it on the screen.

Why were you interested in creating a true crime series and how does Under the Banner of Heaven take the genre in a new direction or explore it from a new perspective?
I’ve always been a very big fan of true crime, and I’m mostly a fan of true crime when it seeks to do a deep-dive investigation into the personalities involved and we start to understand not just who did it, but why, where did it come from? I feel like that kind of understanding, that depth of understanding, is actually helpful. It’s instructive.

It’s also incredibly chilling because that’s when you realise these aren’t just monsters living in other people’s cities; this is possible anywhere. That was certainly the case for this show. These young men in this family were highly esteemed, very successful and beloved, yet they started to step down this path of fundamentalism, first constitutional and then religious. And to watch how it both changed them and magnified the darkest parts of them was chilling. It felt like a thriller.

This wasn’t just like it happened and the next day they caught them. No, this was a 10-day investigation chasing after who did it because they knew there was a list of more to be killed. That sounds like the classic thriller setup, so I couldn’t resist finally dipping my toe into that world.

How is it different? The title of the book says it all. The motivation isn’t financial gain. The motivation is that these are crimes and murders done for God, done in the name of God under the banner of heaven. I know I have not seen a lot in the way of true crime thrillers where the prime motivation, or at least the rationalisation, is faith. But I felt it was important to do because very likely there’s been more blood shed in the name of God than for any other reason. Even when it’s about territory, far too often in the history of mankind, we assign God to it.

I did think if we have a religious murder [in the story], this should be a true crime thriller. We should look into the darkest corners. We should investigate why this happened in the hope that perhaps we can stop doing it.