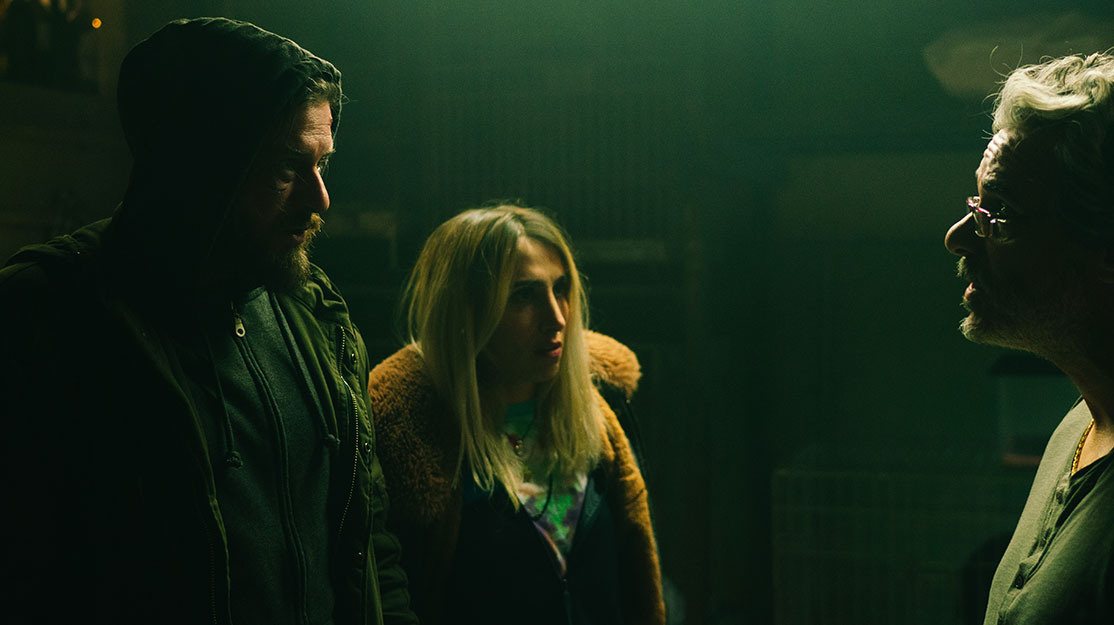 Showrunner Stefano Lodovichi and actors Edoardo Pesce and Silvia D’Amico speak to DQ about working together on Italian mystical thriller Christian, which centres on a gangster who gains mysterious powers.

Writer and director Stefano Lodovichi and actor Edoardo Pesce previously worked together on Il Cacciatore (The Hunter), a series that dramatises the true story of Italian prosecutor and ‘Mafia hunter’ Aldonso Sabella.

They have now reunited for Christian, a mystical thriller in which Pesce takes the title role of a man who lives in the so-called ‘City-Palace’ in a Rome suburb, earning a living by doing the dirty work of Lino, the neighbourhood crime boss. But when stigmata appear on his hands, Christian finds it physically impossible to continue his work, while also discovering he has gained mysterious healing powers he can use to fight against Lino.

Meanwhile, on Christian’s tail is Matteo, a mysterious Vatican postulator in search of signs and confirmations, who threatens to upset his life – and the whole world – further.

Lodovichi showruns and is among the directors of the six-part series, which also stars Silvia D’Amico, Giordano De Plano, Antonio Bannò, Francesco Colella, Lina Sastri and Claudio Santamaria. It is produced by Sky Studios and Lucky Red for Sky, and distributed by Newen Connect.

Christian had its world premiere in competition last month at French television festival Canneseries, where composer Giorgio Giampà won the Prix de la Meilleur Scénario (for best music). The show will launch on Sky Italia in January next year.

Here, Lodovichi, Pesce and D’Amico, who plays local junkie Rachele, speak to DQ about how the show blends crime, faith and religion and how it has been inspired by graphic novels and directors Guy Ritchie and Martin Scorsese.

Stefano, introduce us to the story of Christian.
Lodovichi: Christian is a supernatural crime story. The writers and creators are Valerio Cilio, Enrico Audenino and Roberto Saku Cinardi. I’m the director and showrunner. The idea was for a story set in a district of Rome where crime rules but where something magical happens, a kind of holiness, when stigmata appear on Christian’s hands. From that moment, nothing will be the same in the City-Palace.
One of the most interesting things about the show is that, as this is an Italian series, we talk about a lot of typical topics like faith, religion, politics and relationships in places where crime happens everyday and where someone like Christian can change everything.

How would you describe your role as showrunner?
Lodovichi: It was great to work with the writers and the production team. It was my first time as a showrunner so it was really amazing. We had the chance to work with a great cast. Edoardo and Silvia delivered the best performances – they are Christian and Rachele.

How did you work together with Stefano?
Pesce: [Working with] Stefano is fantastic. He’s a very good director. There was a good feeling on set. There is no time – it’s television time – but we have respect for each other. I always felt good respect for my work.

D’Amico: The most beautiful thing about Stefano is he loves his actors and he wants to do the best for you. It’s also great to work with him because he turns what may seem like stereotypical characters into unique characters.

Lodovichi: From the final draft of the screenplay to being on set,  you change a lot of things about your characters. You can only do this by working with the actors. They are the characters. They put everything into their roles – all their feelings, a lot of themselves. This is the difference. The difference between normal and good actors and very good and special actors is how much they put themselves into it. You want to play that character because you need to play that character.

Silvia, what appealed to you about playing Rachele?
D’Amico: I liked that there’s not only one way to play her. We did it in a unique way because there are a lot of different elements to the show – crime, supernatural and also something out of a graphic novel. It’s a really interesting mix.

Stefano, the look of the series blends dark shadows and neon lights. How would you describe the tone and style?
Lodovichi: In this kind of show, there are lots of different references. Yes, Christian is a supernatural crime story but it has a mixture of tones. You have comic parts, you have drama, crime and scary moments; you have miracles and superpowers. I always loved comic books and films by directors like Guy Ritchie and Martin Scorsese. Christian is a mix of this.

What was your experience like on set?
D’Amico: We did a lot of rehearsals. One of the most important things Stefano says is that he has the vision of the entire story. We don’t have a lot of difficulties on set because we have great support from the technical and special effects teams.

Lodovichi: It’s useless to work too much. We know what we have to do. It’s fast and furious. Filming during Covid was not easy, but now we can work in a good way because production has everything under control. It’s quite normal now.

For international fans of Italian drama, why should Christian be one to watch?
Lodovichi: The most interesting thing about the show is we have the mafia and crime mixed with themes of faith and holiness. Italy is famous for the mafia and the Vatican, so we tried to mix these things but with our own kind of vision. It’s unique.