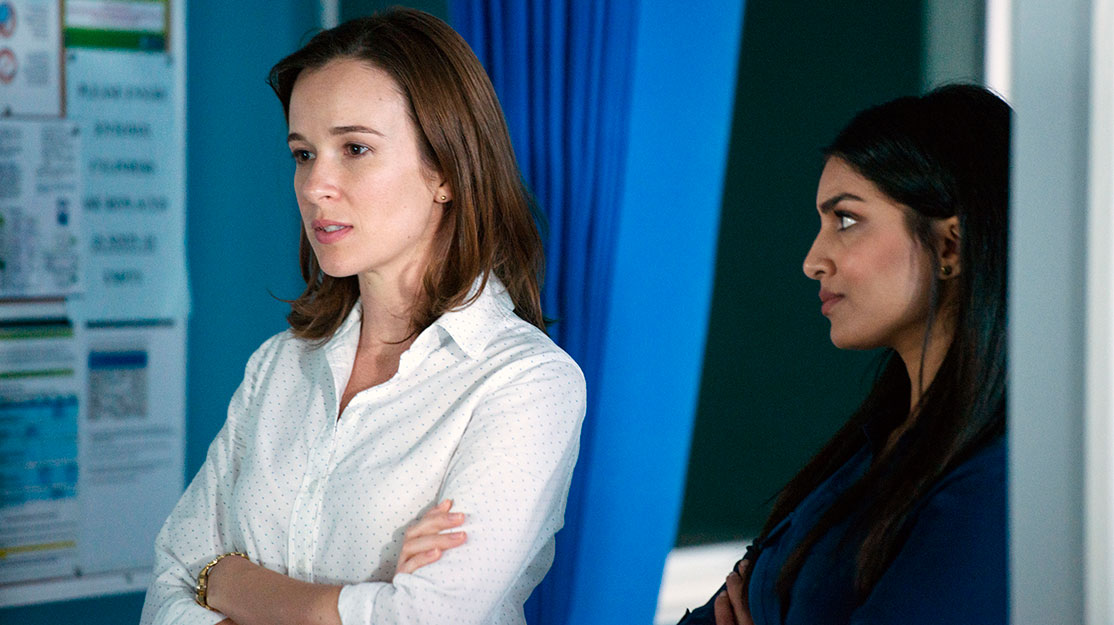 For Australian actors Claire van der Boom and Pallavi Sharda, the chance to appear in medical drama Pulse marked something of a homecoming.

LA-based van der Boom has been on screen in the US in shows such as NBC’s Game of Silence and CBS procedural Hawaii Five-O. Sharda, meanwhile, has starred on the big screen in films such as Oscar-nominated Lion and Bollywood productions Begum Jaan, Hawaizaada, Besharam and Heroine.

But they both returned down under for the eight-part ABC series, based on the true story of a transplant patient who was inspired to become a doctor. Van der Boom plays Frankie, a high-flying financial analyst who was given a second chance at life following a kidney transplant and, inspired by the man who saved her life, she trains to become a doctor at a major teaching hospital.

The series, produced by Clandestine Beyond in association with Beyond Entertainment and distributed by ABC Commercial, also highlights many real-world issues facing hospitals in Australia as the medical staff confront the political, personal and professional realities of working in an ailing system. In fact, as preparation, van der Boom watched UK factual series Hospital, which she says featured similar problems such as bed shortages, lack of places for medical students and the issue of suicide among trainee doctors.

“[The profession] is still very male-orientated so we’re dealing with a lot of that,” she continues. “In terms of patients, we’re dealing with the morals around what it is to be an old person with a pacemaker and when they want to turn it off, and a female refugee who doesn’t have her papers, so can we operate on her and [what if] she gets deported? It has all those huge questions, like whether or not a gay partner can come in over a sister when someone’s in a life-or-death situation. So all of that is global. I was really proud of our writers; they really crammed it full of cutting-edge questions.”

“She’s someone who has worked really hard but is fighting the fact that her father is the head of medical and is trying to prove herself, as opposed to being someone who may be there through nepotism,” she explains.

More appealing to Sharda, however, was the fact she felt this was a part in an Australian show – created by Kris Wyld, Michael Miller and Mel Hill – she could really “dig her teeth into.”

“It was really interesting because, being an Indian-origin Australian actor, it’s a pioneering cast in terms of the representation of people from different ethnic backgrounds and different sexual orientations, and [it looks at] very cutting-edge issues we need to explore now,” she explains. “I hadn’t had access to writing like that before or been given a script to read where I thought, ‘That seems like an authentic character I believe in.’

“The funny thing is an Indian doctor is a stereotype in itself, but here we are all playing doctors. It was really nice to be in the mainstream in this show and the ‘us and them’ was really broken down. Australia has been a little bit slower [to tackle on-screen diversity], only because our waves of immigration have worked very differently.”

With a lack of Asian stars on screen, Sharda looked up to talent such as British stars Meera Syal and Sanjeev Bhaskar and director Gurinder Chadha (Bend It Like Beckham). Now she says Australia is opening up more to diversity.

“I had to go to India to become an actor to a certain degree, because those opportunities definitely weren’t there in Australia seven or eight years ago,” she notes. “I don’t begrudge the industry for that, but it takes time and every industry has it’s teething process with these things.

“The same is true with any industry. Bollywood is pretty homogenous in it’s own representation of what being Indian means. It just talks about north Indian culture, for example. So it’s not that one is better than the other. For me, it’s nice to work in Australia because I’m Australian.”

As a renal resident at City West Public Hospital, Frankie must hide the fact that she is not only a transplant doctor but a transplant patient too, a fact she fears could destroy her career if discovered.

That overarching plot line, coupled with the true story behind the drama, meant van der Boom learned an incredible amount about dialysis and kidney diseases during the course of production, leading her to become very passionate about the subject of transplants and donor registration.

“Australia has some of the worst transplant rates in the world and a lot of people die waiting,” the actor says. “Particularly if you’re a young person who gets a kidney disease, it’s a life sentence, in a way, because it’s about eight years for a transplant. People don’t realise you can walk into a hospital and give a kidney. If you’re a recipient of a kidney from a living donor, it lasts twice as long as a deceased person’s, so there really are incredible options in science people aren’t really talking about.”

“We’re starting to see less of ‘woman, smart and beautiful’ in a script,” van der Boom explains. “Now it’s just ‘woman.’ Thank God that’s changing, but on this show, it just wasn’t important in the audition and the first couple of scripts I got. It was such a relief to find the love life was the fourth most important thing. We don’t have to talk about it, it just bubbles to the surface. We hope there’s more of that.”

Sharda picks up: “I do feel this convergence on so many levels of so many things I’ve been mentally fighting since I was a younger actor. This year I had a film released in India called Begum, in which I played a sex worker. It was about 11 women fighting for their house at the time of partition, where the British drew a line between India and Pakistan and pissed off.

“Our histories have been told in a certain way for so long, and all the storytelling I’ve been a part of in the last year-and-a-half has made me consider the history I’m a part of and how that storytelling has occurred, and the role I can play going forward.

“If we’re looking at what’s going on in Hollywood, Bollywood wasn’t even there. Then I saw this sea change and a global consciousness shift in the last couple of years. I feel really pleased that, at a global level, everyone’s thinking about those things.”

Van der Boom now hopes to return to Australia at least once a year to work on projects that are “quintessentially Australian,” while Sharda is writing a book about her cross-cultural experiences, reflecting on the ideas of dual identity and representation in a multi-cultural society. But the screen remains her priority, noting that it’s not the medium but the story that is now the most important thing when it comes to choosing acting roles.

“We’ve moved beyond ‘film versus television,’ with such great television being made,” she adds. “With Netflix, Amazon and all these people coming into India and making original content, the quality and production values have gone up, so it’s just more about the scope of storytelling for me. I’m an Indian dancer so one thing I want to do more is concentrate on live work. I feel like I’ve ignored that in the last few years. Anything I can do that is fusion and bringing cultures together, it doesn’t matter what the medium is.”