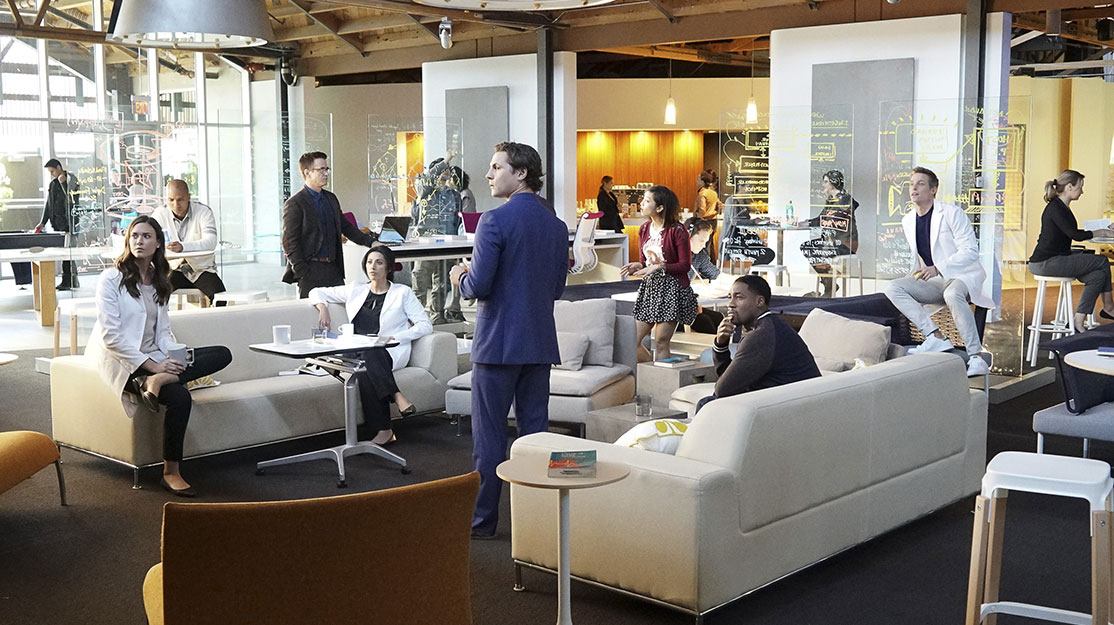 Fact trumps fiction in US medical drama Pure Genius, which offers a glimpse into treatments of the future. Michael Pickard discusses the show with writer David Renaud.

But as staff writer David Renaud reveals, there’s nothing in the show that’s completely fictitious.

“Everything is real, everything is based on reality,” he says of the CBS drama, which began its first 13-episode season in October. “There’s this weird perception that it isn’t but it doesn’t take much Google searching to find out most of this stuff is happening. When [showrunner] Jason Katims convened the writers’ room, he did not want to make a science fiction show. He wanted to make an aspirational medical show and that’s been the directive we’ve tried to follow as we explore the technology and medicine behind a lot of the cases in the show.”

Set at futuristic hospital Bunker Hill, the story centres on young Silicon Valley tech billionaire James Bell (played by Augustus Prew) who builds the ultimate cutting-edge hospital that treats only the rarest medical mysteries. Lending credibility to this new venture is Dr Walter Wallace (Dermot Mulroney), a maverick surgeon who’s the first to discover that his boss’s mission is to take the bureaucracy out of medicine, use the most forward thinking technology practitioners and just save lives – including his own.

Renaud is a family-doctor-turned-TV-writer who left medicine to complete the Disney-ABC Writing Program in 2015/16. His first show was ABC’s Blood & Oil, before he joined the writers’ room of Pure Genius earlier this year.

And it was while reading the pilot script for the show, formerly known as Bunker Hill, that the medical drama stood out to him, particularly due to the similarities he shared with the lead character.

“I had a spinal cord injury when I was in high school and after that injury, I woke up in a hospital room with the doctor telling me I was never going to walk again. So I decided I was going to try to find a cure for paralysis,” Renaud reveals. “The fact I went to med school to find a cure for myself really spoke to me about James Bell. I definitely connected to James’ motivation [to use the hospital to find a cure for his own illness].

“I’m also a huge fan of Parenthood, Friday Night Lights and all of Jason’s work, so any opportunity to work with him, no matter what the show was, I would have snapped up. So it was just lucky he was getting into the medical drama game.”

This isn’t your usual medical drama, however. From the opening scenes of the pilot, it’s clear Bunker Hill is a very special hospital where all manner of technology and techniques are used to save patients’ lives by any means possible. But under Katims’ leadership, characters always come first when it comes to creating storylines for each episode.

“Jason is really a character person and cares about why patients are there and how an illness can impact their life in a positive and negative way,” Renaud says. “We’ll usually start with character stories and bring in a really cool technology, like the liver regeneration. Jason wanted to tell a story about whether two people can come together over a broken relationship and then we needed to find some medical way to tell that story. I found this interesting article about regenerating the livers of alcoholics – so what if the only person that could give someone a liver was an alcoholic? That research is actually being done in Edinburgh; everything on the show is really happening.”

So while everything shown on Pure Genius has its roots in reality, Renaud admits there have been occasions where some stories look further into the future than others.

“In the beginning, Jason would always ask if something was real because he didn’t want anything fake,” he continues. “Then we got to the point where he trusted us! Jason was very particular about everything being rooted in reality. The brain reading in episode one is definitely pushing that technology more than five minutes into the future. They’re doing brain-to-brain communication – that is definitely happening, at a very basic level. It’s a bit of a leap but it’s definitely happening.”

Bringing new medical procedures and techniques to the small screen isn’t just a job for the writers, however, as both production designer Steven Jordan and property master Jeff Johnson are tasked with creating whatever is in the script, with just days to complete the job before each episode starts filming.

“We have a lot of sets built that Steven’s designed but every episode has a new location,” Renaud notes. “There’s also a lot of props and medical technologies we give them and they have a week-and-a-half to turn around, so they read the script and have got to have spider silk screws or a liver to pull out of someone to put into someone else.

“For the props, we’ll usually give them examples of things in reality they can be based on and Jeff will go and put his interpretation on it for the Bunker Hill version. Sometimes there are things we’ve read about in a research paper and there’s no way to tell what something looks like. But then Jason and the director can weigh in on what something looks like. To me, as a young writer, it gets turned around incredibly efficiently and very fast.”

With Pure Genius joining a list of US medical dramas that boasts long-running series such as Grey’s Anatomy and daytime soap General Hospital as well as Code Black, Chicago Med and Mercy Street, among others, the genre continues to find compelling stories to tell against the backdrop of life-and-death situations.

And it’s for that very reason that Renaud believes hospital-set scripted series remain so popular among viewers.

“Not everyone’s been to space like in Battlestar Galactica but everybody has been touched by a health crisis, whether themselves or a family member,” he observes. “So I feel like these stories are relatable, the stakes are high, medical dramas tend to do well when lives get saved and there’s something about the hope that somebody will do everything they can to save your life. There’s a bit of wish fulfilment tucked in there.

“They’re not going anywhere. There will always be medical dramas because these are human stories, and they’re great stories to tell.”