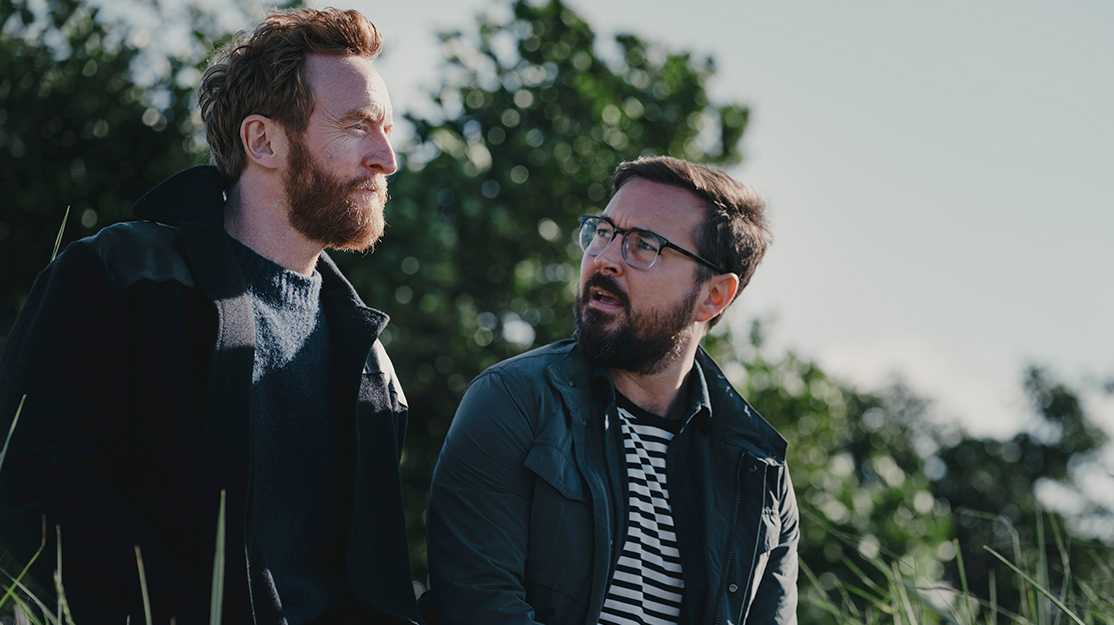 Mayflies writer Andrea Gibb and executive producer Claire Mundell discuss their approach to adapting Andrew O’Hagan’s acclaimed novel for the BBC and explain their personal connections to this story of friendship and loss.

Sometimes things just work out. That was certainly the case when the BBC needed a two-part drama to fill a slot in its festive schedule and Glasgow-based producer Synchronicity Films just happened to be working on a project that fit the bill – an adaptation of Andrew O’Hagan’s acclaimed novel Mayflies.

But the fact the producer had only optioned the rights to the book in 2020 meant finishing the project became the fastest turnaround that Synchronicity creative director Claire Mundell had ever worked on.

“It was genuinely one of those happy coincidences where the BBC needed something like this for the end of the year and we had something that fitted,” she tells DQ. “There are very few places you can take a two-parter now because the business is so focused on these big juggernauts, but we always knew this was going to be a two-parter and the BBC is absolutely the perfect place for it.”

Written by Andrea Gibb and directed by Peter Mackie Burns, Mayflies follows the friendship between Tully (Tony Curran) and Jimmy (Martin Compston), which is ignited in the summer of 1986 over a shared love of music, films and the spirit of rebellion. Thirty years after the pair shared a magical weekend in Manchester at the climax of their youth, Tully receives the worst kind of news – he has cancer – and asks Jimmy if he will help him end his life, a request that will push their friendship, love and loyalty to the limit.

That the show has come together extraordinarily quickly is down to the foresight of Mundell and Gibb, who liked the book so much that they began to develop the scripts before a broadcaster was involved, giving them an extra element of control over how they would adapt the novel for the screen.

O’Hagan was also involved in those early stages. “He gave us his blessing,” says Gibb, who then set about writing episode one and outlining the concluding part before even speaking to a broadcasting partner.

“The material spoke to me really strongly and it really resonated because my partner died four years ago, so I totally understood the grief,” Gibb says. “I completely got that idea of loss, particularly from Anna’s point of view, the woman who is married to Tully, who has terminal cancer. I completely understood her point of view.”

Once a script was in place, Synchronicity took the project to the BBC, which revealed its need for a two-parter. Gibb then had to finish episode two very quickly to get the show into production and allow enough post-production time to still deliver the drama on schedule. It will now air on BBC Scotland on December 27 and 28, and across the UK on BBC One on December 28 and 29, with all episodes being made available on BBC iPlayer, while All3Media International is handling overseas sales.

“Once we got the green light, it was all hands on deck,” the writer continues. “But Claire would call this ‘synchronicity,’ which is why her company is called Synchronicity, because it’s the right moment, right time, right project – and that very rarely happens. All the stars aligned. We were really grateful that we pressed on and did it ourselves.”

Gibb’s partner, Guardian journalist Simon Ricketts, died a couple of years before she first read Mayflies. His death was still very raw, but Gibb found O’Hagan’s writing captured both the profound emotions at play and the sheer banality of the life they shared together, dealing with his illness while also filling an online shopping order or watching cookery competition The Great British Menu.

She and Mundell were also interested in depicting the depth of male friendship among a group of working-class men, which isn’t something often shown on television.

“Andrew captures that sense of who they were and who they are, and how you have to readjust and accept different limitations on yourself as you get older,” Gibb says. “When you’re 18, you know everything. And then you get to 50 and actually you think you know everything, but you don’t really know anything. That really spoke to me in the book, and also the sense of loss and facing the loss of someone hugely significant in your life and how you navigate that.

“Claire and I have been friends for a very long time, and her and her husband and Simon and I were a very close foursome, so I also feel like this became a very personal testament to friendship.”

“I know Andrea is just so brilliant at that deeply emotional storytelling,” says Mundell, who had been a fan of O’Hagan since reading his first book, The Missing. “I also knew she would connect with it on a personal level too. It was one of those scenarios where you’ve got the manuscript, you have a complete idea of who the writer could be and you love the material so much that you’re prepared to just do what you can to get it made.”

Given that male element, Gibb admits she spent time considering whether this was her story to tell. But rather than imagining life as a young man in 1980s Scotland, she found she could tap into the story around Tully’s illness and the ramifications that has for his loved ones.

That meant that when it came to structuring the drama, they focused on the book’s second part, which centres on Jimmy’s dilemma, and that became the overriding narrative of the show. Glimpses of the book’s first half, covering the burgeoning friendship in 1986, then arrive in bursts to inform events in the present day.

Fractured timelines are nothing new for Mundell and Gibb. Synchronicity produced Jenna Coleman-led drama The Cry for the BBC and Australia’s ABC in 2018, while Gibb’s previous credits include Elizabeth is Missing, the award-winning TV movie based on Emma Healey’s novel about an elderly woman suffering with dementia.

“Those timelines are a way of storytelling that we’re very comfortable with and which audiences are completely used to now,” Mundell continues. “It’s always about finding those emotional connections between the two timelines to make every cut to the present or the past feel really motivated in terms of story. It just felt like there was real emotional justification for telling the story [of Mayflies] in this way. But you’ve got to be quite nimble in terms of the way you make those two timelines connect.”

Together with Synchronicity head of development Deanne Cunningham, Mundell and Gibb sat down to “forensically” look at how to join the two parts of O’Hagan’s novel, with the author also an executive producer on the project.

“I feel like we’re a really good combination between storytelling, production and the overview of the whole piece, and Andrew as an exec was slightly more hands-off but also a really great sounding board,” Mundell says. “We all shared a love of cocktails as well, which is helpful.

“The other thing is, for me, 1986 was the prime of my youth. Telling a story set in Scotland at that time, a Scotland I really recognise, resonated with me on so many levels.”

Gibb says O’Hagan was relaxed about how his novel might need to be transformed for the screen. However, she would constantly refer to his manuscript during her writing process, particularly when it came to bringing to life the “vivid” relationships between the characters.

“I kept going back and reading how they interacted and what Andy was saying about their friendship and who they were in relation to each other,” she says. “But in terms of events, plot and structure, we had to make some decisions to move away from or amplify certain things in the book, just to push the drama a little bit.”

That was particularly true in the case of Anna, because Gibb was writing her from a particularly personal place. “She has a slightly different journey in the TV series,” the writer adds. “She’s more vocal in the TV thing, shall we say. Andy’s writing about Tully and Jimmy, that’s his focus, but I worked with the women in a slightly different way, which is what I could bring to it. I can bring that female perspective. He’s really happy with that.”

Touching on the scenes set in the past, Mundell says Mayflies leans into the music, fashion and culture of the period that marked the start of Tully and Jimmy’s friendship. In fact, a list of tracks at the back of O’Hagan’s novel informed the music choices for the show.

Then when it came to casting the leads, the project struck gold in Curran and Compston, real-life friends who have known each other for more than a decade and could recreate the bond they share on screen.

“We’ve never seen Tony in a performance like this,” Mundell says of the Your Honor actor. “He’s really extraordinary. And it’s the same with Martin for his fans who are so used to seeing him more in action-packed roles like Line of Duty. This is so tender and the relationship between the two of them is just so beautiful. It’s a real joy to watch.”

The cast also includes Tracy Ifeachor, Tom Glynn-Carney, Rian Gordon, Paul Gorman, Mitchell Robertson, Elaine C Smith, Shauna Macdonald, Cal MacAninch, Colin McCredie and newcomer Matt Littleson. Meanwhile, Ashley Jensen plays Tully’s wife Anna, who finds herself on the outside of her husband’s decision after he asks Jimmy, rather than her, to help him carry out his wishes.

“That’s partly because he doesn’t want to put that burden at her door,” Mundell says, “and also he knows that she very strongly doesn’t agree with assisted suicide. Ashley plays it so beautifully and so subtly. She uses some of that wonderful comic ability that she has to offset the tragedy of what’s in front of her character, but it’s so tender and touching. We will make people cry.”

Gibb describes Anna as Tully’s equal, with the same quick wit and intelligence, who finds that the friends have gone behind her back with their secret plan.

“They do their boy thing, and that’s fantastic for them, but sometimes that could be perceived as shutting her out,” the writer says. “It’s not so prevalent in the book but, in the TV show, we’ve leant into the sense she does not want this because it feels to her like a betrayal that he would want to leave her before he has to. So she clings on and we instantly have a conflict situation, which is the essence of drama.”

But as well as an emotional look at the bond between two friends and a desperate decision they must make, Mayflies is also set to open up the wider debate around assisted dying. As such, Gibb says it was important that the show dramatised both sides of this complicated and often upsetting subject.

“It is not really our job to come down on one side or the other,” she notes. “If we’ve done our job satisfactorily, the argument will be had as a result. People will talk about it, ask questions and debate their own points of view. That’s the best we can hope for.”