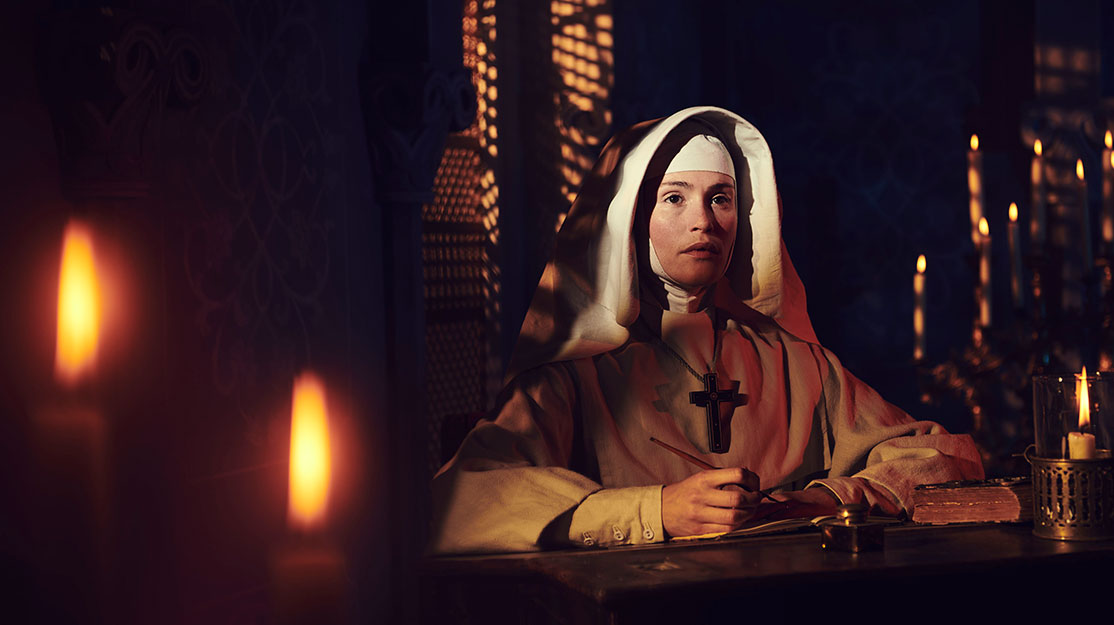 DQ reports from the set of Black Narcissus, the FX and BBC miniseries based on the classic novel that screenwriter Amanda Coe describes as “The Shining with nuns.”

From The Red Shoes to A Matter of Life & Death, the oeuvre of Michael Powell and Emeric Pressburger is so distinct, distinguished and revered that few have dared broach the subject of a remake – until now.

Like the 1947 film of the same name, Black Narcissus, from FX, the BBC and DNA Films, tells the story of Sister Clodagh (Gemma Arterton) and the Order of St Faith’s. Sent, albeit with reservations, by Mother Dorothea (the late Diana Rigg in her last television role) to lead a mission to establish a convent school in the Himalayan Palace of Mopu, Clodagh is met with indifference by the locals – Dipika Kunwar’s orphaned village girl Kanchi is a rare exception – and scepticism by expat local planter Mr Dean (Alessandro Nivola).

She and her fellow nuns (Aisling Franciosi’s damaged Sister Ruth and Patsy Ferran’s gentle Sister Blanche among them) are haunted by ghosts both from their own pasts and the tragic history of a building that once operated as a harem. They begin to question their faith and eventually their sanity.

“I was approached by DNA when they were developing the project,” says writer Amanda Coe, who also adapted Room at the Top and Apple Tree Yard for the BBC. “My initial response was: the film’s a masterpiece, so why would you create that problem for yourself? But once I’d read Rumer Godden’s [1939] novel I could see there was a case for making it in a way that goes back to the book while honouring the film. It’s about how place defines you and forms you – a bit like The Shining with nuns.”

“Through a number of factors – the isolation, the suppressed sexuality, all the things she’s good at being taken away from her – Ruth feels lost and jealous and starts to lose her mind,” says Franciosi, playing Mopu’s own Jack Torrance.

“Clodagh is an impulsive rebel who is shut down by joining the order,” says Arterton. “The beauty of the place gets under her skin and her sense of control crumbles. Ruth is a challenge for her, like Mr Dean, Kanchi is a reminder of her younger self… She starts to unravel.”

“Mr Dean is both a product of his time and place and a rebel against it,” says Nivola. “He objects to any kind of imposed morality and his experiences in the First World War have left him disgusted with British imperialism. In the film, I just remembered this guy in very short shorts on a three-foot-high pony! Once I’d read Amanda’s script, he felt much more psychologically nuanced than that.”

Everyone was keenly conscious of the series’ storied precursor, which won Oscars for both Jack Cardiff’s delirious Technicolor cinematography and Alfred Junge’s art direction. “My instinct was to make a completely different version,” says Coe. “But as I got more comfortable with the material, I realised you have to deliver on certain things, rather than it be like seeing a Hamlet where he doesn’t do ‘to be or not to be.’”

Director Charlotte Bruus Christensen was duly careful to include homages both big (a certain bell tower scene) and small (the crucifixes worn by the nuns). Indeed, continuity abounded, with Pressburger’s grandson Andrew Macdonald exec producing and one of Godden’s great-granddaughters working as an AD. Most interiors were, like the entirety of the film, shot at Pinewood. “They said we couldn’t make it anywhere else,” laughs Macdonald’s fellow executive producer Allon Reich.

There are, of course, also substantial changes, not least the necessary decision to cast more sensitively: while Jean Simmons played Kanchi in 1939, Dipika Kunwar is a Nepalese-born and British raised. Many exteriors were shot at an airfield in Bovingdon, Hertfordshire, but Christensen also filmed for a week in Nepal itself – an experience still resonating among the cast.

“Four flights and two-and-a half days to get there,” recalls Nivola, shaking his head. “The last leg was really terrifying – we flew directly at one of the three highest peaks in the world on this tiny plane… The thing that made the biggest impression on me was the mix of religious backgrounds, living together harmoniously. That’s the backbone of Mr Dean’s argument: the ridiculous need to impose Western culture and morality on a people who are perfectly happy as they are. Having seen that first-hand, it made that argument feel real and potent.”

“I can see why you’d be so attracted to spending your days daydreaming and looking at the landscape rather than keeping your gaze down and praying,” adds Franciosi. “With that total isolation and vast beauty, I had a crushing feeling of not mattering, a humbling feeling of irrelevance. It was useful to tap into that.”

“It’s the most beautiful place I’ve ever been,” agrees Arterton. “That’s important because it’s a huge part of why the nuns unravel – the godliness of the place makes them start to question God. When we came back to Pinewood, it was invaluable to have that in mind.”

“The costumes are great for the characters,” enthuses Franciosi. “They’re restrictive, like blinkers, designed to keep you gazing inwards – it’s about ‘custody of the gaze,’ what you choose to look at and not look at.”

That characterisation was further assisted by research trips to convents, where the actors witnessed individuality replaced by community, the single-minded sense of purpose and the adherence to routine – the spiritual rewards, but also the physical and psychological demands.

For Coe, while the book is eight decades old and the film barely any younger, with the empire long gone and religion long estranged from the heart of British cultural life, the themes of Black Narcissus – which airs on BBC1 from December 27 to 29 following its debut on FX in the US last month – are both eternal and profoundly contemporary.

“It’s a parable,” she says. “A parable about the dangers of othering, about making oneself exalted at the expense of cultures outside, even about the notion of one’s own history. The book is a compressed, powerful expression of that, rendered as psychological horror. And the synchronicity about nuns losing it in isolation together? We can all relate to that this year.”