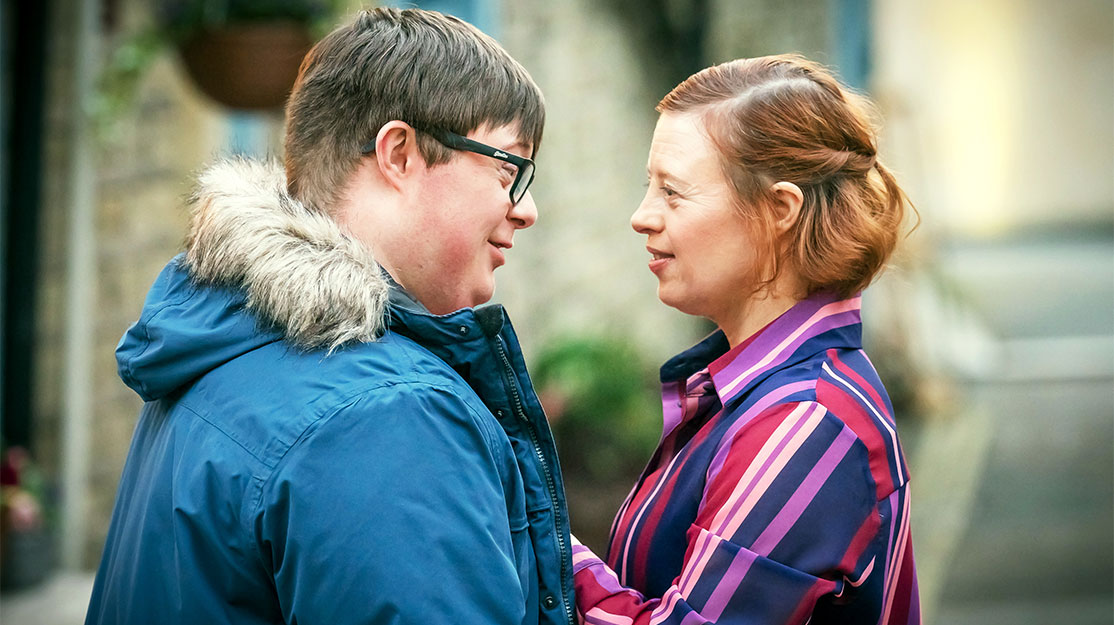 The A Word spin-off Ralph & Katie continued the story of the titular newlyweds as they face a host of domestic challenges. DQ spoke to writers Genevieve Barr and Tom Wentworth about working on the series, which broke new ground for inclusive drama.

For three seasons, picturesque BBC drama The A Word follows Max, a young boy with autism, and how his loving, close-knit family learn to live with his diagnosis.

Set in England’s Lake District, the series – which is based on Israeli show Yellow Peppers – boasted an extended cast of family members and friends who all rally around Max and share their highs and lows together.

Following the conclusion of the series in 2020, the BBC quickly announced it had commissioned a spin-off that follows the continuing story of Ralph and Katie Wilson, newlyweds who face a host of domestic challenges in their new life together – with the added ingredient that they both have Down’s syndrome. Leon Harrop and Sarah Gordy play the titular couple.

Ralph & Katie isn’t just a groundbreaking series in front of the camera, but also behind the scenes, where creator Peter Bowker brought together a team of new and emerging disabled writers for the show, assembled in partnership with BBC Writersroom. Amy Trigg, Annalisa Dinnella, Genevieve Barr, Tom Wentworth and Lizzie Watson penned the scripts, while director Jordan Hogg is himself disabled.

Following its launch on BBC One earlier this month, distributor Keshet International sold the series – and all three seasons of The A Word – to Disney+ for viewers across Europe (except the UK), the Middle East and Africa. In particular, it is now available in the Nordics and Belgium, with rollouts in Portugal, Italy, Spain and France from November and Germany, Austria and Switzerland in the new year.

Here, Barr and Wentworth tell DQ about joining the writing team, moving the story forward from events in The A Word and balancing the sweet and charming show’s characteristic comedy with emotional drama.

How did you come to join the writing team on Ralph & Kate?
Tom Wentworth: I heard about Ralph & Kate when it was announced at a TV festival and immediately rang my agent and said, ‘I’ve got to be part of it!’ Luckily, they were asking writers who had been part of the BBC Writersroom’s Access Group, so when the invitation to pitch arrived I was ready. I submitted two pitches and was then invited to interview with Peter [Bowker], Kat [Pugsley, executive producer] and Oliver [Grieve, script editor]. I came off the Zoom interview with everything crossed and was completely thrilled when they invited me to join the writing team. I’m still thrilled now.

Genevieve Barr: The A Word was pure magic and I was delighted they decided to do a spin-off on this couple. We had to write up a story of the week, then meet the inimitable Pete Bowker with Kat and Oliver. Between the three of them, you could tell this was going to be such a generous, infectious and thoughtful show and I was so hoping to be picked to be part of their gang. Then on the first day, when the gang expanded on that first Zoom call to include Amy, Annalisa, Tom and Lizzie, I just felt like I’d joined the cool kids.

What were your initial conversations like about how to move away from The A Word and focus on the two title characters?
Barr: The focus on Ralph and Kate was made easier by the fact Pete had already drawn them out beautifully. We didn’t have six versions of them in our heads; Sarah and Leon had already inhabited them. As far as moving away from The A Word, we knew which cast were and weren’t available, there were parameters such as setting it in the Lakes, but beyond that, how it took shape evolved in the writers’ room.

Wentworth: I also think we weren’t trying to move away from The A Word necessarily – who would want to? It’s a glorious show! – but make our show distinct in its own right. Being 30 minutes rather than 60 really helped to make them feel immediately different. Thirty minutes requires a very different way of telling a story.

How would you describe Ralph and Kate, and their relationship?
Wentworth: It was already an enviable relationship in The A Word but we’ve been able to deepen it within the show. They are lovely, kind warm characters – they are sure in their relationship and fiercely protective of it and each other. However, they are by no means saccharine. Ralph can be wonderfully stubborn and Kate won’t stand for any messing. Peter sums it up very well when they describe themselves in episode one as “not perfect.” It’s that self-awareness that makes them the perfect couple. Most importantly, they are funny and are extremely good at keeping calm whilst chaos circles them. They’re both immensely fun to write and, when the chips are down (as in my own episode), they are the ones who pull together.

What can you reveal about the stories in the show and how we follow Ralph, Katie and the large ensemble of characters through the series?
Barr: It’s about their first year of marriage and all the highs and lows that come from that and living together in their new house. From key events in the calendar, like Valentine’s Day and Christmas, to exploring the unexpected with support workers versus tiger mothers, health issues and friends who bring their own problems to the doorstep. Most of the time they’re just after a bit of peace and quiet, but the drama never stops.

When it came to writing your own episodes, what ideas did you have and how did you ultimately decide what to focus on?
Wentworth, who scripted episode five, in which Ralph has a health scare: I’d been so impressed by Leon’s performance in The A Word that I wanted to write a story that would show off his dramatic acting chops – because we all know he’s a wonderful comic actor. The idea occurred to me that I’d like to explore another strand from The A Word in Ralph & Katie: Louise’s cancer had been such a moving story, I wondered what would happen if Ralph also had a health scare to deal with. How would he and Louise react, and what would it do to Kate and Ralph’s relationship?

Unlike other stories, mine stayed intact from the beginning, becoming richer as it developed into not a story about health or even cancer but a story about what happens when you realise that life is finite and that one day even our perfect couple will lose each other. Peter, Kat and Oliver helped me immeasurably to get to this really special place with the episode, which has so much more depth and punch than I could have ever imagined.

Barr, who wrote episode four, where Sarah finds herself in the middle of her parents’ marriage problems: Mine is the tipping into the later half of the series and we wanted to mark a moment where Katie reflected on what she’d left behind. Inevitably, marriage is about moving forward, but for this couple, it wasn’t always expected that they would get married and leave home, so it was a moment to look at how that might have affected Katie’s parents, Steve and Clare. Empty Nest is such a universal experience for parents, and sometimes it shifts something in who they then are as husband and wife. It’s hard.

More importantly, this was a moment for Sarah (who plays Katie) to shine and that she does. It’s on her to navigate her parents’ complicated feelings but also to recognise she has changed as well. That change renegotiates relationships, whether or not you’re willing. A beautiful moment played between her and her father Steve felt really special.

What was the writing process on the show like, from working with Peter Bowker and the rest of the writing team to then writing your own episodes?
Barr: We did a Covid lockdown virtual writers’ room, filled with hot cross buns and marmite in microwaves. From the off, Pete said we would get an episode each, loosely based on what we had all individually pitched. It was a very gentle way of putting us at ease and giving us ownership. From then on, it was about developing [supporting characters] Danny, Emma, Brian and Tom, looking at the stories that would straddle the episodes and mapping out Ralph and Katie’s individual journeys through the series. Then we all went away and wrote up our episodes. After the camaraderie we’d had, it felt very lonely.

What was your collaboration like with director Jordan Hogg?
Wentworth: Jordan was hugely supportive and really got my episode. I was sorry not to spend more time on set, but Jordan and I had an excellent meeting about my script, how he’d shoot it and what I wanted to achieve. I knew that a really sensitive story was in very safe hands.

Barr: Jordan was awesome to watch on set – super-respectful and thoughtful to work with. You could tell Ralph & Katie was in a great pair of hands.

How have you seen Ralph & Kate driving increased representation in front of and behind the camera, and what does the television industry need to do to follow its lead?
Barr: I’ve been lucky to write on two disabled-led shows released this year, with Then Barbara Met Alan, which came out in March (co-written with Jack Thorne) and now as part of Ralph & Katie. It’s been marvellous. The BBC is marvellous, but it’s rare.

The CDN (Creative Diversity Network)’s figures on five years of representation of disability on and off the camera is depressing – because for all the positive intent, there’s been very little change. Physical access in production spaces is a huge problem. Disabled creatives are struggling to stay in the industry because of this. In August, the TV Access Project was announced with nine broadcasters and streamers signed up. It’s a cross-industry commitment that change needs to happen from the top, with disabled people included. A lot is happening – the 5 A’s guidelines from commissioners, newly qualified access coordinators ready to hire, a roundtable due to take place with studios and facilites companies.

Significantly, Ralph & Katie did things I’ve never seen before. They were inclusion-led, things were thought about from the very beginning. It wasn’t about facilitating someone’s disability, so much as recognising everybody works differently – how can we support that? How can we benefit, even, from adjusting our thinking? All that starts with a willingness and a question put out to people.

What is in store for Ralph & Kate in the future?
Wentworth: Who knows? I really hope more adventures. Perhaps their parents will even learn to stop interfering!

Barr: I understand Sarah and Leon have told Pete and Jordan their ambitions for the next series. Hopefully common sense prevails to stay out of their way and let them get on with it!

What are you working on next?
Barr: I have a thing called ID with Channel 4, which has just been greenlit, which is ace. There’s some other stuff in development. I really hope Ralph & Kate comes back to our screens; it’s been a really glorious show to work on.

Wentworth: I have a disabled-led short film about queerness and climate change, which I’ve been working on for a while, about to start shooting. Plus, I’m developing a couple of things for TV and theatre, but it does feel odd to not be writing about Ralph and Katie – I’ve loved being one of the gang.