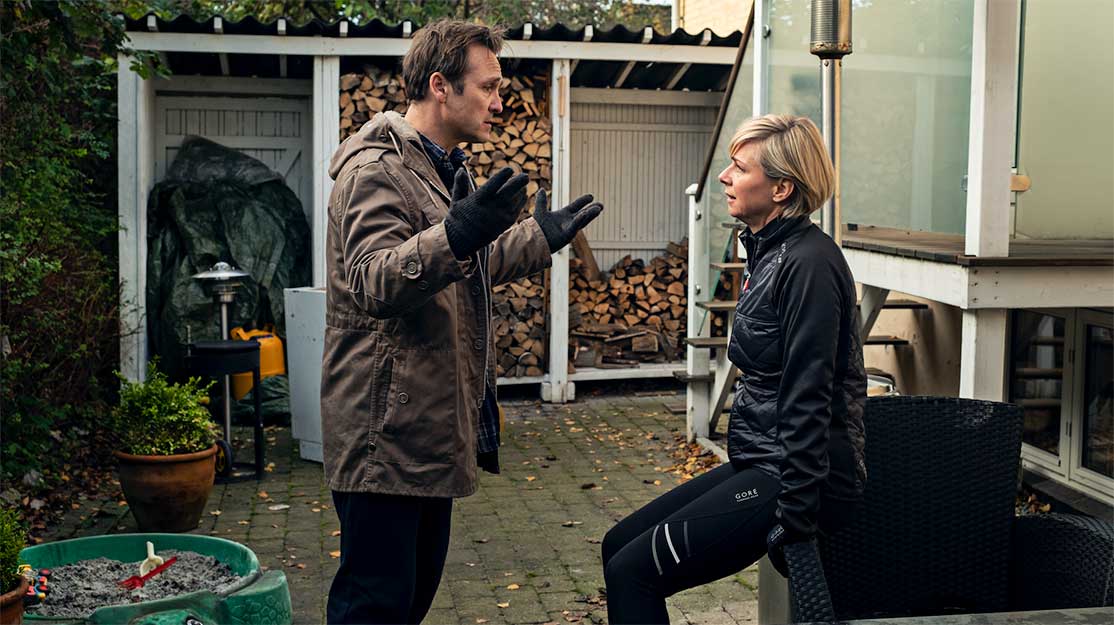 Danish writers Thor Bjørn Krebs and Mikkel Serup talk to DQ about the making of their crime drama Pros & Cons, in which a couple seek to spice up their lacklustre marriage by returning to their former lives as con artists.

Of all the ways to breathe new life into a marriage that has lost its spark, starting a life of crime might not be the first thought that comes to mind. But for Nina and Erik, the protagonists of Danish drama Pros & Cons, it is simply a return to old habits.

Twenty years ago, the couple were brilliant con artists and since then have been trying to hide their criminal past. However, the reappearance of a former conspirator with a new idea for a money-making scam proves to be the perfect way to inject some excitement into their peaceful – but lacklustre – family life.

It’s this idea of escaping from the chains of domestic duties that gives the series its Danish title, Friheden (Freedom), which is also the real name of a train station close to the homes of series co-creators and writers Thor Bjørn Krebs and Mikkel Serup on the outskirts of Copenhagen.

“We both live in this neighbourhood, close to this train station,” Krebs says. “We both have wives and children and dysfunctional marriages and mortgages and all that nice stuff, so [the show is] born out of a necessity to do something and not grow stale in relationships and everyday life, with malfunctioning dishwashers and stuff like that.”

With the series mixing elements of real life with heightened crime drama, Krebs and Serup say they spent 90% of the development period talking about mixing genres and figuring out how they could put a fresh spin on the relationships at the heart of feature films such Bonnie & Clyde and Mr & Mrs Smith.

“You never see those characters go to the bathroom, needing a snack or raising the children or telling their son he spends too much time on his iPad,” Serup jokes. “All those are very relatable, real-life scenarios. We hadn’t seen that in a crime drama before. We do have scenes where they are breaking into a pharmaceutical company and put up surveillance cameras, but they’re always contrasted with cooking dinner for the kids or picking them up from sports or whatever.”

The pharmaceutical company is at the heart of the plot, with the characters justifying their efforts to steal from it by likening themselves to Robin Hood, taking wealth back from greedy corporate giants.

The growth of fraud in Denmark over the last few years provided one of the starting points for series, as did the observation that low-level thieves appear to be dealt harsher punishments than “the real con artists who wear a suit and tie,” says Krebs. “We follow the rules, we pay our taxes, we try to bring up our kids – but those who make the rules, they don’t follow them. They make their own rules, they don’t pay taxes. That’s a strange world.”

Serup picks up: “We needed something that would allow the audience to root for the criminals, so they don’t steal money from a group like Médecins Sans Frontières [medical charity Doctors Without Borders]. That would be questionable. But it’s OK that they steal money from a pharmaceutical company that uses their size to set their own prices for their products. It’s OK to take from them.”

It’s not just the news that has informed the series, but the writers’ own lives too, drawing on their domestic experiences to dramatise Nina (Lene Maria Christensen, The Legacy) and Erik (Lars Ranthe, Badehotellet)’s frustrations. One scene was based on Krebs discovering that the basement of his recently bought house was filled with water, while the characters’ material desires – a bigger house, a new car, a working washing machine, a dry basement – are all easily relatable.

The pair came together to work on Pros & Cons, living just 200 metres apart and sharing stories of their similar lives in similar houses. Their children also go to the same school.

Krebs had the initial idea to turn the story into a film 10 years ago, but five years ago he and Serup began talking about it together and developed the outline for a television series over coffee in one of their kitchens.

That move into television wasn’t a result of the story, however, but “from the changing times and the way TV shows and streaming services have grown over the last five years so there are more opportunities,” Krebs explains. “The broadcasters of TV series are more daring and it gave us the opportunity to be with this couple for a longer time, to move into their lives and follow this rom-com.”

The writers worked on the first two episodes together for more than two years, honing the style and tone of the scripts over that time and then using them to build financing for the show, which enjoyed its international premiere at Series Mania earlier this year. It is produced by Sam Productions and distributed by StudioCanal, and will air on broadcasters including NENT Group’s Nordic streaming platform Viaplay, its sister network TV3 and France’s Canal+.

With Pros & Cons commissioned in November 2017, Serup left the writing room to direct the first two episodes, while Krebs remained at the typewriter, working with a number of episode writers to complete all 10 instalments.

“Hopefully in a partnership like this, with Thor Bjørn as the main writer and me being the co-writer and director, we can blend talents so we always have an eye on how it will be solved in the end and how is it possible,” Serup says.

As the lead director, Serup says he only storyboards action sequences and montages, relying on loose-fitting shot lists for the rest of the production – leaving room for new ideas and inspiration to strike. “Plus it’s handheld, most of it,” he says, “so we like to be able to move around and stuff like that. When it’s the scenes at home, we like to work handheld because we’re able to move with the characters all the time – especially when you have kids, as they don’t always hit their mark. So we follow them. But when we do the car bits and the larger action setups, we always storyboard it.”

Within that approach, they sought a sense of scale and suspense commonly found in movies – an ambition further fuelled by the decision to use anamorphic lenses to film the Cophenhagen-shot series in 2.35:1 widescreen. “It might be an odd choice for something that is family-friendly, but that puts the family into a very cinematic frame,” argues Serup, who shares directing duties with Tilde Harkamp and Mogens Hagedorn. “The show’s not just about packing the lunches for the kids. It’s framed in a special way.”

The most challenging aspect of the series, Krebs and Serup agree, was finding the balance between comedy and drama – something that was particularly profound for the actors, who had to make the characters real and believable while always trying to prevent the series from becoming too dark or heavy.

To this end, Serup orchestrated numerous readthroughs of the scripts, in lieu of any time to rehearse before the cameras rolled. “We know both actors. I’ve worked with them before, so we had a good rapport with them already, which helped a lot,” he says. “They’re very generous in that they come with lots of suggestions for themselves. It was a very fluid and smooth shoot. They’re very sweet, talented and generous people. That made it easy. There were no divas.”

Krebs says: “The main cast really got the balance. Lene really wanted to play that angry, uptight wife but also to be a superhero who puts on a cape and sneaks through a window. She liked both. Lars was more in doubt because he was driving a Maserati to begin with, feeling like a superhero and speaking like a con artist, and then he had to get on a rusty bike and go back to reality.”

Though it may seem unlikely at the initial suggestion, there is a lot of truth to Krebs’ claim that, in the end, Pros & Cons is a love story about two people trying to keep their romance alive, only by illegal means.

“How do you keep love alive? For them, it’s conning. We hope people can relate to that,” he says.

On the world stage, Denmark has become synonymous with flawed police detectives and broody, sullen landscapes, but Serup hopes his series can show a lighter side of Nordic crime drama.

“We haven’t really seen comedy travel yet, but this is a shallow mix of comedy and drama,” he says. “Borgen, The Killing and Bedrag all travel abroad because it’s universally accepted that crime is bad and guns are dangerous. But we hope that humour will travel as well. We’re anxious to see if our show will ride on the coattails of previous shows’ success.”

The director concludes: “I think there is a shift away from Nordic noir. You’ve got to be careful it doesn’t become a pastiche, so we have to keep renewing it. With our show, we’d like to not just redo conventional Scandi noir but infuse it with a little bit of curveball humour.”