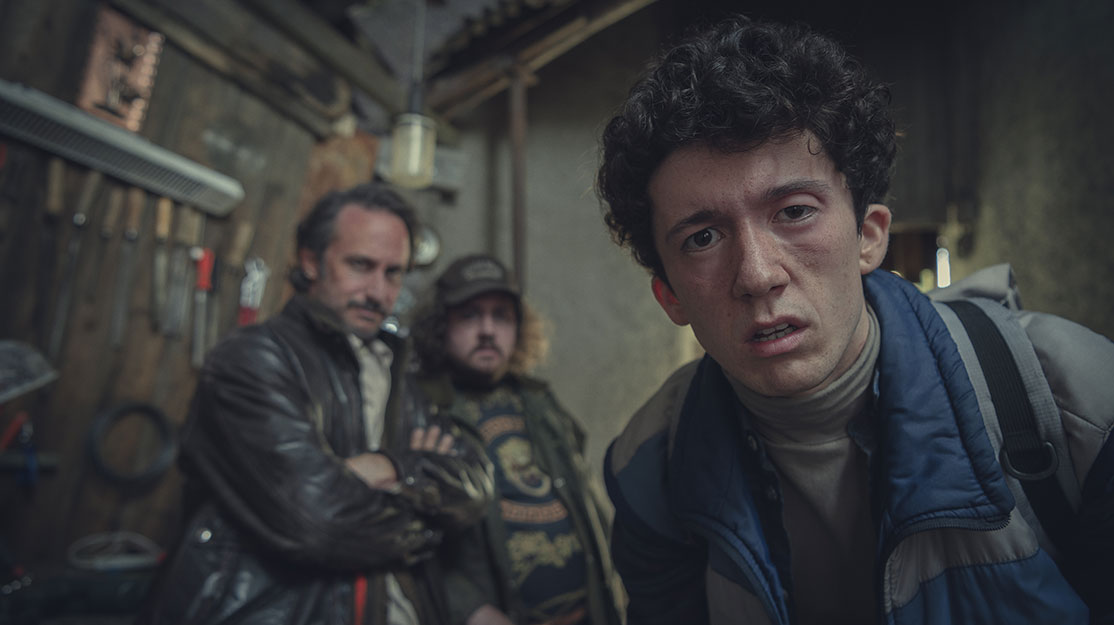 As Netflix drama How to Sell Drugs Online (Fast) returns for a third season, co-creators Philipp Käßbohrer and Matthias Murmann discuss their collaboration with the streamer and its German originals manager Eva van Leeuwen.

Since it debuted in 2019, Netflix German original series How to Sell Drugs Online (Fast) has ramped up its story of teen drug dealer Moritz and his internet-based emporium, well, fast. Just two years later, the award-winning show – which blends crime, comedy and coming-of-age drama – is now heading into its third season.

The series opens as high-school student Moritz (Maximilian Mundt) tries to win back the love of his life by launching Europe’s largest online drug business, operating from his bedroom with the help of best friend Lenny (Danilo Kamperidis).

In season two, after a bumpy start for the business, the online drug shop becomes more successful – and even more dangerous – while Moritz and Lenny must continue to navigate school life.

Now in season three, which launches globally today, Moritz suddenly finds himself totally alone and desperately trying to hold on to power as CEO of MyDrugs. But when Lenny’s health suddenly worsens and he needs Moritz’s help, the two best friends come back together for one last job – with explosive consequences.

Told from Moritz’s point of view with the use of voiceover narration, the show stands out for its dynamic direction, coupled with the use of on-screen graphics that lay social media posts and other graphics over the action as it plays out. One sequence transforms Moritz’s bike ride into a computer game, for example.

The series comes from Cologne-based production company BTF, based on the initial idea of a teenager who sells drugs from home to impress his ex-girlfriend. Speaking earlier this year at Berlinale Series, the show’s creators and showrunners Philipp Käßbohrer and Matthias Murmann joined Eva van Leeuwen, Netflix’s manager of German original series, to discuss how their collaboration came about and why Moritz is the voice of a generation.

How to Sell Drugs Online (Fast) is the first scripted series from BTF, which has a reputation in Germany as an innovative producer of unscripted programming.
Käßbohrer: It’s not our very first fiction production. We made a short movie in 2011 about the end of the world – it’s just the smaller topics we want to work with! After that, we stumbled into the unscripted world and we did some fun talkshows, late-night shows, comedy shows and documentaries in Germany. The special thing about this project is we made it with the same team with which we made the short movie and also our other TV productions, so it’s a team that has worked together for 10 years. That’s very special for us.

Murmann: When we founded BTF, we wanted to create a foundation to bring together a lot of really talented people to make great content. We are constantly working with them on so many different projects and not tied so much to specific genres. We’ve evolved over that time and have now stepped into the larger scripted series world, which has actually always been a dream to do, to work on that kind of level.

Netflix arrived in Germany six years ago and opened its first office in Berlin last year.
Van Leeuwen: Quite a lot has changed for this team in the last six years. When the first German original series, Dark, was commissioned in 2016, there were no local content executives on the ground in Europe. Since then, fully operational offices [have opened] in quite a lot of European countries, including Germany, so we now have whole content team and marketing teams working together out of the Berlin office.
We’re still a relatively new, small team [looking after German original series] but we work closely with our colleagues from the other fiction and non-fiction departments, so we try to programme for Germany really holistically. That means we programme German-language films, stand-up comedy and documentaries. Licensing is still a big part of the business, so it’s a big push for German content in general.

BTF had several scripted projects in development when it pitched How to Sell Drugs Online (Fast) to Netflix.
Murmann: We were a little bit stuck: we pitched and pitched projects but they weren’t picked up. Then we got the mobile number for someone at Netflix and tried to get them on the phone. We were not in the system where Netflix looks for producers and creatives because we were a small company and without experience. Then we got hold of them and pitched and pitched and pitched.
We were in New York City for something else and we had [Netflix executive] Brian Pearson on the phone and we were in this really weird hotel room and talked him into it. He couldn’t get out of it anymore. That was the start of creating the series bible and the material. We convinced the team with the material and then got a greenlight and started making the first season.
When we got the greenlight and started working with the Netflix team, it was very funny because [we face a lot of scepticism] like, ‘Can you really do it?’ We love to be challenged, the spirit was right and that’s how everything came together.

Käßbohrer: We have a company motto: overconfident since 2012. We always think everything is possible and let’s jump into it.

Netflix proved to be the perfect home for the series, rather than a terrestrial German broadcaster, because the streamer offered a “fair” deal.
Käßbohrer: On Netflix, you really can reach many people with your content. In the linear German system, the rule is if no one sees your show in the end, the airing time was wrong. In Netflix’s world, if no one sees your show, maybe your show sucks. It’s a better deal; it’s super fair. Therefore, we are super lucky we landed on this global platform.

There were two reasons why Netflix wanted to work with BTF on the show, knowing the company had no experience in making this type of TV before.
Van Leeuwen: It’s very much Netflix’s philosophy to try new things and to look for innovation .The two companies’ spirits align in that way. Then it really comes down to a really great idea that Matthias and Philipp had, and really convincing material, and there was a belief that because this company was producing so much innovative, great content on the non-fiction side, it would be able to deliver something that was going to be unique and fresh [in scripted], and they’ve shown they can really do that.

Murmann describes BTF’s partnership with Netflix as a very close working relationship, with the teams in contact almost every day.
Murmann: It’s very good. We both have a very strong feeling about being closely connected on what the creative material is and also seeing the result in the same way. That’s always very positive because we put our benchmark at the same height.

Käßbohrer: Netflix gives us all the freedom we need for our project. There are no boundaries, not in our heads nor when it comes to storytelling, thinking freely and being very open.

Van Leeuwen: Part of the success is [down to the fact] we have such a strong shared vision and we always feel like we’re working towards that together. That doesn’t mean we always agree on everything, but we know that in the end we’re working towards the same goal. Then it’s a very small team taking the big creative decisions together. It’s not spread out in a big production where everyone has to agree. Sometimes it’s a phone conversation to decide on something really big together, and that’s part of what makes this relationship work so well.

When it has greenlit a new series, Netflix tries to avoid becoming too involved in the development process.
Van Leeuwen: We feel like what we do is act as a guide for the partners and producers we work with towards how to make a show successful for Netflix, because that’s a very specific thing. It’s not necessarily how you would make a show successful for a public broadcaster. We don’t want to set certain boundaries or say this is a no-go; we want to work constructively together in a collaborative way on the same vision.
There are then topics we feel more strongly about than others. The conversation around drugs and how we show the effects of drugs was something we discussed. A topic that we talk about a lot with creators is diversity and how we can increase that. When it’s topics that are very close to our hearts or that we feel very passionately about, we will have slightly more passionate discussions than on other subjects where it’s OK to give that freedom or to just be like, ‘We trust you’re going to take the right decision.’

Producing one season a year of How to Sell Drugs Online (Fast) was difficult at first but BTF adapted and rose to the challenge.
Murmann: We really loved to see how Netflix works and try to adapt to it. It is sometimes insane that we approach directors or team members with outlines and treatments, not final scripts, but we try to be flexible. Normally they say they have to see the script otherwise they cannot do anything. We say, ‘Maybe we could talk a little bit and then, if you have a location, we can put the episode in that location.’ We work back and forth to be quick and to work within those constraints from the outset, and we also [changed the way we do] script development. That opened up the possibility to be as quick as possible.

The fast editing brings a dynamic style to the series that is enhanced by the use of on-screen graphics and imagination sequences.
Käßbohrer: The moment we really had a feeling for the vision of the show was when we realised it’s not about a criminal, it’s a show about a generation; a show about a special way of growing up in a very digitised world and finding your own identity in a world with so many identities you can play. Who are you in your multi-player game? Who are you on Twitter? Who are you on Instagram? Who are you in school? It’s way more complicated than when we were kids.
When we realised that, we really had the central topic of the show. It wasn’t about drugs, it was more about this coming-of-age generation and society that had never been represented in a TV show, so we decided to find a way to make it feel authentic.

Netflix has now had several hit series in Germany, but there’s nothing in particular they have in common.
Van Leeuwen: If we look at shows that work the best internationally, like Barbarians, Dark, How to Sell Drugs Online (Fast) or Unorthodox, they are so incredibly different that I don’t think they share one identity. What they do share is they are all great examples of really great storytelling and amazing execution, and they don’t shy away from the German perspective. They tend to lean into the specificity and authenticity of being German and being German shows. That probably has more to do with why they work in other markets. People from all around the world can relate to the stories that feel really local.