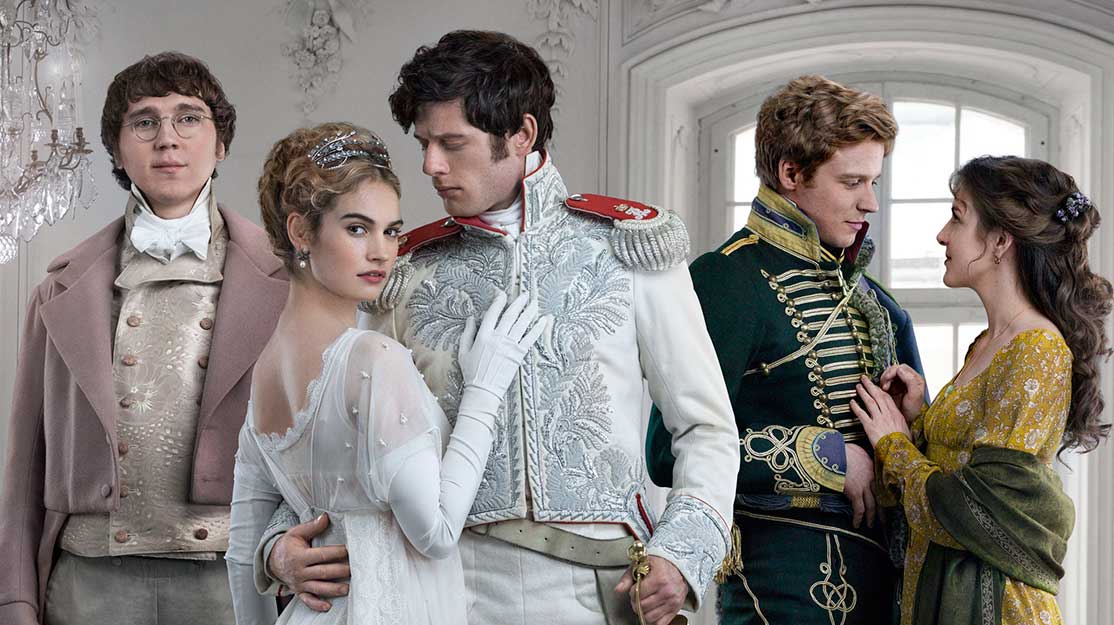 Writer Andrew Davies has slimmed down Tolstoy’s epic novel War and Peace into a new six-part drama for the BBC. DQ hears from the creative team behind this lavish production.

For anyone who’s always wanted to read War and Peace but never found the time, Andrew Davies might just have the answer.

The acclaimed writer has previously adapted Charles Dickens’ Bleak House and Jane Austen’s Pride and Prejudice and Sense and Sensibility, among others.

But now he has turned his attention to Tolstoy’s weighty tome, condensing it into a lavish six-part drama for BBC1 that will premier on January 3.

“I’d never read War and Peace; I’d been saving it up for my old age,” he jokes. “So I was pleased when Faith (Penhale, then head of BBC Wales Drama but set to become joint CEO of Lookout Point in February) invited me to read it with a view to adapting it. I took it on holiday and read it on a beach in Antigua and came back very enthusiastic about the book and very positive. It’s a little bit difficult to get into at the beginning but I’ve sorted it out.

“You have to remember the names of three families, that’s all it is. Nobody need bother reading it now because I’ve got all the best bits out of it! I didn’t find it too daunting. You have to be very arrogant to take on these jobs with these great works of literature and not be frightened of them. I give my own interpretation, take the bits that I love and express them as well as I can.”

It’s produced by BBC Cymru Wales Drama, in partnership with The Weinstein Company, BBC Worldwide and Lookout Point, while Tom Harper is on directing duties.

“It’s the weight of it – everyone looks at it and goes ‘Oh, no!’ People don’t even want to start it,” producer Bethan Jones says of Tolstoy’s 1,300-page book. “How many of us have it on our shelves and have never read it? But we were looking for a piece that hadn’t been done for a long time, something we thought was due, that we needed to make, something we felt had a contemporary feel.

“It’s all about young people – their lives, their loves and the mistakes they make; the things they go through and the process of growing up, emotionally as well as physically.”

Rea, who plays Prince Vassily Kuragi, adds: “Sometimes the translations of War and Peace are very poor or heavy-handed, but the first thing I saw with Andrew’s script was how easy it would be to play. The language was light and easy. It’s an incredible piece of work.”

Davies focused the story around three characters in particular. Pierre, Natascha and Andrei are at the heart of the story, with their families and their relationships built into the wider narrative.

The writer’s preference for focusing on youth was shared by Harper. Jones says: “Tom’s brilliant. He’s very young and he brings youth to the piece so it feels very contemporary – not through any wobbly camera style but through the real, young heart he’s brought to the show. Tom also works so well with the actors and draws out interesting, fresh performances.”

Filming for the production took place across six months in Russia, Latvia and Lithuania as the production team quickly decided that 19th century Russia couldn’t be replicated on the backlots at studios such as Pinewood.

“It felt important for the creative direction of the show that it should feel very authentic,” says Penhale. “If we were building, we would have had to build five Russian palaces, which, given the budget, wouldn’t have been feasible. But it also mattered to us that we shot in St Petersburg, that we went to some of the locations where some of these events would have taken place. It adds to the sense of truth and naturalism to the production. I hope viewers get a sense of Russia as a character in the piece.”

The seven-year timespan during which the story takes place also meant the crew was always on the move to film scenes at each location in both summer and winter.

“We started in January in winter in St Petersburg and moved to Lithuania, and we did some in Latvia as well,” explains Jones. “As the seasons wore on, in the beginning of the summer we went back to St Petersburg, so it was a very well-thought-out shoot. The crew were brilliant.”

Overseeing such a huge production did have its challenges, of course, and none so big as the language barrier. “We’d be doing a big scene with lots of extras, either military or a huge dance scene, and we’d have English, Lithuanian, Russian and Latvian speakers,” Jones recalls. “If we had any huge challenge, we couldn’t move as swiftly because we were having to tell everybody in their own language what to do. It was fascinating, though, I really enjoyed it. A couple of us are also Welsh speakers, so we threw that into the mix and really freaked them out!”

Hollywood producer Harvey Weinstein might be best known for award-winning films such as The Artist and The King’s Speech, but within 24 hours of BBC1 announcing its plans to adapt War and Peace, he was on the phone to Penhale to help bring his “passion project” to life.

“Harvey tracked me down to my office in Cardiff and was ringing repeatedly on the hour,” Penhale says. “We had a great phone call where he said, ‘If you’re doing War and Peace, I want to do it. This is my favourite book of all time,’ and it went from there. It’s really born out of his passion for it.”

Negeen Yazdi, president of international production at The Weinstein Company, says of the coproduction process: “The project matches the ambition, scale and material we want to be working on. With the BBC, we discovered very quickly our tastes were aligned, our ambitions for the project were aligned and that we’re not that different in the way we work. We’re all committed to the show and, above all, the show comes first. Like any working family relationship, there were disagreements and discussions but all in a very healthy way.”

Once The Weinstein Co was onboard, War and Peace was subsequently picked up in the US by A+E Networks-owned Lifetime, A&E and History, which will all simulcast the series from January 18 next year.

“The BBC and Weinstein marriage has been a surprisingly effective and powerful thing, in terms of both attracting talent and cast and making a statement to the industry that this is a big deal and you’d better pay attention,” says Simon Vaughan, CEO of Lookout Point. “That’s what it takes to get heard in a marketplace where thousands of new hours of TV are being produced each year.”

Vaughan adds that while coproductions of this magnitude can be tricky to navigate, all parties united behind Penhale’s leadership to bring the series to air.

“It’s about leadership – who’s the boss?” he says. “Faith was the boss and we all work for Faith. That is how it was from the beginning. As difficult as some moments were, when a call needed to be made, it got made. Somebody has to drive the train and if you don’t have that, run a mile. I’ve been around the block and done difficult coproductions and if there isn’t one clear leader, forget it. Don’t make it.”

As with any adaptation, plot points and character details have been chopped and changed, but Jones says Davies’ War and Peace is “very true” to Tolstoy’s original text.

“Inevitably there are some changes and characters that aren’t there – otherwise we’d be doing a 95-part series,” she says.

On the back of Doctor Who and Sherlock, BBC Wales has built up an impressive drama slate, and War and Peace is set to be the most ambitious yet.

“It is a great place to work,” Jones adds. “It started some time ago with the regeneration of Doctor Who. We’re quite bold. It’s very small but tight and hardworking team. We like to push ourselves.”