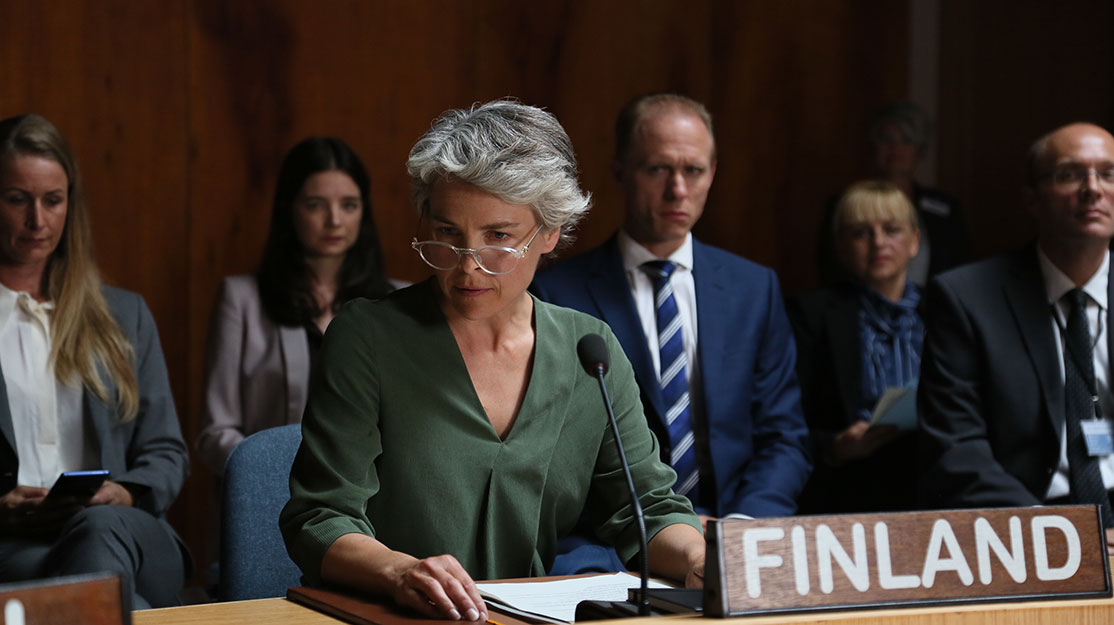 Johanna Enäsuo and Marko Röhr from Finland’s Matila Röhr Productions speak to DQ about the making of political thriller Peacemaker, in which a negotiator is pulled into an escalating international conflict.

When Ann-Mari Sundell becomes involved in a human rights scandal, UN secretary general Theo Slobo offers her a way to rescue her career: by cooling tensions between Turkey and the Syrian Kurds and overseeing peace negotiations. But 10-part political thriller Peacemaker takes viewers further into the complicated web of international diplomacy, as Ann-Mari finds herself in a deadly power struggle involving terrorists, the illegal arms trade and the global oil industry that stretches from New York to Saudi Arabia.

But though the story is fictional, producers Johanna Enäsuo and Marko Röhr were heavily inspired by real life while developing the series, not least in the form of former Finland president Martti Ahtisaari, a Nobel Peace Prize laureate who also worked as a UN diplomat and was recognised for his role in resolving conflicts in Namibia, Indonesia, Kosovo and Iraq.

“There are so many drama series about wars and conflicts but no one has actually done anything about peacemaking and what the process is like,” Enäsuo tells DQ in Berlin, where Peacemaker had its international debut at Berlinale earlier this year.

“What does it mean for those extraordinary people in extreme conditions? Usually, their normal life is unbalanced as well. So as a drama, it’s a really interesting world because Peacemaker is a really character-driven story. It takes place in one of the worst conflict zones in the world, a crisis between Turkey and the Kurds, but it tells a story about people.”

As you might expect for a story set in this complicated world, the producers built an “amazing network” of political advisors and people with experience in peace negotiations to support the development of the series, which is written by Eriikka Etholén-Paju and directed by AJ Annila.

“We met hundreds of people and did the research over so many years with the scriptwriter. It’s an interesting world and, during the writing process, the world around us changed so rapidly that the real world is stranger than fiction,” Enäsuo says. “The political plays of superpowers and their leaders are so unpredictable. We felt we needed to add more in the script because the world around us has become crazier than five years ago.”

“It’s a multi-layered story. It’s like an onion,” continues Röhr, CEO of MRP. “The starting point is the negotiator, who is dealing with the crisis with Turkey and the Kurds. We also have the illegal arms trade, we have the superpowers. All of a sudden, we realise it’s actually the oil industry that’s mixed in as well. It evolves into a huge crisis and they’re negotiating with people who have other issues and they have to try and solve the problem. To me, it’s more of a thriller.”

At the centre of the action is Ann-Mari, who seemingly always finds herself in the crossfire of two opposing sides, whether in a gunfight or at the negotiating table.

“She’s the leading soul,” says Enäsuo. “Most of the series is about people who are working in extreme conditions. It’s really challenging how your whole identity is found in the evil of the world. It has been interesting. We have spent so many hours with peacemakers and people who have been working in these zones to find out what life is like for them and how it becomes unbalanced so easily.”

Enäsuo stresses that everything in Peacemaker – which came with a budget of €7.7m (US$9.10m) – is based on factual research, although the series was overtaken by real events when Turkey and neighbouring Kurdish forces clashed towards the end of last year and again this year.

“It feels like we have been following the headlines but we did the research for many years,” she says. “When Turkey actually attacked Syria and the Kurds last fall, real life changed so rapidly. We still had some shooting days left, so we were able to adapt our story to what is happening now. Even if it’s fictional, we wanted it to feel truthful to what is happening in the world and in politics. We were able to still react.

“We had some really important scenes left about the peace negotiators, the closing scenes, and when Turkey actually attacked, the news looked like it was straight from our script. It was a little bit scary but, at the same time, we were able to adapt. Nobody knows what is happening in the world with these leaders. It’s quite crazy, but we wanted to do everything we could and I think we succeeded with the story. It’s an important story to tell.”

The series, which debuted in Finland on Friday and will also air on public broadcasters across Scandinavia, is described as a very global story, but one that has taken its lead from the Nordic region, particularly when it came to creating the show’s protagonist.

“In the real world, Finland has the most diplomats and ambassadors in the world who are women, working in countries such as Turkey, Afghanistan, Indonesia and Saudi Arabia, so we have met them and they have shown us how they have handled their work in real life,” Enäsuo reveals.

“They need to work hard and show the really male-dominated societies they know what they’re doing, so the influence [on our show] is from there. For us, it was obvious the leading role had to be a woman. Even though the story takes place in Turkey, Syria and southern Spain, it’s really important that it has Nordic DNA in its values. It has that identity. You can see it’s a Nordic series through the content, but its playground is the whole world.”

Distributed by Reinvent Studios, Peacemaker was shot over four-and-a-half months primarily on Gran Canaria in the Canary Islands, with additional filming in Sevilla, Spain. A second unit also captured footage in New York, Berlin and Istanbul.

“During the scriptwriting process, at times Johanna would come to my office and say, ‘We’re now going here and here,’” Röhr recalls of the multi-location story. “I said, ‘Don’t worry, we’ll find a solution.’ It’s easier to find a way [to film these scenes] if you have a good story. There’s always a way to do it.”

“When you have a good creative team around you – the production designers, DOP, director – and they see the world in the same way, magic happens,” Enäsuo says. “We were really lucky in the Canary Islands that they have the variety of landscapes we needed. It was amazing.”

Despite the show’s high-stakes plot, which plays out in English, Finnish, Turkish, Kurdish and Swedish, both Enäsuo and Röhr come back to the characters at the centre of the story, who face numerous challenges through the series.

“Our wish is that even those people who aren’t interested in world politics will also watch the series,” Enäsuo says. “They need to relate to those people, and their own personal crises have to be recognisable.”

“There are so many thrilling elements they have to face, going into places where there is a threat to your life all the time, when you have to negotiate face-to-face with someone who is considered a terrorist,” Röhr adds. “We have a character, Ann-Mari, who is morally so strong that she takes decisions knowing they could end her career but decides to take a risk. I really admire people like that on this planet. It’s a great character.”