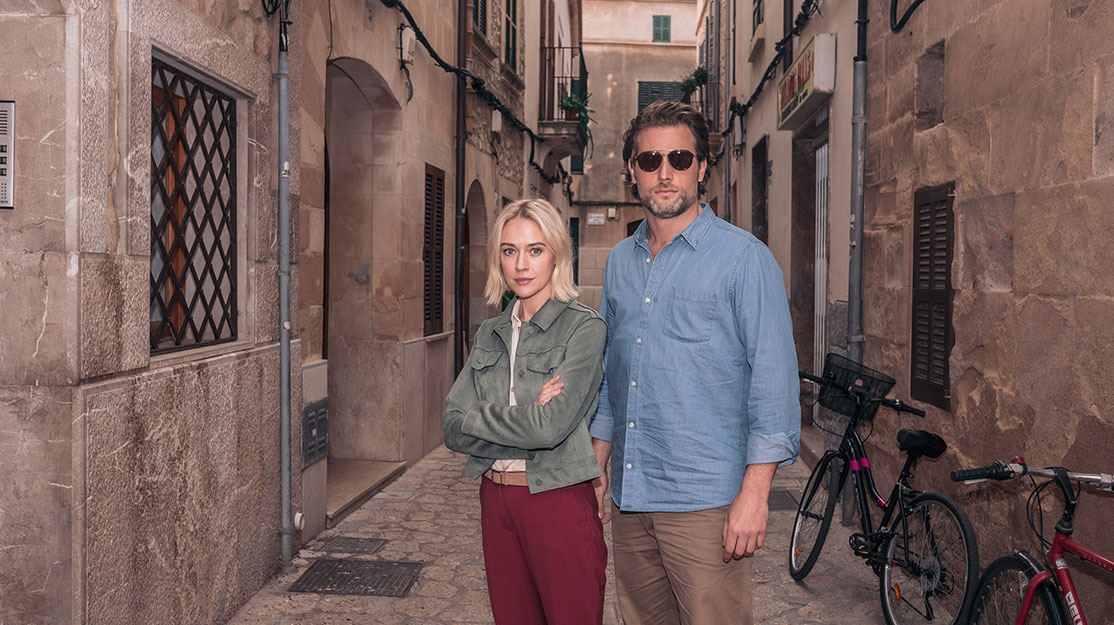 Making it in Mallorca

In the autumn of 2019, BBC crime drama The Mallorca Files swept viewers away to the eponymous Balearic island and introduced two mismatched cops – one British, one German – who are forced to work together to solve crimes in the Spanish sun.

The series now returns to BBC1 today for its second season, picking up with police officers Miranda Blake (Elen Rhys) and Max Winter (Julian Looman) in six new episodes that were filmed on location in Mallorca before the coronavirus pandemic took hold last March. However, with a 10-episode renewal in hand, the choice was made not to return to film the final four episodes that had already been written.

In season two, following her decision to stay on the island, Miranda settles into her life on Mallorca and is coming to terms with Max’s quirks. She’s even starting to build a rapport with Palma Police Chief Ines (Maria Fernández-Ache). But the duo soon find themselves thrown back into action to investigate the murder of a world-famous Mallorcan opera singer; the devastating legacy of the Spanish Civil War; the stalking of a rising football star; childhood love and jealousy; bird smuggling; and an apparent parricide.

Each episode again features a self-contained story, which executive producer Ben Donald says made the decision to cut the season short much easier.

“We were one of a number of productions that were hit by Covid but we’re an episodic series, and we were in the fortunate position of having just completed six episodes, which is a good number for any standard drama series,” he tells DQ. “Arguably, it enabled us to make a clearer and more rational decision around the suspension of production rather than keeping people in limbo, because we could see a clean break.

“As it turned out, there was no prospect of getting back into production so, in a way, it was a silver lining. And as a producer, it’s great to have a show that we were able to complete. We stopped in the middle of March [last year] and completed post-production by the middle of August, and are fortunate to have new content going on the airwaves this winter, which is not the case for lots of producers.”

As a production that employs cast and crew from across Europe, The Mallorca Files would have proven particularly complicated to restart once filming was possible again, with the majority of people needing to fly to Mallorca from mainland Spain, the UK, Germany and Austria.

“Travel bubbles and all that stuff have become part of our vocabulary over the last nine months, but it would have been tough,” Donald says. “We hope to be asked to make more and go back there when its more manageable, but we finished six episodes and we’re very happy with the second season.”

In season one, Miranda was introduced as someone marooned in a place she didn’t want to be, spending most of her time trying to get away. But season two sees her more settled, while she and Max have become trusted members of the Spanish police force and deemed worthy of dealing with crimes beyond those involving drunken expats.

“We wanted to give people more of the same of what they loved the first time around,” Donald says. Some of the new locations are particularly impressive, with filming taking place at the Cuevas del Drach, the underground Caves of Drach in Porto Cristo, and at football club RCD Mallorca, where the production was given permission not just to film in the stadium but also on the pitch at half time during the then-La Liga side’s match against Valencia.

“A lot of the episodes are not just filmed in one or two places, they’re composites that we put together by filming in lots of different places to create these worlds,” the producer continues. “One of the USPs of the series is that, despite it being an episodic series, it’s not heavily formatted, and every episode can give you a surprising look in terms of whether it’s a film reference – the second episode has a noir theme – or the football one, which is about a guy from the favelas.

“We’re trying to do different things in terms of the visual world each time. We’re just pushing that a bit more in season two. We also have Elen and Julian riding on horseback in the wilderness. I’d like the audience to think, ‘Where will they go next?’, rather than, ‘They’ll serve up more of the same.’”

As well as numerous locations, each episode is also populated with a host of new faces who take up roles in that week’s crime story. Casting director Vicki Thomson says The Mallorca Files is “an easy sell,” owing to the short shooting time required for guest appearances and its idyllic location. “Agents phoned me after watching the first season and were like, ‘Here are my clients. They would like to work in Mallorca. Please give me a call,’” she reveals.

Thomson started her career working on series such as Hustle and Waking the Dead, before going on to shows including The Smoke, Broadchurch, Grantchester and Riviera. She has also worked on US series like Rosemary’s Baby and The Royals and international series Deutschland 86 and Unorthodox, and has noted how authenticity in casting has become a key component of television production.

“You used to be able to cast an English person putting on an accent, but these days that just doesn’t happen,” she explains. “People want authenticity and it’s so much easier to get. When I met Ben to talk about the show, we were very clear we wanted to look in Spain and Germany for the leads. In season two, we looked for Eastern Europeans and just tried to widen the scope as much as possible.”

“Mallorca as an island has an incredibly diverse population and diversity in its own microcosm,” notes Donald. “It has a huge British and German population, a large Swedish population and vast numbers of tourists of different nationalities. It is international by definition, but we wanted a show where it’s also very normal for those people to speak English because it’s the common language that allows the whole island to operate. It’s much more likely a cop would speak English in the role of Miranda than she would learn Spanish. We have a little bit of Spanish in the background, but it’s fundamentally an English-language show.”

At the beginning of the series, Thomson spent several weeks in Germany and Spain meeting dozens of actors and building up a huge database of people who could speak English fluently.

“There are probably 10 roles in each episode and, of those, six are typically Spanish,” she says. “Then there are usually a couple of guest roles that are English, and it is just me and my assistant Lucy Allen. It’s a really fun show to work on and it’s not a hard sell.”

“Cristina is huge in Spain and we’re so lucky she would do an episodic show,” Thomson says. “I had an email from a fan in Hong Kong saying they love Cristina Castaña and can’t wait to watch the show, so it’s interesting how Spanish actors have a reach we don’t necessarily know so well in the UK. But the fact it is so big in other territories is a really big sell for a Spanish actor, which I didn’t necessarily appreciate in advance. Even though we’re selling it as an English-language show and that’s the real push, the worldwide nature of the show is huge.”

As for the leading duo, the casting director says she had been tracking Rhys for some time before the actor landed the role of Miranda.

“She’d gotten close to a few huge roles so, when we met to discuss those two leads, I had a shortlist of names I wanted to meet right away and Elen was on that list,” she says. “Then with Max, it was a bigger search. I had a few names but we wanted to see as many actors in Germany as possible. We wanted to look for the best possible pairing and, across the whole show, we’ve never focused on ‘names.’ When we got down to a shortlist for Max and Miranda, we put them [Rhys and Looman] in the room together and it just was ridiculous how good the chemistry was instantly. It couldn’t really be anybody else but those two.”

Amid the ongoing pandemic, casting new series relies more on self-taped auditions than in-person meetings, which Thomson admits is great for seeing as many people as possible. What it lacks, however, is the opportunity to make new discoveries or see how actors respond to different directions in a room.

“It’s a tough balance because you can get too many people to self-tape and then a lot of actors feel like they’re just sending them into the ether and they don’t know they’ve been watched,” she says. “Whereas if you’re in the room, you can really work with actors and get a performance that suits what you’re looking for. I work on a lot of American shows, and a lot of that is self-tapes. I just much prefer being in the room.”

Donald and Thomson are now working together again on an as-yet-unannounced project, but a third season of The Mallorca Files – produced by Donald’s Cosmopolitan Pictures and Clerkenwell Film and distributed by BBC Studios – is already in development, with Donald waiting to see the audience’s reaction to season two and hopeful that the BBC will officially confirm the show’s return.

“We have big plans for a season three should we be asked to make some more,” he says. “I couldn’t think of a better time to be going out with a feel-good, blue-sky show about a place you might have once visited and may be able to visit in the future. All eyes are on the next couple of months, and hopefully people want us to make more.”