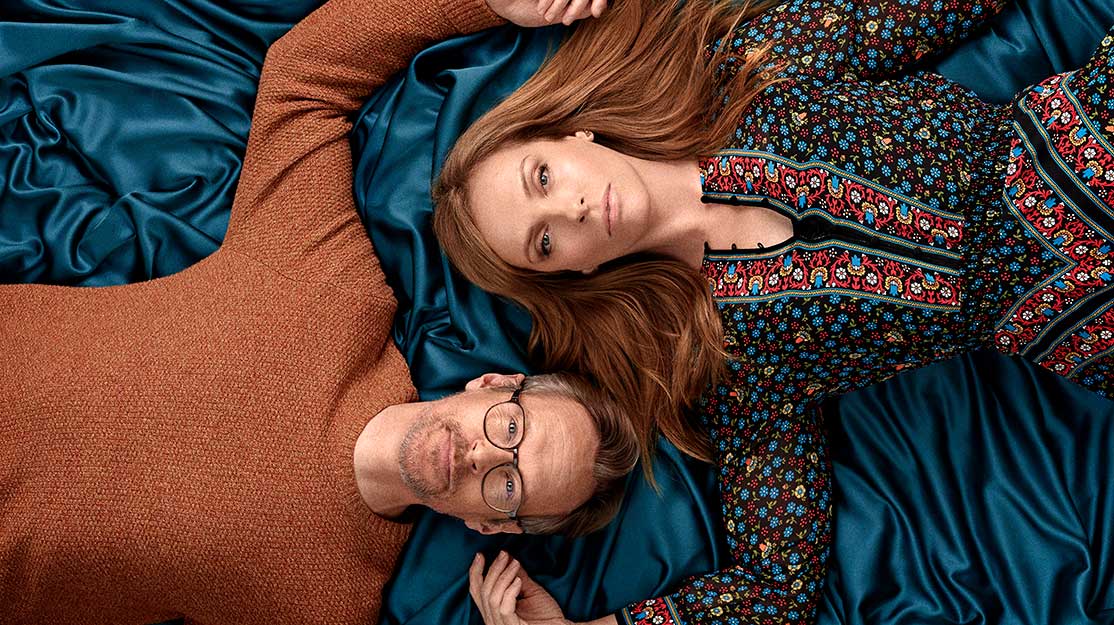 Toni Collette and Steven Mackintosh tackle complicated matters of the heart in Wanderlust, a bold, stylistically fresh and funny six-part drama for BBC1 and Netflix. The stars, writer Nick Payne and director Luke Snellin reveal why this series stands apart from anything else on TV.

From the start of episode one, there’s something different about Wanderlust. Whether it’s the naturalistic dialogue, offbeat soundtrack, title design or the extremely unsexy sex scene that plays out in the opening few minutes, it has all the hallmarks of a quirky indie movie – not a six-part series commissioned by BBC1.

“It really is a special thing,” says Piers Wenger, the BBC’s director of drama commissioning, of the funny and extremely honest portrayal of one multi-generational family’s attitude to love, sex and relationships. Wenger adds that he’s “proud – and slightly terrified – to say we’ve never seen anything like it before on BBC1.”

Award-winning playwright Nick Payne’s first television series, Wanderlust follows Joy Richards (Toni Collette), a therapist struggling to keep the spark in her marriage to teacher Alan (Steven Mackintosh). As the story progresses, it looks at how people build and maintain relationships and asks whether lifelong monogamy is possible, or even desirable, with Joy and Alan reassessing their relationship amid stories of love, lust and forbidden desire.

“It’s real people grappling with real stuff,” says Mackintosh, noting the show’s lack of heroes or villains. “There’s no high concept here, it’s not heightened in any way. This is an ordinary household, a loving couple who love each other and are grappling with where to go from here. It’s life. For me, it’s completely real.”

Collette agrees Wanderlust is extremely lifelike and reflective of the situation in which many couples find themselves after several years of happy marriage. “But nobody really talks about it,” she continues. “All of the characters are so real and so complex and so warm and likeable, even when they’re messing things up – maybe even more so.”

The Australian actor, best known for film roles including Little Miss Sunshine and recent horror hit Hereditary, says she knew she wanted to play Joy after “devouring” the scripts. “This was like, I will die if I don’t do it,” she recalls. “The writing is so beautiful and it has so many layers and says so much in a very subtle manner. There were a lot of lovely things to play with. I knew I wanted to do it straightaway.”

Having starred in her first television series, Showtime’s United States of Tara, in 2009, Collette says she is excited by the characters now being written for the small screen and praises Payne’s scripts and the distinctive voice he lends to the drama. “This is pretty much the best writing I’ve ever worked with and one of the best jobs of my entire career,” she says. “I’m a 45-year-old woman and I’m a pig in shit. Even through the rain in Manchester [the city in the North West of England where Wanderlust was filmed] through the winter, it’s still a highlight.”

Mackintosh was no less enthused by the prospect of starring the series, calling the decision a “no-brainer” and revealing that every pause, ‘um’ and ‘err’ on screen were written into the script, rather than being improvisation.

“The humour is fantastic in it, and with Nick’s writing you instantly feel how a scene should be, you feel a sense of the pace,” he says. “I love the meandering sentences that end up gently funny and awkward. That’s what feels completely real and wonderful about the whole thing. It’s incredibly poignant; it’s moving but the humour is always bubbling right below the surface.”

And despite some initial nervousness, neither Mackintosh nor Collette had any reservations about the sex scenes called for in the script. “I think I got quite used to it,” Collette says. “You can’t half-heartedly act that. You have to make it feel real. So I was nervous at first but the more steeped I was in the story, the easier it became.”

Mackintosh (Kiri, The Halcyon) adds: “Often with sex on television, when I watch something, I’m taken out of the story and feel like I’m suddenly watching two actors in a specific scene, rather than two characters. But with this it’s so intrinsically part of it. And the way Nick writes – the awkwardness, the fumbling and the bits in between – it’s really rooted in these people trying to figure things out, and that just feels completely real to me.”

Produced by the team behind Doctor Foster, Wanderlust comes from Drama Republic and is executive produced by Roanna Benn, Jude Liknaitzky and Lucy Richer. Kate Crowther is the producer. BBC Studios is the international distributor, with coproducer Netflix airing the series worldwide outside of the UK.

The show emerged from a play Payne wrote in 2009, which was performed the following year at the Royal Court. He then met Benn and Liknaitzky, who were on the lookout for a TV drama about sex and relationships and enquired whether he would like to adapt his play.

In the transition from stage to screen, Joy became a therapist, a decision that opened the door for the show’s honest portrayal of sex – something that will certainly become a talking point as the series progresses.

Payne met lots of therapists during his research for the show and says they spoke pretty frankly about the subject. “I just thought, ‘Why don’t I give it a go and see if we can do it like that?’” he says. Romantic dramas don’t often dramatise sex, preferring to focus on the build-up and then skipping to the following morning. “I guess I’ve always wondered what happens if you make the sex the driver of the story, so you explore all these romantic lives through all the shagging,” the writer adds.

Like being in therapy, though, this series doesn’t offer all the answers at the beginning. “Joy says at the start [when meeting a new client for the first time], ‘This is going to take years, there are no quick fixes,’” Payne adds. “I’m trying to say to the audience this isn’t going to be a story-of-the-week, it’s going to traverse the whole six hours. I tried to be truthful to the act of therapy but, at the same time, you have to cheat to make a story.”

Behind the camera is director Luke Snellin (The A Word, Our Girl), who matches Payne’s rhythmic dialogue with his own visual style composed of lingering wide shots and extreme close-ups of the actors.

“We set out to do something that felt very different and not for any other reason than the writing felt so unique and interesting, so we just felt we were trying to service that the whole time,” he says. “We’re so used to TV tropes and ways of being given information or ways of consuming stories that it felt like we should try to make a break from that and explore things from a different point of view visually.”

Echoing Mackintosh, Snellin says the pace of the series was inherent in Payne’s scripts. “I read it on my own in my house and I read both episodes in one sitting without stopping. That’s a good sign,” he says. “In TV there are so often moments where characters stop and think about things that don’t feel very real. It’s a show totally rooted in naturalism.”

If there’s one line that could sum up the series, it’s something Joy says in episode one: “We’re very bad at talking about our private lives in public.” It goes someway to explain the awkward situations and meandering sentences Mackintosh acknowledges, and Payne says the line is a direct quote from someone he spoke to during his research.

“For some reason, we struggle. We have a similar struggle with death and grief, I think, to find a language for it, to feel safe and supported with the people close to us to discuss it,” he says. “It’s a shame we struggle but it’s obviously useful for me dramatically because then we get a whole show out of people being repressed.”