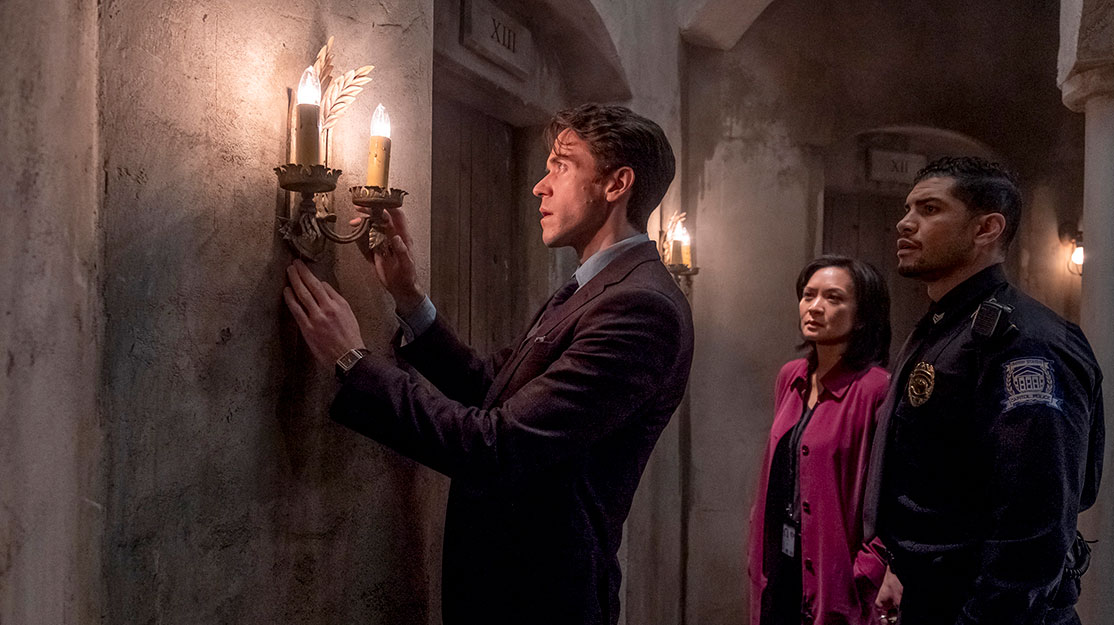 Three of them – The Da Vinci Code, Angels & Demons and Inferno – were brought to the big screen between 2006 and 2016 by director Ron Howard and Tom Hanks, who starred as Brown’s protagonist.

Now, the third novel in the author’s series, The Lost Symbol, has arrived on television via US streaming service Peacock. But rather than set the story within the established film franchise, the show takes place before events in the movies and will introduce a young Langdon (played by Ashley Zukerman), who is called on to solve a string of deadly puzzles in the hope of saving his kidnapped mentor Peter Solomon (Eddie Izzard) and thwarting a global conspiracy. He is joined on the chase by Peter’s daughter Katherine Solomon (Valorie Curry), who has a romantic connection to Langdon.

Dan Brown’s The Lost Symbol, as the series is called, is still shooting in Toronto ahead of its Peacock debut today. And when DQ speaks to showrunners and long-time writing partners Dan Dworkin and Jay Beattie (The Crossing), they have yet to write the finale.

“It’s an aggressive schedule because they wanted us to premiere in September, so it’s not your typical streaming schedule where you get the scripts written before you shoot,” Beattie says. “It was just a unique situation. The pandemic certainly didn’t help, but we all knew what we were getting into.”

Produced by CBS Studios, Imagine Television Studios and Universal Television, the project had already been in development at US network NBC when Dworkin and Beattie came on board in October 2019. They wrote a pilot under the prospective title Langdon, which was then picked up and scheduled for production in February last year – until the Covid-19 pandemic took hold. Filming did eventually begin in December, before the show was a handed a series order, and a move to streaming sibling Peacock, in March this year. ViacomCBS Global Distribution Group is handling international sales.

“It came to us with the idea of taking this book, which is the third in the Langdon canon, and actually turning it into the first in terms of the timeline, making him a younger character and making this his first adventure,” Dworkin explains. “We thought that was appealing, rather than just kind of plopping down into a timeline that’s already been generated. We liked the opportunity to make him slightly more brash, more rough around the edges, more overwhelmed and more sceptical.

“Dan Brown would talk about how in the Tom Hanks movies, Langdon’s a little bit more open to other points of view. We thought it might be a little more interesting to have a character who hadn’t arrived at that point yet and was a little more stuck in his own ways. When he goes on this adventure in our season, it starts to open his mind a little bit.”

Brown’s novel, which focuses on a mystery surrounding the Freemasons set across Washington DC, provided the writers with a road map on which to base the series. But with 10 hours of television to fill, there were also numerous opportunities to introduce new characters and stories.

“There are some quintessential puzzle moments within the book we knew we needed to hit, so that was helpful because we knew generally where things were going and how it was going to end,” Dworkin says. “This is the first thing Jay and I have ever adapted, so we weren’t sure how it was going to go. But it’s been good. Then to collaborate with Dan Brown, he was more collaborative than I probably would have ever been if I were him. He was open to everything.”

Brown read all the scripts and would always be at the end of an email if the writing team had questions about historical references or a specific puzzle laid out for Langdon to solve. And like Brown’s novels, the series also opens with a ‘fact page’ that roots the central mystery in real life.

“There was a lot to research in terms of just gaining an understanding of what’s happening in the book and exploring the Freemasons,” Beattie notes. “One of the challenges of adapting the show is Dan Brown can take five or 10 pages to explain something but we have to distil it down into bitesize TV scenes because the pace of television is obviously far different from a novel.”

Notably, Brown himself said at the premiere of Inferno in 2016 that the reason The Lost Symbol hadn’t been brought to the big screen was the fact the filmmakers behind the other movies hadn’t worked out how to turn the “cumbersome” book into a good feature.

“The first time they tried writing a movie, the Katherine character and her whole subplot about being a scientist was just gone,” Beattie says. “Dan Brown talks about seeing the first cut of The Da Vinci Code when it was about three-and-a-half hours long, and he’s like, ‘Where’s the rest of the book?’ I think Ron Howard said something like, ‘Wait until you see it at two-and-a-half hours.’

“But we’ve been able to capture a lot in 10 hours of television. There’s still quite a bit that we couldn’t fit in. Of course, you invent your own things, so you have to make room for that too. It’s a good balance of what fans like about the book and there’ll be some invention there to keep people on their toes. But we always find our way back to the spirit of the story and of what Dan wrote.”

Brown’s style of writing in short chapters, plus the chase structure of the story, gives The Lost Symbol a natural momentum as Langdon hurtles from solving one puzzle to the next in the hope of saving his mentor. On location in Toronto, visual effects were used to complement sets built to replicate the Library of Congress, the Washington Monument and the masonic House of the Temple. The US Capitol rotunda was also recreated in two-thirds scale, complete with Constantino Brumidi’s fresco The Apotheosis of Washington, which forms part of the first clue that sets Langdon on his way.

The storytellers also found time to let the characters – and the audience – breathe on occasions when the symbologist needs to lie low as the CIA pursue him across the city.

“Production-wise, it also just becomes untenable to have him in so many different places throughout the course of an episode,” Dworkin says. “We just don’t have that much time to shoot all that. But we always to end with a cliffhanger. There’s always a set piece or two where it’s moving really quickly and there’s lots of tension. But the first two episodes and the last couple of episodes will best exemplify the super-fast pace.”

In fact, Dworkin says the show’s quieter moments, most commonly shared by Langdon and Katherine, are among his favourites.

“Ashley, who plays Langdon, has this wonderful face that is just so expressive and conveys so much emotion, so it just begs to have scenes like that, which are slightly more reflective and character-based. Ditto for Valorie, who plays Katherine. One way in which we build upon the book is there’s the promise of a romance. Langdon and Katherine are not a couple running around, but there is a lot of romantic tension there because of their history in the show. That informs a lot of their scenes together.”

Beyond The Lost Symbol, both showrunners hope Langdon will have the legs to run for several more seasons, though any decision on the show’s future – and whether further seasons would be original stories or adaptations – has yet to be made.

Until then, they hope viewers will get behind this story featuring “a classic Jimmy Stewart-Cary Grant everyman who’s pulled into a situation that’s so far beyond anything he can deal with,” Dworkin says.

“I just love those types of stories, he’s total fish out of water. Here’s a guy who’s not equipped to deal with the types of threats he’s now being faced with. People’s lives are in his hands. And yet he does deal with them through his intellect and his will. I think people will be into it – and the actor’s really good. People are going to really like Ashley.”