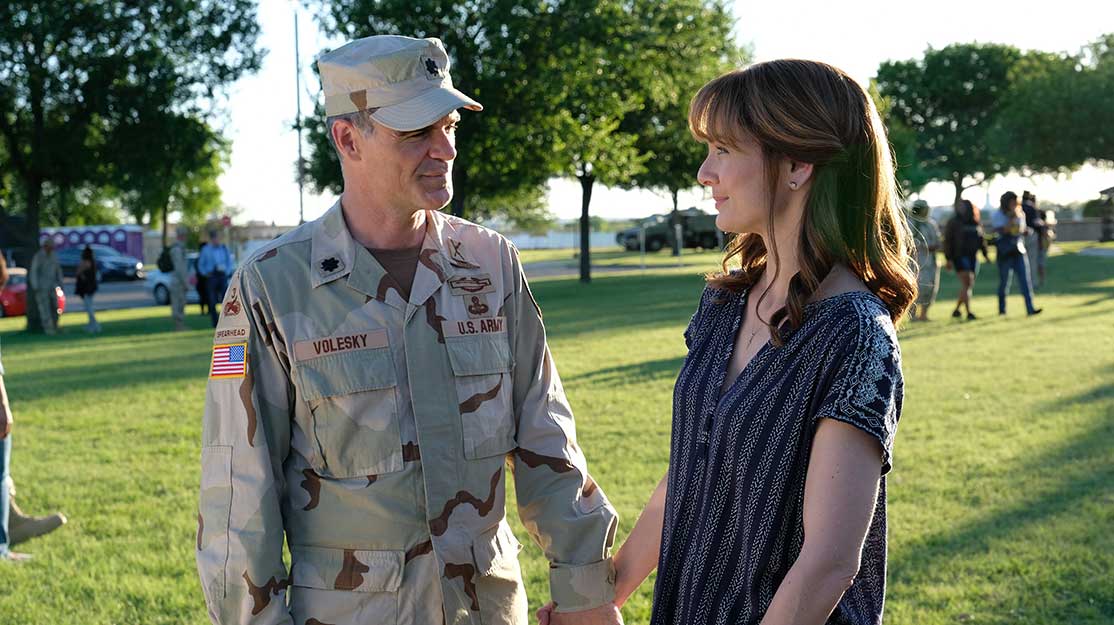 Best known as the scheming Doug Stamper in House of Cards, Michael Kelly heads into battle for his latest role. He tells DQ about how he was inspired to play a real life war hero in National Geographic’s The Long Road Home.

He’s not the first actor to play a real person on screen, but you’d be hard pushed to find someone who felt as much pressure to do justice to his role as Michael Kelly.

The House of Cards star takes the lead in National Geographic miniseries The Long Road Home, which tells the story of Black Sunday, when a small platoon of soldiers from the 1st Cavalry Division were ferociously ambushed in Sadr City, Baghdad, in April 2004. Eight Americans were killed and more than 65 seriously wounded.

The series, which launches in the US tonight, is based on Martha Raddatz’s non-fiction account of the events, adapted by showrunner and executive producer Mikko Alanne. Kelly plays Lt Col Gary Volesky (now Gen Volesky), the incoming battalion commander who was in his first hours of assuming authority over Sadr City as the battle broke out.

“It’s so fucking stressful,” he admits of playing someone who is still alive, still in active military service and “respected by his men like no one I’d ever seen before. So I felt a serious weight on my shoulders to do it as best I could. The more I learned about Gary and the more I heard about Gary from his men, the pressure became greater and greater.”

That pressure weighed more heavily once Kelly met a group of soldiers who had fought with Volesky. “They just looked me up and down with disdain and said, ‘Some tall shoes to fill, buddy. You better be ready.’ I was like, ‘Guys, it’s fucking hard enough. Give me a break.’

Kelly first met Volensky at the Fort Hood military base in Texas, the home of the 1st Calvary Division and where The Long Road Home was filmed, with a training field transformed into the Sadr City set. The actor and the real Volesky walked and talked together for a while until the general was told his car was waiting.

“He put his arm on my shoulder and was like, ‘Come on,’” The actor recalls. “He walked me over to this field and said, ‘What do you want to know? You’ve got to have some questions.’ I was able to ask him some things that I wanted to know. It was great, man. Having met him, I got it. I had him on a pedestal in my mind and when I met him, it got even higher. I understood very quickly what all of those men who served under him meant when they said those were big shoes to fill. I knew it, but then you meet him and you really know.”

Kelly had just finished a six-month House of Cards shoot when was offered the chance to play Volesky, moving his family’s spring break vacation to ensure he was available for filming. And his sense of responsibility to play the role the best he could was shared by the rest of the cast, among them EJ Bonilla, Noel Fisher and Jeremy Sisto.

Living together on the base, the cast also bonded during a pre-production training camp, which saw them on set wearing military gear, carrying rifles and learning how to clear buildings.

Filming The Long Road Home was “insane,” Kelly adds, recalling one scene where he is in a Humvee rolling through Sadr City, passing a burning automobile and being fired upon by enemy fighters hidden among the rooftops. “Another time, my Humvee got stuck and the insurgents were coming at us,” he says. “There were bed frames and a car and all these things the insurgents had put in the street to try and block our passage, and this Bradley [armoured vehicle] rolls by and just ploughs through all this shit and it’s on fire. Shit just goes flying – it was crazy.”

Thirteen years on from the real situation portrayed in the show, Kelly believes now is the right time to tell the story of The Long Road Home, with events far enough in the distance that they are no longer fresh but recent enough to invite reflection upon what happened. “It’s also a good reminder, at least with our story, of the true consequences and casualties of war,” he says, noting the way the series – distributed internationally by Fox Networks Group Content Distribution – not only focuses on the traumas experienced by those on the battlefield but also examines the reverberations felt at home.

Kelly is speaking to DQ during last month’s Mipcom, two weeks before a string of sexual misconduct allegations were made against House of Cards star Kevin Spacey. Netflix subsequently announced the forthcoming sixth season of the political drama would be its last, before suspending production entirely the very next day and then severing all ties with Spacey. The series won’t be back with its former star.

But regardless of when the political drama returns, assuming Netflix doesn’t shelve the final season entirely, it will always be the show that launched the SVoD platform into the original series business and helped to change television – both how it’s watched and how it’s made – forever.

Kelly says “not in a million years” did anyone foresee the impact House of Cards would have when it first launched in 2013, admitting that he struggled to understand why they would launch all 13 episodes at once.

“They were like, ‘Yes, that’s how the audience wants to watch television,’” recalls the actor, who plays Doug Stamper, chief of staff for Spacey’s Frank Underwood. “[Director/executive producer] David Fincher showed me a rough cut of episode one and my manager said, ‘How was it?’ I said, ‘We’re making something special. I don’t know if anyone’s going to see it.’ It was so good. It wasn’t like television; it looked like a movie. But I didn’t know if anyone was going to see it, because what was streaming then?

“That was five years ago, now look. I never dreamt it would change so quickly. What it did was create a platform for people to make very filmic production for television – and look at everyone who’s followed suit. It’s just incredible. And National Geographic is doing it, and has done it, with Genius, which was critically acclaimed [and heading into its second season]. I can only hope this one is too. Everyone’s willing to jump in the game wholeheartedly and not half-ass it. It’s a great time to be an actor.”