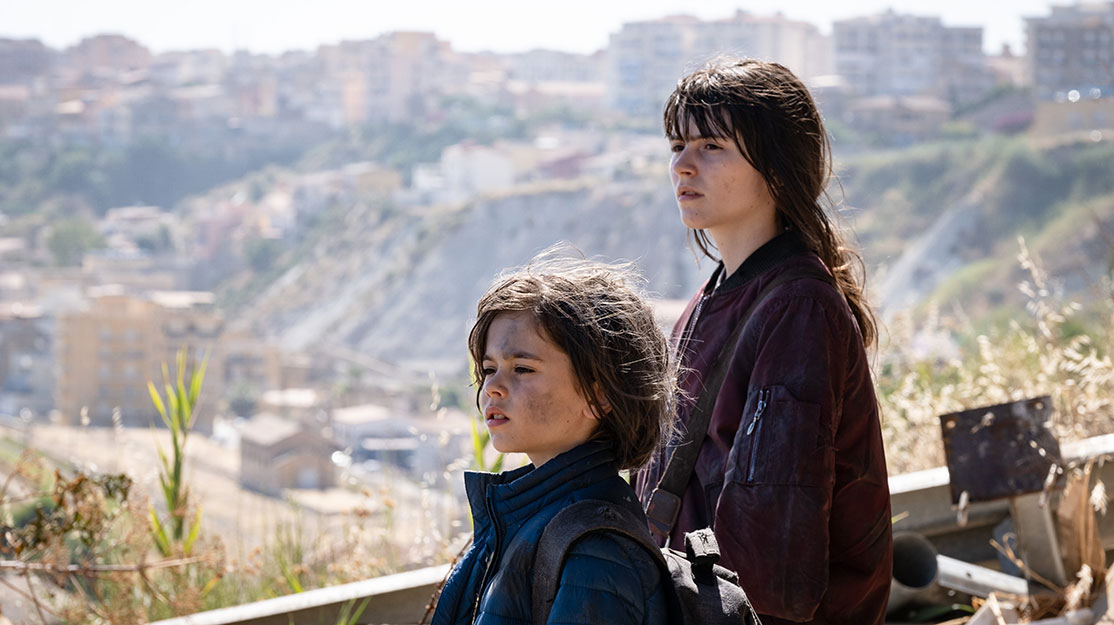 Star Giulia Dragotto and writer and director Niccolò Ammaniti tell DQ about making Italian dystopian drama Anna, in which the title character survives in a world where people only live until the age of 14.

Created and directed by Niccolò Ammaniti, Italian drama Anna is set in a post-apocalyptic world that has been ravaged by a virus that kills adults but spares children.

Based on Ammaniti’s book of the same name, the story follows the eponymous teenager as she sets off in search of her kidnapped brother, Astor. With her journey unfolding among parched fields and mysterious forests, the crumbling hulks of shopping malls and abandoned cities, in deserted wide-open spaces on an island reclaimed by nature and savage communities of survivors, Anna only has one guide: the exercise book her mother left her with instructions on how to survive. But with each passing day, Anna discovers the old rules no longer apply, and she instead has to make up new ones as she goes along.

Anna is played by 14-year-old Giulia Dragotto, who won the role against competition from more than 2,000 candidates. Nine-year-old Alessandro Pecorella plays Astor.

The Sky Italia series – Ammaniti’s second following 2018’s Il Miracolo (The Miracle) – is produced by Wildside in coproduction with Franco-German channel Arte, The New Life Company and Kwaï. Annaniti wrote the scripts with Francesca Manieri (We Are Who We Are). After its debut in April on Sky Italia, the Fremantle-distributed series was part of the international competition at French television festival Series Mania earlier this month.

Here, Ammaniti and Dragotto tell DQ about how they made they made Anna and overcame a real-life pandemic to tell the story of a fictional one.

Niccolò, why did you think Anna would make a good story for television?
Ammaniti: The universe in which Anna lives, with its precise rules–  you live until the age of 14, you can’t reproduce and adults have become extinct – is perfect for bringing out the different stories and memories of the past of the children who are the main characters of the narrative, interlacing hopes, madness, disappointment and adventure.

How did you adapt your own novel – has it been changed or updated in any way?
Ammaniti: After writing the novel, I still felt the need to narrate that world and the characters Anna meets on the way, and to expand, if possible, the dose of adventure. The series gave me this opportunity. There are a lot changes in the TV adaptation because it was the only way for me to become absolutely enthused with the directing.

What themes did you want to explore?
Ammaniti: The main theme is hope. Even when mankind has gone through the darkest of times, with apparently no way out, hope, that fickle flame that lights up our hearts, has never been extinguished. And so Anna is also a bearer of hope and faith in a better future.

What is your writing process?
Ammaniti: It’s a very long one, full of revisions, always alongside Francesca Manieri, with whom I wrote The Miracle and with whom I hope to continue working. It’s so difficult to find people with whom you can enjoy yourself and are capable of adding things you sometimes find hard to imagine.

How do we follow Anna through the story?
Ammaniti: Anna begins as a young child, then she becomes an orphan and Astor’s sister. She becomes a teenager in Angelica’s castle, she falls in love with Pietro, she discovers love, loses it and becomes a widow, then a mother and then an explorer of new worlds. Anna lives the life of an adult in just a few years. It’s not how long your life is that matters, but how you live it.

What visual style did you want for the series and how did you achieve this?
Ammaniti: The idea was to move as far away as possible from the bleakness of the typical post-apocalyptic shows. We used the Mediterranean and the nature of Sicily; the strength of the blinding sunlight together with the darkness of the baroque houses left without electricity. The colours are the fundamental matrix of the series.

Why was Giulia Dragotto the perfect Anna?
Ammaniti: Giulia has the melancholy character of those who don’t forget their past and offered the crucial contribution of someone born before us, who can imagine a future for themselves and for the ones they love. She also has the strength and obstinacy of a wild beast, necessary to overcome the obstacles that such a difficult world has in store for her every day.

Giulia, how were you cast in the role of Anna?
Dragotto: I took part in several auditions, which kept me busy for about a year. I was eventually chosen from more than 2,000 candidates.

What was the audition process like?
Dragotto: My first auditions went really badly. I was a bit fake and said my lines as if acting in a stage play. Despite everything, Niccolò and Lorenza [Indovina, Niccoló’s wife and actor] were always confident I could improve and we all worked hard together to help me get completely into the character.

What was it like to work with Niccolò?
Dragotto: My experience was nothing short of fantastic, thanks mainly to the people who stood by me and accompanied me on this wonderful adventure. Niccolò and I established a relationship of strong affection and friendship.

Did you read the novel beforehand?
Dragotto: I promised myself I would read the first half of the novel before shooting started and the other half at the end. I’m not sure why, but something told me to do so. I’ve recently resumed it.

How did you prepare for shooting each day?
Dragotto: The process to prepare for shooting was always the same; it only varied in terms of times and locations. I’d always study the scenes the day before shooting, shortly before going to bed.
I’d wake up at the right time – occasionally a little too late – get dressed, wash and go down to breakfast, then they’d come and pick me up with the van and take me to the base camp. This was where the real preparation for the day would begin: I’d have a little something to eat courtesy of the catering service, to cheer me up, especially when I didn’t find time to have breakfast at the hotel, and then move on to costumes and hair and make-up, the order of which varied according to the needs of the day. Then they’d microphone me and I’d go straight to the set.

What was it like working with Alessandro, who plays Anna’s little brother Astor?
Dragotto: I have to admit I’ve never been especially fond of young children. I’m the youngest in my family and have always been used to being with people older than me. Alessandro, on the other hand, was a nice surprise. He stunned me! I always described him as having the soul of an old man in the body of a child, and it’s true.
He showed me how an eight-year-old boy can be a thousand times more mature in his choices compared to an actual grown-up man. The relationship between Anna and Astor is the mirror of our real relationship. Conveying our relationship came naturally to me, I can’t really explain how. I couldn’t have hoped for a better partner in this adventure.

What kinds of stunts did you have to perform for the series?
Dragotto: I’ve faced all sorts of things, from being hung upside down to climbing Mount Etna to a considerable height during sub-zero temperatures. Let’s just say I didn’t get bored and every day was a new adventure.

What challenges did you face playing Anna?
Dragotto: I had to overcome many of my fears, including of heights when I had to throw myself into the void on several occasions.

Having not gone to drama school, what lessons did you learn about acting that you will follow during your career?
Dragotto:  I was given teachings and advice that I’ve treasured and will continue to treasure. For example, with Lorenza Indovina, I worked hard on finding the cleanest part of myself so as to come across as true to life as possible.

Niccolò, how did the coronavirus pandemic affect production?
Ammaniti: Covid appeared when we were six months into filming and it forced us to stop. It was something difficult to deal with, especially for the young actors. During lockdown, apart from the fear of not being able to resume filming, which we fortunately overcame, we had time for editing and figuring out how to transform the series to reduce it from eight to six episodes.

Covid aside, what other challenges did you face in production?
Ammaniti: Quite a few. In particular, the number of different environments, the mammoth task faced by the set designers and the costume department to transform the actors into little savages and the presence of hundreds of children who required exceptional attention.

What do you hope viewers take away from the series?
Ammaniti: I hope they understand the value of hope and determination to change the fate of the world around us. And that if we don’t remember our past, we cannot imagine our future.

How do you think the series speaks to the current pandemic, if at all?
Ammaniti: I think that, like books and films, it connects us with the world and makes us feel less alone.