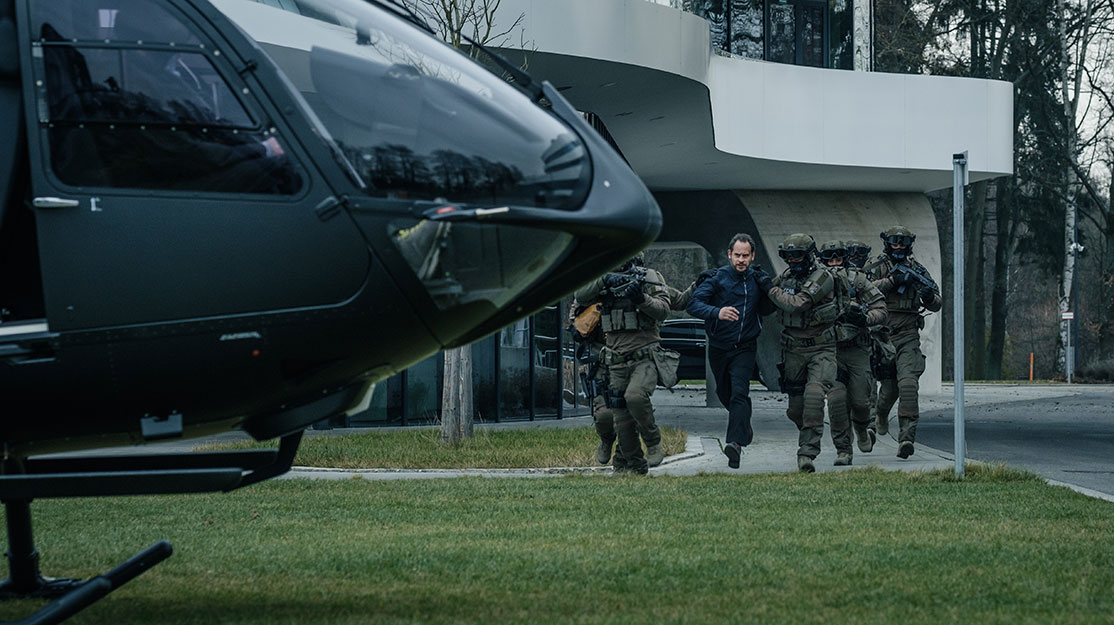 German drama Blackout: Tomorrow Is Too Late imagines what happens when a sudden blackout throws Europe into crisis. DQ hears from star Marie Leuenberger and the creative team behind the show.

Based on the novel by Marc Elsberg, German-language drama Blackout: Tomorrow is Too Late is a complex, multi-layered thriller that imagines a world where Europe is plunged into darkness.

On a cold November night, a fatal chain reaction in the power grid turns the lights out across the continent, and everything that uses electricity grinds to a halt. While the authorities fight to control the impact of the blackout, one man in Italy, former hacker Pierre Manzano (Moritz Bleibtreu), realises a malicious code he wrote nearly 20 years ago during the 2001 G8 riots is to blame.

Meanwhile, in Germany, Frauke Michelsen (Marie Leuenberger) suddenly finds herself heading the country’s crisis response team, battling with failed communication systems, the threat of food shortages and the collapse of the health system. But when her two young twin daughters go missing, she is torn between managing the spiralling incidents and her own personal challenges.

Distributed around the world by Red Arrow Studios International, the series is produced by W&B Television (Dark) for streamer Joyn, where it debuted earlier this month, and German broadcaster Sat1.

Von Naso wrote the scripts with Kai-Uwe Hasenheit, based on Elsberg’s novel, and was struck by how the story was rooted in factual evidence.
Von Naso: It was very interesting because it shows us how dependent we are on electricity. Really nothing works without it. Every part of our life doesn’t work without electricity, and that leads to questions.

But adapting the source material was “really complicated.”
Von Naso: Because of the blackout, you have a schedule. After three days, there are problems with food. After five days, people start fires because it’s cold. Some scenes can only be at night when it’s dark and other scenes have to be in the daytime. It was really difficult to find a structure for this because you had different parts and they all had to come together.

Rihs was drawn to the project by the way the book explores not just the impact of a blackout on people’s lives but also the motives of those responsible.
Rihs: We don’t have classic bad guys in the story. Our bad guys are activists who found it necessary to resort to radical means because they are convinced people are only prepared to change something if it hurts them enough. If you look at the world today, this attitude is not totally absurd. It’s not easy for the viewer to be absolutely for or against someone in this story, and this not only makes our thriller more exciting, it makes it more human in the end. All our heroes are also anti-heroes at the same time. We really worked on deeper meanings and not only the thrills.

In adapting the novel, the writers faced a task of combining the technical, fact-based details of the story with the emotional arcs with its protagonists.
Von Naso: My co-writer and I knew we needed an emotional approach to our characters, so we changed some things. What was great was that when Marc first read the script, he said, “You’ve changed a lot, but if I had had the idea of the back story with Manzano and a more emotional approach, it would have been in the novel.”

With Pierre Manzano, the series finds its protagonist in a former ideologist and hacker who realises he could be responsible for the blackout.
Von Naso: That leads us to the question, what did he do 20 years ago? What is interesting is he fights against something he maybe tried to do years ago. It’s a little bit like he has two sides. He’s a really interesting character.

The show’s other main character, Frauke Michelsen, finds herself juggling personal and professional crises when she is called to lead the German government’s response against the blackout, all while searching for her missing children.
Leuenberger: Frauke works for the crisis unit and she has two girls. In the beginning of the series, she is at a train station to pick them up, but the train is stuck because of the blackout. All the passengers have been evacuated but they can’t find the girls. She goes back to the Home Office because Berlin is dark, and then she is spontaneously promoted to head of the crisis unit because her boss can’t come back to Berlin. While she is coordinating the effort to save Germany, she is desperately searching for her children.
It was really hard to play her because, in one story, she has to be a professional politician, make decisions between life and death, coordinate aid and fight in a man’s world full of intrigue and power games; while on the other side, she is a mother and can’t find her children. She doesn’t know if they are still alive or dead, or if they have been kidnapped. Both stories are really a nightmare.

The directors were keen to find a unique visual style for the series that retained the story’s grounding in real life and didn’t follow the path of other post-apocalyptic science-fiction films and series.
Rihs: Our world still looks the same as it is, except for important little details when the electricity is cut off. It’s often dark and strangely quiet. There’s no traffic, there is smoke and fire everywhere and nature is returning to our world. You can smell the series from the style we made. We brought something very special you’re not so used to seeing. It’s disturbing and frightening because we are so close to reality. This is not science fiction.

Von Naso: We really wanted the audience to feel the blackout. At the same time, we wanted to always be very close to the characters and see what is happening through their eyes. You can’t imagine, especially if you live in a city, there being no light, because you always have light. It was quite hard to shoot, especially wide shots, because we had to ask hundreds of families to switch off their lights for two hours. This feeling of darkness, with only a little bit of moonlight, was what we tried to create.

The Covid-19 pandemic created some unexpected challenges on set.
Nommsen: We couldn’t film at a railway station because we weren’t allowed to go there, so we had to find a place that looked like one. We were very happy to go to the trade fairground in Leipzig, which really looks like a railway station. Then we added the trains with VFX. That was one surprise. The main challenge was to switch the lights out everywhere, so we did what we had to do. The lights that we couldn’t switch off, we switched off with VFX.

Lancelot: In the scene at the railway station, the light goes out from one moment to another, so we needed a station with 600 people and for the light to go out. Production-wise, it’s a nightmare. Then you have a rollercoaster that stops 20 metres off the ground. How you can film it? First we wanted to do it in a studio, but then we realised we couldn’t afford it, so we used a real rollercoaster. But then you have to ask the actors if they would like to be upside down, 20 metres up in a real location. There were a lot of scenes that were quite complicated to shoot.

The mixture of darkness and people wearing masks created a strange but collaborative atmosphere on set.
Rihs: For me, it was really quite frightening, this mixture between these two crises [the pandemic and the fictional crisis in the show], but that also made it a big adventure in a way. People came together on set, and it meant something emotionally among the people we shot it with during this very unusual time.
As fast-paced and action-packed the series is, it’s important to say it also has emotional depth and a melancholic mood, as our protagonist suffers the loss of his great love, Frauke suffers from missing her children, and everyone misses the good old world. This mood infiltrates our current world situation too, which makes this thriller an interesting piece.

Von Naso: When we wrote the script, we had some scenes like a curfew in the middle of Europe, and a hospital where you have to decide who lives and who dies. Everyone said it would be impossible for something like this to happen in Europe, and half a year later we had Covid and all these situations [for real]. It’s interesting because it’s really different from the Covid crisis but it had some things in common.

Blackout’s creators are confident the show’s powerful story and the success of the original novel mean it will appeal to audiences around the world.
Von Naso: It’s a very interesting mixture. It’s very intense, there’s a lot of suspense. You have these big drama moments. You have interesting characters, an amazing cast from Germany, Switzerland and the Netherlands and a very interesting topic. That’s all you need for a great show.