Light at the end of The Tunnel?

Season two of Sky Atlantic’s The Tunnel finished on May 31, and although the official ratings aren’t yet in for the last couple of episodes, the show hasn’t done as well as its first season in late 2013.

This reduced audience doesn’t necessarily mean the second season (Sabotage) is inferior to the first. There are several possible explanations for why it hasn’t achieved the same high standards.

One was the unfortunate timing of the show’s launch. Due to premiere around the time of the Belgium terrorist attacks, it was delayed by a week out of respect for the victims. This may have been enough to knock the edge off the show’s appeal.

Another is that the Scandinavian show on which The Tunnel is based, The Bridge, has become a big international hit in its own right. With BBC4 in the UK attracting an audience in excess of one million for the first three seasons of The Bridge, it’s possible that audiences have decided to bypass The Tunnel in deference to the original.

There’s also the time lag between the two seasons. Echoing the situation with The Returned in France, it’s possible that the lengthy gap between them has sapped the franchise of some of its momentum. By a similar token, people who missed season one may (rightly or wrongly) have shunned season two for fear of walking into a franchise in the middle of its story.

Then there’s the fact that Sky Atlantic ‘did a Netflix,’ releasing all eight episodes of the latest season in one go as a box set. To get a true reflection of the show’s performance, we really need to see how it did when those numbers are also factored in.

And finally there is the ongoing process of media fragmentation. Two or three years on from the launch of season one, there are new scripted channels and new platforms pulling audience away from Sky Atlantic.

Overall, however, the Ben Richards-scripted show has probably done enough to justify a third season – particularly as the cost of production is shared with Canal+ in France and it can be aired across Sky’s services in Italy, Germany, Austria and Ireland.

While it can’t compete in ratings terms with Sky Atlantic shows such as Game of Thrones and Fortitude, it outperformed The Last Panthers and is comfortably ahead of most of the US acquisitions that have featured on the channel (Vinyl, Veep, Billions).

As we’ve observed before, there is so much scripted content on the international market these days that it’s incredibly hard for shows to make their mark – unless they are placed in BBC1 primetime or the AMC slot just after The Walking Dead. However, one show that has managed to make some noise this week is Entertainment One (eOne) TV’s polyamorous comedy You Me Her.

Created and written by showrunner John Scott Shepherd, the show is about a couple who hire a female sex worker to introduce a spark into their sex lives. All three then fall in love.

There’s very little public indication of how the first series did when it aired on DirecTV’s Audience Network in March, but the channel is obviously happy, having just greenlit two new seasons. “Our viewers have opened their hearts and minds to embrace the unique relationship between Jack, Emma and Izzy,” said Chris Long, senior VP of original content and production at AT&T (the company behind DirecTV). “Audiences strive for compelling storylines and intriguing characters, and we believe in the potential for this show to grow even more as we continue our journey with eOne.”

You Me Her is the second collaboration between DirecTV and eOne. The two companies previously partnered on Rogue, a police drama starring Thandie Newton.

Commenting on the alliance, John Morayniss, CEO of eOne Television, added: “You Me Her is a bold, provocative show that grabs your attention immediately. We’re delighted AT&T has signed on for another two seasons, which speaks to the strength of these dynamic characters and storytelling. We’re looking forward to seeing how this complicated, polyamorous relationship that John Scott Shepherd has brilliantly created will continue to unfold.”

One story that has attracted a lot of attention this week is Netflix’s decision to release some insight into how its viewers consume drama series. Although the SVoD platform didn’t actually go as far as releasing any numbers, it did provide some insights into the speed at which people binge shows.

In a nutshell, the Netflix research looked at the way audiences watch 100 shows across 190 countries (though keep in mind that some of these countries will have small subscriber bases, so what we’re primarily seeing is user behaviour in major subscriber territories like the US, Canada, UK and Scandinavia). 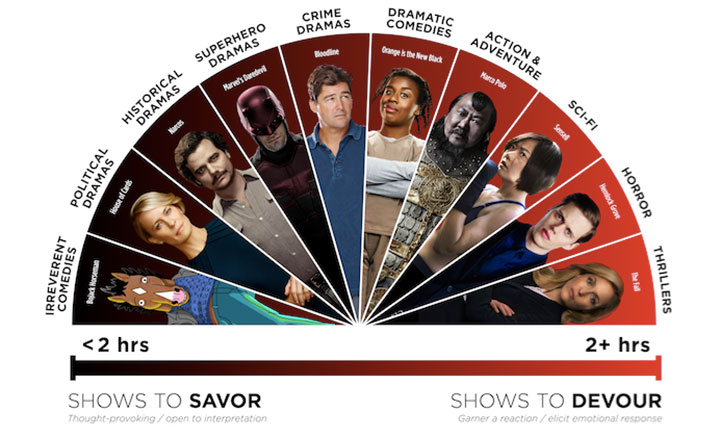 Netflix then created a binge scale (see above), identifying the shows that get devoured most quickly. Its conclusion? “Series like Sense8, Orphan Black and The 100 grab you, assault your senses and make it hard to pull away. The classic elements of horror and thrillers go straight for the gut, pushing the placement of series like The Walking Dead, American Horror Story and The Fall towards the devour end of the scale. Likewise, comedies with a dramatic bent, like Orange is the New Black, Nurse Jackie and Grace and Frankie seem to tickle our fancy and make it easy to say ‘just one more.’”

By contrast, Netflix added: “It’s no surprise that complex narratives, like House of Cards and Bloodline, are indulged at an unhurried pace. Nor that viewers take care to appreciate the details of dramas set in bygone eras, like Peaky Blinders and Mad Men. Maybe less obvious are comedies like BoJack Horseman, Love and Unbreakable Kimmy Schmidt. But the societal commentary that powers their densely layered comedy paired with characters as flawed as they are entertaining allows them to be savoured.”

You might be tempted to suggest that shows at the slower end of the scale are not being savoured and are instead struggling to hold viewer attention. However, with strong titles like House of Cards, Narcos and Daredevil in that position, it seems unlikely.

Possibly a point that doesn’t come out of the analysis is different binging speeds according to age. A teenager or young, single adult probably has more time (and inclination) to watch episodes back to back than an older adult (at least up to the age of 60). So that might skew Netflix’s binge-ometer.

More granular insights are probably required to make use of Netflix’s data. But there may be a lesson for more traditional channels about the way they deliver their content to audiences. If channels want to make a big impact quickly, then perhaps they need to buy or commission shows that lend themselves to super-fast binging. But if they want to encourage audiences to come back to them week after week, then there may be a role for shows where audiences are happy to wait for the next episode.

In terms of shows destined to be big international hits, FX Productions and Marvel Television’s X-Men spin-off series Legion looks well-positioned to make its mark. An eight-part series from Noah Hawley (Fargo), the show will debut on FX in early 2017 after being produced in Vancouver this summer.

As the result of a new deal signed this week, it will also have a day-and-date premiere on Fox channels in 125 countries.

Legion follows David Haller who, diagnosed as schizophrenic, has been in and out of psychiatric hospitals for years. But after a strange encounter with a fellow patient, he is confronted with the possibility that the voices he hears and the visions he sees might just be real.

Finally, there may be a reprieve for country-and-western scripted series Nashville, cancelled after four seasons by ABC. Producer Lionsgate has been looking for a new home for the show and there are reports that CMT may be willing to pick up the tab.