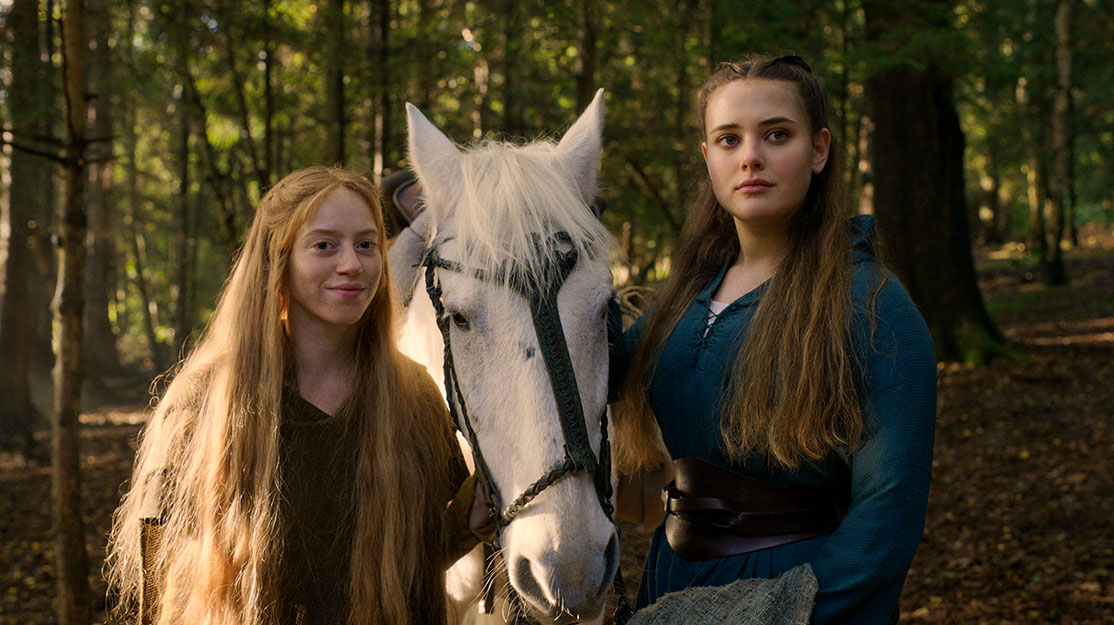 For as long as there have been stories of King Arthur and the Knights of the Round Table, television and film have been intrigued by this medieval figure, the wizard Merlin, and Excalibur, the legendary sword in the stone.

Series such as Camelot, Merlin and Once Upon a Time have dramatised the mythology for the small screen, while film versions include King Arthur, First Knight, Monty Python & The Holy Grail and Disney’s The Sword in the Stone.

Now, a new entry seeks to upend this story by reimagining Arthurian legend from the perspective of Nimue, a young woman with a mysterious gift who is destined to become the powerful Lady of the Lake.

Based on the book by Tom Wheeler and Frank Miller, Netflix’s 10-part historical fantasy drama Cursed follows Nimue (Katherine Langford) who, after her mother’s death, partners with a mercenary called Arthur (Devon Terrell) on a quest to find Merlin (Gustaf Skarsgård) and deliver an ancient sword. Over the course of the season, which blends road movie with a coming-of-age story, Nimue will become a symbol of courage and rebellion against the terrifying Red Paladins and their complicit King Uther (Sebastian Armesto).

Among those tasked with bringing to life the world and the characters of Cursed, which launches on Netflix today, were production designer Catrin Meredydd and Erika Ökvist, who was in charge of make-up, wigs and prosthetics.

After reading the series overview and the script for episode one, Meredydd pitched her vision for the series to showrunner Wheeler and lead director Zetna Fuentes. “You put a look book together of how you imagine the series will look in terms of tone and then it’s really a case of chemistry,” she tells DQ.

“Zetna and I had so many of the same references, it was just a dream. It was quite a fast turnaround for such a big series. We had a lot to do in prep, and we built a huge number of sets. We built medieval towns, throne rooms and taverns. It was really exciting from the very beginning.”

Meredydd’s credits include Poldark, Broadchurch and The Fades, as well as Spirit Warrior, a fantasy series set in ancient China. Cursed introduced her to a new genre that is rooted in history but has fantastical elements, allowing her to push the boundaries of this medieval world and exaggerate or drop certain parts to emphasise the more mysterious parts of the setting.

In practice, this meant many of the settings for the series were built, while the more fantastical landscapes used VFX. “With Zetna, it was very important for her to have as much as possible in camera,” Meredydd says. “We built a 360-degree medieval town and a harbour, and various other towns that doubled as a few different places with back alleys.

“There were some sets that were completely fantastical, like those of the Leper King and the sunken temple, but it was important the physical set was as fantastical as it could be so the actors felt like they were in these places for real. They then chose the sets that were going to be expanded in VFX so you have the bigger world. But as soon as the actors are in there, you’re on a physical set they can interact with.”

With the show revolving around Nimue and Arthur’s epic journey, Meredydd had to design numerous sets for the series, some of which would only be used fleetingly. She says it was important to have new sets that created a “wow factor” appear in every episode, though budgetary restrictions necessitated some creative thinking about how sets could be repurposed.

“One of the key places is where Nimue starts her journey in Hawksbridge and then she moves on from there so it was a big turnaround [on the set],” she explains. “We had to build additional things and change it around so it didn’t feel like a harbour set anymore; it was more inland. It was all to do with the dressing and construction. A lot of sets were morphed into other sets throughout so we could use our resources effectively.”

Filming took place on location in Snowdonia, North Wales, as well as in England in the “beautiful, very magical forest” of Puzzlewood, Gloucestershire, and on the beaches of Cornwall. These locations were then tied back to the standing sets built at Langley Studios, near Pinewood.

“We had two big stages and we had the throne rooms, the taverns, various smaller sets and side alleyways,” Meredydd says of the studios. “That’s where we built the sunken temple where Nimue first discovers her mission. The sets were so varied; we had so many departments working with us to bring them to life – amazing set decorators, construction, the painters, plasterers, a drapes department. It was a very big operation to bring these sets to life but everyone had such a great time.”

To make the sets as authentic as possible, Meredydd researched Celtic traditions that could be used in the design, as well as examples of medieval graffiti. “In the background there was always something interesting that really made you feel like you’re in that world,” she says. “Everything was also different for the various groups in the series. You wanted to feel like if you got on a horse and held a sword, you knew it was from a certain group, so everything was customised and researched to the last.”

Meredydd says communication between the numerous department heads is key to building a cohesive world for a series, which might sometimes have four directors working together. She was also able to use Miller’s illustrations as a starting point for her own designs.

“Communication is the biggest thing on these bigger productions, so every single set we did, even down to the smallest detail, we would make a look book and make sure everyone was happy so there were no surprises on set,” she notes. “Every set was built in 3D and textured, so everybody knew where we were going and we could share that with all the other departments so we were all on the same page.

“Frank loved going to see all the armour and was quite involved in the development of Excalibur. There were things written in the script that had to be changed slightly due to timing or schedule, or due to the sets not being morphed into other sets. We would also feed back into the writers room with things we found on location and things we discovered. It was a very collaborative experience.”

Make-up, wigs and prosthetics designer Ökvist says working on Cursed was the most fun she’s had in her career, describing the project as “a work of love.” She also leaned on Miller’s visuals to create the look of the characters, pairing those illustrations with elements of nature to keep the world “absolutely believable.”

Owing to the huge cast – with 240 people in the main cast alone, plus supporting artists – Ökvist couldn’t oversee every actor every day. So during her two-month prep time, she would carry out fittings with the make-up artist who would do it on the day of shooting so everyone knew how it should look.

“Even though you have lots of different characters, I wanted to see the human face underneath so you get as much variety as you have in real life, rather than creating creatures,” she explains.

“That was what we wanted and what we did. On the day [of filming], I would see all the actors. But as soon as they were shooting, I would then hang out with the crowd because we could have hundreds of extras. When you’re doing something fantasy like this, it’s really difficult to explain what it is you need [to make-up artists coming in for specific days]. If it’s the 1960s, you could say a character is upper middle class, her hair needs to fit the hat and the make-up needs to work with the costumes. But when you have got characters who have not been seen before, how do you explain that? I really needed to spend a lot of time with the crowd on set and then in my prosthetic workshop.”

Every mould would be hand-sculpted before the prosthetics were cast and painted, with hair being added where needed. Ökvist admits it was a “very long process,” with lots of replacement parts having to be on hand in case of damage, wet weather or if characters were required on set multiple days in a row.

“But I had the most incredible team at my hands helping me,” she says. “Everybody was so respectful to the look of what we were doing. Even the day players respected all the make-up I was doing. Normally, something might be falling out and they might not care, but they would come up to me and say if something was coming off. Every day working on it, everyone really loved it, respected it and saw it for the magical story it is.”

The Swedish designer, who has previously worked on Taboo, The State and The Rook, echoes Meredydd when she says collaboration was a key theme behind the scenes. “We really merged very seamlessly, where it was practical, if I did something in costume and the costume team did something in make-up,” she says. “By the time we started filming, we knew the world and how it should feel. It is a new take on a world we might already know, just looking at it from a different angle both in terms of the story and visually.”

Ökvist sees her role and those of the other departments as key components of the storytelling process, which all combine to create the world of Cursed. “What you try to do with every job is find a visual that can be the road map for this story. That’s what I feel my job is,” she adds.

“The question is ‘what is the best look for the story?’ not ‘what is my style?’ If your design isn’t helping the drama, it’s not a good design. Filmmaking is a clock, and even the smallest spring can stop that clock from working. The character comes from the writer, the casting director, the actor, me, costumes, hand props and then, in the end, the editor. There are so many levels before you get this character delivered to the audience, and that’s why you get believable characters.”