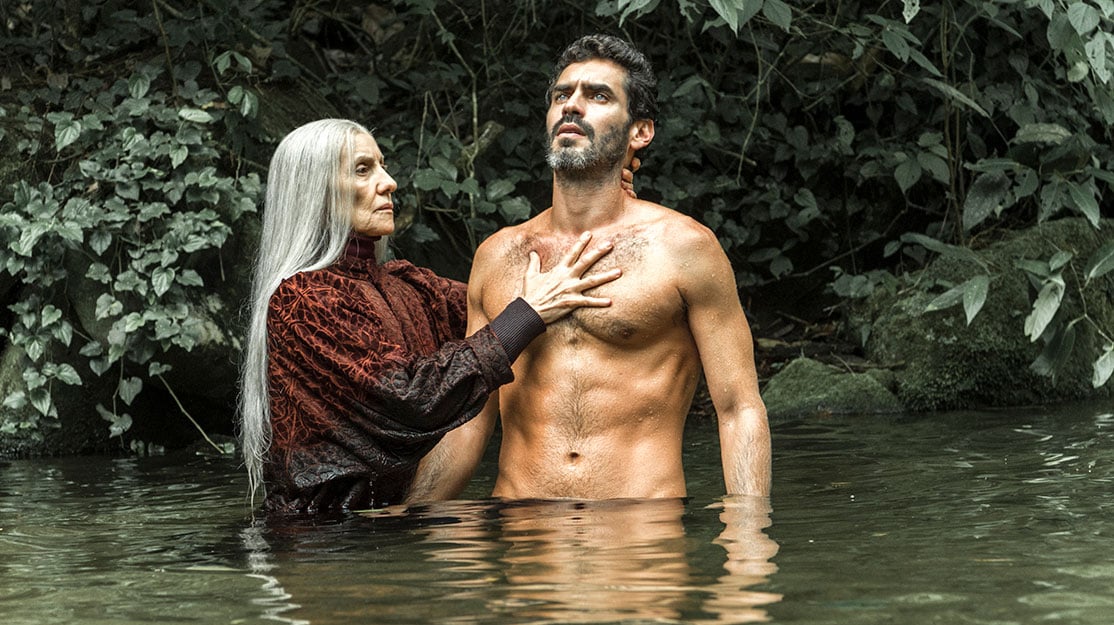 After her husband’s suicide, a woman and her daughters move to Brígida, a small town that is about to celebrate the pagan festivities of Ivana Kupala, which had been banned for the previous 30 years. What follows are a series of terrifying events and dangerous rituals that unsettle the community and bring to light the secrets of a crime that ties three families together.

The first TV series from Ana Paula Maia, the Brazilian drama is set across two time periods and combines themes of crime, mystery and the supernatural to create a complex puzzle that aims to keep viewers guessing right until the end.

Produced by Globo Studios for streamer Globoplay, the series is being screened this week at the Berlinale Series Market as part of the 70th Berlin International Film Festival. Artistic director Carlos Manga Jr is behind the camera alongside directors João Paulo Jabur and Pablo Müller.

Here, creator and writer Maia talks about the origins of the project, creating the fictitious world of Brígida and her approach to screenwriting.

Tell us about the story behind Unsoul.
Unsoul is a supernatural drama that happens in the fictitious town of Brígida, located in the south of Brazil and colonised by Ukrainians. The story is narrated in parallel in two different timelines, with a difference of 30 years between them. It shows the consequences of choices made in the past.
What sets the starting point of the whole story is the murder of young witch Halyna (Anna Melo) in the 1980s, during the traditional pagan party Ivana Kupala. Her death leads to a ban of the celebration for 30 years. When the population finally decides to resume the celebrations, supernatural events start scaring the residents of Brígida, especially the families involved in this tragedy from the past.

How was the series created?
I contacted Globo about another project, but my story in the audiovisual market really started with Unsoul. The theme has a lot to do with my universe. I’ve liked horror and supernatural stores since I was little, and I have had a relationship with stories in this genre my whole life.
I had never been able to take this to literature but I saw this opportunity in the audiovisual field. I wrote it by myself, pretty much the same way I write my books. The series was born with this name and with this story. Unsoul has a very complex story and Globo really trusted in me. The whole process took about a year.

What was the inspiration behind the series?
I really like the supernatural. My favourite series is The Twilight Zone, from 1959 – I am a big fan of Richard Matheson and Rod Serling, its creators. Another very important series for me is The X-Files. In movies, it’s Hitchcock. I think I have managed to watch everything he made throughout his life. I would say these three are the biggest inspirations for me when I build my stories.

Tell us about the show’s main characters.
Unsoul does not have a protagonist, but a group of main characters. They are basically the mothers of the families directly involved in the tragedy and the mysteries – the witch Haia (Cassia Kiss) plus Ignes (Claudia Abreu) and Giovana (Maria Ribeiro). The women have major roles in Unsoul, which is different to my literature, which is about men. It’s the first time I have written about women and the story has a strong relationship with motherhood.

How was the fictitious town of Brígida created for the series?
I went to a few days of shooting, and the locations in the mountainous region in the south of Brazil were incredible. The atmosphere and the environment in a series like Unsoul are very important. Brígida is a character in the story, because it’s where everything happens. The huge forest that surrounds the town also has significance. It is the meeting point for young adults in the two decades of the story and where the Ivana Kupala party happens.

What kind of research did you carry out? Is there anything related to mythology, or is it based on real life?
It is all based on Slavic mythology, which I really like. I have lived in Curitiba, in the south of Brazil, for almost five years and that is where I started identifying the habits and traditions of other groups of people. My first impact was with food, until I started noticing the woods, the city parks, the typical parties and the folklore groups. I found this very impressive and I thought the rest of Brazil needed to know what happens there.
I deepened my research on the culture of Prudentópolis, a city in the countryside of the state of Paraná, from where I drew the inspiration to create Unsoul. The biggest Ukrainian community outside Ukraine in South America is in Brazil. They keep the parties and traditions alive, and basically nobody knows anything about it. Besides, Eastern Europe is extremely mystical. I took this culturally rich atmosphere to a story with supernatural elements. The idea was to introduce a different culture, which is beautiful and practically erased and that is also part of Brazil.

How did you work with Carlos Manga Jr to bring your story to life?
Since I write by myself and have this creative independence, I get really excited when my work goes to the hands of other professionals. Carlos Manga Jr is a director with a talent for denser, darker stories, and working in this genre with him is such a joy. We have similar taste and influences. When the director and the author coexist in the same universe, it helps a lot. I have been impressed with the whole process – seeing the text come to life and materialise itself is something I’ve never seen before. Being able to see the project become something great, with many actors, is amazing.
It was also great to be able to see the actors bringing life to the characters I created. Unsoul is my first audiovisual project. We started shooting with a fully written script. Of course, there might be some adjustments, but the script was already written when we shot.

How were you involved in production and post-production?
I watched some days of shooting and also took part in much of the editing. I could see the series coming to life up close, give my opinion and share my wishes with the director. It was a very pleasant process.

What was your biggest challenge: development or production?
All stages are challenging. In Unsoul specifically, there was the challenge of creating a supernatural drama that worked in Brazil and that showed an unknown aspect of the country – the Ukrainian community.
The other challenge was searching for a cast that the audience did not know. Most of the cast in the series is made up of actors selected in five different states of the country. Another challenge was the location: we needed specific places, and this is why the series was shot in different states. It’s a big project.

What do you think will attract the Brazilian audience as well as viewers around the world?
I believe the power of the series will reach the audience in a deep and touching manner. [Whether you’re from] Brazil or around the world, the series tells an engaging story that is full of mysteries and twists, not to mention everyone will get to know the beauty and mystical side of Ukrainian culture.

What’s next? Are you planning season two, or another series?
The whole Unsoul team and I are still feeling the adrenaline of the launch and we are looking forward to seeing the audience’s reaction. Now it’s the time to enjoy this moment and the opportunities that may appear.