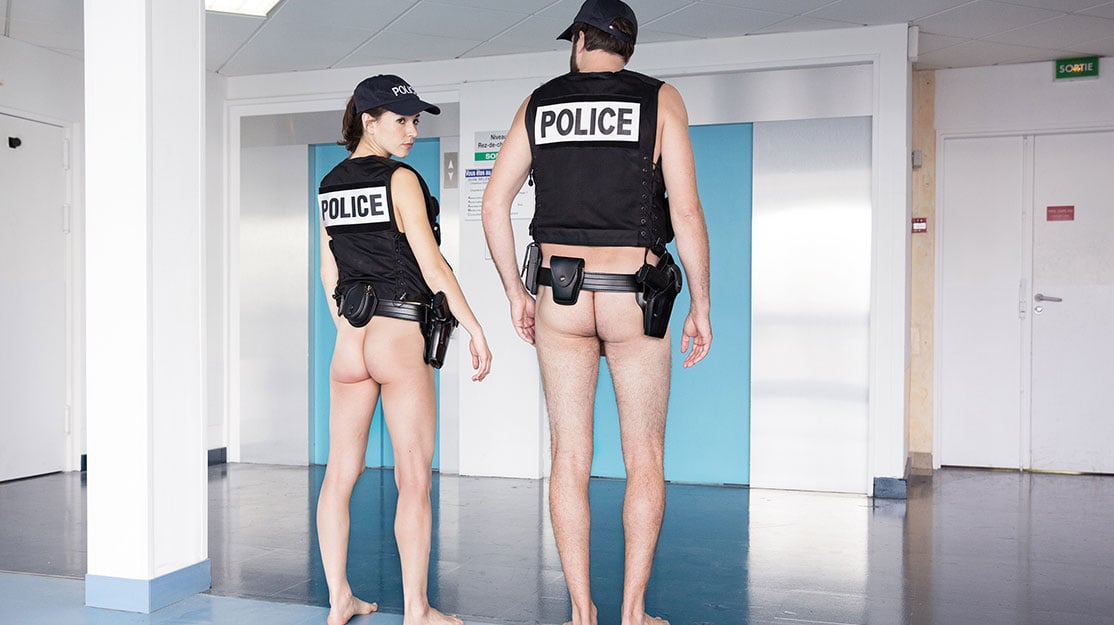 Characters lose their privacy – and their clothes – in French drama Nu (Nude), set in a near-future France where a new law dictates that everyone must be naked. DQ chats to the cast and creative team behind the series about its unusual setting and the real-world issues at its heart.

Science-fiction series have dealt with a gamut of themes and visions of the future, from space travel and life-changing technologies to dystopian societies and alternative histories. But it’s hard to recall a show that posits a world in which everyone has been forced to discard their clothes and go about their lives stark naked.

That’s the very idea put forward in Nu (Nude), a 10×30′ French drama commissioned by OTT platform OCS. Set in 2026, it takes place in a world where a radical change in the law sees everyone living naked in a pacified and peaceful France.

So far so unlikely, yet the show’s premise was inspired by reality. Series creator Olivier Fox, a Parisian, lives close to where several people were shot during the November 2015 terrorist attack on the French capital – and on seeing the aftermath, when swathes of police and military officials decamped to the streets, he looked for a way to remove the threat of similar attacks in the future.

“Then I had the strange idea that everyone is naked, as a way to improve security and have less violence on the streets,” Fox tells DQ. “It was a way to take all the fear and anger away – this is the French response to violence. The US response was The Purge [a film franchise in which all crimes, including murder, are legal for one night a year].”

In this particular future, however, the UK remains fully clothed as a result of Brexit.

Of course, the fact everybody is naked is a metaphor for the issues at the heart of the series. How much do we need to know about everybody? How far would society go to protect itself from harm?

Fox shared his idea with Arnaud Figaret, a producer at Capa Drama (Versailles, Braquo), who backed the show. “I love it,” Figaret says of Nu’s concept. “We are always looking for writers who are thinking outside the box. This is really out of the box and that’s why it was exciting to do. But we wouldn’t have done it if it was just naked people; it was more interesting because it had meaning about dictatorship in French society. It had to make sense, otherwise it’s just showing people naked and we wouldn’t have lasted two episodes.”

Fox wrote the first draft of Nu in March 2016, with shooting beginning the following September in the town of Montévrain on the outskirts of Paris. The production schedule was completed in just 24 days, with up to 12 minutes of on-screen material recorded each day.

Featuring full nudity in every episode, it was always going to be a challenge to find a platform willing to broadcast the series, with traditional broadcasters such as TF1 and France Télévisions unlikely to greenlight such a programme. Thankfully, however, OCS opted to snap it up. The deal with the streamer gave the creative team total freedom to make the show they wanted, though it came with a modest budget of €100,000 per episode, which informed the tight filming schedule.

“If it was airing on a channel like TF1 or the BBC in primetime, the nudity would probably be a problem but OCS is an OTT platform that has subscribers who are watching Game of Thrones and stuff like that,” explains Figaret. “There’s no sex, just nudity. We didn’t want any because we didn’t want any confusion – it’s a regular show but they’re naked. There’s nothing that should make people feel uncomfortable. But if you don’t want to, you don’t have to watch it. It’s not something that comes to you. You have to look for the show.”

If finding a broadcaster represented the first hurdle, the second must surely have been amassing a cast willing to bare all on camera. But while Fox admits he thought the prospect would be “impossible,” he adds: “We sent all the scripts to the agents and had a very good response from them. All the actors knew they would be naked. We had some well-known actors wanting to do it too, which was very surprising for us.”

Figaret picks up: “The quality of the writing meant people understood this show was not just about being naked. We thought it would be very difficult but we had actors who have been on stage and acted naked and didn’t mind doing it as long as it had some meaning. It was very strange but easy to cast. Everybody was just excited about doing something different.”

Taking up the lead roles are Satya Dusaugey and Malya Roman, who play police officers investigating the mystery at the centre of the story. In this new, nude world, tensions begin to rise with the discovery of a man found murdered – and fully clothed.

Sent to investigate is Roman’s Lucie, a young inspector who teams up with her ex-partner, Frank Fish (Dusaugey), who has just woken up from an eight-year coma that began when everyone was still wearing clothes. A Fish out of water, you might say.

Nu is Roman’s first television role, something she describes as “very scary but a great experience.” She admits she found the idea of the show “a bit crazy” but loved Fox’s scripts. “I thought it was an unusual way to show naked bodies on TV and not in a sexual way,” she says.

In the series, sold internationally by Newen Distribution, Lucie is a supporter of France’s new ‘transparency’ laws – an attitude that puts her at odds with Frank, who is struggling to adjust to his new world.

“At first she really thinks it will help society and make a better world,” Roman says. “But as the story goes, she realises it’s not that easy or true or real. So she realises that it’s not as good as she thought. There are many questions in this. How far are you willing to go for the truth and transparency? Myself, I think a world where everybody is naked would be awful. I like my privacy.”

In contrast to Lucie, Frank was a man who, until his accident, enjoyed power and loved nobody but himself, Dusaugey says. “Then he’s completely lost in this new world. He wants to go back to his life before. He doesn’t want to adapt to this new society.

“Lucie is the opposite of him. She’s very authentic and honest. She wants to know the truth and thinks this new society is the truth. These two characters are going to change but in two different directions.”

Dusaugey says the first moments on set were “difficult, but after 10 minutes you forget it,” adding that after three weeks, it was “boring” to see naked bodies. “What I learned on this show was it’s not sexual. The body is not very exciting for me. I like that there’s clothing in the world. You have something to take off when you are with your girlfriend. It’s not very nice to see every day. After several days, to be naked was like wearing a costume.”

Roman agrees the first scene on camera was awkward, but adds: “Everybody was so kind and respectful so everybody was like, ‘OK, I’m going naked.’ It was easy to forget my own body but difficult to act natural in front of my naked partners. It was crazy but fun.”

Looking back, Roman says there is one scene that was particularly memorable: “I was in a forest naked and I was very cold. It was raining and that moment will stay in my head for the rest of my life. If there’s one image I’ll keep, it’s me looking at myself naked in the middle of the woods.”

Fox is under no illusions that Nu, which launches this Thursday, will stand apart from anything else on television. “It’s so different from anything else we have seen,” he concludes. “You see all the operations during the investigation but they’re naked. But what we tried to do was make a real show with real story and real characters. It’s something you have never seen before.”