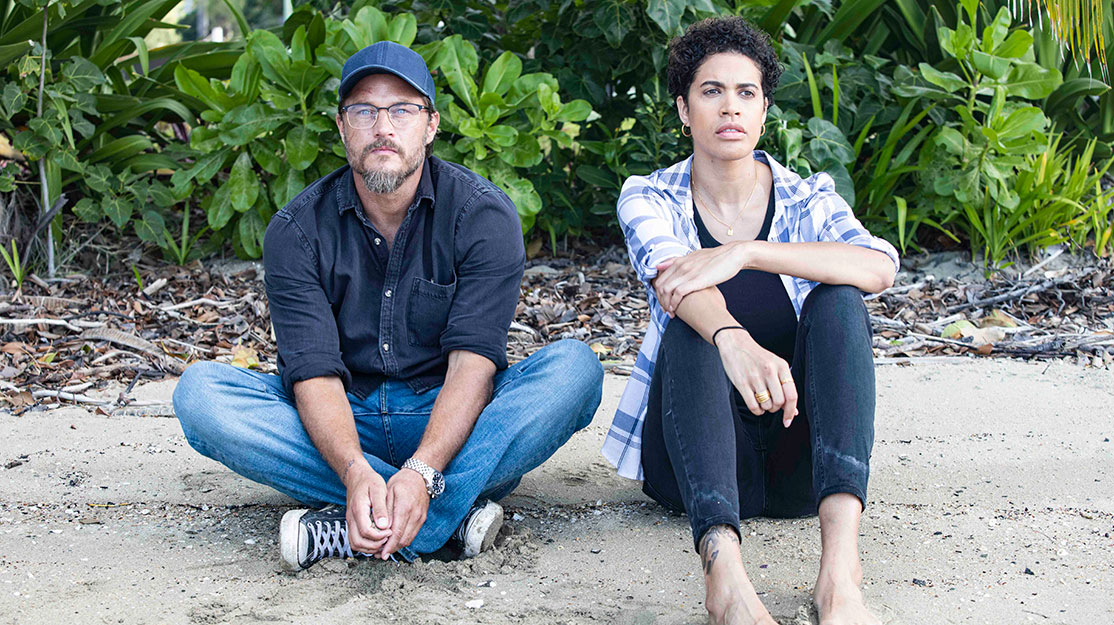 When he set out on the path to making six-part drama Black Snow, writer Lucas Taylor first and foremost wanted to create an entertaining detective drama that would leave audiences wondering ‘whodunnit?’ right to the end.

But during the three-year production process, a story emerged that is rooted within a specific Australian community, leading Taylor and producer Goalpost Pictures to collaborate with – and build the cast from – many of the people in that same community.

Set across two timelines and against the backdrop of the distinctive landscapes of north Queensland, the series follows both the events that led to Isabel’s murder and Cormack’s efforts to unmask the person responsible – a task that fractures an entire town.

The show’s unique hook – the opening of a time capsule – was also the catalyst for Taylor to conceive the show’s premise, as he saw one while travelling through a small town in central Queensland.

“I was struck by the idea of what if, among the Spice Girls CDs, hyper-coloured T-shirts and Sony Walkmans, there was a clue that shed new light on a cold case mystery, on an unsolved murder from that town’s past?” he tells DQ. “It felt like a really fresh and compelling way to unpack a cold-case mystery, this little box of secrets being exhumed from the earth and plunging the town back into its darkest hour 25 years ago. That hook just stuck with me, and it all built from there. Cormack and the Baker family were born and we built the story up from that.”

Goalpost – whose credits include New Gold Mountain and Cleverman – had been looking for a detective drama to add to its slate when a development executive brought Taylor in for a meeting.

“At the time, it was very much about the time capsule and the detective drama. But as we dug in and we started to get to know each other and the Australian South Sea Islander family, that [perspective] started to emerge,” says founding partner and producer Rosemary Blight. “That’s very much what Goalpost likes to do – we like to do commercial, audience-reaching stories that have something to say. We don’t want to tell you what to think, but underneath there’s something to discover, and Lucas delivered that.”

Like most TV detectives, Cormack has a troubled past. But in a show where every character carries some sort of burden, he is not alone. Intriguingly, it’s his own trauma that informs Cormack’s thoughtfulness, intelligence and the empathy he shares with the victims of crime, driving him to solve the myriad of cold cases on his desk. When he first learns that a time capsule may be able to shed some light on Isabel’s death, he is quick to arrive in Ashford, where his outsider status makes him friend and foe.

“He has experienced trauma of his own and it gives him a really deep sense of empathy and allows him to connect with the families of victims in a really strong way,” Taylor explains. “He’s seen a similar pain and he knows how important it is for the victim’s families in cold cases to get answers because, with cold cases, there’s years and years of not knowing. He was always conceived as a really strong physical presence, who was imposing and moved through spaces in a commanding way, but with this soft empathy behind him.”

Taylor also had a clear idea of who he wanted to play Cormack, with Fimmel in his thoughts from the very beginning. He was understandably delighted when the actor then signed on to the project.

“I had a character in mind who was a really commanding physical presence, but who had this empathy and this old-soul feeling about him – and Travis, to me, has always had this empathy behind the eyes,” he says. “I was thinking about him as I wrote it, and it was an absolute dream come true when Rose said to me, ‘Travis has read it and he wants to do it.’ I don’t think that happens very often.”

Another key character in the series is Hazel Baker, Isabel’s younger sister played in 1994 by Molly Fatnowna and then in the present by Jemmason Power. Reluctantly returning to Ashford, where her sister’s death still casts a shadow, she is initially reticent when it comes to helping Cormack in his investigation but slowly finds herself pulled further into the mystery of Isabel’s murder.

Hazel marks Power’s first television role – one she didn’t even realise she was auditioning for when she responded to a casting call in her hometown of Bowen, Queensland, calling for South Sea Islanders to appear in the series.

“She’s heavy,” the actor says of her character. “She carries a lot. It speaks to this unearthing of these secrets, and it’s going to be interesting to see how this character grows throughout the series and the impact Cormack has on her because, even in the first episode, we’re talking about Cormack being a force, and I think Hazel matches that in a protective way. She’s a protector [of her family] and she’s unapologetic about that. She’s got a lot on her mind. She carries a heavy burden.”

After beginning to plot out the series, Taylor decided he wanted to set Black Snow in a world he knew – “sugar cane country” – and the fictional Ashford emerged as an amalgamation of all the small towns in Queensland he was very familiar with. But to tell a story in that setting also meant a responsibility to acknowledge the history of the land and the people who live there, including blackbirding, the practice that saw thousands of Pacific Islanders transported to work on plantations in Queensland in the late 1800s.

“That’s where Rose and I said, ‘We can’t tell this story alone,’ so Kaylene Butler joined our team and became the driving force behind the South Sea Island story and the Baker family’s story. We worked hand-in-glove from that moment to tell this story together,” he says.

“I got the call, heard the storyline and thought this was going to give our people a voice and a presence,” says Butler, a producer and director who is a direct descendant of a chief of Tanna Island in Vanuatu, who was blackbirded to work on Queensland’s sugar cane plantations. “I thought, what an amazing storyline to start this conversation and open doors. We’ve been very blessed and been able to sit across the whole of the production, from development and production through to post.”

Butler jokes that Black Snow is a family affair, as many of the South Sea Islander cast are related in some way, not least the fact that Butler is Power’s aunt, while Power is a cousin of Molly Fatnowna, who plays young Hazel. The show also features Talijah Blackman-Corowa as Isabel and Eden Cassady as Kalana, alongside Brooke Satchwell, Alexander England, Erik Thomson, Kim Gyngell, Rob Carlton, Jimi Bani, Daniela Farinacci and Lucy Bell.

“We are descendants, we are the same, we come from the same chief, so we’re very much blessed to be able to tell our story,” she says. “We needed her to make sure we did represent our families and our ancestors. But it’s not a history lesson, it is a drama, and we are very proud to share in this story.”

As a producer, Butler’s role extended to being in the writers room and working with Taylor on different aspects of the script, while she also brought on board cultural consultant Marion Healy to help ensure Black Snow not only told a gripping crime story but also revealed the deeper crimes of Australia’s past and offered an authentic representation of the South Sea Islander community. Fellow writers on the project include Beatrix Christian and Boyd Quakawoot, who is also of South Sea Islander heritage, while the directors are Sian Davies and Matthew Saville.

“It was honestly just a joy to collaborate in those rooms and build those characters together and plot this twisty, turny, tricky crime alongside it,” says Taylor. “It was hard at times to balance that, but there was a lot of generosity and openness in the room. It’s the most collaborative show I’ve ever worked on, and I think the honesty and truth in the story is reflective of the diversity of perspectives in the room.”

One of the early challenges facing the production was deciding where to shoot the series, and the team at Goalpost quickly settled on filming in remote northern Queensland.

“It looks spectacular,” Blight says. “A lot of people were saying, ‘You could shoot it round the Gold Coast, it’s near the studios and would be much better.’ But because we’d spent two years building up these relationships [with the local community] and collaborating on the story together, it had to be shot where the story was coming from so you get these huge vistas of cane.

“It was probably the best thing I’ve ever done as a producer, making that decision, and some people might say the dumbest, because it is a long way away. It is remote, and Covid hits, planes don’t turn up but, at the end of the day, no one knows about that drama. What we see is the drama on the screen and the environment it’s set in. There was a drive to do it and people wanted to be part of it.”

Having launched down under on streamer Stan on New Year’s Day, the series is also heading to the US via Sundance Now after the cast and crew celebrated its world premiere at Content London last year. All3Media International is handling international sales, and Blight believes Black Snow is an entertaining whodunnit that will captivate international audiences.

“You’ve got a great whodunnit with this very charismatic central character in this world you haven’t seen before with new faces, which is really exciting,” she says.

“One of the key things very early on was setting out to make a whodunnit that was really addictive and gripping, but that subverted the genre in one key way, which is that the victim, Isabel Baker, has a really strong voice in the show,” adds Taylor. “Very often in this genre, the victim is just a dead girl on a slab and the catalyst for a cop story. We set out about to give Isabel a voice – she’s actually solving a mystery of her own.”