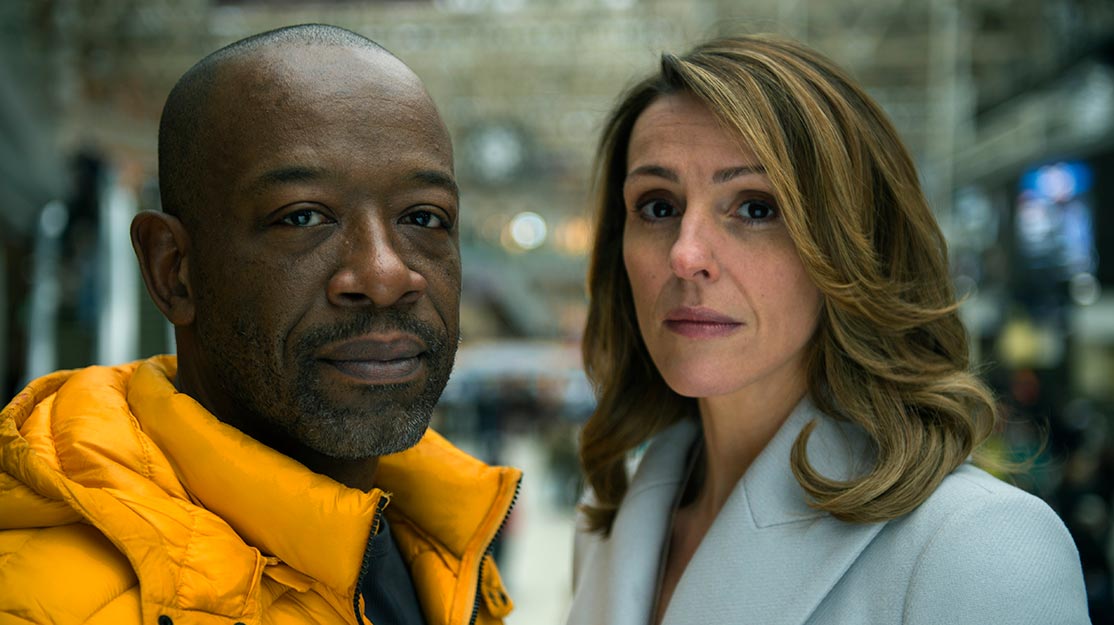 Lennie James wrote and stars in Sky Atlantic drama Save Me, about a father’s hunt for his missing daughter. DQ joins him on the set to hear why one of its stars is also its setting – a pub.

They don’t make boozers like this anymore. The Palm Tree in the heart of an east London estate is a classic, old-fashioned pub. The regulars, for all we know, may well have been sitting on the same bar-stool for several years without moving.

The Palm Tree also features a karaoke booth that has very much seen better days, gravy-coloured wallpaper that appears to predate the invention of beer itself and fairy lights desperately clinging to the walls. These decorations are for life, not just for Christmas. “Gentrification” is not a word in this pub’s vocabulary.

For all that, The Palm Tree makes an excellent precinct for Save Me, an absorbing new drama that starts in the UK on Sky Atlantic on February 28. Outside of the soaps, this is not a setting we have witnessed very often before on mainstream British TV.

In this new six-part series written by and starring Lennie James, this is the court where the drama’s central character, Nelson “Nelly” Rowe (played by James), holds sway. Nelly is in the Palm Tree every night regaling his fellow punters with colourful tales of his previous night’s exploits. It may have been amusing 20 years ago, but now that Nelly is pushing 50, it’s bordering on sad. At his age, this is a man who really should know better.

Living hand-to-mouth from a series of cash-in-hand jobs, Nelly never stays long in one place, moving in with whichever woman is foolish enough to tolerate him that week.

Chatting to DQ between scenes, James makes for magnetic company. It is easy to grasp why the actor, who was raised in Tooting, south London, has proven such a mesmerising presence in everything from Line of Duty to The Walking Dead.

“I wanted to write a thriller in a place I really knew well,” says James, when asked why he chose this unlikely pub as the principle locus of his drama. With a winning grin, he adds: “Basically, I didn’t want to do hours of research.”

Researched or not, the Palm Tree is the ideal arena in which the drama can unfold. Random people flit in and out of it, but whatever else is going on, you can guarantee that Nelly will always be there, centre stage, playing to an adoring audience (including characters played by Stephen Graham, Susan Lynch and Kerry Godliman).

James reflects: “The pub is a very important part of the story because you go there both to drown your sorrows and to celebrate. Both things can happen at the same time and over the same pint.”

Crucially, the Palm Tree and its motley crew of regulars also smack of authenticity. James observes: “In any pub, there’ll always be a Nelly. People like that do exist. All the core characters in Save Me are based on real people. They’re not 100% depictions, but they’re versions of people I’ve come across.”

Lynch, who plays barmaid Stace, confirms that when she served in bars to make ends meet early on in her career, she came across many Nellys. “I worked in nearly every pub on the Finchley Road when I was at drama school. Many were just like the Palm Tree. You always had your regulars. You would start your shift by saying, ‘Really, Tommy, I’m sorry to hear she’s not very well.’ By the end of the shift, you’d be thinking, ‘I can’t engage with Tommy tomorrow or else I’m never going to get my glasses washed and get home.’”

The actor, who was also had leading roles in From Hell, Waking Ned and Enduring Love, continues: “A pub is a very good setting for a drama as all the stories can cross over there. All the stories start to merge in The Palm Tree, and by the end, there is a huge collision.”

Nelly’s bibulous ‘we’ve got tonight, who needs tomorrow?’ approach to life is rudely interrupted one morning when the police burst in and arrest him on suspicion of kidnapping Jody, the 13-year-old daughter he hasn’t seen for 10 years.

After Nelly had a brief, summer fling with Claire (played by Suranne Jones) more than a decade ago, Jody was born. But when she reached the age of three, Claire decided to move away from their London estate to a bling mansion in the suburbs to start afresh with her flashy record producer husband. That was the last time Nelly saw Jody. Determined to prove his innocence, Nelly discovers hidden depths within himself. But will it be enough to save him?

It is the very fact that Nelly is so singularly ill-equipped to take on the task of establishing his own innocence that makes Save Me so compelling.

James, who has also starred in Jericho, Critical, Low Winter Sun and Snatch, muses: “This is a thriller, just set in place where no one sets a thriller. And the hero of the piece is completely unqualified to be a hero.

“But in attempting to prove his innocence, Nelly finds some sort of redemption. This is a story about the cost of redemption and what it does to him, his ex-lover, his friends and his community.”

For all that, Save Me is very far from an irredeemably grim ‘woe is me’ drama. It is replete with vibrancy, vim and vigour. Jones, who drew widespread acclaim as the titular character in Doctor Foster, comments: “People love dark stories because they take you to a place you think you don’t want to go, but really you do.

“Having said that, the reason Save Me is so different is because it’s also so full of the humour and the history of these people. It portrays a community you’ve never seen before. It’s so warm.”

The estate depicted in Save Me undoubtedly overturns our expectations. Jones continues: “This world is sometimes painted as depressing. But this is very different. When you watch Save Me, you want to be there. Even if you haven’t grown up on an estate like this, you want to go to that pub and meet these people.”

Writing and starring in Save Me required a lot of effort from James. But it has all been worth it. Made by World Productions and distributed by Sky Vision, this is a riveting drama about a man desperately attempting to rescue himself from a life of self-medication, muddling-through and mediocrity.

James declares: “I’m proud that I’m the first person to get a thriller set on a south-east London estate made. I don’t know if it will spawn a new genre, though.”

Perhaps the best part of Save Me, though, is that its producers evaded the easy option. They avoided the temptation to turn out another Richard Curtis-lite version of London. This is perhaps a more accurate reflection of the capital city most people know. It is not prettified and full of red post boxes and red telephone booths, but red in tooth and claw.

Save Me shows us a London we will never glimpse in a tourist brochure.‎ Simon Heath, head of drama at World Productions and executive producer on this series, concludes: “This is a world we don’t see on our TV screens outside EastEnders, but that’s a very different genre. To set a drama in south-east London feels fresh and surprising. We’ll see a different side to London in Save Me.

“It’s not the London of Notting Hill and red buses and black cabs.”