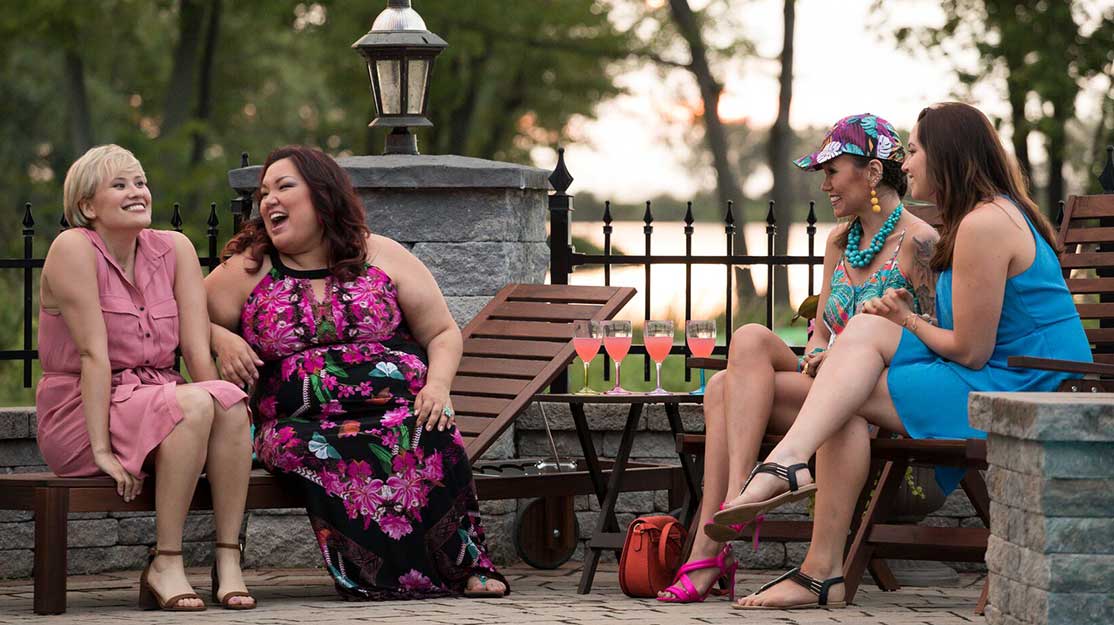 Last of the Mohawk Girls

As Canadian comedy-drama Mohawk Girls returns for its fifth and final season, executive producer Christina Fon and actor Brittany LeBorgne consider the legacy of the series, which follows a group of women living on a Mohawk reserve.

Among the issues currently facing the television industry, there is arguably none more important than the need to increase diversity, both on screen and off. One Canadian series, however, has spent more than five years breaking down stereotypes to tell the story of four Native American women living on a Mohawk reserve in Quebec.

Mohawk Girls takes a comedic look at the lives of Bailey (Jenny Pudavick), Zoe (Brittany LeBorgne), Caitlin (Heather White) and Anna (Maika Harper), who are trying to stay true to their roots while navigating sex, work, love and what it means to be Mohawk in the 21st century.

Produced by Rezolution Pictures and distributed by GRB Entertainment, the dramedy launched on APTN (Aboriginal Peoples Television Network) in 2014 and will return for its fifth and final season on November 14.

“We just finished shooting and it’s our last season so it’s very bittersweet,” executive producer Christina Fon tells DQ over lunch in Cannes. “The broadcaster wanted to end it; they have a limited budget so they have other shows they want to try. We’re OK with it – we had a good run. It’s not terrible; five seasons is pretty good.

“But we’re excited about the premiere of the final season. A lot of people are talking about diversity. We’re in a new era for wanting to see diverse characters. It’s taken a while to take off but we’re starting to feel like broadcasters are asking for that type of content. We’re at the right time for this show.”

Mohawk Girls, created by exec producers Tracey Deer and Cynthia Knight, is based on Deer’s 2005 documentary of the same name. A scripted pilot was produced in 2010 before a full-season greenlight followed. The show has gone on to be nominated in the best television comedy category at the Canadian Screen Awards in successive years.

Rezolution proved to be the perfect production partner for the series, having been a strong backer of Indigenous content for the last 15 years. Together with Deer, the company set about creating a light-hearted drama that could also carry the weight of the political and issue-based storylines they wanted to thread through the series.

“We pitched it as ‘Sex & The City Mohawk-style,’” Fon recalls. “Right away, everybody got it. We wanted to do something that would have political undertones, but with the comedy you’re able to let people in without pointing the finger – and, for us, that’s what our projects are about. We want them to be entertaining and hopeful and fun and then you just slide in the politics underneath so it’s not in your face. We thought it was a great idea.”

The show is based on Deer’s own upbringing in Kahnawake, a Mohawk reserve in southern Quebec that also doubles as the setting for the series. It’s also the home town of LeBorgne, who has known Deer since the latter was her counsellor during summer drama camp. Having initially auditioned for the role of Caitlyn, LeBorgne subsequently read for Zoe, the part she ultimately landed.

“Zoe’s a Type A, uptight perfectionist, she’s a lawyer,” the actor says. “She cares way too much about what people think of her, inside the community and outside the community. Her mother raised her with these extremely ridiculous high expectations, so she always felt like she had to do whatever she could to live up to that. The pressure is building up and she needs to find a way to let it all out. She finds her outlet in the world of kink.”

It was during the pilot that LeBorgne learned her character would have a sex addiction, a “daunting” aspect of her first major acting role. “After the pilot, it was another two years before we got the greenlight to make a season,” she adds. “So it’s been a long journey. Here we are five seasons later.”

The actor says viewers have largely been very positive about the show, adding that while responses have been mixed in the community it represents on screen, most people understand what Mohawk Girls is trying to say. “They get that we’re telling a story but we’re also trying to tackle some more Indigenous issues in Canada – racism, colonisation, identity, belonging, within the community and outside as well,” LeBorgne explains. “I always joke that being Indigenous is so complicated and, no matter what your stance is on anything, being Indigenous is political. It doesn’t matter.”

When the credits do roll for the final time, Fon says she will look back on a show that broke barriers as one of the first scripted comedies with Native characters written for women and created by a Native woman. “Whether it’s going to have a legacy, I think we’ve been breaking stereotypes in the sense that people didn’t know Native people had these types of issues,” she says.

LeBorgne picks up: “What our show does really well is, for one, only cast Indigenous actors in the Indigenous roles. Sometimes in Hollywood it doesn’t happen. I know it was very important to Tracey to cast the four lead women as actresses who all have a different look because they wanted a good idea of what Indigenous women look like in 2017. Our show has really helped to break down those stereotypes.”

Rezolution recently celebrated success at the Sundance Film Festival with Rumble: The Indians Who Rocked the World, which is now in the race for the Oscars. The Montreal-based prodco has also partnered with Canadian national broadcaster CBC to develop Little Bird, a scripted series Fon calls the “Roots of Canada,” which addresses the ‘Sixties Scoop’ that saw around 16,000 Indigenous children taken from their families and communities and put up for adoption across North America without the consent of their parents.