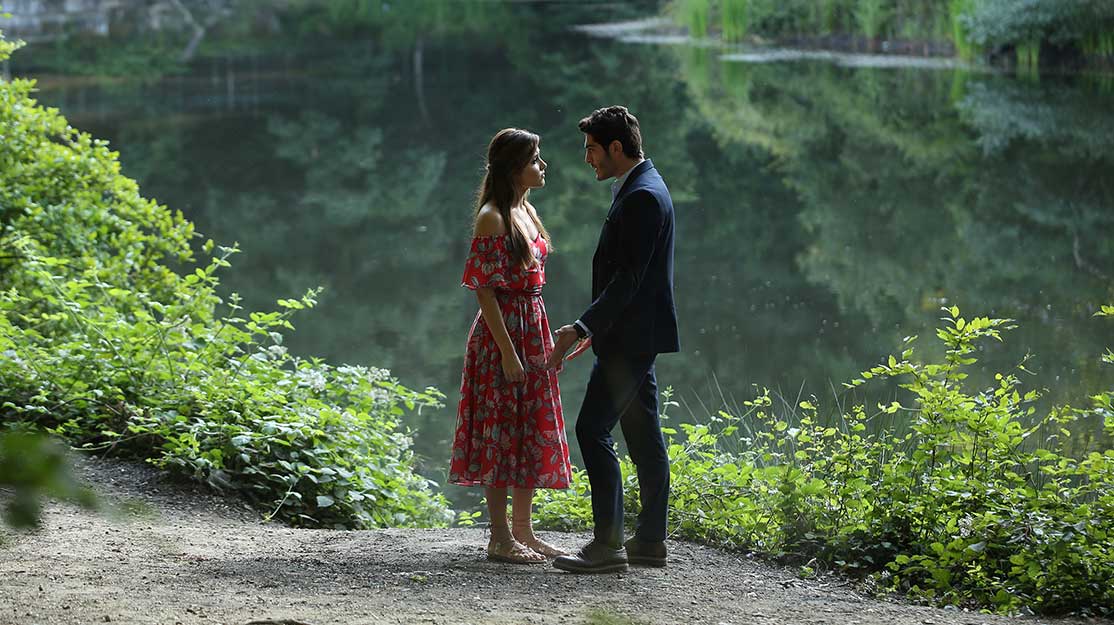 The path to romance proves bumpy in Turkish comedy-drama Hayat. DQ hears from producer Burak Sağyaşar about making a series for a younger audience and why fantasy shows could be on the increase in Turkey.

In a sign of the growing reach of Turkish series around the world, more than 20 million viewers in India have been watching clips of one romantic drama before it has even aired in the country.

The show in question is Hayat (Aşk Laftan Anlamaz), the story of an affair between the eponymous woman and a businessman named Murat. It airs on Show TV in Turkey.

Following her graduation, Hayat is struggling to find a job and her mother threatens her with an arranged marriage. As she runs from one interview to the next, she scolds a young man in a taxi line – who turns out to be her next interviewer, Murat. After a case of mistaken identity, she ends up working with him, and so begins a rollercoaster of events with their relationship at the centre.

The series, which runs to 102 episodes, is produced by Bi Yapim and distributed internationally by Inter Medya. The cast is led by Hande Ercel as Hayat and Burak Deniz as Murat.

Here, producer Burak Sağyaşar tells DQ about the unique origins of the series as he sought to make a show targeting younger viewers.

What are the origins of the show?
This show was based on our desire to create a series that could stand out among the many productions that have been unable to fully capture young audiences. Generation gaps were growing between young audiences and producers. Having observed that, I decided to produce Hayat. A lot of young stars in Turkey wanted to work with me when I founded my company, Bi Yapım. So in a way, Hayat was a perfect match for that – with the universe it created, its cast and the trendy love story it told.

How was the story developed for the Show TV?
There was close cooperation with the network. Even though this is the first TV series I have produced, they trusted me completely and only made minor suggestions along the way. The result was completely original and the idea belonged to me. I hear it’s attracting incredible interest in India right now and the sales are going well worldwide, which is all exciting for me.

How did you find the right balance of comedy and drama?
In Turkey, productions are usually one or the other. Any ‘romantic comedies’ are based on situational comedy with some sweet banter between couples. The biggest difference with Hayat is the intense dramatic journey. When the story was first designed, it was a drama, which was then adapted to comedy. Thus between Hayat and Murat, you actually watch a solid love story.

How would you describe the writing process?
I shared my idea with our writers and creative teams, then the story was conceptualised with a projection of the plot line. Finally, the script drafts were created. The one thing I prefer to never follow is a ‘make it up as we go along’ rationale. It’s a different thing to make manoeuvres according to the ratings. But knowing what you will be shooting and watching without any surprises is another thing. I always want to be able to see ahead, even if those stories may change later on.

How do you find enough storylines to fill 102 episodes?
We first laid down the groundwork. In my system, stories are worked on in batches of 10 episodes – which can change afterwards – and five episodes are approved in advance. I built close relationships with our writers and sometimes I even attended script meetings for hours. We have even created more than 400 episodes on other projects working this way.

How did the writers and directors develop the visual style and tone of the series?
During pre-production, three months prior to broadcast, our director and writers met at the production company every day. They were accompanied by creative department heads. At those meetings they discussed all details regarding the colour, tone and visual style of the show, as well as what camera, lighting equipment and other materials were going to be used – anything you can think of. I have a motto that I always like to say: ‘Everyone will see the dream on the table the same way.’

What do the lead cast members bring to the series?
Hande Erçel and Burak Deniz are two very promising and talented actors. After many auditions, I decided they were the perfect couple. There was very meticulous styling work done and Hayat and Murat emerged as a result.
Hayat has probably contributed to many people’s careers, but with Hande and Burak, it gave their careers a quantum leap. Their dedication, discipline and acting contributed greatly to the show. I’m happy to have worked with them.

Where was the series filmed and how were locations used in the script?
The series was filmed in and around Istanbul. We decided where the story would take place and the writers wrote accordingly. Beautiful and romantic locations were selected for shooting.

What were the biggest challenges during production?
We did not have any major problems or challenges, from episode one right up to the finale. Working with professionals, we were able to quickly take care of all minor troubles among ourselves. That’s why it was a project I happily worked on.
But referring to my earlier comments on the writing process, I can say this: at the risk of ratings dropping, there were at least five sharp turns in the storyline of Hayat along the way. Thanks to the support and collaboration of the network, and being able to read the audience reactions well, we were successful. Still, that was quite a challenge and a risk.

How do you think Hayat stands out from other dramas on air in Turkey?
As a producer, I try to keep track of everything on screen. There are certain periods when the industry enters a vicious circle of ‘temporary blindness’ and you keep seeing similar works on TV. In the name of raising awareness, as I mentioned before, Hayat is a series that was built on a dramatic structure. Telling the charming and impossible love story of two young lovers embellished with the components of a youth series and a different narrative style, it has become successful and stood out from its rivals.

How are television dramas changing in Turkey and what new stories are being told?
Successful producers in Turkey are those that follow global trends as well as observing their local market. We also follow innovative and exciting stories but, sociologically speaking, in Turkey it is the female audience that drives ratings. We can include women from all categories in this segment. Then come the youth and male viewers. That is why love stories always attract the most interest.
I think the fantasy genre will be the rising trend in the near future in Turkey. The world is transitioning into a new dimension with futurism, with artificial intelligence, space technologies and visionaries like Elon Musk currently among the top trends.
With the proliferation of digital platforms such as Netflix, Hulu and others, more courageous and futuristic stories will be told.

What are you working on next?
Bi Yapım and Tims Productions recently merged in a major deal. Tims Productions is the creator and production company of Magnificent Century and a number of works that have become global hits. From now on, producer Timur Savcı and I will be continuing as partners under the new company name, Tims&B Productions. We are currently working on three new projects, which will be on air in the new season.
Our action series The Oath, which is on air now, has been one of the most talked about series in Turkey and around the world. It was featured on Fresh TV at the last MipTV in April. We are working hard to bring many more successful projects to life.