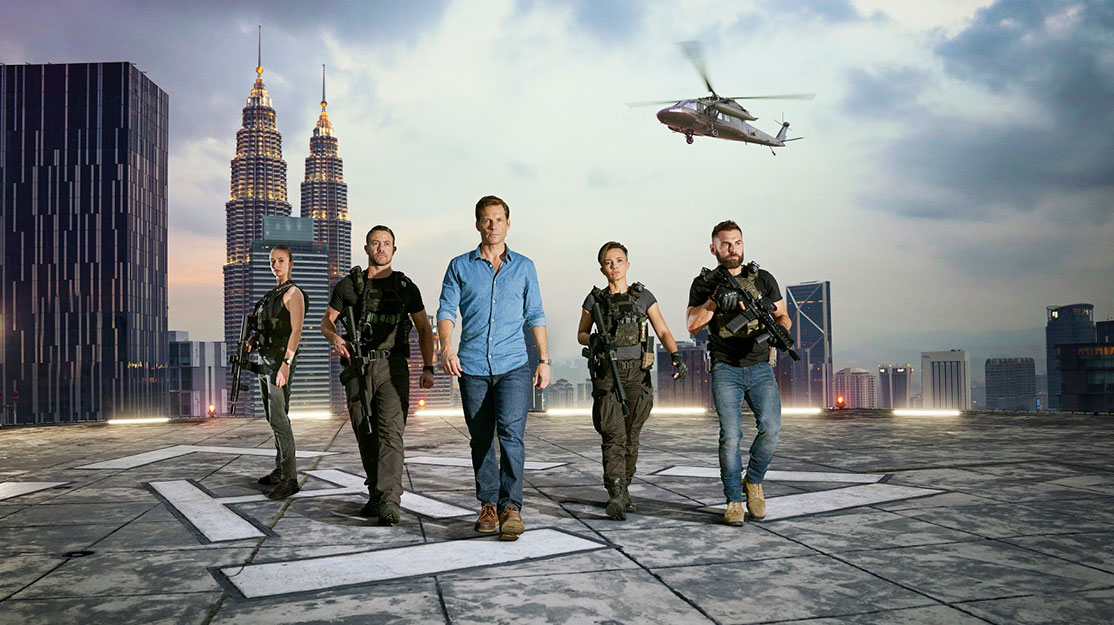 Kenton Oxley, CEO of Knockout Production Services, reveals how locations were sought for the seventh season of Sky and Cinemax action drama Strike Back, which was filmed in Malaysia.

The process of finding the perfect locations for any drama production is a fantastic experience, but when producer Left Bank Pictures approached us with a view to filming Strike Back season seven in Malaysia, we found the sheer number of locations needed for the script exploded, just like the drama itself.

With approximately 100 unique locations used – within an intense schedule – we ensured the cast and crew filmed in the most beautiful, grimy, secluded and dense locations in Malaysia.

Filming revolved around Kuala Lumpur, Penang, Johor and the surrounding jungle. With the intense heat (40°C in the shade) and 90% humidity, filming was a challenge, but worth it when you watch the series. Malaysia delivered in spades.

We provided a detailed analysis of Strike Back’s infrastructure needs, based on the powerful and action-packed script. We have a great team on the ground in Malaysia, alongside 17 other global locations, so we were spoiled for location choice. Along with the rustic street locations, various dark and secluded warehouses where shootouts would take place and jungle territory, there were many settings that had to stand out and make a particular impact.

One of these was for the entrance of Colonel Coltrane, played by Jamie Bamber. The scene was shot on the rooftop of Menara KH’s Heli Bar, with the beautifully imposing Petronas Towers in the background. The location became the backdrop for the official Strike Back 7 press photography (pictured top) and Colonel Coltrane enjoyed an introduction like no other – from a venue on top of the world.

Another location with gravitas is the missile warehouse, packed with technology and power. The location chosen was in Port Klang, approximately 350 kilometres from Johor. The humid and varied jungle scenes were shot in Hulu Langat and the street scenes were set in Armenian Street, part of the UNESCO World Heritage site in Penang.

The variety of locations needed proved intense, but our Malaysian location manager, Shan Iman, and our local line producer, Zurina Ramli, have extensive experience and knowledge as well as a database of locations. To add to this, we worked with the film commission in Johor and engaged local scouts, providing thousands of pictures of potential sites.

Working from the script, we sent back a potential locations document and awaited the director and producers’ choices. It was then over to us to secure permission from the location, government and local authorities to get releases and, finally, contract the location.

Sometimes this is straightforward. In developing markets, people embrace the idea, but dealing with individuals, big and small corporations, government bodies, local councils and associations while also educating proprietors and owners about the process and contractual commitment for filming is time-consuming.

With locations secured, we looked to logistics. For example, when we shot in a densely populated block of flats, we obtained permission from the flat owner, their neighbours and their neighbourhood association. Following this, we informed the local council about road closures. And because Strike Back involved firearms, chase scenes and explosions, we needed to inform the Royal Malaysia Police too.

As well as getting through all this red tape, we hired security to help with road diversions, while health and safety support was required in extremely remote locations in addition to basic amenities like power, water and waste management. We had to ensure complete independence and self-sufficiency. It was hugely satisfying to achieve.

Accomplishing this is challenging when local wildlife can be lethal. Ensuring medical kits include anti-venom for all local snake species, among other life-saving medication, is crucial. Every eventuality is covered, from medical emergencies through to evacuation procedures. Other than coming face-to-face with a huge boa constrictor on location in the jungle (humanely caught by our on-set snake handler), I’m pleased to say the drama was left to the script.

Our most challenging location was a recently closed shopping mall. Simply powering up the air conditioning was a massive task. Complexities of property ownership added complications, but the location was needed and it was just another day at the office for us.

In contrast, a favourite filming location loved by all was Penang. It is a stunning city; a very welcoming environment that delivers as an amazing shooting location.

Left Bank Pictures executive producer Sharon Hughff agrees that the locations delivered: “When Left Bank Pictures embarked upon filming Strike Back in Malaysia, the creative challenges were immense. Not only were we looking to stage ambitious, complicated action set pieces, but Malaysia had to double for Goa, Indonesia and Hong Kong

“The beauty of the landscape, from the jungles around Johor Bahru to the neon futuristic cityscape of Kuala Lumpur all made for an incredible backdrop that exceeded our expectations and made for an epic on-screen production value.”

One of our aims at Knockout is for the locations to stay in the viewer’s mind after they watch the series. Certainly, one of the most jaw-dropping sequences I enjoyed seeing develop was at Sg Pendas, Johor, featuring a seaplane take fire as it flies over the immense lake. It is a stunning sequence with a stunning backdrop. For me, that’s what pre-production is all about – ensuring the great script and cast is supported by the best crew, infrastructure and locations in the world.