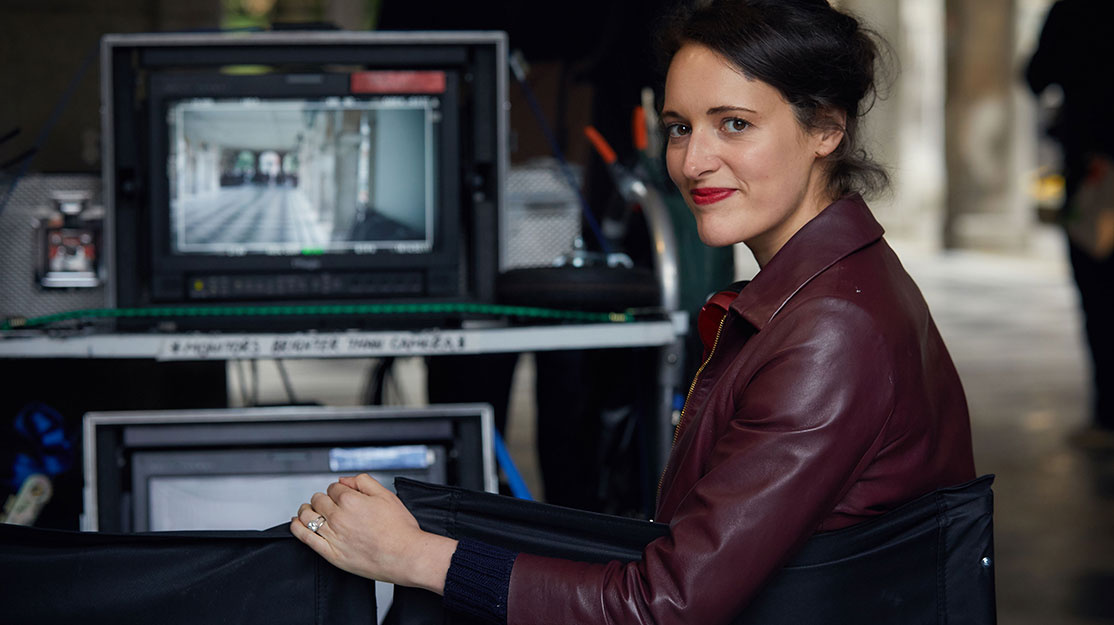 As US espionage thriller Killing Eve lands in the UK, DQ hears from lead writer and executive producer Phoebe Waller-Bridge about refreshing the genre, infusing drama with comedy and the joy of writing.

“She’s utterly unique,” actor Fiona Shaw says of Phoebe Waller-Bridge (pictured above), the actor and writer behind British comedy drama Fleabag and US spy thriller Killing Eve. “It’s fantastic to have someone who is a master of language writing television. It’s wonderful – not just a master of narrative or a master of seeing things, but a master of words. It’s just great fun to read [her scripts] and be allowed to play it.”

Cue an act of faux embarrassment and modesty from Waller-Bridge, as Shaw, who stars in Killing Eve as MI6 head Carolyn Martens, talks about the writer while sitting beside her at a Bafta screening of the British-made US drama, which launched in April this year on BBC America but has now travelled back across the Atlantic to BBC1, where it debuts this Saturday. The full six-episode boxset will be released on BBC VoD service iPlayer immediately after the first episode has aired.

Waller-Bridge should be used to receiving plaudits after her award-winning adaptation of her own stage play, Fleabag, saw her become one of the most in-demand talents in the UK. But it was Sally Woodward Gentle who, after much persistence, managed to secure the writer to adapt Luke Jennings’ Villanelle novellas for television as Killing Eve.

The series, which is now filming its second season, follows Eve (Emmy-nominated Sandra Oh), a bored, whip-smart MI5 security officer whose desk job doesn’t fulfil her fantasies of being a spy. Her life changes, however, when she enters into an epic game of cat and mouse with Villanelle (Jodie Comer), a mercurial, talented killer who clings to the luxuries her violent job affords her. The series sees them go head-to-head in a chase across Europe that is in equal parts funny, smart and action-packed.

In her own words, Waller-Bridge discusses the challenge of refreshing the spy genre, infusing drama with her own brand of comedy and the joy of writing.

Comedy isn’t just about telling jokes but about presenting characters in unexpected situations…
My role in life as well as in writing is to never let it get too heavy. I think people fall in love with characters who make them laugh, and comedy is such a huge part of surprising people. I always want to be surprised and a joke always surprises me, especially in a murderous drama.

The writer was forced to be creative when coming up with insults, with Eve calling MI5 boss Frank Haleton (Darren Boyd) a ‘dickswab’…
I was thinking really hard about what to call Darren Boyd. You write those things because you’re not allowed to say really rude words. BBC America said, ‘Unfortunately you can’t say that,’ but that forces you to be more creative sometimes, and ‘dickswab’ was that. I looked it up and it turns out someone’s name is Dick Swab.

Sandra Oh was destined to play Eve and nothing would stop Waller-Bridge from getting the Grey’s Anatomy star…
Sally [Woodward Gentle] heard from her agent several times that Sandra wasn’t available and I looked at Sally and said, ‘I’m just going to do it one more time.’ It was an operation. I wrote a long email about why it had to be Sandra, and from the moment she came into our imaginations as Eve, it couldn’t be anybody else.
Then we had a Skype call, which was really strange because the moment we pressed video on Skype, we were wearing exactly the same outfit. So it was like, ‘This is happening.’

The series’ heightened take on the spy genre comes more from who Villanelle is than Waller-Bridge’s desire to play with the rules…
It was more about what’s inside Villanelle, that she’s designing her own life. She’d be like, ‘I don’t give a fuck, I’m riding a motorbike.’ It’s not about looking at Villanelle being cool, it’s about her feeling cool and that’s what’s feeding her, or feeling like she’s living the life she wants to live.
She can have sex with anyone she wants and she does; she can have a motorbike and she’ll eat a tiny sandwich on a hillside because she can. She’s kind of in the ‘Villanelle’ movie of her life. She’s not entirely sure who she is and she’s constantly trying to play different people, but without insecurity, which I think is what’s fun about her. She goes, ‘I’m going to climb a drainpipe in a weird see-through blouse,’ not because that makes the show sexy but because Villanelle says, ‘That’s what I’m going to do and nobody’s going to stop me.’ It was mainly through her playing around. She cracks herself up.

But taking on such well-trodden ground as the espionage thriller meant the writer wasn’t afraid to freshen things up…
When I’m trying to write something, there’s a time when I feel like I want to see something, and it comes out as, ‘I want to see Fiona Shaw do that.’ It can be as simple as that – to have these amazing actors do or say something surprisingly funny. It keeps coming back to doing something surprising.
So many of the tropes work and parts of the genre fit together so well for a reason, because they work and they fell good. So it’s not that you completely discard them, it’s about how you freshen them up to feel surprising again.

The source material offered the chance to create a series with two lead characters…
Luke Jennings introduced these characters and their world so vividly that you’ve got two shows in one. You’ve got the office drama with Eve, the accessible character who you think you know, and then all these details come out and you reveal this everywoman to be something more extraordinary.
On the flip side, you have this extraordinary woman [Villanelle] who you’re slowly revealing has a need to be normal, and that feels like two stories that would otherwise have been separate. Suddenly you have two heroines and two villains at the same time.

The series generated a lot of buzz in the US for its LGBT representation, though Waller-Bridge says this was part of the creative process and not a political point…
It’s purely from character point of view – the idea that these two women just became obsessed with each other in every possible way. That was exciting, new, nuanced and real. It was a different kind of passion and it just felt very natural to the characters. The moment Eve knows Villanelle exists, a switch is turned on in her that hasn’t been turned on before. The first time they meet is the moment they fall in love, and that was a very natural, normal story point for us. They’re just women who adore each other, who are attracted to each other. There’s a sexual power play between the two that isn’t for anyone else, it’s just for them. It’s all about what happens between these two and how it effects them.

Waller-Bridge says the joy in writing Killing Eve was the faith shown in her to do it in the first place, and the freedom she was given to write the story she wanted to tell…
When I’d written Fleabag as a play, it was a monologue and it was ostensibly a comedy but then Sally came along and said, ‘Espionage thriller – go!’ [The joy is] that moment when you go, ‘Yeah alright, fuck it, I’ll try that.’ That moment of faith and ‘please break the rules’ coming from the very beginning – and then the challenge is to break the rules. It wasn’t like I was working within parameters, and BBC America was behind that as well.
The real joy comes when you’ve cast it and you’re starting to see these characters come to life. You get the rushes, you see what they’ve filmed that day, you’re on set and see the actors fill in the cracks and then you’re just like, ‘They’re not just in our heads anymore.’
Killing Eve had been in our hearts for so long and then you see the characters walking and talking, and then you get to carry on writing for them and building that relationship. I remember so many plot twists that happened over my kitchen table with Sandra talking about, ‘What if she did this, what if she did that?’ Then you’re completely aligned with everyone like that. It’s the best.

To reach this point in her career, Waller-Bridge found the fun in writing, surrounding herself with people – her “family” – who push and support her.
I went to drama school, left and nothing happened for ages. And in that gap of nothing happening, I met a director called Vicky Jones [The One], who became my best friend, and we just decided we wanted to do stuff for fun on the side of failing as actors and directors.
So we started our theatre company [DryWhite], producing work. And it was stuff we were doing for fun that took on a life of its own. It was Vicky who eventually said, ‘Just write a play,’ and so then I did – that was Fleabag. Then after Fleabag, I said to her, ‘You write a fucking play.’ And that did brilliantly well too.
That has been a huge part for me, finding your people who want to push you and you can push in return and that’s your gift to each other. It’s so lonely, so hard and so competitive comparing yourself to other people. So if you can find people you have fun with, if you crash and burn, you’ve got someone to say, ‘We’re going down together.’ You build your family and start working with the same people again.
I met Jenny Robins, the producer, doing Killing Eve. We bonded and continue to work together. [Director] Harry Bradbear worked on Fleabag and set this show up. Just build your family.