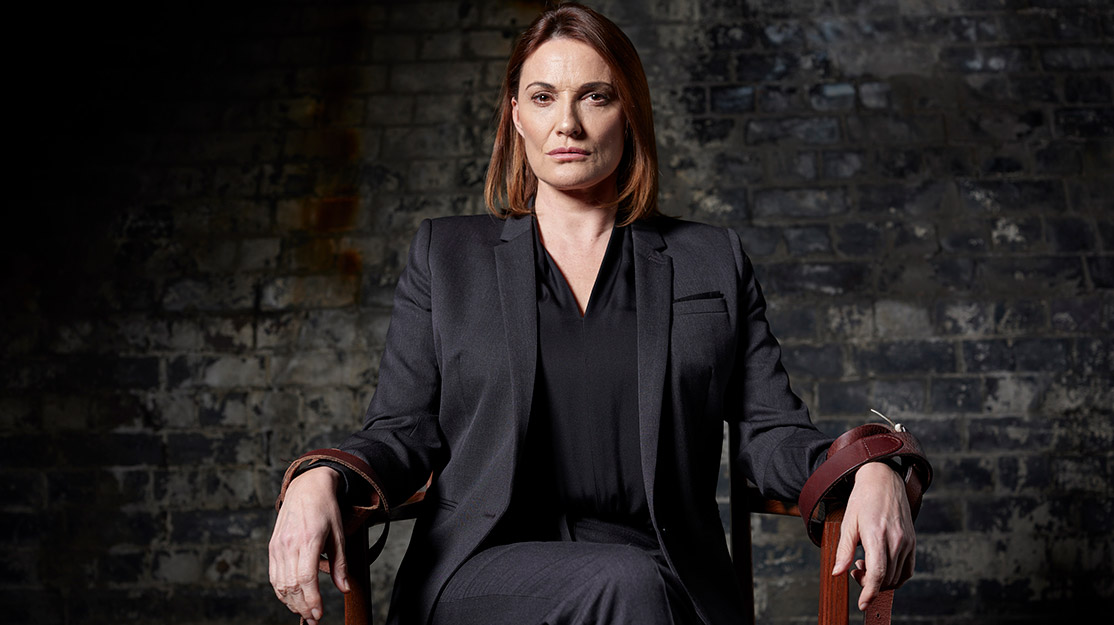 After a season one conclusion that left the Twittersphere outraged, Bancroft writer Kate Brooke tells DQ what’s in store for the eponymous rogue cop in season two and why there’s no character like her on TV.

When it comes to crime drama, viewers have an expectation that by the time the credits roll, the culprit has been discovered and justice has been served, with the investigating police officer rightly celebrated for a job well done.

But when ITV miniseries Bancroft concluded in December 2017, the audience was left fuming that DCI Elizabeth Bancroft was not only the villain of the story but that she had also got away with her crimes.

“People wanted resolution,” says creator and writer Kate Brooke about the reaction to the show’s climax. “I felt like it was an end. It wasn’t justice, but not everything is about justice. We’re in a world where bad people get away with things and I really wanted to do a show that didn’t have an obvious redemption at the end of it.”

The story introduced ambitious and respected Bancroft, played by Sarah Parish, who is targeting a violent gang suspected of illegal arms dealings. But when a cold case being reinvestigated by DS Katherine Stevens (Faye Marsay) threatens to bring buried secrets to the surface, Bancroft does everything she can to stop the truth from emerging.

By the end, Bancroft has earned a promotion despite being revealed to the audience as a killer, with DS Stevens left in a hospital bed. Twitter lit up with unhappy comments.

“I just wanted to hit an audience with an immoral female because there’s still not many of them around,” Brooke says. “I had the idea six years ago. It took so long to get onto the screen because commissioners would go, ‘So the twist is that she didn’t do it?’ I’d say, ‘No, the twist is that she did do it.’ and then they’d say it was not for them.

“I felt it had an ending – it just didn’t have an ending people wanted. But that’s ok.”

Brooke was in India when, jet lagged in the early hours, she tuned into social media to see the reaction unfold in real time. “I thought, ‘Oh shit, they hate my show.’ Everyone was so furious about it but actually that’s what they need,” she says. “The truth is, people are furious because they’re being moved in some capacity. In a world of television where it’s hard to break through, we broke through. We did really well.”

Produced by Tall Story Pictures and distributed by ITV Studios Global Entertainment, the show proved to be one of ITV’s best-performing dramas of that year with a series average of 6.7 million viewers and a 25.1% audience share. Season two was announced in February 2018 and the three-parter will debut in the UK on New Year’s Day with all three episodes airing on consecutive nights.

Picking up some time after the end of season one, Bancroft is riding a professional high after heading up a newly merged police force and delivering extraordinarily low crime figures. But isolated from her estranged son Joe (Adam Long), she is facing increasing pressure from her pact with crime boss Daanish Kamara (Ryan McKen).

When a disturbing double murder causes her professional and personal lives to collide, she is forced to confront a new enemy while suffering the repercussions of her past actions.

“Everything she thought she wanted she’s got, but actually she’s a very lonely person,” Brooke says of Bancroft. “We really make her suffer in season two. There’s a desire [from viewers] for justice, especially justice for women, but look at Peaky Blinders. Tommy Shelby [played by Cillian Murphy] is constantly killing people but people don’t mind. A woman killing someone and getting away with it – we’re not allowed that. That’s why I wanted to do it.

“She’s not Villanelle from Killing Eve, she’s not a psychopath. She can feel things. But the key thing is she lives within society. She walks and breathes amongst us, and she’s a really good policewoman. She’s bloody good at her job. She just happens to be a little bit bad on the side. We just haven’t ever had someone like her. What was hilarious was people thinking this was going to be another ITV crime thriller and then it was like, ‘Oh shit, she killed someone.’ That was quite funny. By the time it got to episode three, people could see something interesting happening, so it will be interesting to see how they react to season two.”

Bancroft’s world is explored in more detail this time around with the introduction of her mother Carol, played by Francesca Annis, and the opportunity to drill down into her psychology and discover what made her the person she is.

“I don’t think she should be excused, but we can begin to try to understand her,” Brooke continues. “There’s no sob story. That’s not the point. We know the show a bit better, we know the pace, but it still has these massive twists and turns, which is what an audience wants.”

Season two also sees Bancroft in a more grounded world, with Brooke admitting season one crossing into melodrama at times. Though she wanted the series to be more heightened than the average television crime drama, building the rules of the procedural also gives the character some boundaries to push against.

“The thing about Villanelle is she’s in a fantasy world. She can sort of do anything,” says Brooke, who herself has worked in fantasy when adapting Deborah Harkness’ A Discovery of Witches for Sky1. “Bancroft couldn’t just put on a disguise and shoot someone. She’d get caught. She lives in the real world. What is important and what we’ve learned from season one is you have to earn all the deaths. She can’t just go and kill someone. That’s why it’s a difficult show to write because if she was just killing everyone like Dexter, it’s just Dexter. If it was a story of the week, there’s no grounding to it, so we really try to earn the kills – and there are kills. We earn the kills and that’s the way to ground it. She’s basically a survivor.

“There are some very clear rules for her. She doesn’t enjoy killing. She’s not a psychopath who finds it fun. But she will do it if she has to. She will do it if someone comes up against her and either she or someone she loves is threatened. Then she will do anything.”

Brooke wrote the series with co-writer Ben Morris, who first worked with Brooke as a researcher on period drama Mr Selfridge. They start with Brooke’s story outline before breaking down the episodes in an American-style writers room with script editor Kathryn Shrubb.

“I started in theatre so I’m a collaborative writer – I like talking to other people and there’s lots of young writers who don’t get an opportunity,” Brooke explains. “I could have written all the episodes, but he’s fantastic in a room so we write very collaboratively. It’s great to be working with young writers.”

However, she admits that unlike in the US where the showrunner system is prevalent, the UK industry is still producer-led. “Here, it was very useful that I really knew the show. It’s quite high risk and I had to fight to keep the vision,” she says. “It’s been a very happy production but the UK traditionally has creative producers who like to hold the reins very tight and they’re not letting go without a fight.”

In particular, she says she had to battle to keep Bancroft’s mother Carol in the show “because it’s not plot. There was a lot of ‘cut the mother’ and then they got Francesca Annis to play her and suddenly everyone loved the mother! But she holds her place, it’s character and we’re a very plot-driven show. We want to open up those questions about Bancroft.”

Another key influence on season two of Bancroft has been Sarah Parish, who stars as the eponymous detective. Brooke spoke to her before putting pen to paper and then gives her a first look at the scripts.

“Sarah has inhabited her so fantastically,” she says of her leading actor. “We get on like a house on fire. She’s magnificent. She’s done such a great job. She just gets Bancroft. She’s a great ally for the show.”

Like season one, this new run of three episodes promises to pack in plenty of drama, with Bancroft left reeling as her professional and personal lives crash into one another in spectacular fashion. It’s a rollercoaster ride that Brooke hopes will start the new year with a bang and keep viewers hooked until the end.

“There’s lots of twists and turns and I hope it will deliver like season one delivered those massive surprises, and I hope that psychologically it will be more grounded,” she adds. “That’s the plan.”