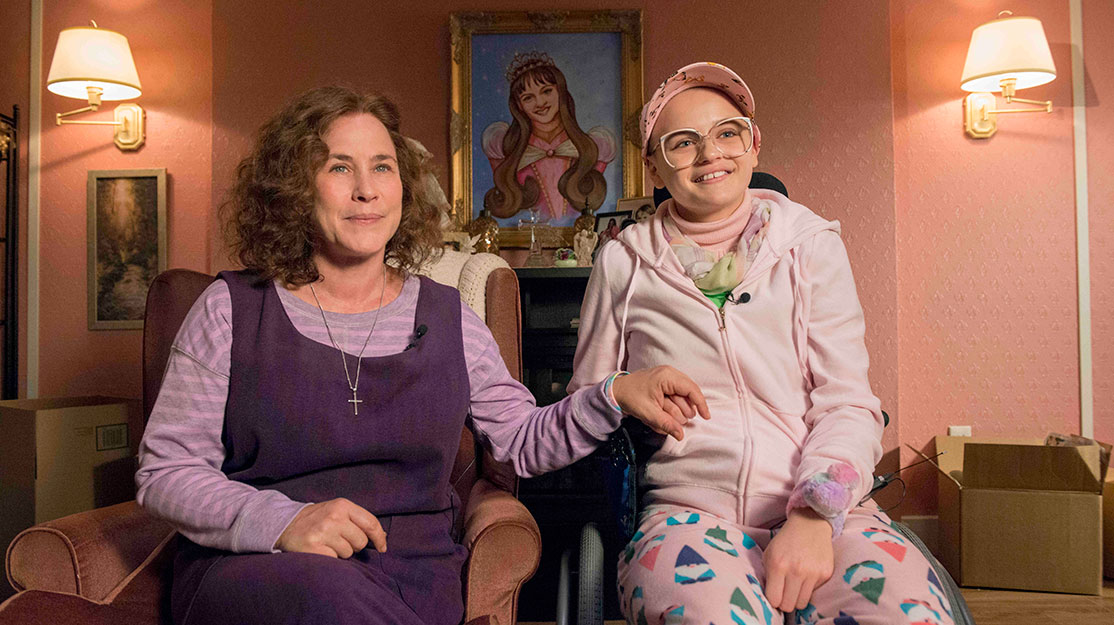 Oscar-winning actor Patricia Arquette talks to DQ about portraying real people in Escape at Dannemora and The Act, transforming herself for roles and her directing ambitions.

Five years ago, Patricia Arquette blew away the awards competition with her performance in Richard Linklater’s coming-of-age movie Boyhood, winning a Bafta, an Oscar and several other accolades.

This year, the actor has been swept up in the awards chatter once again – but this time it’s her small-screen work that’s earning plaudits.

Her role as Joyce ‘Tilly’ Mitchell in Showtime’s 2018 limited series Escape at Dannemora has already earned her best actress prizes at the Golden Globes, the Critics’ Choice Awards, the Monte Carlo TV Festival and the Screen Actors Guild Awards.

That both shows are based on true stories is just a coincidence, according to the star, who has previously appeared in TV series including CSI: Cyber, Boardwalk Empire and Medium. Arquette’s movie credits include True Romance and Stigmata, having made her screen debut in A Nightmare on Elm Street 3: Dream Warriors in 1987.

“It’s just the way these things happen,” Arquette tells DQ in Monte Carlo ahead of the Golden Nymph Awards ceremony where she would subsequently triumph. “These roles just fall into your lap. It wasn’t a plan at all. In fact, I thought I would probably take a break from doing anything that heavy again [after Tilly], but The Act was fascinating material. I wanted to do it.

“I don’t usually want to play something that’s exactly like what I just did, because that’s boring. When I look at a script, first of all, it’s got to be well written in whatever genre it is. That’s important to me. And right now, I am being picky about roles, just because it’s a lot of energy expense working, especially like that, and I’m kind of tapped out. So I have to work on something that’s going to give me a lot of energy.”

The Act, which launched on US streamer Hulu in March, is an anthology series that dramatises startling, stranger-than-fiction crime stories. In the first season, Joey King plays Gypsy Blanchard, a girl trying to escape the toxic relationship she has with her overprotective mother Dee Dee (Arquette), but her quest for independence opens up a Pandora’s box of secrets that ultimately lead to murder.

The story is based on a 2016 BuzzFeed article written by Michelle Dean titled ‘Dee Dee Wanted Her Daughter To Be Sick, Gypsy Wanted Her Mom To Be Murdered,’ which recalls a seemingly model parent who appeared to be taking care of her gravely ill daughter. Only she wasn’t sick at all, and Dee Dee was later found to be suffering from Munchausen by proxy, a condition characterised by a parent exaggerating or causing illness in their child.

Meanwhile, eight-hour miniseries Escape at Dannemora, directed by Ben Stiller, dramatises a 2015 prison break in which two escapees, both convicted murderers, were helped by a married female prison employee who reportedly had affairs with both men. Their breakout from Clinton Correctional Facility, known as Dannemora after the local town, led to the largest manhunt in New York State history.

Benicio Del Toro plays Richard Matt, an anomalous yet powerful force within the prison who masterminds the escape, while Paul Dano is his co-conspirator, David Sweat.

Arquette co-stars as Tilly, a working-class wife and mother who, after becoming sexually involved with both men, assists them in their escape, hiding hacksaw blades in frozen hamburger meat and agreeing to be their getaway driver.

Talking about her approach to playing real people, Arquette says she avoids any attempts at impersonation. “I definitely didn’t want to do an imitation, and it really bothers me when I see people playing people. It’s not enough to just do their physical reality,” she says. “You have to dig in deep and have something human that you’re holding on to. I don’t think you can really ever play anyone – like, really be them. You’re always playing some version of them. But my job is to kind of anchor it in some kind of real person; some structure or mechanism that makes sense.”

As for The Act, Arquette says there were “a lot of weird layers” to the controlling, manipulative Dee Dee, requiring significant research in preparation for the role.

“Even unrelated to Dee Dee and Gypsy’s story, I found this amazing documentary about a woman who had Munchausen by proxy and she was in prison because her kid died,” the actor says. “I would just watch her and she’d seem OK, and then she’d just go in and out of these fugue states. I thought, ‘Oh my God, she’s really mentally ill.’ Then I ended up on chat rooms with people with Munchausen and listening to kids digging really deep about their parents who had it. So there was a lot of different research that I think helped me.

“There are a lot of layers of self-deception, and there are a lot of subconscious mechanisms and emotional underpinnings that are pushing people to make certain decisions, and that helps me to know that process. My mom was a therapist and my dad was an actor, so I think I use a lot of those elements to build people.”

Having piled on the pounds to play Tilly, Arquette began to lose the excess weight once filming finished – but then had to stop when she landed the role of Dee Dee. “But Dee Dee was 120 more pounds and I was like, ‘I’m not gaining 120 pounds. I will be dead on the ground,’” she says. Instead, she wore padding or extra clothes to bulk up her appearance, which also gave her the chance to escape the character when she took off her costume every evening.

After playing Dee Dee, Arquette says she has more empathy for the struggling mother. “Having said that, I don’t think it’s excusable what she did. I don’t like her. But I do think she’s seriously mentally ill and I don’t think we understand this condition at all.”

By comparison, the star says Tilly’s character is much more on the surface in terms of how she tries to manipulate both Matt and Sweat and is in turn manipulated by them. “It’s much more obvious what she’s doing, but for Dee Dee, it’s way more subterranean and self-deceiving in a whole different way. She really has such complicated mechanisms and I think she’s just mentally ill, which adds several different things.”

Escape at Dannemora, which debated on Showtime in November last year, also gave Arquette the chance to reunite with Stiller, alongside whom she starred in 1996 feature Flirting with Disaster. She describes the reunion as “awesome.” But while it was “so fun” acting with him, Stiller was “so different as a director,” she says. “He really made space for us to explore things and was really patient and was really conscious of everything – the look, the sound, the sets and the wardrobe. He was all-in all the time.”

Arquette comes from a family of actors. Her grandfather was Cliff Arquette (Dragnet) and her father Lewis Arquette (The Waltons), while her siblings include Rosanna (Desperately Seeking Susan), Alexis (Pulp Fiction), David (Scream) and Richmond (Zodiac).

After an early screen career dominated by feature films, she landed the lead role in NBC supernatural drama Medium in 2005, playing Allison DuBois, a medium employed as a consultant by a Phoenix district attorney’s office. The show ran on NBC for five seasons, before transferring to CBS for a further two years, and the role earned Arquette two Emmy nominations and three Golden Globe nods. But unlike today when actors can switch easily between the two formats, Arquette’s decision to move to television came at a time when the small screen was still considered second class to the cinema.

“People were like, ‘What the hell are you doing? You’re not going to work anymore in film,’” she recalls. “But I was already seeing that it was becoming harder and harder to get parts in films because they were stopping making them. They just weren’t making mid-budget movies.

“I also thought it was a cop-out. I was like, ‘Why can’t we do good work on television?’ I think that’s lame, we should be doing good work on TV. Because especially for network TV, all you have to do is watch some commercials and you don’t have to pay for it. So if you’re an elderly person, or you’re a person living in an old folks’ home or something like that, they basically get free entertainment, and why shouldn’t we be doing good free entertainment for older people or housebound people?”

Having directed two episodes of Medium, Arquette is increasingly positioning herself behind the camera, with a couple of film projects in the works. She won’t reveal the details just yet, however.

“That’s exciting, because I love other actors and I want to help them have good parts and be good in them and dig deep,” she says. “A lot of times I’ll watch things and I get really mad at the directors. I’m like, ‘Why did you keep your camera on that person’s face for so long?’ They’re uncomfortable, I can tell what they’re thinking. They’re like, ‘cut, man, cut.’ I don’t want to be seeing that when I’m watching the show. They’re not invested in this last 30 seconds of this shot or whatever. So I’m excited to get to be part of the visual language of setting something up [and overseeing] its storytelling, and that’ll be fun.”

Until then, momentum is firmly behind the star. And with two chances to bag a long-awaited Emmy at next month’s ceremony, Arquette looks certain a sought-after star in TV and film for years to come.

tagged in: Escape from Dannemora, Patricia Arquette, The Act