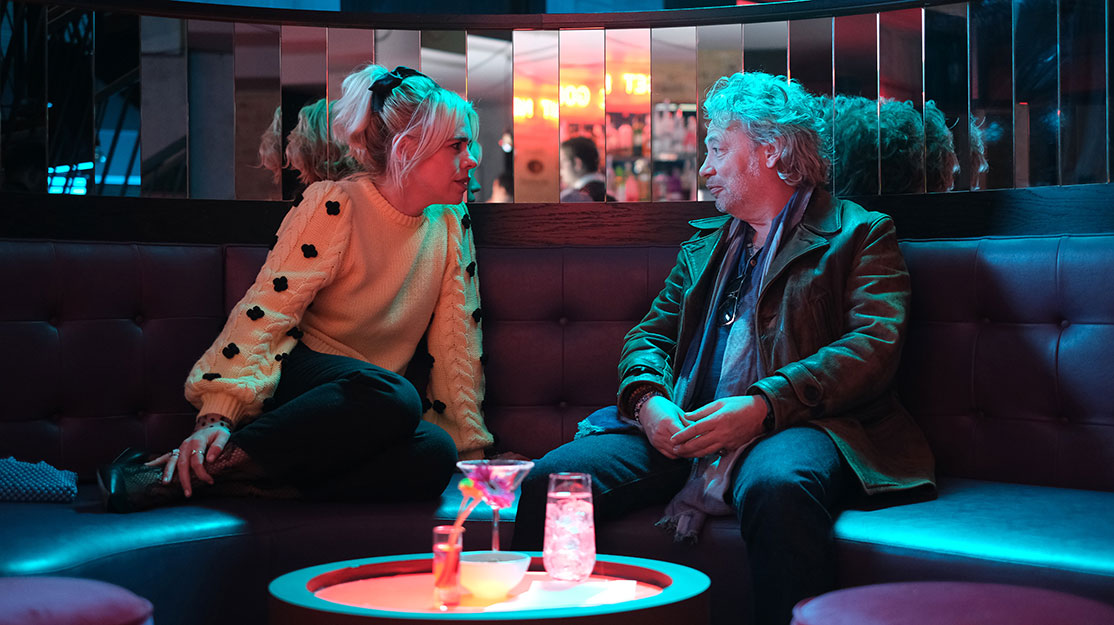 Intimacy coordinator Vanessa Coffey discusses her role working on television series and how it has changed during the Covid-19 pandemic.

Formerly a corporate lawyer, Vanessa Coffey is an intimacy coordinator with experience working in television, film and theatre.

Originally from Sydney and now living in Glasgow, her small-screen work includes Sky drama I Hate Suzie (pictured above), season two of War of the Worlds for Fox Networks Group and France’s Canal+, and Netflix series Fate: The Winx Saga.

Most recently, she contributed to the Directors UK guidelines titled Intimacy in the Time of Covid-19, a pandemic-focused update to the previously published Directing Nudity & Simulated Sex guidelines for directing intimate scenes. The advice aims to help directors create a safe working environment and offers a framework within which to create impactful and high-quality work.

How have new rules brought in during the pandemic affected your work?
It’s been really interesting that intimacy coordinators have been consulted on a lot of the guidance that’s been going out internationally. We’ve seen that from the Australian guidance, Nordic guidance and obviously here from Directors UK as well.
Producers have been looking a lot at that side of things, but they also recognise that part of an intimacy coordinator’s role is essentially about health and safety. I was consulted as part of that Directors UK guidance to think about how we can keep the performers safe but still get the content we need in terms of intimacy.

How has your work changed from what it was like pre-Covid?
A lot more preparation goes into the scenes, so we’re getting advance notice of scenes coming through. Where we might previously have had a fairly short lead time in the run-up to intimate content, now people are really starting to think about when it should be shot and the kind of preparation that needs to be done.
We’re seeing some scheduling changes, but also some really clear storyboarding and a lot of thought going into how we’re going to keep people safe, whether that’s through using lifelike dummies, actors’ real-life partners, or actors who can bubble before doing intimate scenes.

Are you seeing a reduction in the number of scenes that require that kind of intimacy because they’re potentially difficult to produce?
That’s definitely the way some productions have gone. I remember reading an article very early on about [Australian soap] Neighbours, for example, when they were doing cutaways with cameras so any time two actors looked like they were getting close in terms of proximity, you would then have the camera cut away to something else. So there was a hint of what was happening without actually showing it.
When [showing intimacy] is crucial to the storytelling, productions are trying to make the filming work as best as possible. In those cases, the scene might just be pushed to later in the schedule, so we can still shoot it but we’re going to shoot everything else first.

As production crews have been reduced, are you still able to be on set?
When I’ve had to go on set, I’ve been there in person. I did a consultation via phone, just talking through the methods and angles that person might want to use. But aside from that, it’s about being there in person, absolutely, because you want to make sure somebody knows you’re a presence they can rely on, who is usually in the same space with them.
If, for example, we need to call ‘cut’ for any reason or if something’s not working, I’ve got the ear of the director in that moment and we can discuss what needs to be done on the next take. It is essential the intimacy coordinator is in the same space as the director and the actors. Obviously, you have to wear a mask; you might have to wear a visor as well, but you are on the same monitor as the director, ideally.

The role of the intimacy coordinator is a relatively new thing. How did you come to become involved in TV production?
It is a very new role and obviously we saw the rise of that following the #MeToo movement and everything that was happening with Harvey Weinstein in 2017. As a result, people started to think about what was needed to protect actors and productions from nefarious activities.
My background is as a corporate lawyer. I retrained as an actor and I was also trained in dance so I had these three things that didn’t really seem to relate to one another. Then suddenly this lightbulb moment came about when I was approached by an actor who said to me, ‘I’d really like your help looking at a contract. There’s a nudity rider here. I’d like you to have a look at it with me.’ We went through it and that person then said, ‘Actually, I’d really like you to come on set with me. Would that be OK? Because I’d like to make sure the production is adhering to what we’ve just spoken about there.’
I went on set with her not realising this was actually a role. It didn’t have a name to me at that point. It was just support I was providing for that actor. That was the start of things, and now the role is gaining more prominence, just as a result of it being seen as something necessary rather than just something desirable.

Are you noticing a shift in the way scenes are written and the way they’re handled on set?
You get the script a lot earlier, and the earlier you get the script, the earlier you can be involved in conversations around what’s going to happen with the script. As with any other head of department, you can be involved at a really early stage and start to shape the way it’s going to be shot.
You’ve also got a more senior woman behind the scenes. There has been a shift in that, definitely. [In the] early stages, it was much more about coming in on the day of [filming the specific scene]. We might have got a few days’ notice, but it wasn’t much. That has absolutely shifted, and hopefully it will continue to develop so that we are involved from the very early stages and can really start to plan and help with the storytelling, because the narrative is so crucial with intimate storytelling.
We ask actors to think about how they walk, how they move as a particular character, how they speak. But we don’t ever really talk to them about their intimate lives – and that is such a huge part of what we do as humans. Those conversations can happen really early. And when they do, it can help influence character choices.

As we move into 2021 and this way of producing becomes more commonplace, how do you see it evolving?
With the Directors UK guidance, there are all sorts of things that are explored, from writing techniques to filming techniques. If we do get a vaccine [for Covid-19], people are still going to be thinking about how these scenes are written, why they’re there, and what the narrative is. Why is this particular moment crucial? Hopefully that will all be built in, so people like me can come in earlier to consult.

From a creative perspective, what are the main dos and don’ts of an intimate scene and what pitfalls do you see often?
It’s a mistake if people go in with a particular choreography in mind, and I say that as somebody who probably did that [in the past]. You have to be totally open to working with the people you’ve got in front of you and what they’re bringing to the role. That takes a little while to get used to.
You also have to think about positioning. You get very used to talking with the director about whether something should be shot in wide or close-up and what the different nudity levels are going to be for each of those kinds of shots.
The biggest pitfall I can think of is not having the conversation, not communicating about what’s necessary. I’m talking about blow-by-blow accounts of how long we’re holding a kiss, how many beats we’re holding a kiss, how many thrusts there are, what the quality of the thrust is, whether somebody is penetrating someone else when they have the particular line they’re due to say – so really breaking it down and speaking very openly and frankly about precisely what is happening for those actors in that moment. That’s the kind of creative thing you have to work with.

What would you say are some of the best examples of intimate scenes?
Normal People was a really good example. Every episode was beautiful, it was just really rich. I really liked Brave New World for the way the intimate scenes were managed on that show. It was gorgeous. You could tell the actors felt very safe. There was a lot of creativity.
I May Destroy You was also really gorgeous with what it was able to achieve. I think [creator and star] Michaela Coel is an incredible performer and writer. There was a real depth to that work and it was very dangerous to explore exactly what we’re talking about, which is consent.