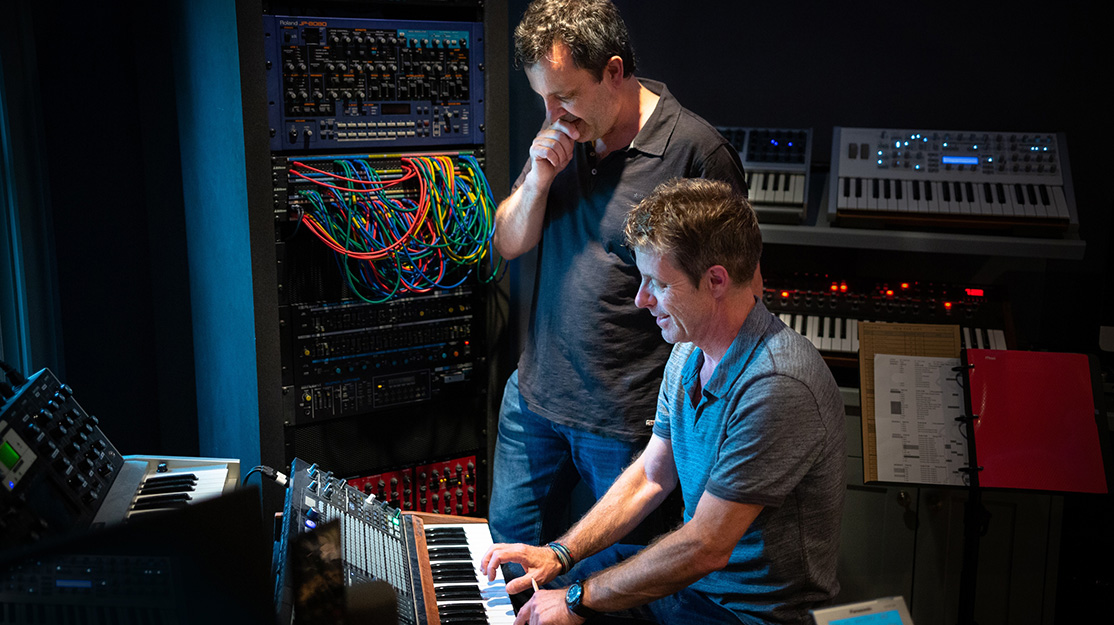 Composer brothers Rupert and Harry Gregson-Williams discuss their work together on HBO period drama The Gilded Age and reveal how they sought a modern sound for a story set in 1880s New York.

Over the past 30 years, brothers Rupert and Harry Gregson-Williams have established themselves among the most sought-after screen composers working on both sides of the Atlantic. While Rupert has scored Wonder Woman, Aquaman, The Alienist and The Crown, Harry has worked on Shrek, House of Gucci, Team America: World Police and The Martian.

However, they had only ever worked together on one project – George Clooney’s TV drama Catch-22 – until their recent team-up for HBO’s long-gestating period drama The Gilded Age.

Created by Downton Abbey’s Julian Fellowes, the series is set against the backdrop of 1880s New York, a time of immense economic change, as young Marian Brook (Louisa Jacobson) moves from rural Pennsylvania to the city after the death of her father to live with her ‘old money’ aunts Agnes van Rhijn (Christine Baranski) and Ada Brook (Cynthia Nixon).

“Rupert’s done a bit more TV than me so is a bit more experienced at that end, but it’s been really good – and, he tells me, very unusual,” Harry says of working on the series. “From the get-go, the filmmakers said we would be allowed to have a decent-sized orchestra for every episode and record 35 to 40 minutes of music per episode – and there are 10 episodes. It’s kind of like 10 mini feature films. That’s a lot of music.

“HBO put a lot of effort behind that and trust in us to do that, because many TV shows will cut corners. We were fortunate with them, and particularly the showrunner Michael Engler. He’s brilliant with music and was into the process with Rupert and me.”

“There was a lot of trust with Michael,” Rupert agrees. “We spent a lot of time with him stirring the pot and finding the sound and the themes. Once we were settled on the direction we were going in, he was very trusting. He was really supportive.”

Whether it is for an action thriller like The Equalizer (Harry) or a TV comedy such as Veep (Rupert), both the Gregson-Williams brothers like to use music as an additional storytelling device. Working on a Julian Fellowes production then gave them a multi-layered platform on which to build, from The Gilded Age’s numerous characters to the interconnected plots and its period setting.

“The first port of call for Rupert and me was to really find the sonic world of it, and clearly that wasn’t going to be a million miles away from the sort of thing you’d expect in the 1880s,” Harry explains. “But we were able to tweak it slightly, turn the dial a little bit one way and say, ‘OK, the sound of the orchestra is going to be the heart and soul of this thing, but why don’t we add something else to it that’s a little more unexpected?’

“Michael Engler was well into that. Without being too ostentatious, without it coming out and banging you on the head, we were able to just add some colours to what you’d expect from that period, and there lay the challenge.”

Naturally, the pair grew up making music together, though their paths have taken them to different sides of the Atlantic. Rupert now spends most of his time in the UK, while Harry is based in LA. But the distance hasn’t stopped them working together.

“Rupert spends a lot of time in LA so we’re able to get together, write themes and be in the same room,” Harry says. “Then I’ve done many scores over the years – from Bridget Jones: The Edge of Reason to the The Chronicles of Narnia: Prince Caspian – over the internet, where the filmmakers haven’t been in town for whatever reason, and we all know the difficulty of not being in the same room in the last year. But actually, it hasn’t messed us about too much at all.

“Rupert and I managed to get together and solidify what we wanted to do before we set sail, and then it was a case of using the internet. I’m in LA but I may as well be in Timbuktu because the filmmakers are in New York; they’re not even on the same coast. So Rupert and me being on different continents hasn’t been an issue at all.”

Having worked on Catch-22 together, the musicians have developed an unspoken understanding together where they are able to openly comment on or constructively criticise each other’s work. But with The Gilded Age, the sheer amount of music they had to produce meant they relied on each other to share the workload.

“It’s not four or five episodes, it’s 10 one-hours,” Harry notes. “It’s quite dependent on music, there’s quite a lot of it. [The music for] each episode had to not only be written and approved, but also orchestrated and recorded with an orchestra and mixed. In some episodes, there are possibly 40 minutes of music – that’s 400 minutes overall. That’s a lot of music over quite a short period of time.”

They hadn’t originally planned to work together, however, and had in fact pitched for the project separately before they discovered the other had also gone for it. “Rupert was the competition for a while,” Harry jokes.

But their motivations were the same: a fascination with the period depicted in the show and the rise of New York society. Harry was also impressed by the “marvellous” cast and was keen to explore the musical possibilities afforded by the diverse group of characters that populate the show.

Very early on, conversations with Fellowes and Engler revealed an ambition on their part to use music as one of their storytelling tools, rather than have it sitting in the background.

“They were very clear; they know the power of music,” Harry says. “By the time Rupert and I came to it, they were pretty clear where they wanted to have music. There was quite a lot of clarity, we just had to find the key to the castle, and that’s what took up most of our time to begin with before we started writing individual cues.

“Writing the theme for the main title was also fun. Loads of shows use a song for the main theme title. We don’t get to do that. It’s two minutes, so it’s a proper main title. That was really rewarding and quite surprising; it was an added extra.”

The pair were also able to see early cuts of The Gilded Age, with rough assemblies of all 10 episodes in place when they joined the project. They then spent several months writing and recording everything they would need for the series. The fact they worked on episodes in chronological order also meant they could evolve the music with the twists and turns of the character plots, while they also designed themes for the show’s two main families, another for its love story and then additional melodies for characters who pop up during the season.

“We came up with the melodies pretty quickly and that was quite pleasing. Then we came together to do the main title,” Harry says. “The thing that gave us the biggest challenge was finding the key to the instrumentation to the show that would add flavour and colour to proceedings. They needn’t have been instruments that were appropriate for the 1880s. It could have been anything – a bagpipe as far as anybody was concerned. We just had to find that colour, and that took us a while.”

They later chose to use instruments such as ukuleles, a hammered dulcimer and a Finnish stringed instrument called a kantele. “There was no real restriction as to what colours we could attempt to use,” Harry continues. “The filmmakers were really quick to get back to us. If we used various things and auditioned them between us, and narrowed things down to a place where we felt pretty good to be able to share it with Michael, in general it would make him sit bolt upright and say, ‘I really like this, let’s pursue that.’ It was a very good collaboration.”

While the essence of writing and recording music may not have changed much over the course of their careers, the brothers do point to technological advancements that have allowed them to collaborate thousands of miles apart. The most important change, Harry says, has been the ability to mock up previews that sound like full orchestras.

“[Legendary film composer] John Williams probably sits at the piano with Steven Spielberg and plays something and says, ‘That’ll be French horns, and there’ll be some strings there. And maybe I’ll put a ukulele in that,’ and he’s going to be trusted that’s what’s going to happen,” he explains. “But for the rest of us mortals, you’ve got to demo that up and make the filmmaker feel really close to how the music is going to be before he feels comfortable enough to sign off on it.

“That’s a massive thing that’s changed, that we are able to mock up the sound of a symphony orchestra so that the filmmaker doesn’t have to hear us at the piano saying, ‘Yeah, this will be violas and then the clarinet will come in here’ and they have to imagine what that’s like. Now you can play him something that sounds very much like it. Other than that, I don’t think anything’s changed.”

But Rupert and Harry are also both good examples of how the nature of the television business has changed the way screen composers now work.

“Last year, Harry did two or three movie scores and a couple of TV scores. Ten or 20 years ago, there was a TV composer and a feature film composer and there wasn’t a lot of getting together,” Rupert says. “Now, with streaming, if you’re working for Netflix, you could be doing two TV series and a movie, but it doesn’t feel different. The Gilded Age is like three or four epic movies with the amount of music we had to write.”