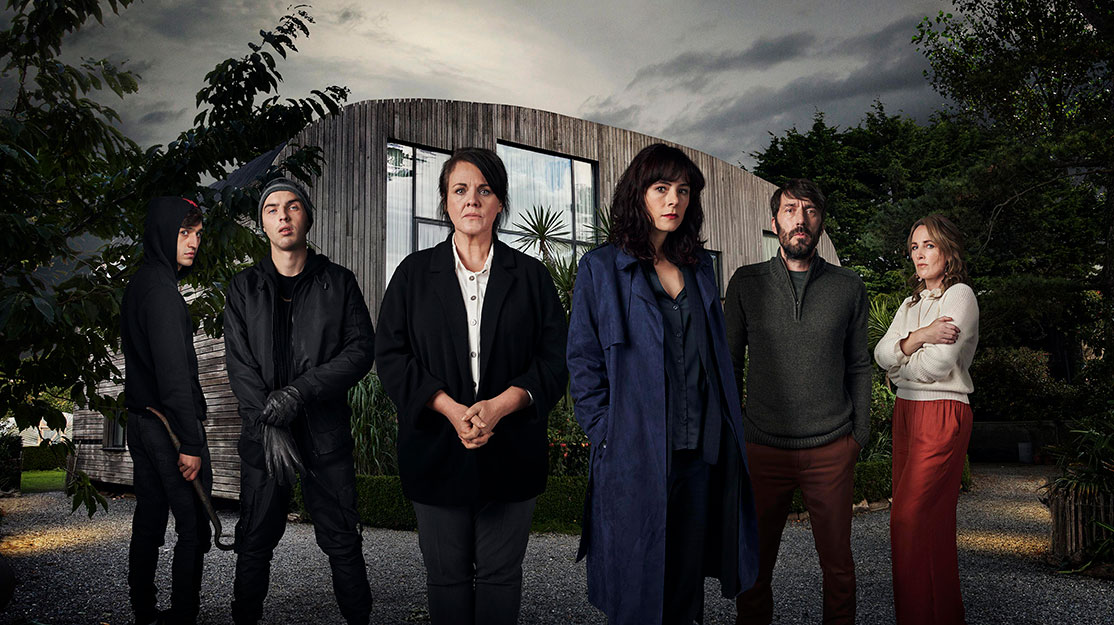 Actors Elaine Cassidy, Tom Meeten and Sally Lindsay look back on their experience filming Channel 5 thriller Intruder, in which a couple’s idyllic life is sent spiralling after they become victims of a break-in.

With series such as Cold Call, The Drowning and Penance, UK broadcaster Channel 5 has built a reputation for tense, gripping and highly emotive thrillers. Its latest drama, Intruder, continues in the same vein as it asks viewers what they would do if they were confronted by burglars in their own home.

Elaine Cassidy (No Offence), Tom Meeten (The Ghoul), Helen Behan (The Virtues) and Sally Lindsay (Cold Call) star in the drama, which begins on Monday and airs across four consecutive nights. It is produced by Clapperboard Studios and distributed by ITV Studios.

On the surface, Rebecca and Sam are a happily married couple, hosting a lavish dinner party for their friends with plenty of alcohol – and the suggestion of drugs too. Their relationship takes a dramatic twist, however, when Sam discovers Syed and Tommy inside their home and his actions lead to devastating consequences for everyone involved.

“What I find really interesting about Rebecca is, when you first meet her, you think you’ve got her down and you think you know who she is, but as the story progressed, I was gripped because this can happen to anyone,” says Cassidy, who plays one half of the central couple. “I thought I knew who Rebecca was and, if I’m really honest, I was like, ‘What’s there to really get my teeth sunk into?’ But as the story progresses and she goes on the journey along with everyone, new colours and qualities start to come out. That’s what really intrigues me about her, because there’s a lot in her that you don’t initially see.

“When you meet her, she’s married, she’s got a job. Her life is solid. She’s very practical. She’s got everything in its place and life is great. It’s a great place to start because then you  see things start to crumble and disintegrate.”

Sam, meanwhile, appears to live a showbiz lifestyle, hosting a talk radio programme and generally enjoying his lot. “Maybe he’s a righteous prick,” says Meeten, who plays him. “I don’t know if he’s likeable in those first stages. I tried to make him likeable. And, of course, we have this incident that exposes him and reveals this latent nasty streak within him.

“This horrific incident is utterly his fault and he’s driven by an impotency somehow. That’s where he unravels as a character. You get to see quite quickly that he doesn’t really have any strengths and he’s governed by selfish survival. He drags his wife very easily into the whole evil intent of the cover-up, so he is the architect of their downfall and he obviously suffers the worst from all of that.”

It was Sam’s moral ambiguity that drew Meeten to the role of a flawed, “slightly posh berk” who is capable of something horrific. “You think he might be an alpha male, but he quickly descends into gamma and he’s got no idea what he’s doing,” the actor notes. “He’s in quicksand and the more he struggles, the more he sinks. The ladies are much more competent and together people than he is.”

Perhaps the most competent character in the series is Bailey, the FLO assigned to the couple following the break-in, acting as a link between them, the police investigation and Syed’s family. Her detective instincts quickly rise to the surface when she believes there might be more to the events than Rebecca and Sam’s testimony.

Former Coronation Street star Lindsay drew on the real experiences of social workers in her family to step into the role. “She comes in and has a sixth sense that something is not as it seems just because of their body language and the tension, something the normal coppers probably wouldn’t have noticed,” the actor says. “Then it’s almost like she can’t let it go. It’s an itch she can’t stop scratching, basically. Even though she keeps being told, ’It’s not your job. Sit down. Shut up,’ she gets stronger in her own convictions. I just thought she was really interesting in how she started on the bottom rung of the police echelons and then she works it out, essentially. I thought it was brilliant. It’s proper Columbo.”

The new series also provided a chance for Meeten to work again with Tunley, the pair having previously partnered on 2016 feature The Ghoul.

“On the set, he had a phrase he kept using where he was like, ‘I don’t know who wrote this rubbish,’” Meeten says of Tunley. “He liked the idea of imagining somebody else had written it and taking it fresh because, when you’re filming, things change all the time. I love working with Gareth. He’s absolutely brilliant. We’re also developing another feature so hopefully we will work again in the future too.”

Cassidy picks up: “The benefit of him being the writer-director, which you tend to get more in film but not in TV, is we did feel like we were doing a four-hour film. There’s just more depth. Sometimes in TV, when you do blocks, you have the director come in and do two or three episodes. That continuity really helped establish a rhythm. It has to show on screen as well that that energy has continued throughout. It made it a really pleasant process and experience because it was an overall arc with no changes. He’s just so smart and his voice in storytelling is really refreshing. It’s something quite new that I’ve not really seen before on TV. It’s more film noir, but we haven’t seen a lot of that. This feels new and fresh.”

Cassidy and Meeten began the shoot, which took place last year on location in the west of Ireland, with two weeks of scenes set inside the eye-catching central house – although as is typical of a television schedule, scenes were recorded out of sequence, which meant they didn’t start with the pivotal break-in.

“Being in the house for those first two weeks really helped me, so when you went outside, there was a strong foundation knowing where you come from or where the character is at that particular moment,” Cassidy says. “Regardless of what scene you begin with, every single scene informs you along the way. It was a good bonding experience to know what Rebecca and Sam’s relationship really was.”

“The actual inciting moment within the house was quite a big set piece, which is why they delayed it – we had stunt training and I had to grapple with Syed [played by Soony Poon Tip]. It was quite a complex thing to do,” Meeten says. “The other point is that, apart from at the very end, all of Sam and Rebecca’s scenes are in the house, so we see the breakdown of their relationship from it sort of being OK at the start to crumbling and Sam becoming more and more pathetic and moving from the bedroom to the sofa and slowly collapsing as a human.”

Filming during the pandemic brought additional challenges. The cast had to isolate for two weeks in preparation for the six-week shoot, which was overseen by a Covid supervisor. Rehearsals started on Zoom, and once they were together in a room, the actors still had to maintain social distancing and wear masks.

“It was weird,” says Lindsay, who came onto set after filming had begun. “The cast were established when I came in and I didn’t see anyone’s face before the first take. I took my mask off and we did the scene and I was like, ‘Oh, that’s what you look like.’ It was different. It was testing. When we got to know each other, it was better. I didn’t do a lot of scenes with Tom and Elaine but we just had to get a rhythm really quickly. It was interesting.”

Coming away from rehearsals, Cassidy admits she felt as though the actors weren’t clicking together as they should have, a side effect of wearing masks and not being able to respond in full to each other. Then on set, “you’re doing the rehearsal with your mask on until they say ‘turn over’ and the mask comes off,” she says. “That’s when you see for the first time what the other person’s going to do.

“It felt like slowly walking into the water and finally getting to swim. None of us had ever experienced that before. I’m always grateful to be working in jobs that I really want to do, but working during a pandemic was the ultimate. I didn’t know how I’d respond because I take it [Covid restrictions] very seriously, and it was just heaven. You’re only as strong as your weakest link, and every single person on that set was responsible. We were all so grateful to be working. It was a special team.”