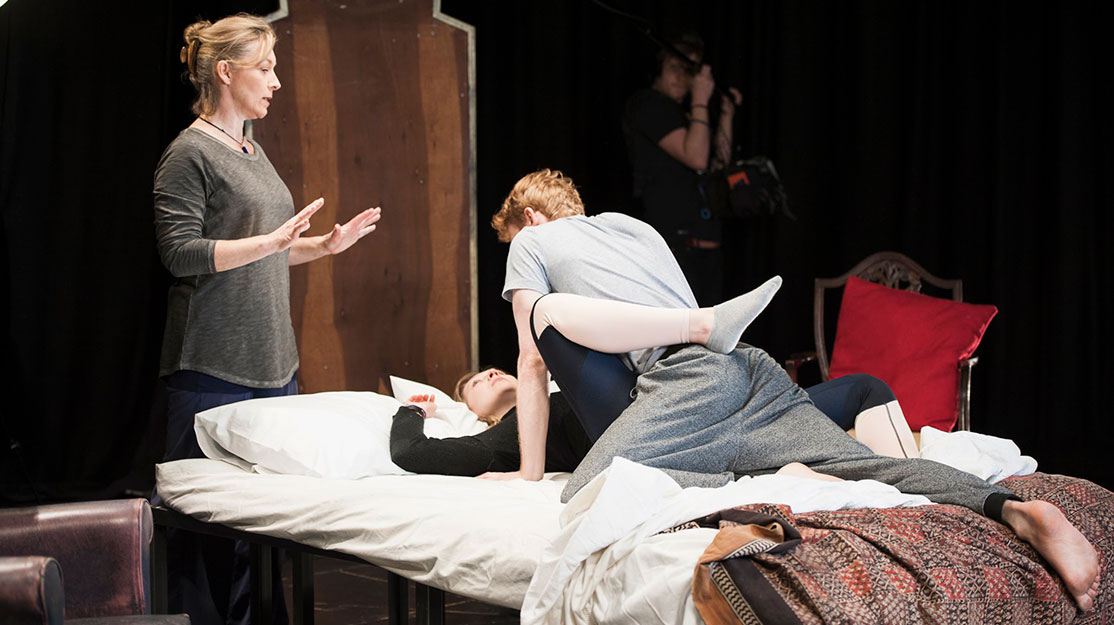 Having worked on series including Sex Education, Gentleman Jack and Normal People, intimacy coordinator Ita O’Brien explains why television’s approach to sex scenes has to change.

It’s impossible to imagine a sword fight or a battle scene being filmed without actors spending many hours choreographing and rehearsing the action in detail beforehand. Similarly, a dance routine would also be the subject of meticulous planning before being recorded.

So, why is the way sex scenes are filmed only now coming under greater scrutiny? For the past few years, intimacy coordinator Ita O’Brien (pictured top on set) has spearheaded a shift in the industry and led a new approach to intimacy on screen, one that invites greater communication and transparency during filming, puts in place a structure that allows for agreement and consent between actors and directors and that allows time for intimate scenes to be choreographed clearly.

“In the past, there wasn’t a sense of bringing a professional structure to the intimate work,” she explains, speaking during a keynote session at the Berlinale Series Market in February. “If you had a fight, you certainly wouldn’t just say, ‘Okay, we’ll hand you the swords and then just go for it.’ That wouldn’t be reasonable as you’re in severe danger of an injury happening. So you make sure a stunt coordinator or a fight director is there; they teach techniques and they choreograph the fight content. They will have spoken to the director and made sure they’re serving the director’s vision. If there’s a dance, of course, you’re not going to just talk about it and then throw the people on and say, ‘Right, just do the tango.’ You’re going to have a choreographer, who’s going to listen to the director, hear their vision, choreograph clearly and then make sure you create a scene that serves the storytelling.”

It’s that approach that O’Brien is now bringing to intimate content, having worked on series such as Sex Education, Normal People, Gangs of London, Bulletproof, Pennyworth, Gentleman Jack and Watchmen.

“I’m making sure I’m listening to those concerns, sharing that with the production and making sure everything’s put in place to make that actor feel autonomous and powered, and really happy to be serving that director’s vision,” she explains. “I’ll then go and connect with the wardrobe department, speaking to them about what genitalia coverings, modesty garments or other coverings need to be put in place. Then, if I haven’t already worked on set, I’ll speak to the first AD [assistant director], making sure that we’re collaborating and running a closed set with the best practice possible.

“When we come to the day on set, we rehearse the scene really clearly. I’ll have spoken to the second AD, making sure there’s time and space for that rehearsal. And that’s a shift in the industry as well. When I started, my first two programmes were Sex Education and Gentleman Jack. People said to me, ‘Oh, you’ll never have time for rehearsal.’ But of course, you’d never say that about a fight or a dance. So it’s the same now for intimate content; you make time to rehearse.”

Providing time for rehearsals means greater efficiency on set as the scenes then become repeatable and the actors are more comfortable with what they’re doing, which means “they can make a way better sex scene because they’re really happy with what the content is going to be, so they can act their socks off,” O’Brien says, adding that she also ensures actors are happy after filming has taken place, offering several points through the process where they can see their work before the rest of the world does.

“It’s about creating a scene that honours the director’s vision, honours the writing and allows the actors to be empowered and happy with the work that they have done.”

O’Brien’s work, through her company Intimacy on Set, is now spreading across Europe, having shared her guidelines in Germany, Sweden, Norway and France. And across the board, it’s change that is desperately needed.

Asked whether she has worked with an intimacy coordinator before, Swedish star Sofia Helin (The Bridge, Atlantic Crossing) responds: “Never. I can’t think about it. I can’t deal with it. It’s tense every time you have to cross your own borders in order to satisfy the director’s needs. So I haven’t dealt with it. It has been a part of my job that I don’t like, and with Ita’s technique, it could be a part of my job that I like. But the interesting thing is that when I’ve done scenes with a character who is in charge of her sexuality, then it’s never been horrible. But the other way around, it’s always horrible, and that’s more usual.”

Helin says on shows she has worked on, there has always been a very “concrete and direct” vision about how intimate scenes would be portrayed, leading to the moment where the actors are on set, the clock is ticking and the actor’s voice has been taken away. “What we as actors want to do is to tell the story, and we can almost do anything to tell the story,” she says, “especially when the team is there and the camera is on. You say ‘yes’ to almost anything just to serve the story. So that ‘no’ has to be listened to by someone [like O’Brien] who can step in and say, ‘No, no. We don’t do that.’”

Likewise, director Soleen Yusef (Skylines, Deutschland 89) has never worked with intimacy guidelines in Germany, having planned her own guidelines up to this point. “I would feel more safe if I could handle it in a way that’s much more professional, because for me, I just improvise,” she says.

“We’re not just talking about intimacy that is very sweet. We’re talking about love and sexuality. I had to do a sexual assault, for example. They weren’t naked. But still, it was very difficult for me to do that. I always meet with the actors before and I ask different questions. How far do you want to go? What do you want to wear? Do you want to be completely naked? You need to be prepared. We also had a completely closed set. You have to just create an atmosphere for everybody who’s doing the scene to feel comfortable. For me as the director, I don’t want to go too far. I don’t want to hurt people.”

O’Brien says her work introduces a process of agreement and consent between actors, directors and others involved in the scene. A key principle is ensuring the actors are present in their mind and body so they can lay down boundaries they feel comfortable with and confident any concerns will be listened to.

“Very often you hear actors go, ‘In order to get through the sex scene I downed a bottle the vodka.’ When I was in Australia and New Zealand, I had several people from different places telling me that another practice is that the production will offer the actors valium in order to get through the sex scene, which is doing the absolute opposite of what we want,” she reveals. “We want them to be ultra present, so they can really be saying yes to what they’re happy with, to be autonomous, to not feel they’re being pushed past their own boundaries.

“That’s a shift in the industry. Before now, an actor who said no might have felt they were going to be considered a troublemaker, a pain in the ass, a diva and possibly wouldn’t get employed again.”

Often in sex scenes, actors are judged to have no chemistry with each other if the audience can sense a feeling of tension or awkwardness on screen. O’Brien believes audiences are left squirming in their seats when they can feel the actors are uncomfortable with what they are being asked to do. Her work now aims to ensure the actors are happy and in control, meaning audiences will remain engaged with the scene and the storytelling. She refers to an example in season one of Netflix drama Sex Education, where a fight between two male characters ends with them having oral sex and both actors had concerns about being asked to spit on the other person, whether for real or using a substitute substance.

“We’re creative people so it was about, ‘Where are we going to put the camera?’ Very quickly, we had one actor there, a camera there and a substance made up by the make-up department was spat on to a piece of paper by one actor. The other actor was filmed responding to receiving the spit and then you’re away,” she explains. “The director of the first block didn’t even know they hadn’t spat on to each other. So it’s trusting that to know that we can use body parts and we can be creative with where the camera is in order to tell the story while keeping the actors safe.”

Through her company, O’Brien is training up new intimacy coordinators through a series of programmes to ensure preparation for sex scenes is taken as seriously as a fight or a dance sequence. She is also keen to ensure training can be provided by people of all genders, sex and ethnicities.

“My intention is that whoever is acting feels like they’re represented,” she concludes. “If they have a request, I can help to honour that, so the person performing feels as safe and careful as possible.”