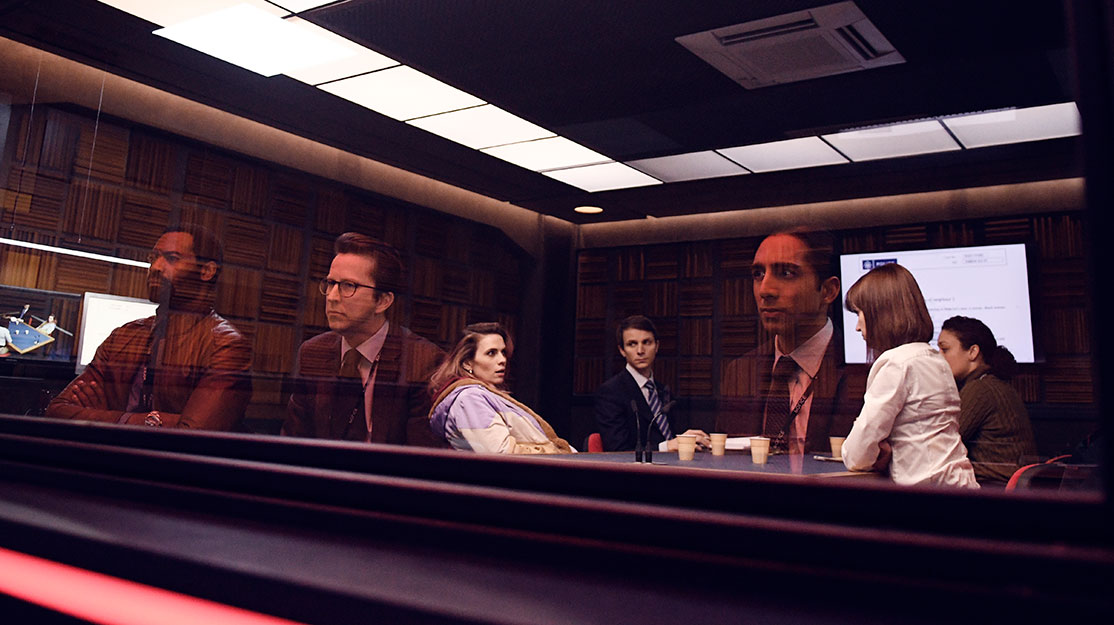 The stakes are high in Netflix’s international cat-and-mouse crime drama Criminal, with each episode comprising a single police interview. DQ interrogates the cast and creative team about the series.

If there’s a single series that demonstrates the scale of Netflix’s global ambitions, it might just be Criminal.

The crime drama has a unique premise in that each 45-minute episode takes place entirely during a police interrogation, focusing on the intense clash between detective and suspect, while the cameras are confined to the interview room, the adjoining observation room and the corridor that links them.

But what really makes the series stand out is that this 12-part procedural is set in four European countries, with three episodes each from the UK, France, Germany and Spain. Each batch is recorded in the local language, starring, written and directed by talent from the same country.

Produced by Idiotlamp Productions and launching on September 20, Criminal is overseen by British showrunners George Kay and Jim Field Smith, who wrote and directed the UK episodes, respectively, while also supervising the other countries’ creative teams.

Kay developed the concept after enjoying the constraints of writing a monologue called Double Lesson for Channel 4’s First Cut strand, while also taking inspiration from an interview he watched with a man accused of killing his stepdaughter.

“During the interview, I changed my mind [about whether he was guilty] about three or four times,” he recalls. “Jim and I have worked together since school and we’ve always loved police stuff, true crime and crime drama, and then the show kind of built out of that.”

Kay then wrote an initial script, but the premise – which goes against the grain by being extremely intimate rather than high-concept or lavish – meant it was tricky to find a home for the show. That’s where Netflix came in, with the streamer taking the potential scale of the show in a different direction by turning it into an international format.

“Initially, we were trepidatious,” Field Smith admits. “But it’s been the most amazing adventure.”

Although the project has been five years in the making, production moved at an incredible pace once Netflix came on board. Shooting began in January and wrapped in April, with each episode filmed over a week in the same studio set at the streamer’s production hub at Ciudad de la Tele, Madrid.

“We shot 12 hours of drama in four months,” Field Smith says. “That’s never happened ever, anywhere. So we went from this long period of trying to get the thing away to suddenly all guns blazing.”

Serving as a “pilot block” for the whole series, the English episodes were filmed first, featuring a core cast that includes Katherine Kelly, Lee Ingleby, Nicholas Pinnock, Mark Stanley, Rochenda Sandall and Shubham Saraf. Guest stars appearing in single episodes include David Tennant, Hayley Atwell, Youssef Kerkour and Clare-Hope Ashitey. Kay wrote all three of the English instalments, with Field Smith behind the camera, each working with the heads of departments to create the world of the show.

That then became the model for the German, French and Spanish versions that would follow, each inheriting the rules, style and tone set out by the original.

The lure of Netflix and the short-term commitment of a limited series meant the project was able to snare some of each country’s top acting talent, such as Nathalie Baye from France, Germany’s Peter Kurth and Inma Cuesta and Emma Suárez from Spain, in addition to the aforementioned British talent.

“It’s almost like a sort of theatrical engagement,” Field Smith says. “How many opportunities do you get as actors, writers and directors to do a show where it’s entirely about the performance? Yes, there are all these ‘constraints,’ but those constraints are there to be embraced and, actually, actively encouraged. So we were able to say to David Tennant, for example, it’s essentially more of a theatrical play experience than it is a big drama where you might be shooting two or three days across several weeks and there’s a lot of sitting around and a lot of waiting. We told them, ‘We’re going to be shooting 12 pages a day, so you better come prepared.’”

It was during the scriptwriting process that Kay and Field Smith began discussing the rules for the world that would become integral to the dynamics between the characters, their behaviour and the way the series would later be filmed.

They made an early decision that the corridor between the observation and interview rooms would be a safe space where characters could tell the truth. “So after being in this ‘theatre,’ they come out the door and would be able to say, ‘Oh, so and so’s getting on my nerves,’ or ‘I really think he did this.’ It’s just true feelings,” Kay says.

The use of CCTV footage or flashbacks and reconstructions was ruled out, while the duo were also keen to ensure the camera never left the set. “The strength of the show is that we are enclosed,” Field Smith notes. “One of the directors wanted to put the camera outside the window and see one of the detectives looking outside, but I said, ‘You can’t do it because you’ve immediately broken the rule of the space.’ So the rules emerged organically as we were making the show, rather than from us sitting down at the beginning with a list.”

Field Smith points to the second UK episode, in which Atwell plays a woman accused of murdering her sister’s boyfriend. The fact that there’s no physical evidence, crime scene photographs or any other visual aids pointing to her guilt, or otherwise, means viewers must rely on the conversation between the accused and the detective and work out themselves who is telling the truth.

“That’s when the shows is at its strongest,” the director continues. “If you’re doing a standard crime drama, the interview room scenes are often used to get as much information as possible so we can get back out on the road and have a car chase. We’re the opposite. Our car chase is in the room; our pyrotechnics come from physicality and body language and a pen simply falling off the table. We’ve both done big, flashy shows and films, and it was a really fun challenge to go the other way.”

With four variations of Criminal, Kay and Field Smith had to be wary of customs and procedures that might be different from the way things work in a UK police station. But when the show is boiled down, each episode follows the same structure – a suspect brought in for questioning by police about a crime they may or may not have committed – no matter what country it’s set in.

“That was the nub of it. So as soon as we can cut to that, finding the truth about that suspect, the grammar of it [across different countries] became pretty similar,” Kay says. “To labour on the on the differences between them was not something we wanted to do for any dramatic reason. So it all became quite a universal story.”

Field Smith picks up: “We didn’t want it to be super-real because that would, in itself, not be interesting. So we created this slightly theatrical, slightly heightened environment. On a script level, the show is technically very accurate; but on a visual level, we wanted to create our own space. We tried not to get too bogged down in what a police station in Germany would look like.”

UK actors Ingleby and Sandall are both aware of the dramatic tension police interview scenes can create, having both previously appeared in a series famed for its interrogations, BBC drama Line of Duty.

In Criminal, they play DI Tony Myerscough and DC Vanessa Warren, who each get the chance to put Tennant’s Dr Egdar Fallon and Atwell’s Stacey Doyle through the wringer in an attempt to get to the truth.

“I thought it was interesting how you don’t have any background. There are no flashbacks or preamble leading up to it – you get the information in that room,” Ingleby says. “And the writing, it’s very rare you get a scene that runs and runs – you get like two or three pages of the scene at the most. That was really thrilling for me.”

Filming in the interview room would take place in the morning, before the scene was reset to be shot from the perspective of those in the observation room.

“It’s very intense. That is the show,” says Sandall. “It’s in the third episode that you see Hugo Duffy [played by Mark Stanley] rehearsing what he’s going to do in the interview, so that feeling of immense pressure would be put on these characters because they are putting on a show. It added to the intensity of it.”

Owing to the nature of the format, the police investigations take centre stage, leaving little time for actors to develop their characters beyond their work persona. Even so, they have still managed to create power dynamics and even a hint at a romantic relationship between two officers.

“With Myerscough, I suppose he plays it by the book,” Ingleby says. “He’s very methodical compared to somebody like Paul Ottager [Pinnock], who throws the cat among the pigeons. He’s on fire in the room, but slightly less confident in his own skin.

“They’re a team and they work as a team. They have a routine. Some people, you know more about their personal life than others. But you have the work banter, which we thought was good to have going through it.”

The constraints of the series aren’t just limited to the set design or camera movements but the actors’ movements as well, with most of the sitting behind desks the majority of the time. “I do think there’s a real integrity in truth and stillness,” Sandall explains. “It’s a very brave choice to make but, as actors, obviously you’re paranoid, thinking, ‘Oh gosh, is this going to be interesting?’ But there’s a real truth in stillness. It’s a different format – it’s great.”

“I suppose at first, I thought, ‘How interesting can this be?’ But I enjoyed it,” Ingleby admits. “After the nerves of learning a massive amount of lines, you get into the rhythm. For that first week of filming, when it was Rochenda, Katherine and Hayley in the interview room, that was their world, this [observation room] was ours and then we’d swap it around for the next episode.”

Both actors are also excited by where Criminal could go beyond its first season, dreaming up new countries the show could be set in and even crossovers that could bring different countries into the same investigation.

“The ideas that could go beyond this season are huge. There is so much potential in the programme and crossovers,” Sandall adds.

With a format that carries inherent tension and the ambition to apply it to different countries, Criminal is a fascinating and thrilling exploration of the cat-and-mouse relationship between suspects and detectives, and one that Netflix has the capacity and resources to adapt across its global footprint in the years to come.