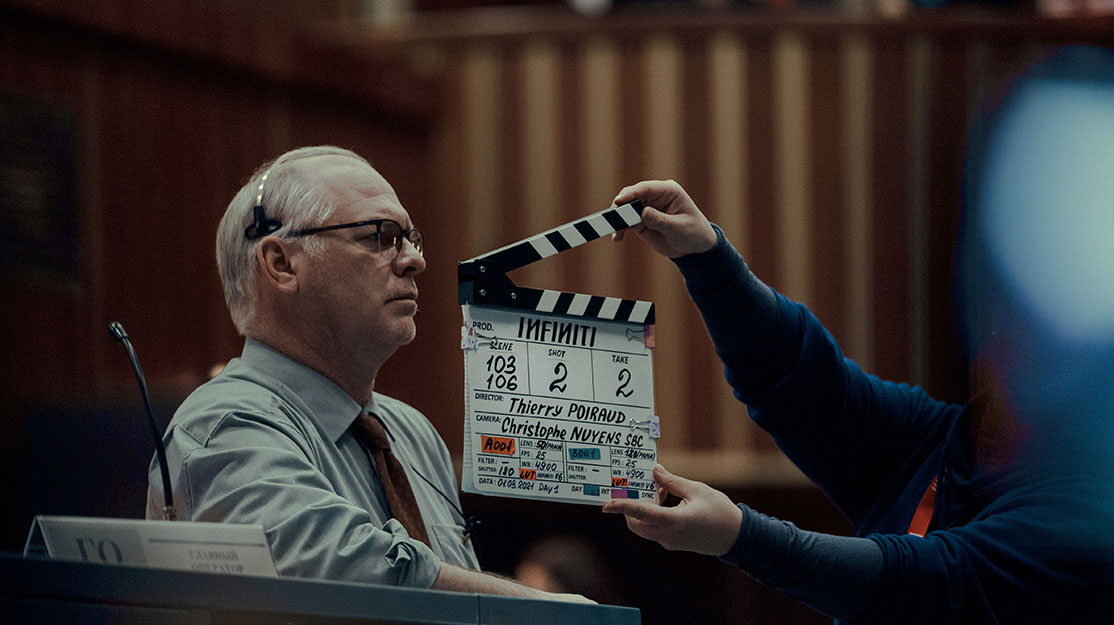 If one man is in space, orbiting Earth aboard the International Space Station (ISS), how could his corpse have been discovered on a rooftop in Kazakhstan? It’s an intriguing mystery that heralds the start to Infiniti, a series that blends multiple genres – science fiction, crime, romance and political thriller among them – while taking thematic and visual inspiration from the likes of Apocalypse Now, 2001: A Space Odyssey, Blade Runner 2049 and HBO drama Watchmen.

The story begins when the ISS goes silent after a cargo drop ends in disaster, leaving its crew in distress and the ground control team searching for a way to restart communication. Meanwhile, in Kazakhstan, local cop Isaak Turgun discovers the wax-covered, headless body that he later discovers belongs to an American astronaut, Anthony Kurz, who is currently in space aboard the ISS.

With French astronaut Anna Zarathi, who began an affair with Kurz six months earlier, convinced he is calling to her for help from the ISS, she devotes herself to rescuing Kurz and forms an unlikely partnership with Isaak to pursue an unofficial investigation. But how could Kurz be in two places at once?

Infiniti is based on a “very old idea we had seven years ago,” says Stéphane Pannetier, who wrote the series with Julien Vanlerenberghe. They wanted to write a story about space, but when they visited the European Space Agency in French Guiana, they were struck by the contrast between this huge, scientific facility that stood in close proximity to a community of people living a very simple, rural lifestyle.

“We were very intrigued by this contrast. There were a lot of people living in a very simple way just behind an international space centre. Because of this, we decided to blend two different characters – an astronaut and a cop – and two different genres, so there is a crime thriller story and a science-fiction story.”

“There was also something immediately visual,” producer Eric Laroche says about the show’s setting in Kazakhstan, home to the Baikonur spaceport, which adds to theme of contrasts running through the series. “Going into space is vertical and the Kazakh landscape is horizontal. Then we also have science and mysticism, faith and facts, the ancient world versus the new world, the story of the space conquest versus the private launchers. All these ideas were in the script from the beginning.”

Laroche met the writers through his connection to Poiraud, and they came to his office to pitch him the series.

Pannetier and Vanlerenberghe have been writing together for 10 years, mostly for French TV shows such as crime dramas Section de Recherches and Les Ombres Rouges. “But this is the first time we’ve done what we really wanted to write,” says Vanlerenberghe.

The idea for the series came to them on a visit to Guiana with French broadcaster Canal+, but they decided the show could be even better set in Baikonur as they imagined images of the space race between the US and USSR during the Cold War and the special aesthetic Kazakhstan could provide. Laroche then met them in 2017, which triggered two years of development before Canal+ boarded the project after commissioners were pitched a show described as True Detective in Kazakhstan, with a little bit of Christopher Nolan feature Interstellar.

During their research, the writers met real-life French astronauts Claudie Haidneré and Jean-François Clervoy and spoke to numerous space journalists.

“I remember before meeting the French astronauts, the scripts were already written. But the most important thing was to speak with people who lived this kind of crazy thing, because going to space is really something crazy,” Vanlerenberghe says. “As someone says in the show, ‘it’s like being in a giant tin can in the most hostile environment in the world.’

“The idea [of the show] was to find the human emotion behind this kind of person. They are really smart, they are in good shape, but you need to find the emotion and the reason why they do this, because it’s a dream for them to go to space. That’s what drives Anna in the series. But it’s not a dream like a child who wants to play cowboys and Indians. It’s an adventure of faith and science. As one character says, ‘You don’t go to space with faith, you go with numbers.’ You need faith in numbers.”

As befits a show set within the international space community, numerous languages are spoken throughout the series. The scripts were initially written in French, then translated into English and rewritten again in other languages that feature – a process that was supported by the multinational cast.

“We wanted to respect the languages in the story, so for the final versions – the shooting scripts with one scene in English, in French, in Kazakh or in Chinese – we had the help of different actors who helped us to go into details,” explains Laroche. “We say the devil is in the detail. The actors need to have these kinds of details to build the characters, and this is one of the most important things for the audience. If you don’t have that detail, you don’t make the characters human.”

“It was also part of our wish to do something realistic,” continues Pannetier. “That’s why it was really important we did a lot of research to make it sound real at the beginning to make it look like a classic crime story – because by the end, our wish was that it would be a science-fiction or fantasy series.”

It’s that blend of genres that marks Infiniti’s ambitions from the outset, as episode one seemingly tells two unrelated stories until the final act reveals the Kurz paradox. But while striving to meet the outer reaches of their imaginations, the writers also had to ensure the audience came along for the ride.

While Infiniti confronts issues of science and faith in the first episode, the paradox leads to a much more grounded story, the producer says. “In the beginning, there is Kurz who is supposed to be alive up there and dead down here. But after that, everything is quite normal. It’s about a cop investigating, he discovers the corpse is an astronaut and starts looking for an astronaut killer, while Anna believes she needs to go to space to find the truth.”

The writers’ intention was never to make a traditional science-fiction series or even a space drama as seen in recent series such as The Right Stuff and Away. Instead, Laroche describes Infiniti as “a journey” similar to that depicted in Joseph Conrad’s novel Heart of Darkness, which became Apocalypse Now when it was adapted for the big screen by director Francis Ford Coppola. Notably, the story sees Martin Sheen’s Captain Willard sent on a mission during the Vietnam War to confront a rogue US colonel called Kurtz.

“The most important thing was not to be too open to temptation and bring in the sci-fi elements too early, and therefore hide the characters and story behind the sci-fi,” Laroche says. “This is a story about characters; they all have reasons to do this investigation and find the truth.”

“There is a paradox at the beginning but, after that, everything has an explanation,” Pannetier adds. “After the first episode, we are not in science-fiction film, but it looks like that.”

Laroche understandably describes the task of filming in multiple languages and locations during a global pandemic – not to mention recreating space and zero-gravity aboard the ISS – as a “truly amazing and unbelievable challenge.” Empreinte Digitale and Federation Entertainment Belgique are the production companies behind the show.

Initially hoping they might be able to film on location in Baikonur, they were ultimately unable to do so. Instead, most of the interior scenes and the control centre were recreated in Ukraine, while the ISS was constructed as sets rather than filming actors in front of a green screen. The production then moved to Kazakstan to shoot the unique landscape and find “the Kazakh soul.”

“That’s why we needed to work with people from Kazakhstan and Kazakh actors,” Laroche says. “When you’re making a show and you bring all your crew, luggage and culture to the location and the only thing you want is the landscape, the viewer senses this. We didn’t want that. Our crew was from everywhere in the world – French, Ukrainian, Kazakh. On set there were five or six languages spoken all the time.”

Shooting on the ISS sets was particularly slow owing to the need to have actors suspended from cables to depict weightlessness on screen. “When you make 30 seconds [of screen time] in a day, you say, ‘Yes, we did it.’ The difficulty was that the actors needed to be on cables, we can’t do everything with the stunt team, and the most difficult thing was that our scenes in space were full of dialogue and emotion. They’re very difficult to play, and they’re even more difficult when you’re suspended, or so they told me. I didn’t try. I’m not crazy!”

With StudioCanal now distributing the series ahead of its launch in France on Canal+ later this year, Laroche believes the renewed global interest in space exploration means the series will appeal to viewers around the world.

“The space conquest is trendy but, most of all, the journey we are making in Kazakhstan is only known by the Kazakh people. Outside of Kazakstan, these are not landscapes you are used to seeing because there are not many series or documentaries about this area,” he says. “This is a journey with astronauts in a crazy adventure, but they’re mostly universal characters because Anna and Isaak both want to know the truth.”