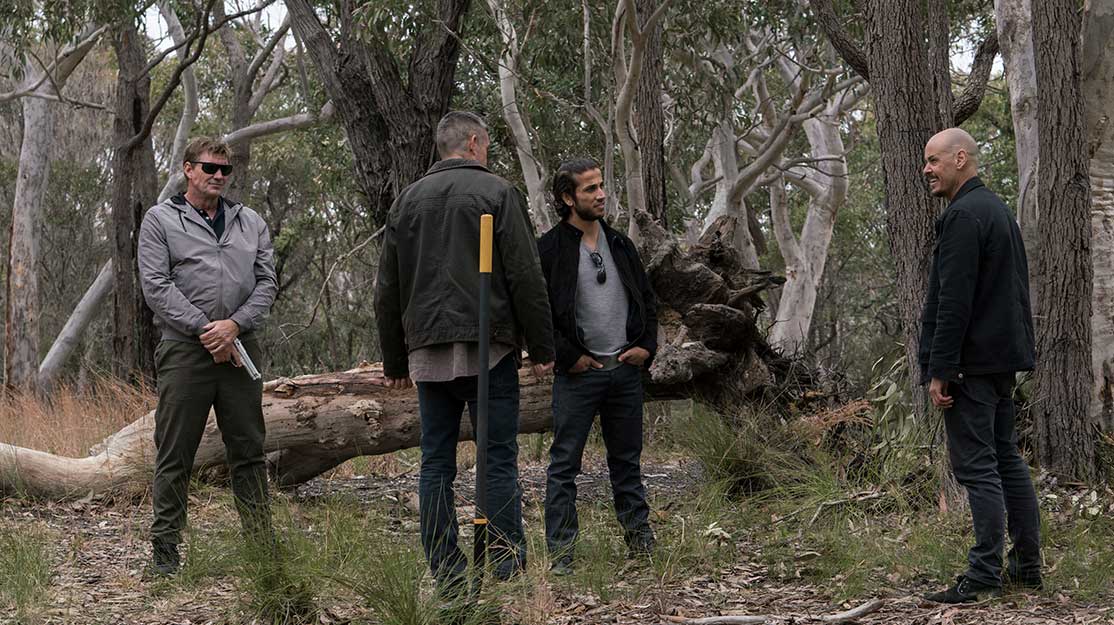 Australian director Nash Edgerton makes his television debut with Mr InBetween, a dark comedy-drama about a hitman juggling his personal and professional lives. He tells DQ about the battle to get the series made, 13 years after the film that inspired it.

When it airs later this year, the debut of Australian dark comedy-drama Mr InBetween will mark the end of a long journey for director Nash Edgerton and writer Scott Ryan.

In 2005 they worked together on The Magician, a mockumentary-style feature about a Melbourne assassin who is both ruthless and caring, played by Ryan, who also wrote and directed the film. Edgerton was a producer.

“We spent years developing scripts,” says Edgerton. “We got close a few times to getting it up within the first few years after the movie. But there weren’t as many avenues in TV at that time, especially in Australia, so it got to a certain point and it didn’t happen.”

One reason why the project kept stalling was Edgerton’s loyalty to Ryan in the face of executives who would have preferred to cast a more recognisable name in the leading role. “I just kept saying, ‘I’m only going to make it if Scott’s going to be in it,’” Edgerton recalls. “Because as far as I was concerned, he was the guy and the reason I was interested in doing it. So I just kept holding out until I got to make it with him. But for me, it was worth the weight to do it with him in that key role and I think the show’s better for it.”

For Edgerton, Scott’s performance in The Magician was one of the highlights of the movie, and he notes that despite the actor/writer’s absence from the screen for more than a decade, Scott could have passed for a seasoned actor on set. “He seems so comfortable in front of the camera. He’s so watchable and enjoyable, to watch him bounce between these two worlds in his life, his personal life and his work life,” he explains.

Scott certainly brings to life the languid, laconic Ray, a man who drifts between his visits to his brother’s home and looking after his daughter to walks in the park with his dog, where he meets potential love interest Ally (Brooke Satchwell). He also finds time to negotiate his day job. One notable incident involves making a man dig his own grave before Ray fires the trigger.

“He’s quite reserved but he has his own clear moral centre – it’s a little left of centre than most people’s but he has a code that he navigates his life by,” Edgerton says of the main character. “He cares about his family and his friends. What’s interesting to me about the show and what drove Scott to do it is he’s read all these books and autobiographies on real-life killers and realised that, as much as that’s their job, they’re still regular people. They still have the same things going on in their lives that anyone else has. It just happens to be that their job is killing people for money.”

Edgerton kept himself busy during the long hiatus between movie and series by directing short films and making his debut Hollywood feature, Gringo, which stars Charlize Theron, David Oyelowo, Amanda Seyfried and the director’s brother Joel, and is out in cinemas today. In fact, Edgerton was shooting Mr InBetween while in post-production on Gringo, providing him with a stark illustration of the differences between making a film and a television series.

“I shot it like a three-hour movie but I edited it like six short films,” he says of the 6×30′ Mr InBetween. “As much as the episodes connect to each other, they’re all still different. The work is contained, they all have their own thing. I actually found that a lot easier to edit than I did the movie because with the movie, you’re trying to sustain almost two hours of a story; but with the TV show, you’re sustaining 25 minutes at a time. Having not done TV before, I wasn’t sure what that was going to feel like but it was somehow more manageable and a quicker process to edit because of that.”

Made for just A$3,000 (US$2,300), The Magician was “super lo-fi,” Edgerton says, describing the film as a buddy movie between Ray and the Italian film student who is holding the camera but whom the audience never sees.

“I wanted the series to feel very natural, light, handheld – I was trying to recapture the feeling the ‘documentary’ gave me, so I was trying to film it that way, just to give more authenticity to the scenes and moments in the show,” he says. “TV is a lot faster [than film]. I had almost 50 days to shoot Gringo, which is one hour and 50 minutes, and then I shot three hours of television in 30 days. So in that way, it was much more of a machine with a much smaller crew but, because I’d never made TV before, I actually blocked it like a movie, so I shot it like a movie. All I’ve made is films and short films, and some music videos, so that was the only way I knew how to make it.”

As well as working behind the camera, Edgerton also had some input during the scriptwriting process, offering suggestions to Ryan. In particular, this manifested itself in terms of Ray’s interactions with his daughter Brittany, which would be based on Edgerton’s conversations with his own daughter, such as a debate over the existence of Santa Claus and Brittany’s insistence that Ray’s friends abide by her swear-jar policy.

In fact, it was casting Brittany that Edgerton says was the biggest challenge, but he didn’t have far to look to find the right actor. His brother Joel isn’t the only family member he has directed – now he can also add daughter Chika Yasumura to the list. And it turned out to be “one of the best directing experiences I’ve had,” Edgerton says.

“Leading up to it, I was quite nervous because she won’t clean up her room when I ask her to, so how am I going to direct her? But she turned out to be so great. My younger brother [Joel], I’m used to telling what to do but Chika was a whole other ball game. I’d auditioned 50-something kids and none of them were getting what it needed to be. My wife suggested throwing her in. She’d never acted before and it turned out to be such a great thing to do.”

Mr InBetween has already received positive reviews after it was chosen to be the only non-US series to be screened at the Sundance Film Festival earlier this year. Originally commissioned by FX in Australia, it is now set to air on Foxtel’s Showcase channel later this year. It is produced by Blue-Tongue Films and Jungle Entertainment and sold internationally by Fox Networks Group Content Distribution.

“I never dreamed of doing TV until Scott presented the idea for this series, so I can’t say I’d never do it again,” Edgerton concludes. “I’d totally do another season with Scott. Ultimatel,y I love filmmaking and storytelling so it’s all about if it’s the right project and if it’s the right medium to do it. I still love making short films but, after Gringo, I want to make another movie.”