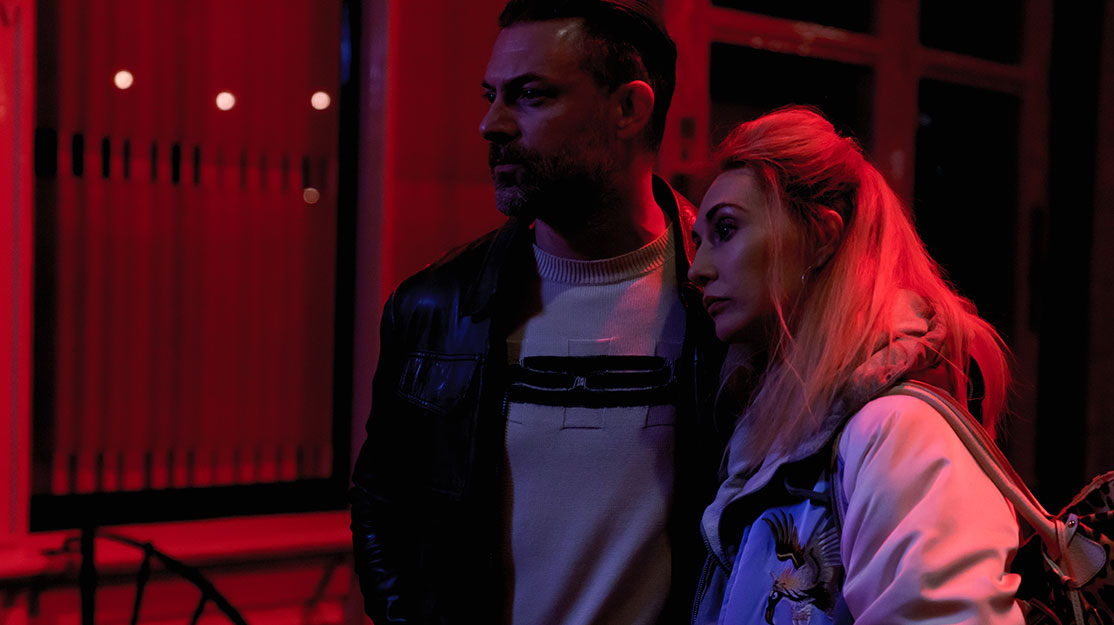 Halina Reijn, one of the stars of Dutch series Red Light, and directors Wouter Bouvijn and Anke Blondé speak to DQ about making the thriller, in which three women are drawn together through the dark world of prostitution.

With their fledgling production company Man Up, Dutch actors Halina Reijn and Carice van Houten have set out their ambition to tell dark, edgy stories from a female perspective. Their first project was 2019 feature film Instinct, in which Game of Thrones star Van Houten plays a psychologist who becomes infatuated with the sex offender she is treating in prison.

Now, with Red Light, their first television series, the pair are both on screen in a story that will take viewers into the world of prostitution. The co-creators are also executive producers on the series, while Reijn is also a co-writer.

“I was always obsessed with the red-light district when I was very young. I always thought, ‘What a strange world,’” Reijn (Valkyrie, Black Book) tells DQ. “ When I was growing up, I was told it was a symbol of progression, freedom and feminism. Of course, it’s very idealistic to look at it that way, but it’s not like that. There’s human trafficking going on and there are so many sides to the issue of prostitution that I thought it was a great arena to create something about sex, power and gender roles. Everything I, as a woman, am struggling with is magnified in that profession and everything that comes with it.”

The 10-part series introduces three women with completely different backgrounds whose lives become inexplicably linked. Sylvia (Van Houten) is a prostitute who runs a brothel with her shady boyfriend and pimp in Antwerp’s red-light district. Meanwhile, Esther (Reijn) is a famous soprano desperate to have children and Evi (Maaike Neuville) is a cop trying to juggle a major case with raising a family.

When Esther’s professor husband suddenly goes missing, the trio’s destinies become intertwined as they turn to each other to escape the traps they have fallen into and liberate themselves from the control of the men in their lives.

Produced by Eyeworks (The Twelve) and Hollands Licht for Belgium’s VTM and BNNVARA in the Netherlands, Red Light had its world premiere last month at French television festival Canneseries, where its ensemble cast won the special performance prize. It is due to air locally in February next year.

From different social and economic backgrounds, Sylvia, Esther and Evi are linked by their struggles with motherhood, work and their relationships with their partners, Reijn explains. As their worlds begin to collide, classic female archetypes such as the virgin, prostitute and mother are upended.

“Sylvia is the sex worker. She’s an ageing prostitute and she also becomes a pimp herself, so it’s not clear if she is a victim or is she an accomplice,” the award-winning actor, writer, director and producer says. “She needs to liberate herself from the dominant men in her life. Then Esther is a famous opera singer with a great husband and money, but she’s obsessed with having a child and thinks, ‘If I don’t have a child, I’m not a woman.’ That’s her struggle.

“Then you find the detective who has a family, a marriage and a job, but she regrets having children. She is dreaming of escaping and disappearing into the sunset – something we have seen men do in so many films that we don’t even think about it. It’s such a taboo [for a female character] and that appeals to me a lot.

“Who are these women who want to escape their families? They must feel so alone. I wanted to write about all the aspects of being female within patriarchy, but if there is one thing this show is about, it’s freedom – freedom from yourself and your own expectations of what you should be.”

Red Light was Man Up’s “first child,” though Instinct wound up being produced first because raising financing for the series took longer than expected, owing to Reijn and Van Houten’s ambition to make a cinematic series that demanded a budget higher than Dutch series typically enjoy. DPG Media and BNNVARA coproduced the show with Eyeworks and Man Up, while the project was also supported by Flanders Audiovisual Fund, the Netherlands Film Production Incentive, the Belgian Tax Shelter incentive and SCIO Productions. Federation Entertainment is the international distributor.

Reijn developed the initial story, the characters and its thriller structure with Frank Ketelaar (The Adulterer), before bringing in Esther Gerritsen (Instinct) as the head writer, while fellow writer Christophe Dirickx (Tabula Rasa) brought a Belgian perspective to the series.

“I stayed on the team and then we had other writers coming in and helping us out because it’s such a huge project. Ten episodes is an insane undertaking,” Reijn says. “We could use all the help that we could get, especially with the three different worlds [of the main characters]. But I credit Esther with making it an exciting, thrilling, hypnotising thing. Humour is also something very important in this – otherwise, with these themes, you couldn’t watch it. You need some jokes and some comic relief. And Carice, in her part, is also amazingly light and colourful.”

Research was key to the development process, with Reijn leaning on her uncle – a prosecutor of crimes including human trafficking and prostitution – for information, while the team also spoke to police officers and sex workers, with much of Sylvia’s plot line based on true stories.

“I started the project being fairly open to legalising prostitution. I thought that was better than it being illegal,” Reijn says. “But I’m not sure anymore. It’s so incredibly hard. It is such a complex discussion. You encounter 14-year-old girls who tell you they want to be prostituted by their boyfriend, that they’re in love with him and they would do anything for him. It’s horrifying. As far as talking about #MeToo and content and gender roles, this is the most extreme area of that.”

While Van Houten is best known for playing mysterious priestess Melisandre in Game of Thrones, the part of Sylvia was created especially for her as Reijn sought to challenge her production partner’s acting chops.

“The first thing we decided was, ‘OK, we’re going to make a show about prostitution, consent and control.’ And then the second thought was, ‘This is a great part for Carice to be the sex worker at the centre of that,’” Reijn recalls. “This is something she’s never done before, and that’s very scary for an actor. It’s a place you don’t necessarily want to go to. But I thought it would be so great for her.”

Now focusing on writing and directing, Reijn jokes that she came out of retirement to play Esther, a character who appears to have it all but finds herself in an existential crisis over the fact she is not a mother. Part of the role also called for her to sing on stage in front of a packed crowd.

“I thought it was very embarrassing, because you have to really sing. If you don’t really sing, your throat is not going to make the right movements to make it believable,” she says. “You can imagine a very big concert hall filled with extras, and they all had to pretend I was singing beautifully. Although I was singing along with the tape, they could actually hear my horrifying voice, so it was very embarrassing for me to stand there.”

Behind the camera are directors Wouter Bouvijn (The Twelve) and Anke Blondé (The Best of Dorien B), who were both struck by Reijn’s passion for the project and immediately wanted to come on board.

“It felt so good to meet her and to feel the energy around the project,” says Blondé. “Of course, I’m a woman and it’s very interesting for me as a filmmaker to explore every perspective of womanhood, so that was really nice. We also had the chance to develop these three interesting characters together with Esther, Halina and Carice.”

Bouvijn adds: “It was interesting for us to be involved during the writing process, taking part in the readings with the cast to define these characters. We’re both actors’ directors, so it was very necessary to develop the characters and let the plotting do its own thing. The most important thing was the evolution of these three women.”

Helming the first five episodes, Bouvijn sought to define the worlds of the three lead characters through the use of different colours, an approach that is particularly noticeable when the camera trails Sylvia walking through the neon glow that illuminates the red-light district.

“If you walk in the red-light district in Amsterdam or Antwerp, it almost looks like Disneyland,” he says. “You have the beautiful red colours and lighting. We also wanted to do it that way. At the beginning, we created this Disney look. But as the series evolves, it becomes more realistic. At the end, it’s not that Disney.”

Unable to film in Antwerp’s real red-light district, the crew built their own version in the Belgian city, while some real streets in Amsterdam were also used. On set, the actors were given the freedom to use the space as they wished, with a Steadicam following their every move.

Meanwhile, crane cameras were used “to pull out all the stops to make it really cinematic,” says Bouvijn, adding: “That’s also the hard part of shooting a TV series, because you shoot it faster than a film but your ambition is to make it cinematic.”

Reijn says she and Van Houten were clear about how they wanted to portray the three central characters and the world they inhabit, refusing to stray into highly sexualised portrayals of sex workers.

“If you have the courage to show your vulnerability and your own honesty in your work, people will feel a connection to that. I hope so. But there are some very strong male characters in our series, so it’s not only women.”

While the show deals with several taboos relating to womanhood and motherhood, Blondé says many of the characters have swapped traditional gender roles: “Evi’s a male character in a way, as we switched the genders. We always thought of Evi as a man and what she would do. Then we talked to Joren [Seldeslachts], who played Gust, because he was more emotional. It’s a really good time for this show when it comes to gender, being a woman and being in relationships. It’s a very important issue right now.”