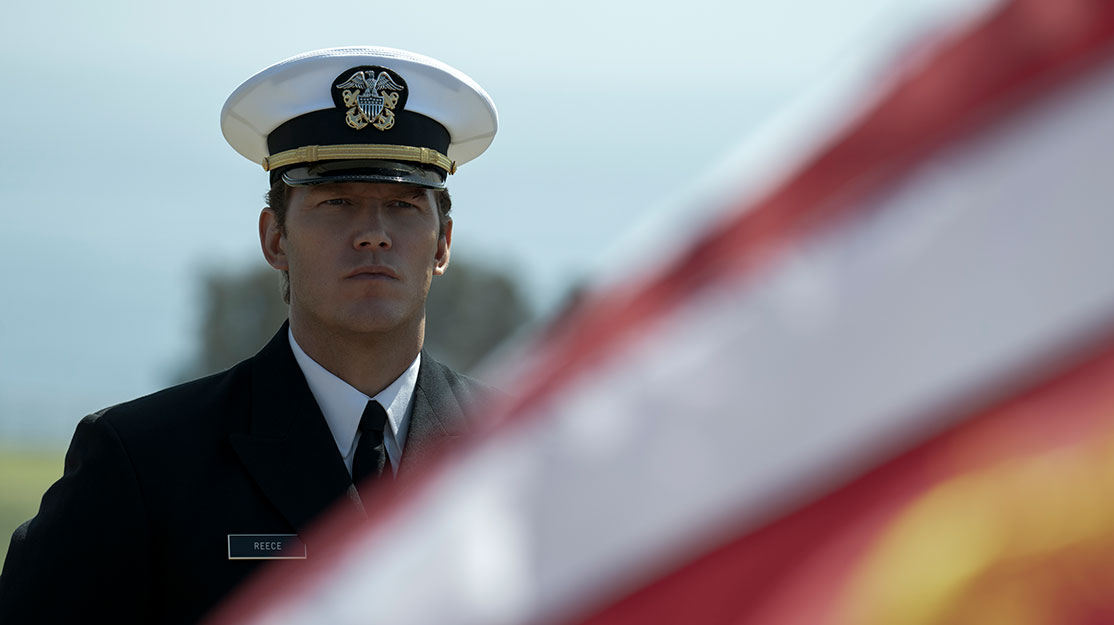 In the fog of war

Having directed films including Training Day and The Equalizer, both starring Denzel Washington, it’s no surprise to hear Antoine Fuqua reveal his interest in stories featuring broken characters.

“Without that, you don’t have much,” he says. “Difficulties in life, the challenges in life, are what make it interesting. I love happy people, I love comedy, actually. But as an artist, that’s not what I want to do.”

It’s a theme that is alive and well in his latest project, Prime Video series The Terminal List, which, despite its Navy SEALs dressing and an opening scene in which James Reece (Chris Pratt)’s SEAL Team 7 is ambushed during a covert mission, probably isn’t the show you think it is.

“It’s more of a suspense thriller,” Fuqua says. “To me, that’s what’s most interesting about it. The fog of war is tricky, the fog of violence is tricky. What you remember and what really happened can get very confusing. That’s what happens a lot every day. You get in a car wreck and you can’t quite remember what happened. How the brain works is fascinating.”

Based on the Jack Carr novel of the same name, the series – which launches today – sees Reece questioning his own mind and judgement in the fallout from the catastrophic mission, of which he is the only survivor. He returns home to his family with conflicting memories of the event and questions about his involvement. But as new evidence comes to light, he discovers dark forces working against him, endangering not only his life but also those of his loved ones.

Carr’s book was published in 2018, and both Pratt (Parks & Recreation, Guardians of the Galaxy) and Fuqua – at first separately and then together – pursued the chance to adapt it as a feature film. Then, as they got into development, the breadth of the project proved too great for a single movie and they transitioned to making it for TV. The series is produced by Amazon Studios and Civic Centre Media in association with MRC Television, Pratt and Jon Schumacher’s Indivisible Productions, and Fuqua Films.

Showrunner David DiGilio joined the team two-and-a-half years ago with a plan to lean into the psychological side of the story, pitching it as Fuqua meets Alfred Hitchcock.

“They flipped out for it. What was really cool was Jack Carr also flipped out for it, because it’s a different take on the material and he was very excited to delve deeper into the psychology of James Reece and this question of what’s going on in his head,” says DiGilio, speaking at the Monte-Carlo Television Festival, where The Terminal List had its European premiere.

When adapting a book for the screen, writers can often make the mistake of changing too much, he says. “You need to change things like certain story points, certain characters, to make the cinematic experience work completely. But if you lose the essential ingredient of the novel itself, you’re going to lose the audience completely.

“For us, we knew the military authenticity, this incredible story of vengeance and accountability, and James Reece as probably the most authentic character of warrior class we’ve seen in a thriller, were things we had to maintain. Everything else, we knew we could heighten or dive deeper into things, like what’s happening in his head, and that combination would not only make for a great show but it also becomes surprising to new and old fans.”

At the pilot phase, DiGilio regularly spoke to Carr to test every idea he had and make sure the author was on board. Then when he went into the writers room, he put the book away and broke down season-long character and story arcs. Military veterans were also in the room, including Army Ranger-turned-screenwriter Max Adams, while SEAL technical advisors were only a phone call away.

“Then we actually brought the book back and tested every idea against the book,” DiGilio says. “That final phase was the perfect synthesis of two things – how you would break a show and break a show that honours the book. Ultimately, the ‘A storyline’ from the book is completely reflected in the show, and then we were able to create and fill out B, C and D storylines inspired by the book that add a lot of discovery to those characters.”

“We knew looking at the book that it’s almost entirely James Reece driven, and if you made a show that fully reflected that, you would kill Chris Pratt,” DiGilio says. “There are not enough hours in the day for Chris to do the material that is in the book, so we knew we needed other characters’ points of view. We built out the storyline for Katie, for Sec Def Hartley and then we created a new character, Agent Tony Layun, played by JD Pardo, who is a fugitive hunter.

“We knew we needed to keep the pressure on Reece. Not only are you building out roles you think will excite people but, as a showrunner, you’re also consciously thinking, ‘How am I going to take care of my number one?’ He’s got a lot of page count, a lot of time, but we can’t have him there all day and all night. So we had a blast creating those characters. The biggest surprise was when we got to casting and, holy crap, the cast – it ended up being the biggest cast I’ve dealt with. I joke that I came out to Hollywood to make huge-budget, amazing movies but I had to go into streaming TV series to do that, because that’s what this show is.”

That ensemble features Kitsch, the True Detective and Waco star best known as Tim Riggins from Friday Night Lights. “I begged him to do it. I called him, Chris called him. I had the SEALs call him. That’s when he said yes, when the Navy SEALs called him. He woke up and saw them there,” Fuqua jokes of bringing the actor on board to play Reece’s best friend, a West Coast “beach bum” whose loyalty to Reece will be tested through the series.

For Kitsch’s part, “I had wanted to work with Antoine forever and Chris Pratt was on the rise. We had a great chat and then I Zoomed with Pratt and Dave,” the actor says. “This relationship with Ben and Reece in the show is so important, and just getting a vibe of who he is and how he works and whatnot, it was pretty seamless. There’s this fine line he’s walking this whole time. The challenge was to root that and be authentic through that.”

As well as spending up to four hours every day in make-up to have Edwards’ tattoos applied, Kitsch’s bid for authenticity was ably supported by the numerous real-life Navy SEALs who were a constant presence on set.

“That was the toughest part of it,” he says of his attempts to stay true to the serving men and women he is representing. “But you live for it. That’s why you sign up. The military stuff, the gun stuff. To work with those SEALs and do that is a lot of fun.

“I’ve never done shotgun work so I probably loaded and reloaded that thing on the move walking round my house 10,000 times. Ray [Mendoza, a technical advisor] would drop the shotgun off with these shells, and there are shells all over my house. You just have to be unconsciously seamless with it.”

Behind the camera, DiGilio believes there are few directors better suited to The Terminal List’s blend of military action and conspiracy drama than Fuqua. The writer also describes him as “one of the best actor’s directors in Hollywood,” owing to the way he works with his cast in pre-production and then on set.

“He was the perfect person for this project because he can nail and set the tone for all the action, but he has been dying to have material like this where he can show this more Hitchcockian side to what he does, where he can plant the seed and make the audience wonder what’s coming instead of just knocking their socks off with an amazing action piece,” he says. “Training Day is one of my all-time favourite movies, and that has the balance of character and action that is a perfect example of what this could be.”

Fuqua’s directing career began with music videos, working with stars such as Toni Braxton, Stevie Wonder and Prince, as well as rapper Coolio for Gangster’s Paradise. Those videos, and working in commercials, were the training ground where he learned the tools of his trade and, perhaps more importantly, what not to do.

“You can fall in love with all the toys and you forget it’s really about the actor,” he says. “All of a sudden, you have cameras in places where you can’t see the guy’s face. Sometimes the biggest thing I’ve learned is what not to do.”

The director likes to spend time getting to know his cast, talking to them and finding out how they feel about their characters. “When they get excited, I get excited,” he says. “For the action stuff, we had Navy SEALs with us all the time, so that helped us try to be authentic. The dramatic scenes, we handle them in the way we always do. We work through them. They develop sometimes in the moment when you have great chemistry.

“On the first day, Taylor and Chris were cracking jokes right away and having fun. I was listening to them through my headphones. The magic comes from that. They respect each other, they get along. I don’t know what they might say, but they have rhythm and some stuff you can’t write. I like to let them play and find it themselves, because they find things actors just can’t write.”

It was an approach appreciated by Kitsch. “For me personally, if you direct me before I even show you what’s going to happen or what I want to do, we’re probably going to have a tough go,” he says. Instead, Fuqua was “very empowering. I love his process, because he gives you room to go, to take risks, to push it. When you have that, you can fly. I don’t feel you’re going to get reprimanded or whatever you want to call it if you take a risk and it doesn’t work. He wants you to take those risks.”

The Terminal List is the first of five books written by former Navy SEAL Carr, and DiGilio says there is a clear roadmap for potential future seasons of the series should fans want to get ahead of the show. But for all of the drama’s talk of modern-day special operations and geopolitics, Fuqua is quick to insist The Terminal List is less a commentary on the US political landscape and more eight episodes of pure drama and escapism.

“It’s just entertainment,” he says. “It was a book, the writer of a book was a SEAL himself. It’s really more about entertaining the audience, and giving them a good suspense thriller is what we focused on.”