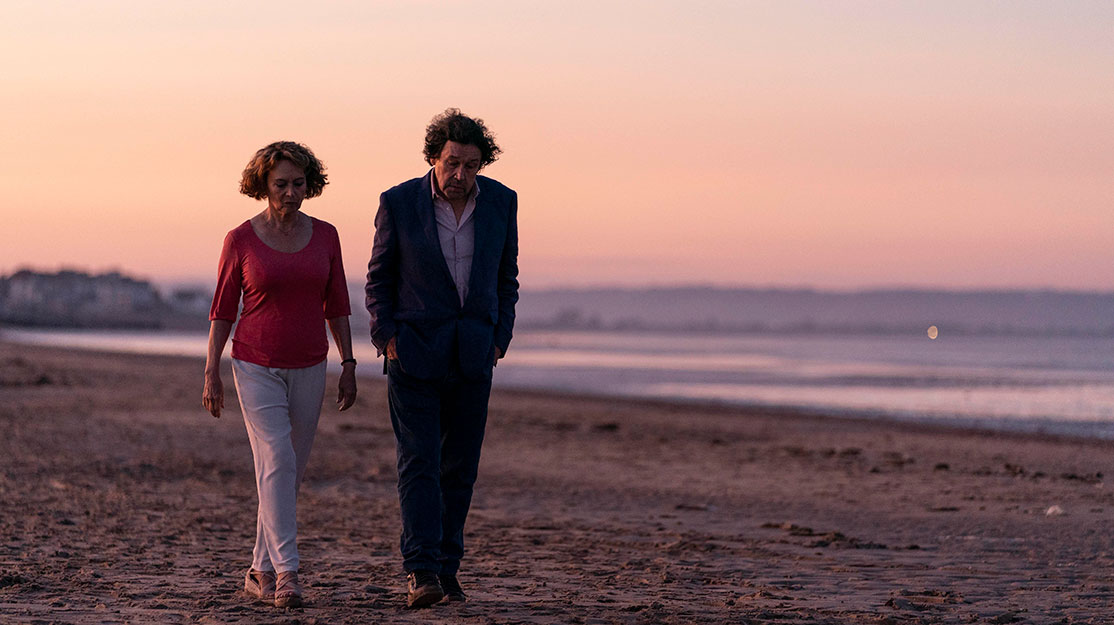 The opening moments of Flesh & Blood are illuminated by flashing police lights, with officers trudging across a shingle beach and into a pretty seafront house. A destroyed balcony and bloodied floor reveal signs of a struggle as what appears to be dead body, wrapped up and tied to a trolley, is wheeled away.

It’s an ominous start for this four-part family drama, commissioned by ITV, as long-buried secrets and lies threaten to tear apart the relationship between widowed mother Vivien and her three grown-up children, Helen, Jake and Natalie. The catalyst is Vivien’s blossoming relationship with Mark, whose increasing presence raises suspicion among the siblings as he turns Vivien’s attention and priorities away from them.

As they begin to question their mother’s 45-year marriage to their late father, Terry, and attempt to find out more about Mark, the trio try to pull together amid long-held grudges and their own complicated personal lives as they spiral towards tragedy.

Francesca Annis (Cranford) stars as Vivien, with Mark played by Stephen Rea (The Honourable Woman). Claudie Blakley (Manhunt) is Helen, whose high-powered job causes her to neglect her marriage; Russell Tovey (Years & Years) plays Jake, a gambling addict trying to reunite with his estranged wife while sleeping with his personal training client for money; and Lydia Leonard (Gentleman Jack) completes the family as Natalie, who is sleeping with her married boss.

“I loved it from when I read it,” Annis says of her interest in the project. “It opens up with quite a classic scene – the body being carried out. I like the ease of it all and also it’s two daughters and a son – no acting required there. It was really nice to be offered a script that seemed quite light and then it gradually slips into what it is, which is a thriller.”

Annis says Vivien is too busy having a good time with romantic new beau Mark to notice any upset among her children, but must eventually confront their unease. “She’s a very bright woman and she can see what’s going on,” she says. “Her children, like all children, have got issues and she’s not party to that. But she is very aware that there’s something going on with each one of them.

“Her husband died 18 months before, which gives her the platform to just move on without a sense of guilt, I would imagine. I don’t think she feels guilty. Why should she? It’s not deeply complicated, it’s quite clear she wants to live in the moment and get hold of life now.”

Rea was also intrigued by his “great role” in a show that goes inside “the hell that is family.” He adds: “It’s a nice way for people to think about their own families as they are watching and seeing how fucked up they are. I never know how the family remains as an item. All it does is drive people insane.”

As for Mark’s reception when he arrives unannounced at the family home, “I just thought the girls were horrible to me,” he says of Helen and Natalie’s reaction. “They really were, the way Claudie looked at me. They could have been warmer!”

Having built a successful business with her late husband, Vivien is not short of money, and thus the siblings are immediately suspicious of Mark’s intentions towards their mother. Rea’s ambiguous performance, meanwhile, means viewers are equally unsure of his motives.

“It was difficult because there had to be an ambiguity and a lot about him was much less presentational than some parts that you get,” the actor explains. “I thought that was quite interesting. He’s a man who’s trying to live a new life.

“The writing is very, very good,” Rea adds of Sarah Williams‘ scripts.  “It’s very easy to inhabit, and that’s all you ever look for when you get a script. You know within two pages if it’s got a structure and a sense of itself, and this is particularly good. She’s really considered how she wants to approach the whole notion of family.”

Chief among those struggling with Mark’s arrival is Jake, who finds himself drifting through life after being dumped by his wife and sleeping with one of his personal training clients for money, which he then spends on his kids.

“Jake is like the most popular boy at school, who didn’t do well academically but just sailed through on charm and being cheeky, had loads of mates, was really sporty, left school and never really grew up,” Tovey says of his character.

“I feel like he’s one of these people that would say your school years are the best years of your life. When people say that now, I’m like, ‘You left there when you were 16. What the fuck have you been doing since?’ I find it so strange.

“He’s an example of when men get to their 30s and they just drift too far away from the shore and can’t find their way back and don’t really know who they are. He’s led a quite a charmed life with his family. Now he’s definitely got this alpha-male toxic agenda, which he’s never really dealt with.”

Things come to a head when Jake discovers his mother is in a new relationship and doesn’t need to turn to her son for support in the aftermath of Terry’s death. “That’s the role [Jake] should have taken when his dad died and it’s holding a mirror up to him and saying, ‘You failed at life, you’ve nearly sent your kids out onto the street because you’re a gambling addict, you broke up with your wife. You’re failing,’” Tovey notes.

“He’s a man trying to blame someone for where he’s got to in his life, and then Mark turns up and he’s like, ‘Bingo, it’s him – that’s the reason it’s all screwed up for me.’”

Through Jake, Flesh & Blood shines a light on mental health issues, focusing on a character struggling to turn his life around. “He says at one point he got into gambling because he wanted more money for his kids, and that’s so tragic to me because it’s that paradox,” Tovey says. “I love him. I love playing him. I love the nuances in him. I love how proud he is, how arrogant he is.”

Blakley, Tovey and Leonard would often improvise on set to hone their sibling dynamic, but their relationship is in stark contrast to Tovey’s recent series, Years & Years, in which his character Daniel had a close bond with brother Stephen (Rory Kinnear).

“When you go to other people’s families and you spend time with them, they always feel quite alien to your own,” Tovey says. “I find that fascinating. In Years & Years, Stephen and Daniel felt like they were best mates and they talked. In this one, they are with each other all the time but they know fuck all about each other. They’d be there for each other, but they wouldn’t know what was going on or why they’re there.

“I thought that was really fascinating in what Sarah’s written, and it’s good for the thriller because it means that so much stuff can be bedded and hidden and obscure and kept away from the truth.”

Complicating matters further for the family is neighbour Mary (Imelda Staunton), who has lived next door to Vivien for 40 years. Despite not being family, Mary appears unhealthily attached to Vivien and her family’s unfolding drama.

It’s through Mary that the drama opens up, with her voice offering early narration as she recalls events from her perspective, with each subsequent episode featuring a different voiceover.

The Oscar-nominated actor, known for film roles in Vera Drake and the Harry Potter franchise, says she was drawn to project through the page-turning script, the characters’ messy lives and the fact she hadn’t ever done anything quite like it. “She’s a pretty ordinary woman, she’s a bit weird,” she says of Mary.

“She’s just a good mate next door, but a little bit protective, one might think. It wasn’t what I thought it would be, and then it was, and then it changed again so it really kept me guessing. You don’t know where it’s going and it didn’t have a logical arc, which is quite nice.”

Filming took place on the south coast of England in Sussex, on location at real beachfront houses. An uncharacteristically unbroken spell of beautiful weather accompanied the 10-week shoot, evident on screen, meaning all the actors relished their time on set. They also praise director Louise Hooper’s relaxed approach and willingness to empower her cast’s creativity, hence the aforementioned improvisation.

“It really didn’t matter if you emailed her in the middle of the night, she always got back to you,” Annis recalls. “She was great and she always listened to everybody.”

“These guys are at the top of their game, they’re fantastic,” says Hooper (Cheat). “They’re bringing tonnes to it and, because they’re so experienced and relaxed, and I’m pretty relaxed about everything, we can enjoy it and talk about it and discuss things.”

There’s nothing relaxing about this story, however, as the family face up to a multitude of problems, while the prospect of a murder taking place is likely to keep viewers intrigued through the four-hour running time.

But rather than being the main pull of the series, produced by Silverprint Pictures and distributed by ITV Studios Global Entertainment, the thriller element “just gives it another layer than just a family dynamic,” adds the director. “It works really well, and also what I like about it is it’s not pushed too much. The family is the main thing and the thriller’s the little tease.”