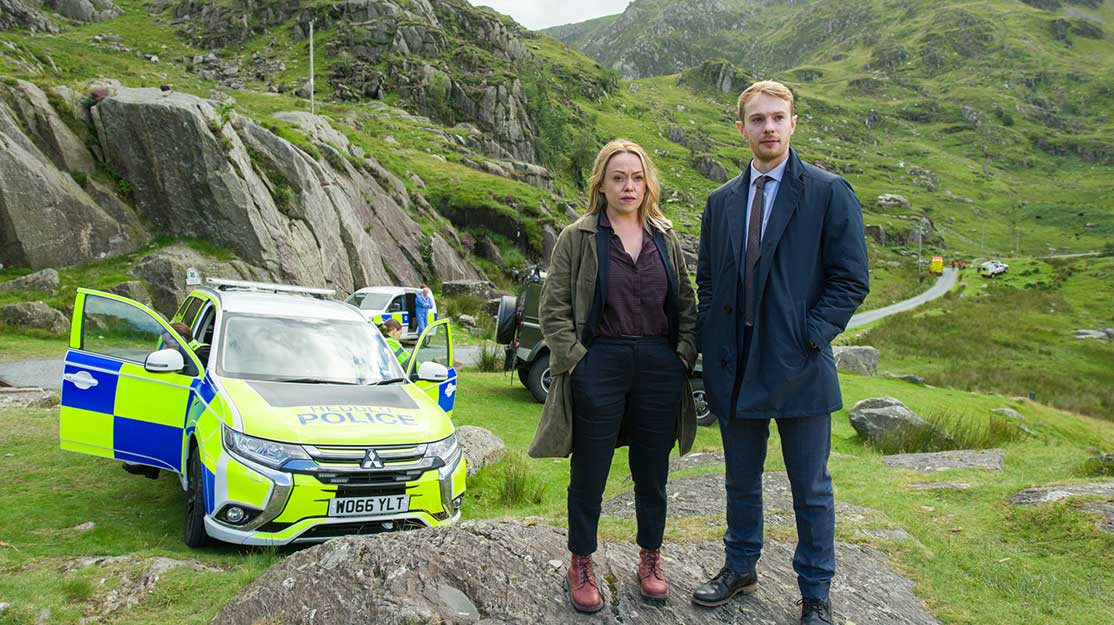 Dark and broody drama Craith (Hidden) looks set to keep the international spotlight firmly on Welsh drama. Co-creator Ed Talfan discusses making the bilingual crime series, which goes against the grain by revealing its villain from the beginning.

The landscapes in North Wales are breathtaking. With lush green hills and mountains standing on the edge of Snowdonia National Park, overlooking the Menai Strait, a stretch of water that separates the mainland and the island of Anglesey, the region must be a director’s dream.

Point the camera in any direction and the scale and atmosphere of the environment surely fills the lens. At least it would if you could see it. On the wintry November day DQ travels to Anglesey to visit the set of S4C drama Craith (known as Hidden in English), the weather is biblical. Rain and gale-force winds are lashing down on anyone that dares to stray outside, turning roads into rivers and largely hiding the towering peaks from view.

Unperturbed, the cast and crew soldier on, seemingly unaware of the conditions surrounding them. The day’s filming is taking place at the Ddraig Goch (Red Dragon) Garage, which offers passing motorists the chance to refuel and pick up supplies from the small shop adjacent to the forecourt, found a short drive from the village of Dwyran.

When the cameras start rolling, a small blue van pulls up in front of the shop. Inside sit a man and a young girl, Dylan Harris and his daughter Nia. After a short conversation, Dylan gets out of the van and comes into the shop, its shelves stocked with a range of household items and an array of Welsh flags adorning all corners of the single room.

It’s a small but important scene, providing a window into the home life of Dylan, who, in contravention of typical murder-mystery rules, is revealed at the start to be the show’s villain.

The story juxtaposes the viewpoint of Dylan, played by Rhodri Meilir, with that of DCI Cadi John (Siân Reese-Williams), a police officer drawn back to her childhood home due to her father’s ill health. But after the body of a local woman is found in a remote mountain river, her world – and the world of those around her – is changed forever when it transpires there may have been more than one abduction.

Produced by Severn Screen for S4C and BBC Wales, the gritty crime drama is executive produced by co-creators Mark Andrew and Ed Talfan. The producer is Hannah Thomas and the series is distributed globally by All3Media International.

“Dylan’s a guy who’s had a terrible lot in life,” explains Talfan. “He’s had a very difficult domestic situation and comes from a family that’s toxic. The series doesn’t seek to use that as an excuse for what he does; he pays the price for what he does. Hopefully across the series we see a portrait of somebody who is in his own agony and inflicting that agony on others.

“There are moments, particularly in the first half of the series, where what comes across is a vulnerability and, within that, there is a flicker of likability, which is uncomfortable – it should be uncomfortable – but in the same way the best baddies always have their own charisma about them. We spend a lot of time investing in him and the world he inhabits because often these characters are people at the fringes of the drama. We just wanted to go on a journey with him.”

In contrast, Talfan describes former army officer DCI John as a straight-talking detective who’s comfortable in her own skin and extremely good at her job.

“There’s a version of the crime genre where detectives have super powers, these magic moments where they’re better than everybody else,” Talfan continues. “Cadi is someone who’s bloody good at her job, is really hardworking and does the hard yards. All the police you talk to, it’s not about eureka moments. It’s about putting the work in and actually visiting the evidence, revisiting it and being like a dog with a bone. There’s a tenacity in her that’s real, rather than a Captain Underpants flies in and says, ‘I know what the problem is here.’ For me, that’s reductive and a bit tedious.”

The creative approach to the series is a far cry from 2013 Welsh drama Y Gwyll (Hinterland), which has gone on to become a global success. Many of the crew who worked on that show have now reunited for Craith, which dispels Hinterland’s case-of-the-week format.

Talfan, who also co-created Hinterland, says it was clear from the outset that they didn’t want to conceal the killer in Craith. “That’s not the game we’re playing,” he explains. “We’re up front very early on about who the abductor is and the question is getting to understand that character because he’s not just a two-dimensional evil-doer. We get to understand his world and see how he works and how he lives alongside his mother and his daughter, and the dynamic that unfolds when he loses a girl [who becomes the first victim], which is what kicks the series off, and then abducts a new victim. It’s a portrait of an unfolding crime from the point of view of the police and the criminal.”

Part of the reason behind following this format was a desire to do something completely different to Hinterland, in a way that allowed the creators to delve deeper into the cast of characters than is usually possible in a single 90-minute procedural.

“It was great to be able to get a really good ensemble and know that all of those characters were going to travel across eight hours,” Talfan says. “It made it more fun to write, more fun for the actors to play and more satisfying for the directors as well, because they sometimes find it frustrating when they’ve got a visiting actor who’s got two days on set in which to film four scenes.”

While the story format differs between Craith and Hinterland, the two dramas are united by the way they are shot, with filming taking place back-to-back in Welsh and English. The Welsh version will debut on S4C on January 7, 2018, before a bilingual version airs later in the year on BBC Wales. BBC4, which previously acquired Hinterland, has already snapped up rights to Craith and will also air the bilingual version in 2018.

Quite simply, each shot is filmed in Welsh and then, if required, it is immediately repeated in English. “It’s an organic process that comes from the creators,” Talfan says, noting that there are no stipulations requiring a certain amount of the bilingual version should be in English.

“Actually, certain characters in the story world will speak Welsh and some won’t. So you might have an episode that balances 60/40 English but then you might have one episode that is considerably more Welsh, just because that’s where the story is at. It’s true bilingualism, rather than a country where some people speak English and some people speak Welsh.”

Notably, some scenes play out with no dialogue at all, but that wasn’t a conscious decision to avoid reshoots, Talfan insists. “It’s genuinely the kind of drama Mark and myself and director Gareth [Bryn] love, so those elements are shot once. For me personally, because my experience of being Welsh is bilingual, if you were making a single version it would possibly be the bilingual version because that’s reflective of how I live in the country. But there are people in Wales who speak Welsh pretty much all the time and you may find some programme makers would love to make solely Welsh programming.”

Development began in December 2015, with Andrew leading a scriptwriting team that includes award-winning Welsh novelist Caryl Lewis and Bafta Cymru-winning writer Jeff Murphy. Treatments and a script bible were completed in 2016, with all eight scripts finished by early 2017.

“It’s been quite intense,” Talfan admits, though he describes shooting in North Wales as a joy, despite the changeable weather. “We shot some of the series in South Wales for practical cost reasons and then some of it in North Wales, so those are the logistical challenges. Then because it’s a bilingual show, you need a bilingual cast and we’re always trying to bring in new faces. You’ve got no baggage with them [from previous roles] so you surrender to the characters. Celebrity casting applies to a lot of high-end drama. I understand why it happens, and there are very good reasons for it, but there’s a lovely sense of quality between the ensemble and the fact the audience don’t know them.”

Since its launch in 2013, Hinterland has certainly helped to put Welsh drama on the map, drawing comparisons to the wave of Nordic noir crime dramas over the last decade. But beyond the creative or production process, Talfan says the biggest game-changer for Welsh drama in the post-Hinterland landscape has been a psychological one.

“If we wanted to do something with a certain level of ambition, which requires a certain level of budget, we would always go to London and ask a broadcaster for their support and the green light,” he explains. “If for any reason they passed, usually you would get back on the train to Cardiff and think the project was dead in the water. But on Hinterland, the thing that changed everything was the back-to-back production that had first been done in the early 90s and doing it in tandem with a partner like All3, because they could see the show would sell and they believed in how we would deliver it.

“It’s completely changed how we approach projects now. If you get a ‘no’ from one organisation, you don’t think all your work’s in the bin; you think there is a way of financing this, you just need to be internationally minded and look at where those partnerships are. So for people working in the regions, it’s been hugely important because it used to feel like you could only get a ‘yes’ out of London. It doesn’t feel like that anymore.”

A seriously dark, broody and compelling drama, Craith is well placed to repeat Hinterland’s international success and, together with other recent S4C dramas such as Bang and Un Bore Mercher (Keeping Faith), ensure the international spotlight continues to shine on Welsh drama, whatever the weather.