It’s a truism in the TV business that audiences prefer domestically produced dramas over acquired series. But for many territories, the next best thing after homegrown shows is US scripted content. That’s why, on the eve of programme market Mipcom, international TV channel buyers will be watching US schedules closely.

Right now is an important juncture in the year because US broadcast and cable networks have just launched their latest batch of new shows. While some international networks have already acquired these series (basing their decisions on scripts or pilots), many prefer to wait and see how well shows rate before committing their cash.

From this perspective, Mipcom comes at the perfect time, providing a great opportunity for buyers and sellers to discuss a show’s performance face to face in Cannes.

In this week’s column, we take a look at some of the new drama series that have just hit the US market, providing a few pointers as to how they are shaping up during their debut seasons. The shows are listed according to how well they have started out. 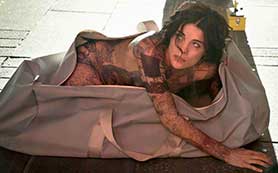 Blindspot
NBC’s Blindspot is one of the top performers among this year’s new US dramas. Last week, we reported that its first episode attracted 10.6 million viewers and a 3.1 rating among 18-49s. Since then, delayed viewing has pushed the show’s total viewership up to 15.9 million (Live+3 ratings). The show, which centres on a tattooed woman found in a duffel bag in Times Square, has been given the go-ahead by NBC to deliver nine more scripts — an encouraging sign. Buyers that pick up this series can be confident it will come back for a second season. The show is distributed by Warner Brothers International Distribution, which has already licensed it to TVNZ New Zealand, CTV Canada and Sky Living in the UK. 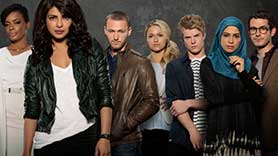 Quantico
We took a close look at ABC’s Quantico in this week’s Writers Room. The story of a group of FBI trainees attempting to foil a terrorist plot attracted 7.1 million viewers and a 1.9 rating among adults aged 18-49 in its Sunday 22.00 slot. This is a good opening, and the reviews have also been generally positive. Distributed by Disney, the show has already been sold to CTV Canada and UKTV in the UK. Quantico doesn’t look as much like a dead cert as Blindspot to return, but it is better positioned than most shows to get a renewal.

Limitless
A spin-off from the Bradley Cooper-starring movie of the same name, Limitless is about a man who takes a super drug that allows him to use 100% of his brain’s potential. He then uses his newfound ability to work with the FBI. Airing on CBS, Limitless was one of the strongest performers among the new shows, attracting 9.8 million viewers for its first episode. The show then attracted 9.6 million for its second episode, which is a pretty good audience retention level. Also positive is that the show stayed strong among the 18-49 demo (1.9 rating). Limitless stands a pretty good chance of renewal, though it is too early to call. It is distributed internationally by CBS Studios International, which has already licensed the show to the likes of Fox TV in Sweden and RTL CBS Entertainment – a pan-regional pay TV channel in Asia. 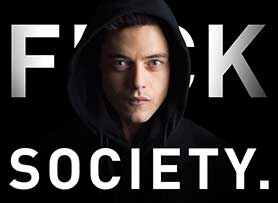 Mr Robot
USA Network was so pleased with the first episode of this hacking drama that it immediately ordered a second season. With the first run now over, Mr Robot seems to have found a cult audience and a decent level of critical acclaim (an IMDb rating of 9.0 makes it one of the best-received of this year’s new shows). One buyer impressed by the series is Amazon, which swooped in and secured streaming rights to the first season. However, Amazon is not yet in many territories, so there is still plenty of scope for international networks to buy Mr Robot. It would probably suit a pay TV or subscription VoD platform – though an edgy terrestrial channel might also find a post-22.00 slot for it. 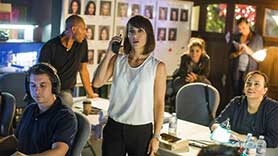 UnREAL
UnREAL aired on Lifetime this summer. Set against the backdrop of a fictional dating show, it focuses on flawed heroine Rachel Goldberg (Shiri Appleby), a young producer whose sole job is to manipulate relationships between contestants to get the outrageous footage demanded by her executive producer, Quinn King (Constance Zimmer). UnREAL didn’t debut very strongly but Lifetime’s decision to stream a number of episodes online gave the show a boost. The series finished its run as Lifetime’s most successful ever among younger viewers (part of the channel’s plan) and has already secured a second season. The show is distributed by A+E Studios International, which is bringing Appleby and Zimmer to Mipcom. It airs on Lifetime in the UK and has been licensed to streaming services such as Stan (Australia) and Lightbox (New Zealand). Some networks will be put off by the fact it parodies the TV entertainment business, but others will embrace its slick humour.

Heroes Reborn
This revival of the Heroes franchise did moderately well on its return. Having scored a 2.0 rating among 18-49s on its opening night, time-shifted viewing took it up to a 3.1 rating (Live+3). Nielsen’s figures have Heroes Reborn ranking as the fourth best launch out of 11 on the big four US networks last week. A 7.9 rating on IMDb is not spectacular, but it’s okay to start with. The show was simulcast in Canada on Global and started airing on Seven Network Australia on September 30. The original series is currently on Netflix. 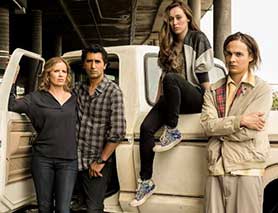 Fear The Walking Dead
You can understand the editorial and commercial reasons behind AMC’s decision to extend the world of The Walking Dead, but Fear The Walking Dead (FTWD) is not quite living up to the hype.  After a massive 10.1 million audience for episode one, it has since slumped significantly. The audience for episodes four and five was around the 6.5 million mark, which is good compared with other shows but not compared with its parent show. Season five of The Walking Dead averaged around 14.8 million. An IMDb rating of 7.8 suggests that the audience hasn’t really bought into FTWD – though there is time for that to change because AMC has already committed to a second season. Internationally, the show is airing on AMC Global where that channel is available (including territories in Europe, Latin America, Asia, Africa, and the Middle East). In Australia it is on FX. Hulu has picked up US streaming rights while Amazon streams FTWD in Germany and Austria. One interesting development is that AMC has also created a 16-part web series, Fear the Walking Dead: Flight 462, for its website (amc.com). One of the characters in the web series will be introduced in FTWD’s second season, which is a pretty cool piece of transmedia storytelling. 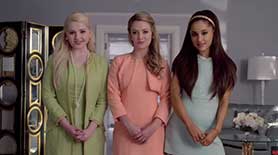 Scream Queens
There was a lot of prelaunch hype around Fox’s Scream Queens, an anthology comedy-horror series from Ryan Murphy (Glee) that makes heavy use of guest appearances by big stars (such as singer Ariana Grande). But the show hasn’t got off to a particularly strong start. Episodes one and two were shown as a two-hour special and attracted a modest 4.04 million viewers (1.7 rating among 18-49s). There was some improvement once time-shifted viewing for episode one was included, but the second episode’s audience of 3.76 million suggests Scream Queens hasn’t really managed to grip America’s imagination. Review site Rotten Tomatoes sums up the show: “Too tasteless for mainstream viewers and too silly for horror enthusiasts, Scream Queens fails to satisfy.” The series is distributed by Twentieth Century Fox Television Distribution, which has so far sold it to E4 in the UK, which is probably the right kind of home for it. Murphy’s involvement makes renewal a possibility, but Fox will want to see an upturn in the ratings to justify a new run. 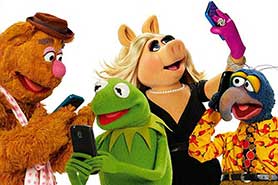 The Muppets
A week ago, we would have been lauding the performance of the latest Muppets revamp. But a disastrous ratings decline for episode two changes the picture somewhat. For episode one on ABC, The Muppets attracted nine million viewers. But for episode two the show was down 35% to 5.8 million. There was also a drop-off in 18-49 viewers. The decline is so significant that we’re going to need a few weeks to see where the show settles down. Nevertheless, The Muppets has a sufficiently strong following globally that international sales are bound to follow for Disney. Early buyers of the show include Sky1 in the UK. 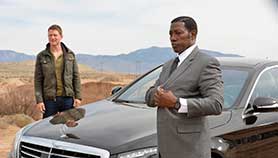 The Player
The Player, another new drama from NBC, got off to a slow start. The main problem seems to be an over-complicated premise, which involves a secret amoral organisation that bets on crimes before they are committed. The first episode attracted a modest 1.2 rating among 18-49s on its first night and a total viewership of 4.68 million (rising to seven million after three days). Nevertheless, Sony Pictures Television (SPT), which distributes The Player internationally, has been very quick to secure some deals for the show. Broadcasters that have signed up include TF1 France, RTL Germany, AXN Spain, Seven Australia, D-Smart Turkey and OSN in the Middle East. All told, SPT has sold the show to broadcasters operating in 105 territories (some deals are pan-regional). Sales have probably been helped by the fact that the The Player features Wesley Snipes, but the chances of a renewal already look slim. 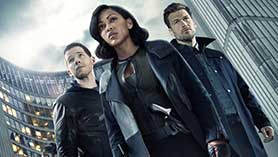 Minority Report
A spin-off from the Tom Cruise movie of the same name, Minority Report hasn’t started very well. Episode one attracted an underwhelming 3.1 million viewers (1.1 rating among 18-49s). Fox fought a rearguard action by pointing to episode one’s increase as a result of time-shifted viewing. But episode two’s audience of 2.56 million (0.9 rating among 18-49s) shows a downward trend that is not encouraging. With IMDb giving the show a low 6.1 rating, it will be a major surprise if Minority Report makes it to season two. That will clearly impact on the distribution strategy for the series.

Finally, a brief mention for the BBC in the UK, which has been running a superb series of feature-length dramas based on classic British literary works. While the dramas in questions didn’t always rate highly, they were excellently produced and provided a great showcase for why public service broadcasting matters.

The top-rating production was An Inspector Calls (5.8 million), which has a particularly high profile in the UK. Next came Lady Chatterley’s Lover (4.9 million), then Cider with Rosie (3.9 million) and finally The Go-Between (2.6 million). The latter, based on a novel by LP Hartley, is the least well known of the four works, so its lower ratings aren’t too much of a surprise. But it was a well-made drama. Overall, these four films were a job well done by the BBC.