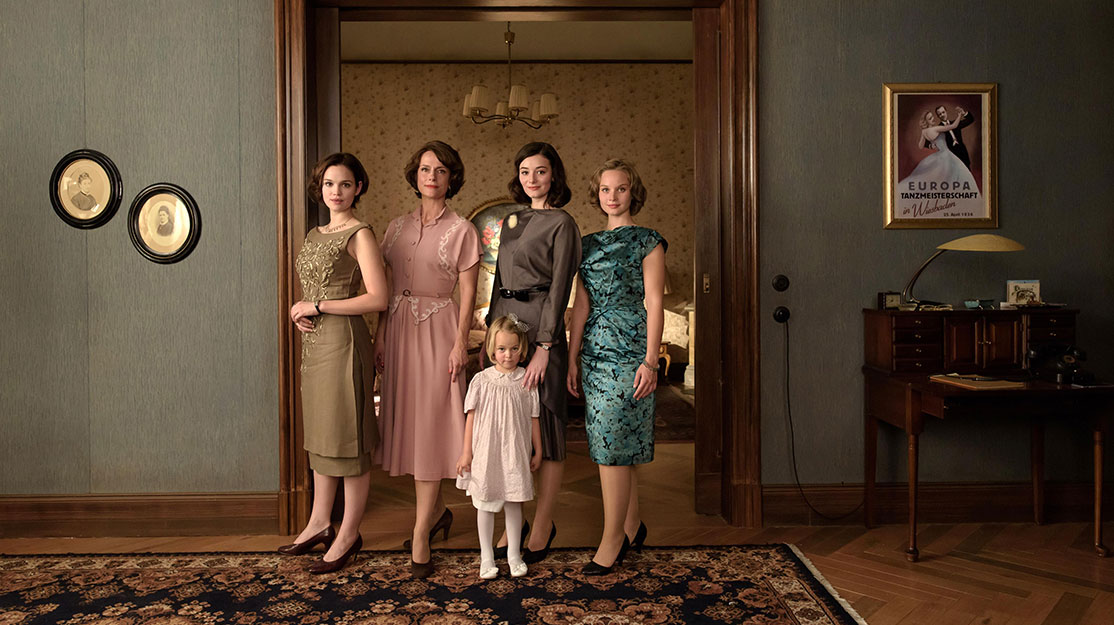 German writer Annette Hess tells DQ about period drama Ku’damm 56 and its upcoming sequel Ku’damm 59, her desire to create a series with strong female characters and why she enjoys writing about the past.

The origins of German period drama Ku’damm 56 make for an interesting play on the progression of writers within the country’s television industry. Annette Hess, who had created long-running series Weissensee, was demoralised at the lack of control she had over her own show. So for her next project, she carved out a role as a showrunner that meant she could be hands-on with the programne throughout its development and production.

Ku’damm 56, about three sisters finding their way in 1950s Berlin while under the watchful eye of their strict, socially conservative mother, first aired on ZDF in March 2016. Shown over three nights, it was watched by an average of six million people. Its sequel, Ku’damm 59, will debut on March 18 this year.

“Ku’damm 56 was the first time I was involved as a kind of showrunner,” Hess tells DQ. “It was on Weissensee that I did not have enough influence to give my opinion, and I didn’t like that very much. I was outside and it was always the director who was the last one to decide. I told my agent I wanted to have it another way next time.

“There’s a lot of work still to do, of course, because a lot of directors don’t like this development. But it had to be done because I know so many talented writers and they’re so frustrated after years [in television] and they’re going into literature. I also started [writing literature] myself and now I have to write a book!”

Hess puts the success of Ku’damm 56 down to the music and dancing at the centre of the coming-of-age story. “It’s one you can understand immediately if you have problems with your mother, even if your mother isn’t such a monster as Caterina.

“Older people were interested because it was about their youth. It was the youth of my parents, which is why I wrote it, because my mother told me lots of stories about her girlfriend, and these girls – Helga, Monika and Eva – are kind of real. And the younger ones are also interested to see where their mothers and grandmothers come from and how they lived.”

Set three years later, the sequel sees single mother Monika fight for custody of her daughter, as Caterina believes the little girl should live with Helga and her husband Wolfgang (August Wittgenstein), as a way to hide his secret homosexuality. Meanwhile, the careers of Monika and her dance partner Freddy (Trystan Pütter) pick up speed under the stewardship of Caterina’s management, while Monika must also confront her feelings for Joachim (Sabin Tambrea). Eva is also unhappy in her marriage to Professor Fassbender (Heino Ferch).

Like its predecessor, Ku’damm 59 is produced by UFA Fiction and distributed by ZDF Enterprises.

“We always had [a sequel] in mind if it was a success,” Hess admits. “You’re thinking about it in your meetings with the broadcaster and talking about what you could do. For me, it’s always difficult, if it’s a success, to make it even better. Of course, everyone’s expecting it to be better than Ku’damm 56. I told my husband, ‘What can I write?’ It was a long process. But on the other hand, I love to write characters and tell their lives. Now it’s even better than Ku’damm 56.

“I’m so overwhelmed by what I see [on set]. The actors are much more in their characters, the director is much more free this time and the stories are grown-up stories. Ku’damm 56 was more like a fairytale; Monika was an ugly duck who became a swan. Now they’re struggling and have conflicts with each other and their husbands and their mother. It’s not a coming-of-age story but really a drama, and with a lot of humour too.”

Taking to social media,  Hess says she enjoyed hearing from viewers who were willing Monika and potential love interest Joachim to marry. Monika rejected Joachim in Ku’damm 56 but he returns in the sequel.

“There are a lot of fans asking for marriage and happy endings between him and Monika so it’s wonderful to see all these Facebook posts,” the writer says. “It’s quite new that the writer has direct reaction to what you have written. They said after the first part it has to go on, they have to marry and I’m giving the fans this marriage but not in the way they are expecting. I really like to listen to viewers and fans and to react and give them more, but not in the way they are expecting.”

Ten years ago, Hess wrote a series called Die Frau vom Checkpoint Charlie (The Woman from Checkpoint Charlie), a TV movie for Arte based on the true story of a woman who is separated from her children while escaping 1980s East Germany. While it was a big success, Hess says she is now far removed from this “simple” kind of story that was made at a time when something like Ku’damm, with a cast of complex characters, would not have been produced. Now she’s fighting to bring more complicated females to the screen.

“Female movies are the more soapy movies and the others are crime stories, mostly with strong men, and women are prostitutes or drug addicts,” she says of the German industry. “I’m exaggerating but it’s a big issue for me because it’s a real problem. It’s a kind of regression. You can see it in the directors – 20% of directors are female, the same with writers, and these 20% are writing mostly the soapy stuff while men are writing the interesting projects. It’s not moving, so for me it’s now very important.

“In other series, women are just ornaments or they try to make one strong woman so nobody can say there isn’t one. It’s ridiculous sometimes. But they’re not really the sort of female characters I want to see. Orange is the New Black and The Crown are great series with fascinating female characters.”

Future series from Hess are likely to continue to live in the past, as per Weissensee and the Ku’damm shows. She’s now also writing an adaptation of Wir Kinder vom Bahnhof Zoo (The Children from Bahnhof Zoo), an autobiographical book by Christiane F, who Hess describes as “the most famous drug addict in the world.” The series is set in Berlin in the 1970s.

“For me, it’s easier to tell stories from a distance,” she says. “If I’m writing about my everyday life, I cannot choose what is important – I think everything is important. But if I have some distance, I can decide what is the essential story, what are the essential characters, and that’s the story I’m going to tell. But whether it’s in the 1950s or 1970s, it’s also about today because the conflicts are the same. It has to be a mirror of our time, otherwise it wouldn’t work with the audience. It’s just like something from a museum.”

Whether there will be a third instalment in the Ku’damm series set in 1962 remains to be seen, as Hess would have to deal with the Berlin Wall, which was built a year earlier. “I don’t like to write these things,” she adds. “We have seen it so many times, it’s not easy to find a new idea about it.”