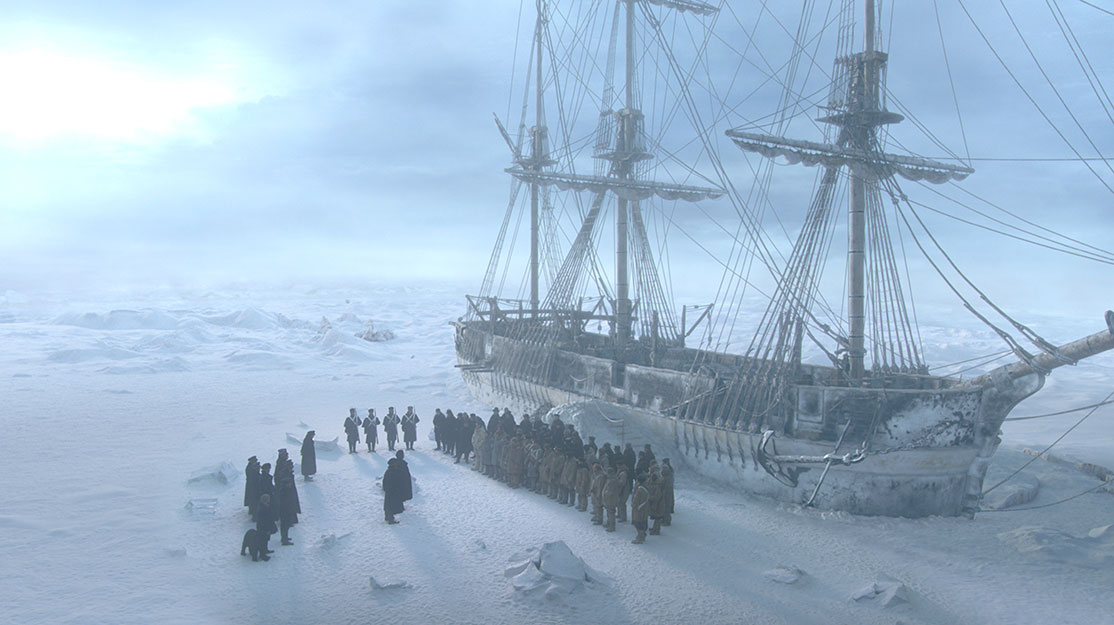 No one survived the Arctic expedition led by HMS Terror and HMS Erebus to chart the Northwest Passage, that much is certain. More than 100 men – officers and crew – died when their ships became ice-locked in the frozen waters, leaving them to fend for themselves in the inhospitable and unforgiving environment.

Inspired by this true story, and Dan Simmons’ book on the doomed exploratory voyage, US cable network AMC imagines those aboard the ships fighting for survival against the treacherous conditions, their fellow sailors and a mysterious predator in 10-part event series The Terror.

The drama stars Jared Harris (Mad Men) as Francis Crozier, captain of HMS Terror and second in command of the expedition behind Sir John Franklin (Game of Thrones’ Ciarán Hinds).

Kajganich had been “obsessed” by the real events behind the story and scored an advance copy of Simmons’ book, hoping to adapt it as a feature film. Looking back now, though, he admits it would have been “drastic” to cut so much from the story to ensure it fitted a two-hour running time.

“It’s such an amazing combination of character drama and genre, and you don’t get those projects very often,” he says. “Even in Hollywood, it’s rare a book this good and this spooky and wonderful and a weird mix of genres comes along. There are certainly things in the book that were unfilmmable but what we found is where there’s a will, there’s a way. Everything we wanted to shoot we found a way to do it. People came to this knowing it would exhaust them but it would be fun in the most enjoyable, aggressively creative way.”

But when the project crossed over to television, Kajganich knew he couldn’t do it on his own. “When I met Soo, I knew in 25 seconds this was the best I could hope for,” he says. Hugh jokes: “We got married knowing very little about one another but it worked. We missed the courtship.”

Working with four others in the writers room, they broke stories together and split up the episodes. But as present-day excavations uncovered more secrets about the fates of the Erebus and Terror, the scripts continued to evolve right up until they were committed to film. That meant the showrunners found themselves doing a lot of rewriting, long after the other writers had moved on to other projects.

Kajganich says: “We talked a lot about every character and when is the moment that they realised they’d stepped from a high adventure story into a horror movie. It’s different for every character and some characters never cross that line, either because they never see the world that way or they refuse to. And that speaks to the warmth of these people. They thought they were going to live, most of them until the very end. They brought with them their ingenuity, their humour, their humanity. We wanted those things to be more important than any plot demands of a horror show, so we wanted to make sure the characters were driving the genre elements of the show, that it didn’t get out of hand and start leading the characters around.

Directing three episodes is Edward Berger (Deutschland 83, Patrick Melrose), who says he was immediately fascinated by the script, which portrayed a world he knew nothing about.

“I read it and thought, ‘This is great. How in the hell do I do this?’” he admits. “I knew we would do everything in the studio and then to figure out how to make it was really difficult, challenging and scary.

“I remember in July 2016, we flew to Budapest and stood in this black-hole studio. This was where they were supposed to die and eat each other but there was nothing there. It’s just scary because you don’t know how it’s going to look.”

Meetings followed between his DOP Florian Hoffmeister, production designer Jonathan McKinstry and costume designer Annie Symons, after which Berger retreated to spend two months designing storyboards. Then when he returned to Budapest, the world of The Terror was starting to take shape.

“Suddenly there’s a ship in the studio and there’s ice all around it,” he says. “There’s 100 people sewing costumes and you suddenly realise it’s becoming a reality.”

Budapest is well regarded among filmmakers for its good crews, support system and tax breaks, but the location also held a special significance on The Terror, as it was also where executive producer Scott directed The Martian.

“The Martian is basically the same idea [as The Terror] – a guy on Mars, all shot in a studio, and we said OK, it worked for Mars, let’s do it for the Arctic,” says Berger, who describes Scott as the “godfather” of the series.

“He was the inspiration for a lot of things, starting with [1979 sci-fi classic] Alien. It’s a similar story to Alien – a movie that very much inspired this down to quotes or certain scenes. There’s a scene in the beginning where one of the sailors spits blood and so it’s a homage to Alien. So he’s the spiritual godfather for Dave, Soo and I for this in terms of story and script. But he was very hands off in production. He left us to it.”

The series, which airs outside the US in 28 territories on Amazon Prime Video, is presented with a desaturated, bluish look to heighten the sense of cold and loneliness felt by the sailors stranded in the Arctic. But early in filming during the Hungarian winter, relatively few effects were needed to portray the cold surroundings, owing to the frosty temperatures inside the studio.

“In the beginning it was freezing cold,” recalls Harris, who describes the crew as the “rock stars” of their day. “They saved themselves a lot of money because our breath was misting up as it would come out. Those ships looked amazing and each of the decks was its own separate set, on its own sound stage, and the ice stage looked amazing so it was exciting to be there. They would have shot in the Arctic if the cameras wouldn’t have frozen.

“We also had an understanding of the claustrophobia. You start to imagine they would have spent all this time in this one space, locked in the ice for a year-and-a-half but on board these ships for between five and seven years.

Menzies adds: “Often there was no acting needed because once you got a crew and all the actors in, it was absolutely jammed. And one of the things the creators of this show have done brilliantly is really evoking a lot of those details of what it was like to be close to each other, the physical realities. Imagine the smell! If we can take an audience some way into what that would have been like, it’s going to be a rich experience.”

That experience will be all the richer if viewers stick with the show through its entire run, with cast and crew highlighting the slow pace of the series, which focuses on the characters and their increasingly strained relationships as they come to terms with the perilous situation they find themselves in.

“The pacing of this show could not have existed five or 10 years ago, because we are standing on the shoulders of some great television that really has taught audiences to wait and you will be rewarded,” Hugh says. “The last three episodes, thankfully, AMC supported us so they’re longer than the traditional format and when you see them you’ll understand why. It’s a different experience. It almost feels like a standalone movie. It’s an epic.”

Menzies agrees. “I’m very excited by the slow-burn nature of what we’ve made,” he says. “It will reward attention and people staying in it – and I feel, story-wise, that reaches deeper places than if it’s too ‘surface’ and too quick and too cokey in its rhythms. But that’s the kind of storytelling I like so I tend to be drawn to those projects.”

Ultimately, Berger says The Terror is proof of what can happen when writers are allowed to dream. “What I learned from the American writing is almost anything you can imagine, anything you can write, you can also film,” he says. “Growing up in Germany, you’re limited in your resources. So these kinds of ideas you never dare to dream. You just shut them out of your mind. So that’s why when I read the first script I thought, ‘How am I going to do this? How do you shoot that?’ I’ve never read something like that in Germany. It’s not as liberated or free in terms of fantasy.”