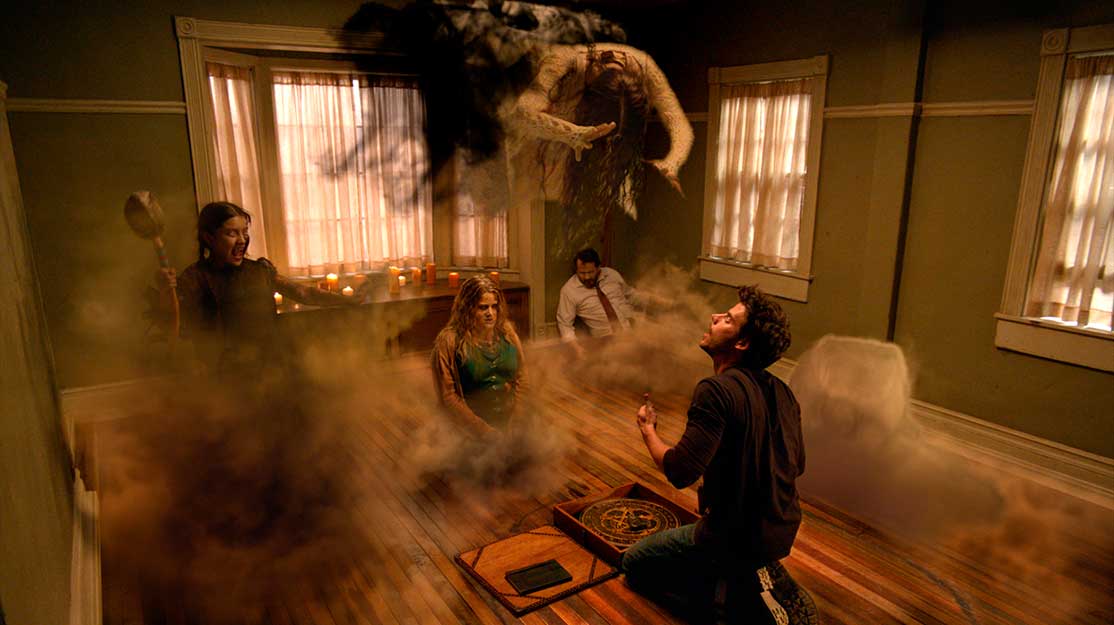 A small town serves as a sanctuary for a group of people with secrets to hide in supernatural mystery Midnight, Texas. DQ speaks to showrunner Monica Owusu-Breen about adapting Charlaine Harris’s novels and the show’s political parallels.

When the first novel in the Midnight, Texas series was published in May 2014, Donald Trump was still a year away from entering the race to succeed Barack Obama as US president.

Charlaine Harris’s Midnight Crossroad introduced the inhabitants of a derelict town with little to distinguish itself besides its quaint and quiet atmosphere. For someone looking for a place to hide, Midnight is the perfect location.

The paranormal saga sets Midnight up as a town where outsiders can find sanctuary from those who would otherwise seek to persecute them, and a sense of community among others with secrets of their own.

Three years on from that initial publication date, Harris has followed up her first book with sequels Day Shift and Night Shift, and Trump is now in the White House, making headlines for his anti-immigrant agenda and his attempts to withdraw funding from so-called sanctuary cities that limit their cooperation with national immigration laws, promoting themselves as safe havens for undocumented immigrants.

As such, the arrival of a television adaptation of Harris’s novels could not be more timely – and the show’s correlation with contemporary politics is not lost on series creator and showrunner Monica Owusu-Breen. At the heart of Midnight, Texas, she says, is “the idea of a town full of diverse people from all walks of life who find sanctuary in America and then fight the forces of evil together, respecting each other’s differences as strengths, not weaknesses. The whole thing has this metaphorical quality that was not intentional at the pilot stage but became super meaningful as the show progressed.”

US network NBC put Midnight, Texas into development in 2015 and ordered a pilot in January 2016. The show was picked up to series last May and the 10-part first season debuted last month. NBCUniversal International Distribution is selling the show worldwide, with Syfy in the UK among those to have picked up the supernatural drama.

Like the books, the series explores the eponymous remote town that is home to a vampire, a witch, an angel and an assassin – a haven for those who are different and have to hide from the outside world. However, the arrival of a powerful psychic and a murder from within threaten their tight-knit community.

Despite the long-running success of another series based on Harris’s novels – HBO’s True Blood – Midnight, Texas opened in the US to soft ratings of 3.6 million viewers. Perhaps that’s not surprising for a genre series far removed from the legal and medical procedurals that draw the biggest crowds to network television, particularly during the ratings-light summer season.

Owusu-Breen jokes that she checked with NBC executives to make sure they knew what they were getting when they ordered this “crazy” show. “When I read the books, I had a personal connection to it and there was also this crazy, madcap world of surprising beings,” she says. “Charlaine has this boundless imagination and there was a joy in that for me. There definitely were moments when I would look at look my NBC executive and say, ‘You guys want this? You’re sure, right?’ But it was so fun, weird and hopeful.”

In any other series, the characters that populate Midnight would most likely be the villains of the piece, but that’s part of the fun – particularly when recent arrival Manfred (played by François Arnaud), the aforementioned psychic, begins to discover who his new neighbours are.

“They all felt like they could have their own show,” Owusu-Breen says of Midnight’s inhabitants. “What you realise is these people come from really ugly pasts. Some of them have histories that are profoundly painful, so for them to come to Midnight and find sanctuary is really quite beautiful. While they start off as these fun, crazy characters, what got them to Midnight and those reveals really adds heart to them.”

As network television sticks to largely episodic fare amid the wave of serialised drama on cable and streaming platforms, Owusu-Breen remarks that with Midnight, Texas, she’s having her cake and eating it too. “I was on [Fox sci-fi drama] Fringe and our showrunner coined the phrase ‘Mythalone’ – a series of standalone episodes that add up to a whole story, like chapters in a book. Every episode is part of the greater myth of the story.

“In every episode, we’re following Manfred because he’s our hero. But we also explore one of the Midnighters in each episode, so by the end of the 10 instalments, you will understand who these people are and why they’re there. Then we have an overarching myth than will hopefully feel satisfying when you get to the end.”

Owusu-Breen was introduced to the world of Midnight, Texas when her agent sent her the books as a potential development project, and she says there were immediate parallels with her personal life. Her mother-in-law was a small-town psychic, while the showrunner would spend her summers as a child in a small Spanish town “in the middle of nowhere,” where everybody knew each other and their business.

“The novels have this oddly personal resonance for me, and as I continued to read the saga, I realised I loved these characters,” she admits. “The community of Midnight is so peculiar that I could see the story going on endlessly. So it felt so fertile for a TV writer to approach. What I loved, too, is that Charlaine has a very specific voice – she doesn’t shy away from being funny, she doesn’t shy away from being romantic, so those two things also made the show feel special for me. It’s very rare you find material that rich.

“TV is a character’s medium; you’re asking people to tune in every week to see the same people, so if they’re not interesting… she creates these wildly interesting characters. They’re strange and they surprise you at every turn, but they’re fun and funny and obviously human despite being supernatural.”

Season one blends the murder mystery of Harris’s first novel with the supernatural elements of book three, with Owusu-Breen describing the books as a roadmap for the series. A major element of the show was putting Manfred front and centre, serving ostensibly as the series lead before making way for the rest of the ensemble.

“In the book he was less of a driving force but we’re following him as the newcomer into the town,” the showrunner explains. “He’s the outsider and he’s the one who becomes an insider, so he has a different role than he plays in the books.”

Midnight, Texas is Owusu-Breen’s first solo showrunning job, having previously shared the role on ABC drama Brothers & Sisters. So when setting up her writers room, she was keen to bring with her a lesson she had learned on her previous job writing for ABC’s Agents of S.H.I.E.L.D. – a “no assholes” policy.

“What that meant in practice is we had a delightful working environment where people were competitive and generous with ideas and could disagree without getting mean,” she reveals. “So I really took that to heart, because it didn’t hinder the creativity. It actually made it a more positive experience because you spend 10 hours in a room with the same people. So for me it was important to get writers who engage in the spirit of this material, which is funny and a little wacky, and also at its core it’s got sentiment and heart. You don’t want to get mired in cynicism, so it was a very fun writers room. The stories weren’t easy to break because they’re crazy, but I had a wonderful writing staff. We laid out Charlaine’s tentpoles [from the books], deciding what we wanted at the beginning, middle and end of the season, and then we just built stories around those.”

By the end of the first season, Midnight, Texas becomes a “repulsively large show” as a story that begins with a murder mystery ends with a ‘Hellmouth’ opening in the middle of the town.

“Thankfully we had directors, a line producer and creatives who just jumped at the challenge, so when we needed a lot of dead bodies, they’d come up with some ideas,” the showrunner says. “It was very funny how everyone rallied around everything. Some episodes are a little darker and emotional, while some are wildly fantastical and have a ton of CGI.  think we kept everyone on their toes but, at the end of the day, everyone had a really good time reaching for the stars.

“We close up the story of the first season and then open up a possible world for the second season. I try not to get my hopes up [about winning a second season renewal] but book two is there and I’ve got ideas I’m playing with. I’m just going to enjoy season one and see how the rest of the world likes it.”

Should political events in the US continue on their current trajectory, Midnight, Texas could prove to be a suitably diverting sanctuary for viewers to take cover from current affairs.