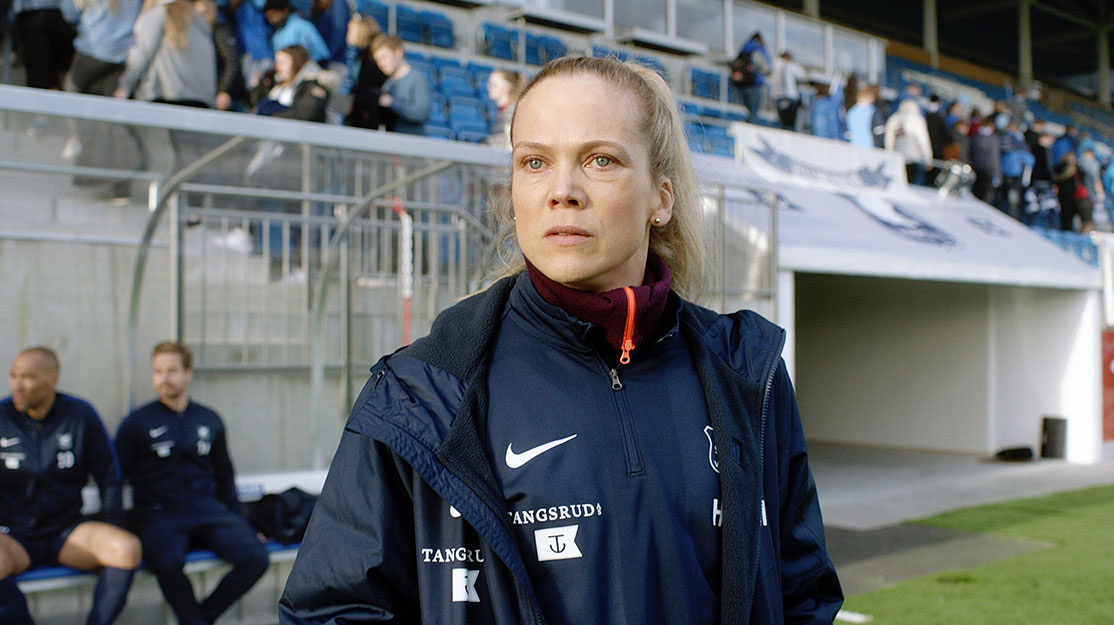 Former professional footballer John Carew teams up with Ane Dahl Torp to star in Norwegian drama Heimebane (Home Ground). They join the creative team behind the project to discuss the series, which centres on an ambitious female coach breaking into the men’s game.

Ane Dahl Torp is one of the most famous actors in Norway, having starred in series such as Kodenavn Hunter (Code Name Hunter) and Okkupert (Occupied). But she nearly turned down the lead role in local drama Heimebane (Home Ground).

She was in line to play Helena Mikkelsen, the coach of a successful women’s football team who leaves her job to become the first female coach of a Norwegian top-division men’s side. Ambitious and determined, Helena was drawn as a character willing to put a few noses out of joint to prove that women are just as good as men. To some, she wasn’t very nice.

Then in between casting meetings, the scripts were changed and Helena was rewritten to be more likeable. In turn, she was more deferential in the way she spoke, a move Torp says “totally ruined” the character.

“I didn’t know if they were going to offer me the part but I didn’t want it anymore. They ruined my dream, which is not so important, but more importantly they ruined the wonderful character for the audience. When you have a character I believe could really have a say and an impact, they killed her. So it was terrible.”

However, it was Torp’s reaction that earned her the part and forced the production to rethink the changes and revert to the original characterisation of Helena.

“When I came up with the idea, I thought we needed a woman who was going to go into this club and say, ‘I know you don’t believe me because I’m a woman but I’m the right person for this job.’ That was a key scene in the first episode, and that also informed a lot about her character,” series creator Johan Fasting explains. “She needs to be driven, ambitious and not take any compromises.

“But if you write a character like that, some people reading won’t like her because she’s unlikeable in many respects. So many of the first feedbacks we got on the scripts were she’s not likeable and you should make her more likeable. That didn’t sound like the show we were making but we tried this and softened her. It never felt right and luckily when we were casting, Ane came in and said, ‘This is bullshit, I don’t want to do this.’ We thought, ‘She’s right, what are we doing?’ We went back and said, ‘This is the character, and if that’s not the character, that’s not the show.’ And we were allowed to make the show we wanted to make.”

In the series, viewers follow Helena’s journey into a man’s world where she is not respected or listened to and attempts to overcome the ingrained bias against her.

The biggest challenge for Torp, however, was to throw herself into the world of football, as she admits she wasn’t previously a fan. To help her become immersed in the sport, she spent a lot of time at her local club, Vålerenga IF, where she would spend days watching training and talking to the players and staff – even walking out of the tunnel with the players when they played a pre-season friendly against Manchester United last summer.

“It was really fun to dive into a new universe because so many people are interested in it,” she says. “And where I live, football is a very big part of the culture. My husband is also a fan of the local team and when you walk around everybody has these flags outside. I’ve hated it but now I have the supporters’ gear. It’s definitely a job to get to love football when you don’t.”

Torp’s co-star John Carew is no stranger to football, having played professionally in Norway, Spain, Italy, Turkey, France and the UK across a 15-year career that saw him make more than 90 appearances for Norway’s national team. So was he wary of taking his first major acting role in a drama about a world he knows more intimately than most?

“It’s much more than about football,” he says of the 10-part series, which is coproduced by Motlys and public broadcaster NRK and distributed by DR Sales. “It’s more about my personal life and my story within the story, which makes the most impact for me.”

Carew plays Michael Ellingsen, a player who is facing up to the end of his career and the issues that come with it, such as his ageing body and the fact he is no longer the darling of the dressing room, with younger superstars fighting for the limelight.

“He has a lot of things to deal with but if I can’t do this, I should forget about my acting career,” he says. “I was in the changing room every day for 20 years, and every year there were one or two players who were at the end of their career. I was always seeing how they would deal with certain things that changed in their life. I have a lot of football friends who couldn’t deal with it and ended up with alcohol and drug problems, no money left and broken marriages. And it’s all related to not being able to cope. So it was very possible for me to put myself in this situation.”

There are no aliens, time travel or high-concept elements to the series, but Torp still describes Heimebane as a science-fiction series, as the central premise – a woman leading a men’s football team – is yet to happen in the real world.

“It can happen at any time but today it’s science fiction,” she says. “Also it’s very rare to see a female character in film or television who has professional problems and not personal problems. You hardly see that in fiction and it’s very important for the audience to see this.”

Development on Heimebane first began in 2014, with filming taking place last year. But when executive producer Yngve Sæther first approached producer Vilje Kathrine Hagen and Fasting about making a series about a football club and its coach, they were both hesitant.

“We love Friday Night Lights and we’re not going to do it better than that, so why do it?” says Hagen of his initial reaction, referring to the seminal NBC series about a high-school American football team. But as a writer, Fasting has always put women in the lead so they started to imagine a football series with a female coach in charge.

“Then it suddenly became an interesting story,” Hagen adds. “I’m not interested in football at all so, for me, this is not a show about football. It’s about a woman going into a man’s world. Football is an interesting setting because I feel the development of female coaches is so far behind. So if we wanted to tell this story, it was perfect to put it into a football arena.”

Fasting put together a traditional writers room to flesh out the season, bringing together three other writers and a couple of consultants to help break down the plotlines. He would then write through each script before filming began.

He also worked alongside lead director Arild Andresen, who shot the first two episodes, to set the style of the series, which they agreed should be authentic and visceral, with lots of energy.

“What’s strong about Johan’s writing is not only that he writes great dialogue, but he’s quite selective about his descriptions so that they feel relevant and inspiring and give me ideas,” Andresen says. “He writes in a very visual way but he’s very precise and very selective, so what’s in the script matters, which you can tell as a reader.”

Filming took place both in the studio and on location in Norway capital Oslo, and the town of Ulsteinvik in the West, picked both for its stunning location among the fjords, surrounded by mountains, and its inhabitants’ passion for football. Match scenes were filmed at Ulsteinvik’s stadium and authenticity was particularly important as the show was set inside the real Norwegian Premier League, using real clubs and real players, though the club led by Torp’s Helena is fictional.

“There are so many expectations about how to show football in a believable way,” Andresen adds. “People are so used to watching games on television, so we had to invent our own language and make it character-driven more than sports-driven. It’s a lot about what you’re not showing and what you’re focusing on, and which story about which characters you’re telling at that moment. The football pitch is the stage where this specific story is taking place.”

The stage is now set for a second season, which was ordered by broadcaster NRK before season one debuted in March. Season two is already lined up for a January 2019 debut.

“The world [of this show] lends itself really well to several seasons,” Fasting concludes. “Every season would just follow a new football season and there are millions of stories – you can never run out of inspirational stories. I could just keep going.”